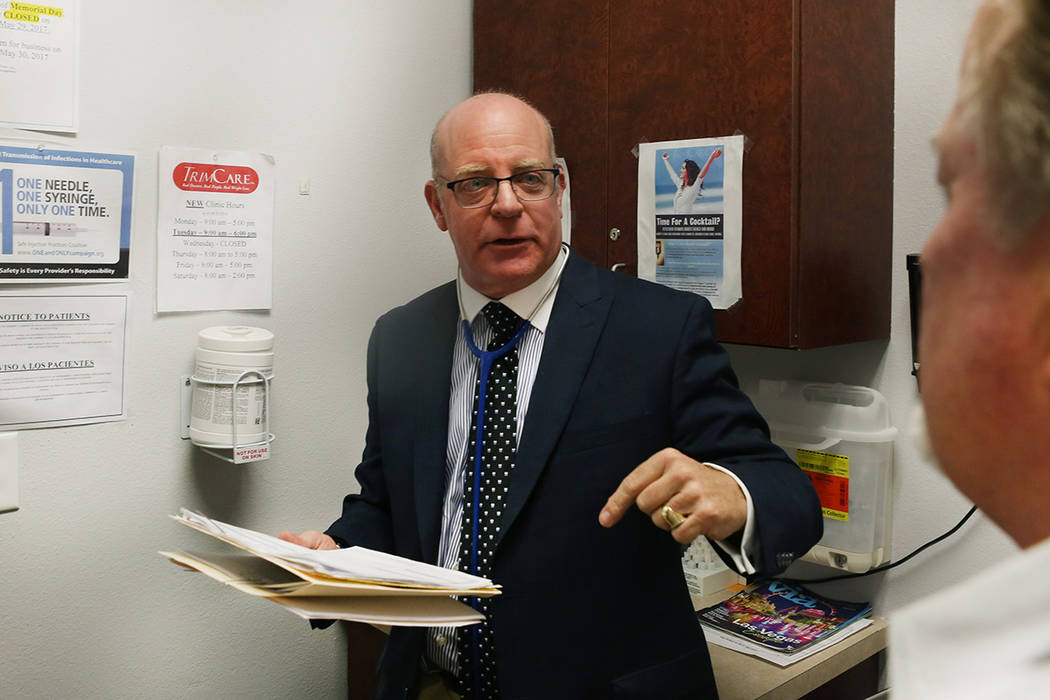 A Las Vegas doctor accused of improperly accessing the prescription records of Oct. 1 gunman Stephen Paddock will invoke his Fifth Amendment protection against self-incrimination at a state Pharmacy Board disciplinary hearing next month, his attorney said Tuesday.

Dr. Ivan Goldsmith, a weight loss specialist, is accused of using his access to the state’s Prescription Monitoring Program in an “incompetent, unskillful or negligent manner” by looking up Paddock’s patient profile on five occasions, according to a board complaint.

Paddock,who carried out the Oct. 1 mass shooting from a Mandalay Bay suite, was not a patient of Goldsmith’s.

The doctor could face fines and suspension or revocation of his prescribing license if the board finds him in violation of the federal Health Insurance Portability and Accountability Act (HIPAA), which protects patient data.

According to the complaint, Goldsmith looked up Paddock’s prescription information five times between the morning of Oct. 2 and the afternoon of Oct. 3.

At 9 p.m. on Oct. 3, the Las Vegas Review-Journal published an exclusive report which said Paddock was prescribed diazepam, an anti-anxiety drug better known as Valium. The report cited the Nevada Prescription Monitoring Program as the source of the records.

The board accused Goldsmith of “disclosing or allowing to be disclosed to the press” Paddock’s prescription data. The board’s co-counsel, Brett Kandt, said Goldsmith was the only provider who was able to access Paddock’s patient profile after his death.

Paul Harasim, the former Review-Journal reporter who broke the story on Paddock’s prescriptions, consistently declined to reveal his source.

“This doctor was trying to do it in public interest,” Harasim said of his source’s motivation.

Two other medical practitioners — a prescriber and a pharmacist — tried to access the records after the Review-Journal’s story was published but were unsuccessful because the board had locked Paddock’s profile, board co-counsel Paul Edwards said.

Both received letters of reprimand for attempting the unlawful act, Kandt said.

Goldsmith’s cellphone was not working Tuesday afternoon, and he could not be reached for comment.

His attorney, E. Brent Bryson, would not confirm whether Goldsmith accessed Paddock’s records but called the board’s actions “a witch hunt.”

“I believe that there’s a vendetta against Dr. Goldsmith and doctors in general at this particular time,” Bryson said. “Doctors are under high scrutiny having to do with … prescribing and obtaining medical records of that nature.”

The board removed Goldsmith’s internet access to the prescription database, prompting Goldsmith to file a petition with the Clark County District Court in October seeking to have his account reinstated.

The petition was denied by a court order one month later that noted that Goldsmith could still access the database legally by using pharmacy board staff as intermediaries.

Bryson said the Clark County district attorney’s office in an Aug. 15 letter declined to press criminal charges against Goldsmith, but he would not provide a copy of that letter. The DA’s office could not be reached for comment Tuesday afternoon.

Goldsmith has since left Las Vegas for Florida, where he is licensed to practice medicine, to pursue work in finance with a relative, according to Bryson. But he’s scheduled to appear at the board’s regularly scheduled meeting on Sept. 5 and intends to invoke the Fifth Amendment, his attorney said.

Goldsmith’s medical license is listed as active on the Nevada State Board of Medical Examiners’ online portal.