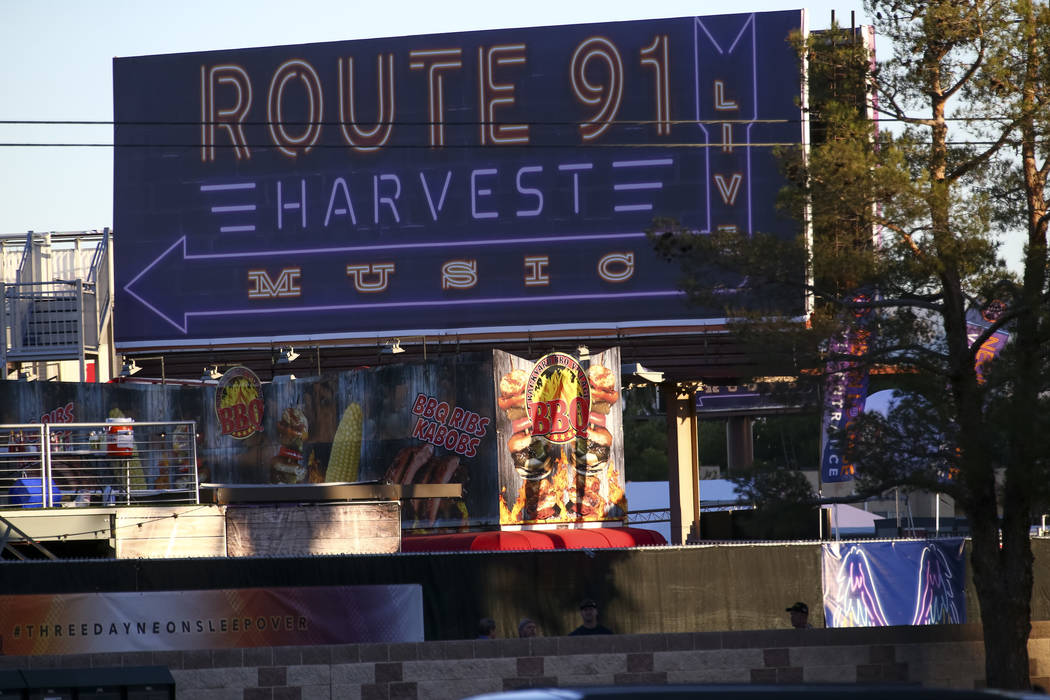 The records, which amounted to about 60 GB of data, consisted of three videos: one filmed from the sky on Oct. 2 and two filmed from separate, fixed positions on the Strip between Oct. 1 and Oct. 2. None of the videos contained audio.

About 80 police surveillance cameras exist on the Strip, according to a Clark County spokesman.

The southeast corner camera recorded the first hint of trouble just before 10:09 p.m. on Oct. 1, about four minutes after the shooting started. A Metro SUV can be seen speeding south through the intersection — toward the festival venue — with its lights flashing.

Seconds later, three more patrol vehicles, also headed south, race through the frame, followed by the first of many ambulances.

Over the next two hours, the camera panned toward Mandalay Bay, which the gunman used as a vantage point. That footage shows people running across the pedestrian bridge from Tropicana Las Vegas toward the Excalibur and along the sidewalk leading north from the festival grounds.

When the camera peers east down Tropicana Avenue, ambulance after ambulance — sometimes three in a row — can be seen racing east, lights flashing. Occasionally an ambulance heads the other way, hugging the center median to avoid colliding head-on with the eastbound emergency traffic.

The northwest corner camera shows a similar surge in emergency vehicles shortly after the shooting, though the video is blurrier.

The aerial footage of the mass shooting scene came from a Metro vendor, AviSight, which operates drone and manned-airplane cameras, police said Wednesday. The footage was filmed between 12:24 a.m. and 7 a.m. on Oct. 2.

Metro hires AviSight by request, police spokesman Sgt. Jeff Clark said. The department previously hired AviSight to film the Strip on fight nights and during New Year’s Eve celebrations. Metro lawyers have said in court that the department fulfilled no purchase orders or no-bid contracts in connection with the Oct. 1 investigation.

It’s unclear if AviSight was hired to film the mass shooting scene for a specific purpose. At times, the sometimes-shaky aerial footage switches from regular vision to night vision to infrared. An AviSight official declined to comment Wednesday.

In the early hours of Oct. 2, no traffic can be seen on the Strip in the aerial footage, aside from the occasional police motorcycle or cruiser. Instead, parked patrol cars line the perimeter of the Route 91 venue, their lights flashing.

The silent aerial footage also pans to Mandalay Bay, sometimes zooming in, then backing out. A few people can be seen walking within the festival grounds, which was left littered with personal belongings. The shooting left 58 concertgoers dead, and many of those victims died at the scene.

It’s unclear when Metro will release its next batch of Oct. 1 records, which could include 911 calls, body camera footage and additional surveillance footage from the mass shooting.

For more than six months, the department fought the release of the records, which the Las Vegas Review-Journal and other media organizations sued for in the days after the tragedy.

Last month, a Nevada Supreme Court decision compelled the department to begin handing over the records. In response, Metro released its first batch at the beginning of the month.