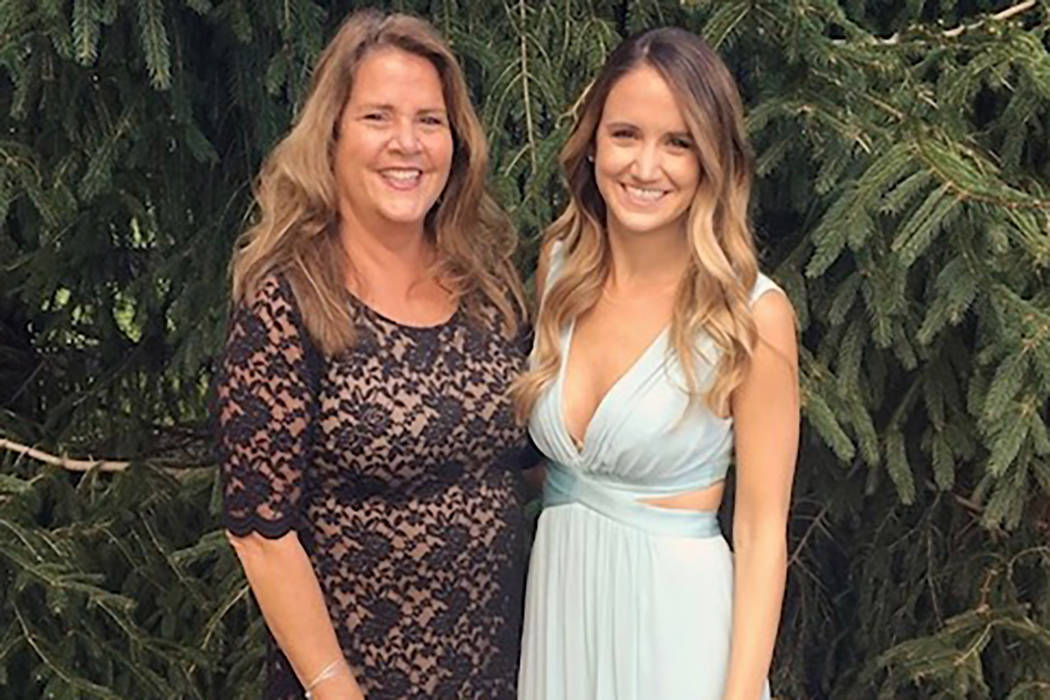 Tina Frost and her mother, Mary Moreland, in a photo taken in Maryland about two weeks before the shooting. (Courtesy) 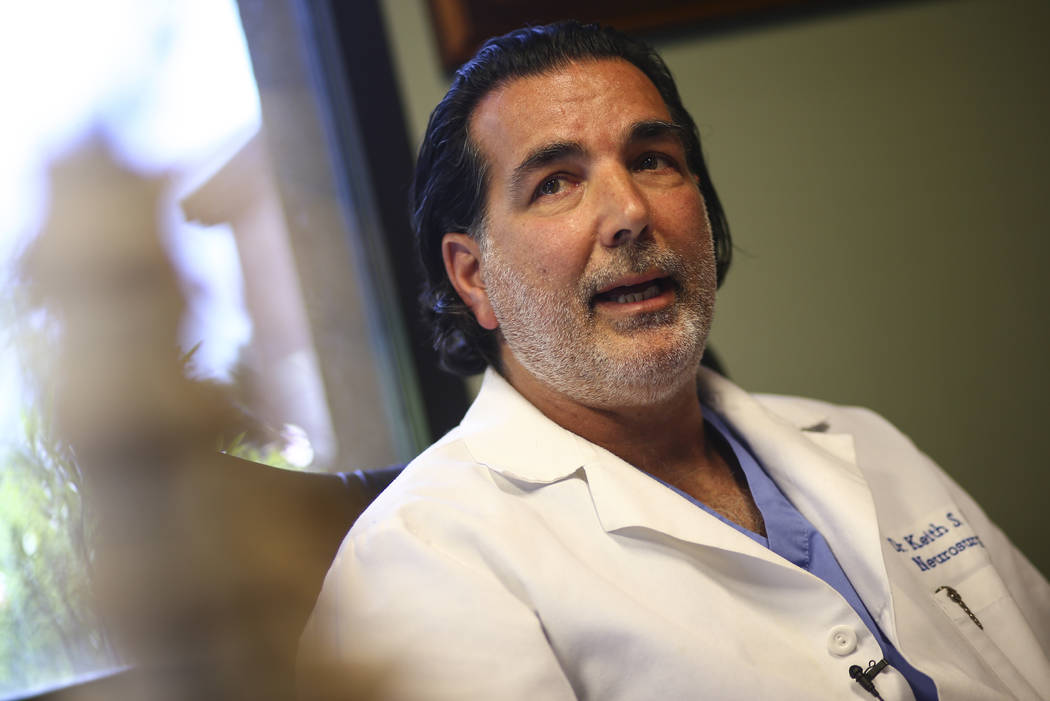 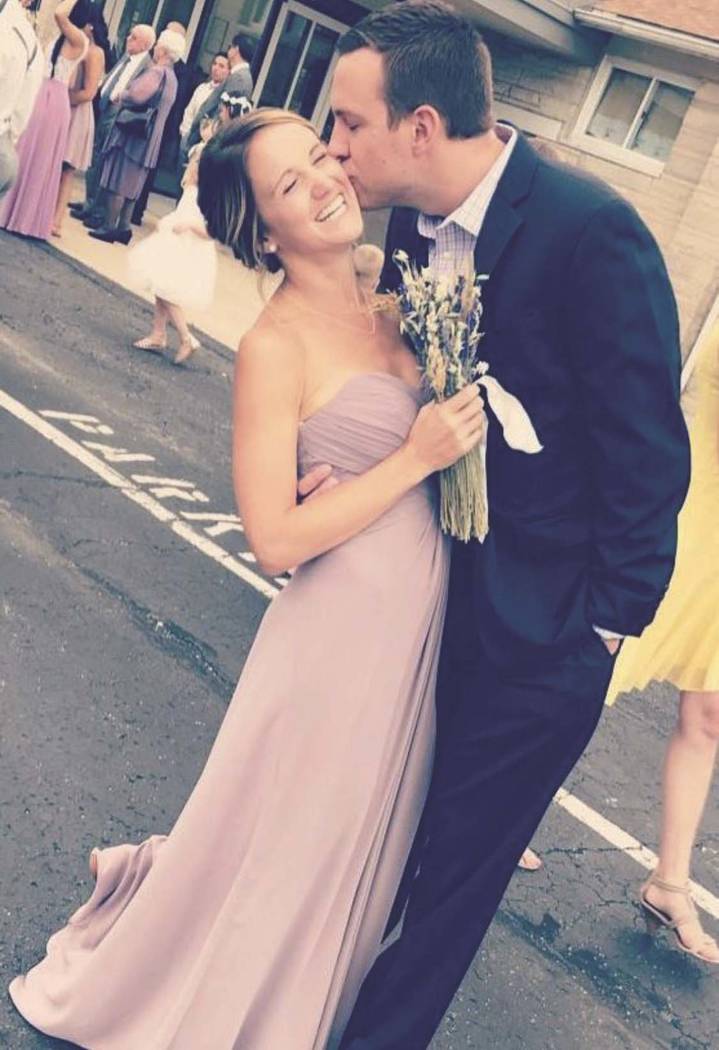 After the grimmest news came big glimmers of hope for Tina Frost.

When she was shot in the head Oct. 1 during the mass shooting at the Route 91 Harvest festival, her future looked grim. Before she entered surgery, her doctor warned the mortality rate for people shot in the head is about 90 percent.

But the 27-year-old Maryland native and San Diego transplant woke up on Thursday from her weeklong medically induced coma. And by Friday, she was out of bed and taking her first few steps since the shooting.

On Saturday morning, Mary Moreland told the Las Vegas Review-Journal that her daughter had taken three steps to a chair and another three back into her hospital bed. Frost’s grandmother Carlene Printy, who lives about 40 minutes outside of Baltimore, said Frost has made progress.

“She sure is a fighter,” Printy said by telephone Saturday. “She was even breathing on her own for a few hours.”

Frost landed in Sunrise Hospital and Medical Center’s intensive care unit after a single bullet from the relentless gunfire raining down on the Strip’s south end entered her right eye and damaged her brain.

She spent the next three hours that night in surgery.

Dr. Keith Blum said it wasn’t until they were in the operating room that he could see the extent of the damage — how the bullet shattered bones in the front of Frost’s skull and forehead, injuring the frontal lobes of her brain.

It was touch and go for a while during the extensive surgery, Blum said, but she pulled through.

And then, for a week, she slept.

“We had her on heavy doses of medication while we monitored her intracranial pressure,” Blum said. “But she’s awake, and I always had a feeling she would move toward recovery.”

Blum and the ophthalmologic surgeon who assisted on Frost’s surgery couldn’t save her right eye. But looking back on the surgery Saturday morning, Blum told the Las Vegas Review-Journal his patient’s eye injury may have helped prevent secondary injuries.

Because Frost’s skull shattered when she was shot, her brain had room to swell. The extra room for Frost’s brain to expand immediately after suffering from a gunshot wound isn’t common, Blum said.

“It’s quite miraculous that her injury at one point could have taken her life,” he said. “But instead, the way the injury happened kind of helped save her.”

And to Blum’s surprise on Thursday, when Frost woke up from her coma, the vision in her left eye hadn’t been destroyed.

“I showed her two fingers and she responded,” he said, putting his index and middle fingers up to demonstrate. “It’s amazing that she can still see.”

Not long after she took her first steps on Friday, Blum cleared his patient to go back to her hometown. On Saturday, more than 2,400 miles away, doctors at Johns Hopkins University in Baltimore were preparing for Frost’s arrival.

“It’s not about trying to find the best hospital to take care of her,” the neurosurgeon said. “What she needs is her community and family, and that’s where her support system is.”

Blum expects Frost to be airlifted to Hopkins as early as Sunday morning.

“She grew up here so she has an amazing support circle,” Printy said. “Tina is so loved.”

In the days following the shooting, Frost’s family from Maryland, Florida, Oregon and New York flew to her bedside in Las Vegas, where her mother, father and boyfriend have been taking turns staying through the night with her.

“She’s the kind of person who will do well because she has a supportive community behind her,” Blum said.

It’s unclear how many more surgeries Frost will face, but she will have to go back under the knife to repair her facial and eye areas.

“It’s not over yet,” Printy said, letting out a long sigh. “She’s awake, but she still needs to survive her next surgeries.”

Down the road, after the surgeries, Blum said possible infections caused by the bullet fragments left behind in her brain could lead to further complications.

Because such tiny fragments were scattered throughout the organ on impact, Blum said trying to remove every piece of the bullet during surgery “would not have been feasible.”

“This concern, in particular, may require more surgery,” he said. “But let’s hope not.”

Moving in the right direction

From the beginning, Frost has given her doctors and family reason to hope for a full recovery.

“She was giving us signs,” Blum said. “Even at the time of the surgery, she was moving and there didn’t seem to be a lot of brain swelling.”

Since awakening from the coma, the swelling in Frost’s face has subsided and Blum said her strength “seems to be symmetric on both sides.”

The neurosurgeon is hopeful for a reunion down the road.

“(Tina’s) mom will keep me posted until we meet again,” he said. “Tina’s doing really great and I won’t keep her here just to see her progress. But I think if she stayed, we’d be watching her walk out of this hospital in the next four days or so.”