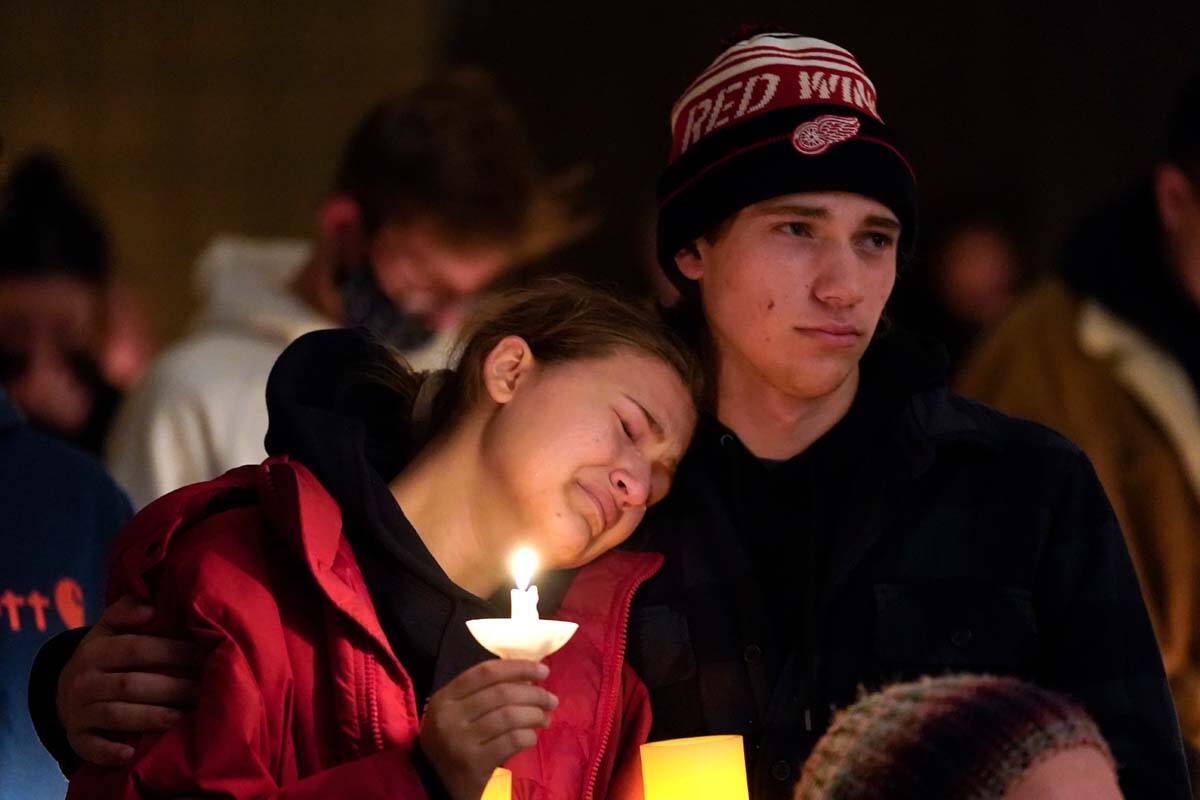 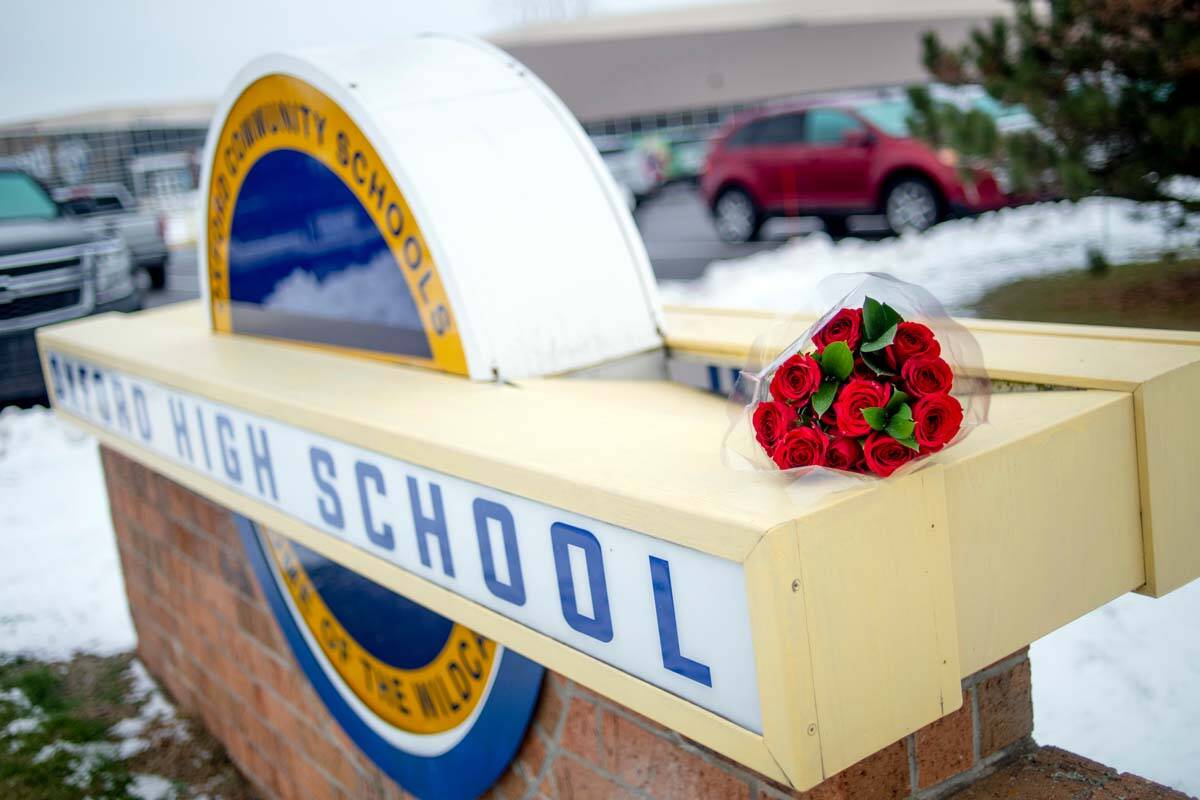 A bouquet of roses sits on a sign outside of Oxford High School on the day after the school shooting in Oxford, Mich. Wednesday, Dec. 1, 2021. A 15-year-old sophomore opened fire at the school, killing several students and wounding multiple other people, including a teacher. (Jake May/The Flint Journal via AP) 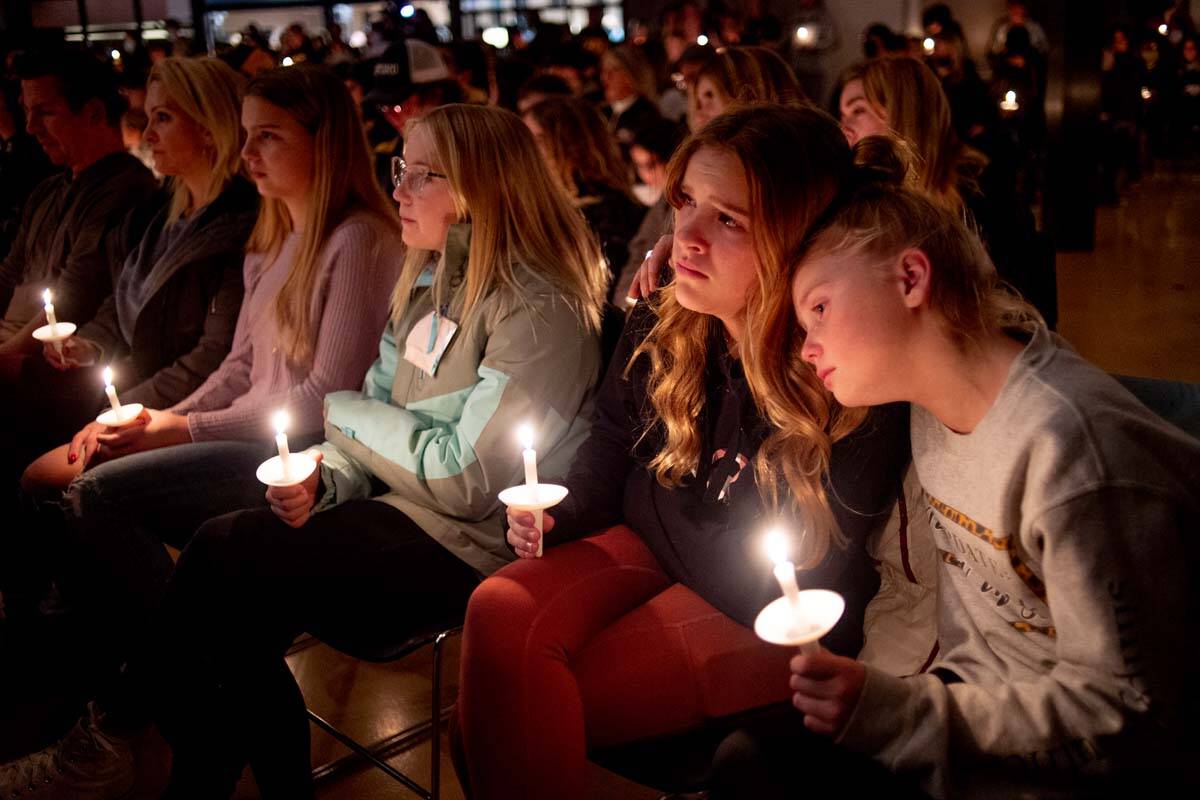 Emerson Miller, right, leans on her friend Joselyn's shoulder as they listen to Jessi Holt, pastor at LakePoint Community Church, during a prayer vigil at the church after the Oxford High School school shooting, Tuesday, Nov. 30, 2021, in Oxford, Mich. (Jake May/The Flint Journal via AP)

OXFORD TOWNSHIP, Mich. — A 15-year-old boy was charged with murder and terrorism for a shooting that killed four fellow students and injured others at a Michigan high school, authorities said Wednesday, revealing that his parents were summoned just a few hours before the bloodshed.

No motive was offered by Oakland County authorities, a day after violence at Oxford High School, roughly 30 miles north of Detroit. But prosecutor Karen McDonald said the shooting was premeditated, based on a “mountain of digital evidence” collected by police.

“This was not just an impulsive act,” McDonald said.

Indeed, sheriff’s Lt. Tim Willis told a judge that Ethan Crumbley recorded a video the night before the violence in which he discussed killing students.

Crumbley was charged as an adult with murder, attempted murder, terrorism causing death and gun crimes. During his arraignment, he replied, “Yes, I do,” when asked if he understood the charges. Defense attorney Scott Kozak entered a plea of not guilty.

“He deliberately brought the handgun that day with the intent to murder as many students as he could,” assistant prosecutor Marc Keast said in successfully arguing for no bail and a transfer to jail from a juvenile facility.

Earlier, Sheriff Mike Bouchard told reporters that Crumbley’s parents were called to the school Tuesday “for behavior in the classroom that was concerning.” The teen remained in school, and the shooting occurred a few hours later.

Keast said in court that Crumbley entered a bathroom with a backpack and came out holding a semi-automatic handgun, firing at students while moving down the hallway. The four students who were killed were identified as 16-year-old Tate Myre, 14-year-old Hana St. Juliana, 17-year-old Madisyn Baldwin and 17-year-old Justin Shilling.

Bouchard didn’t offer details about what had troubled school officials. He said investigators believe the gun was already in school.

“There is nothing that he could have faced that would warrant senseless, absolutely brutal violence on other kids,” the sheriff said.

Deputies rushed to the school around lunchtime Tuesday and arrested Crumbley in a hallway within minutes of the shooting. His father bought the 9 mm Sig Sauer gun last week, according to the sheriff.

McDonald said charges were being considered against the parents.

“Owning a gun means securing it properly and locking it and keeping the ammunition separate,” she said.

The shooting should be a wake-up call for new gun laws in a country that has become “desensitized to school shootings,” McDonald told reporters.

“We have to do better,” the prosecutor said without offering specific changes. “How many times does this have to happen? How many times?”

“What about all the children who ran, screaming, hiding under desks? … Those are victims, too, and so are their families and so is the community,” McDonald said.

Video posted on social media showed students rushing to get out of first-floor classroom windows rather than open a door to someone who claimed to be a police officer. The sheriff said he likely was a detective.

After the attack, authorities learned of social media posts about threats of a shooting at the roughly 1,700-student school. The sheriff stressed how crucial it is for such tips to be sent to authorities, while also cautioning against spreading social media rumors before a full investigation.

Isabel Flores, a 15-year-old ninth grader, told Detroit television station WJBK that she and other students heard gunshots and saw another student bleeding from the face. They then ran from the area through the rear of the school, she said.

“This couldn’t be just random,” she said.

Bryant said he had heard vague threats “for a long time now” about plans for a shooting.