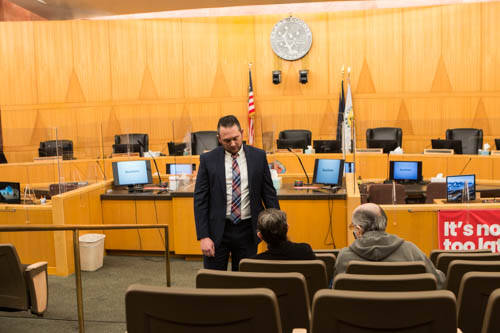 Attorney Michael Troiano consults with Allan Williams and Sharon Williams on Monday, Jan. 24, 2022, during a fact-finding review of the death of her son, William Thomas Holt Jr., who was shot and killed by Las Vegas police after he fired at them on May 4. (Ricardo Torres-Cortez/Las Vegas Review-Journal) 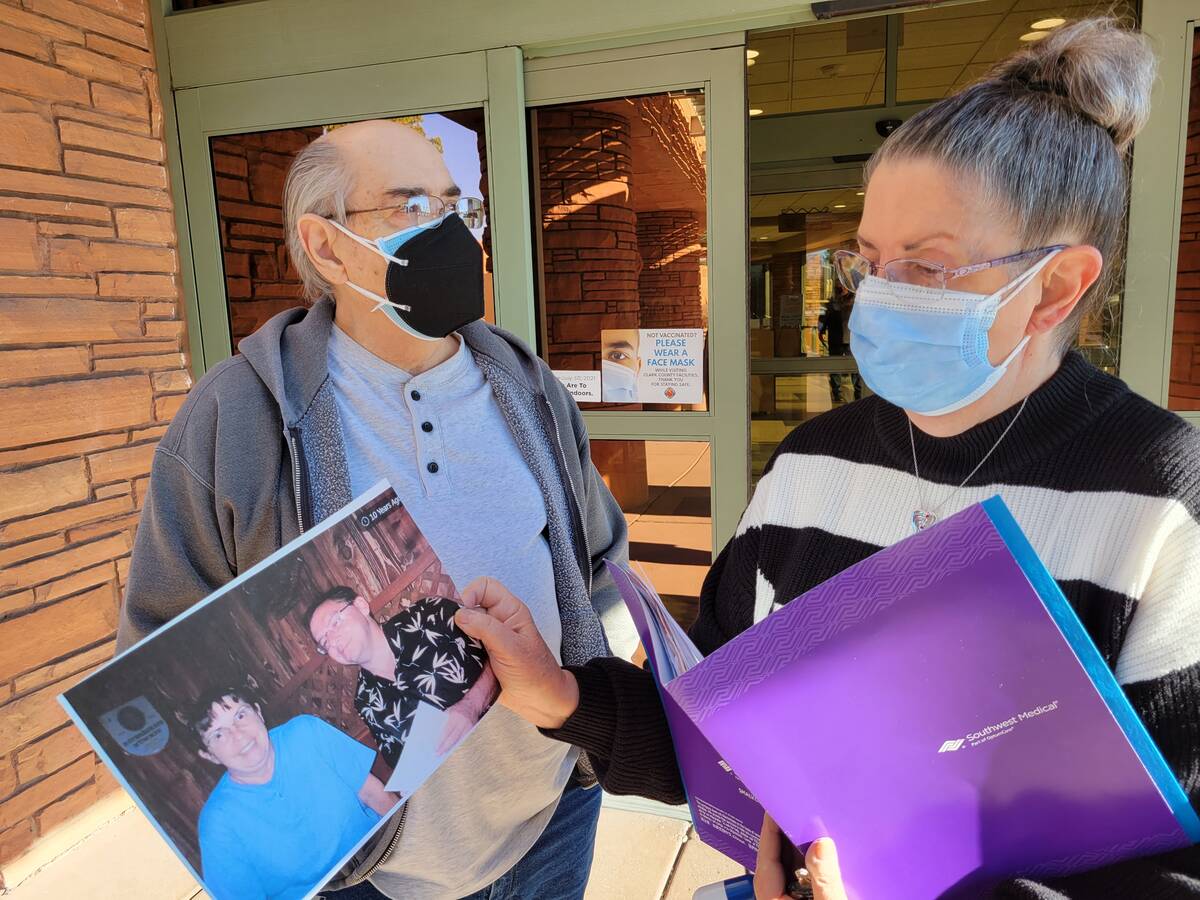 Allan Williams and Sharon Williams on Monday, Jan. 24, 2022, discuss the death of her son, William Thomas Holt Jr., who was shot by Las Vegas police on May 4 after he shot at officers and bystanders at an east valley apartment complex. (Ricardo Torres-Cortez/Las Vegas Review-Journal)

A Metropolitan Police Department officer gunned down 50-year-old William Thomas Holt Jr. on May 4 after he allegedly shot at officers who were responding to reports of gunfire originating from his second-floor balcony in an east valley apartment complex.

The review — among the formal examinations of police shootings created through Clark County ordinance in 2013 — was held at commission chambers after prosecutors issued a preliminary ruling that they would not pursue charges against the officer who shot Holt.

In such an analysis, a detective compiles a report that is presented to the public and a hearing officer in an open meeting.

Williams and her husband sat attentively inside the chambers as Metro Sgt. Trever Alsup outlined the shooting.

“If this was invented to help the families, I don’t think so,” Williams said in an interview after the 45-minute hearing.

Alsup said Holt’s toxicology report showed that his blood alcohol content was .236 — nearly three times the legal amount allowed to drive — which could have impaired his judgment when he began to fire his weapon.

Holt also had an anti-depressant and a prescription sleeping aid in his system, Alsup said.

“What indication, if any, was there that he knew police were present?” attorney Michael Troiano, a designated ombudsman, asked on behalf of Holt’s family.

“I can’t answer that,” Alsup replied, adding that officers only had a chance to shout at Holt to drop his gun.

Fact-finding reviews do not allow cross examination, and there is no subpoena power, said hearing officer Mandy McKellar, who was appointed by the Clark County manager.

The ordinance calls on the Clark County District Attorney’s Office to make a final determination on criminal charges within two weeks of the review.

The day Holt was killed, police responded to reports of gunshots at 3040 E. Charleston Blvd. About 15 minutes later, officers encountered two fleeing men who said that a man was shooting from his second-floor apartment.

Body-camera footage captured the pop of a gunshot and officers taking cover.

Holt went back into his apartment, before he stepped back outside with a rifle “shouldered and pointed in the direction of the officers,” Alsup said.

Officer Erik Lindberg, who was standing in another location, looked through the scope of a rifle and fired two rounds, striking Holt in his stomach from 49 yards away, Alsup said.

No one else was injured.

The officers “felt that their lives were in danger, and they had to stop the threat,” Alsup said.

Williams said that officials did not approach her family to discuss her son’s death.

“I think that a fact-finding review should include everyone,” she said. “I would bet nobody on that panel has ever read my notes, letters, since last May.”

She said her son had lived at the complex for 11 years and was constantly harassed. At one point someone urinated on his car, which was stolen a few months before the shooting.

Holt was a good person, Williams said, adding that someone had also just damaged his apartment’s front door.

In the days that Williams and her husband were clearing the unit after his death, someone broke in to steal his belongings, she said.

The detective investigating the burglary stayed in constant contact for weeks, she said.

“What a contrast,” Williams said about her communication with that detective compared with the contact she had with “the people who shot him.”

While investigating deaths of people in the hands of officers, Metro stays in contact with their relatives as much as needed for the probe, which also was the case with Holt’s death, spokesman Larry Hadfield said.

Williams said she is convinced someone “provoked” her son the night of his death, adding that “he probably knew he crossed the line when he got his guns out.”

Asked to describe her son, Williams pulled out a copy of his obituary that described him as a long-time cab driver who aspired to become a published writer.