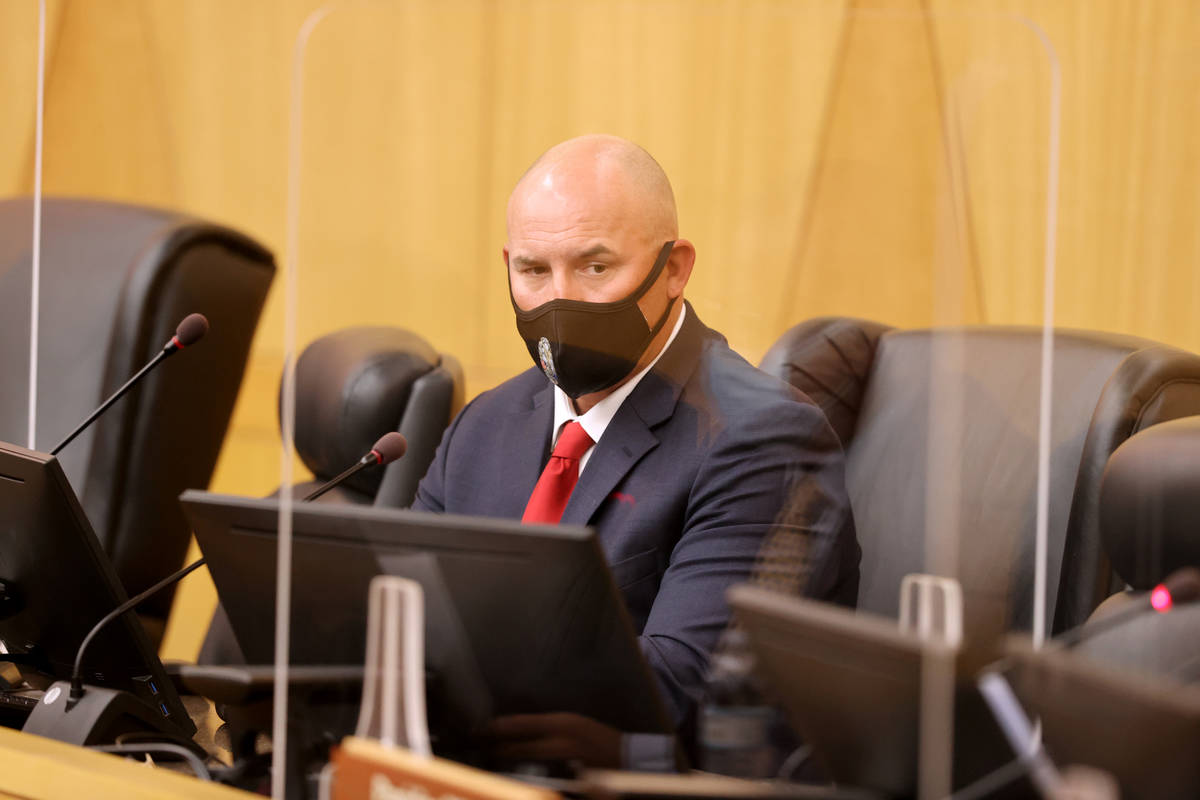 Detective Michael Condratovich watches video while testifying during a fact-finding review at the Clark County Clark County Government Center Monday, March 8, 2021, in the case of Claudia Rodriguez, who was shot and killed by Henderson police in October after she stabbed her 6-year-old son 25 times. (K.M. Cannon/Las Vegas Review-Journal) @KMCannonPhoto 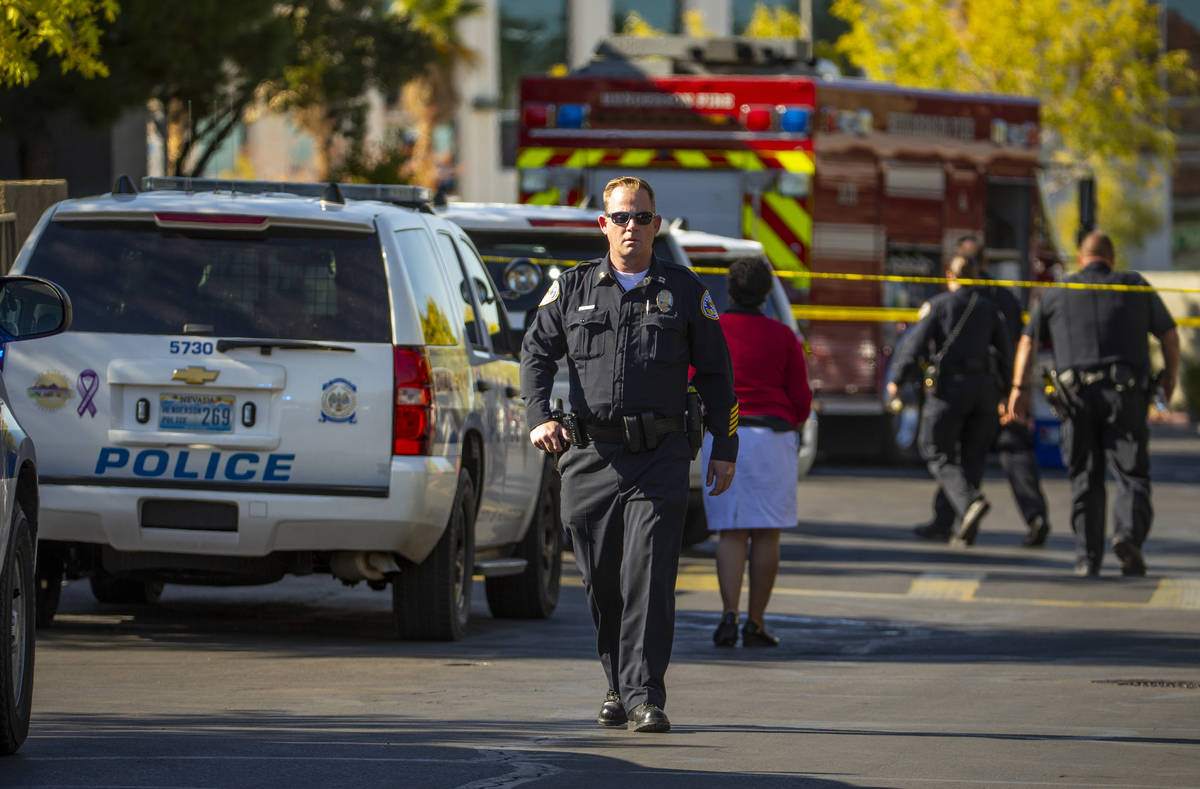 Officers work the scene of a shooting at The Equestrian on Eastern Apartments on Monday, Oct. 21, 2019, in Henderson. (L.E. Baskow / Las Vegas Review-Journal) @Left_Eye_Images 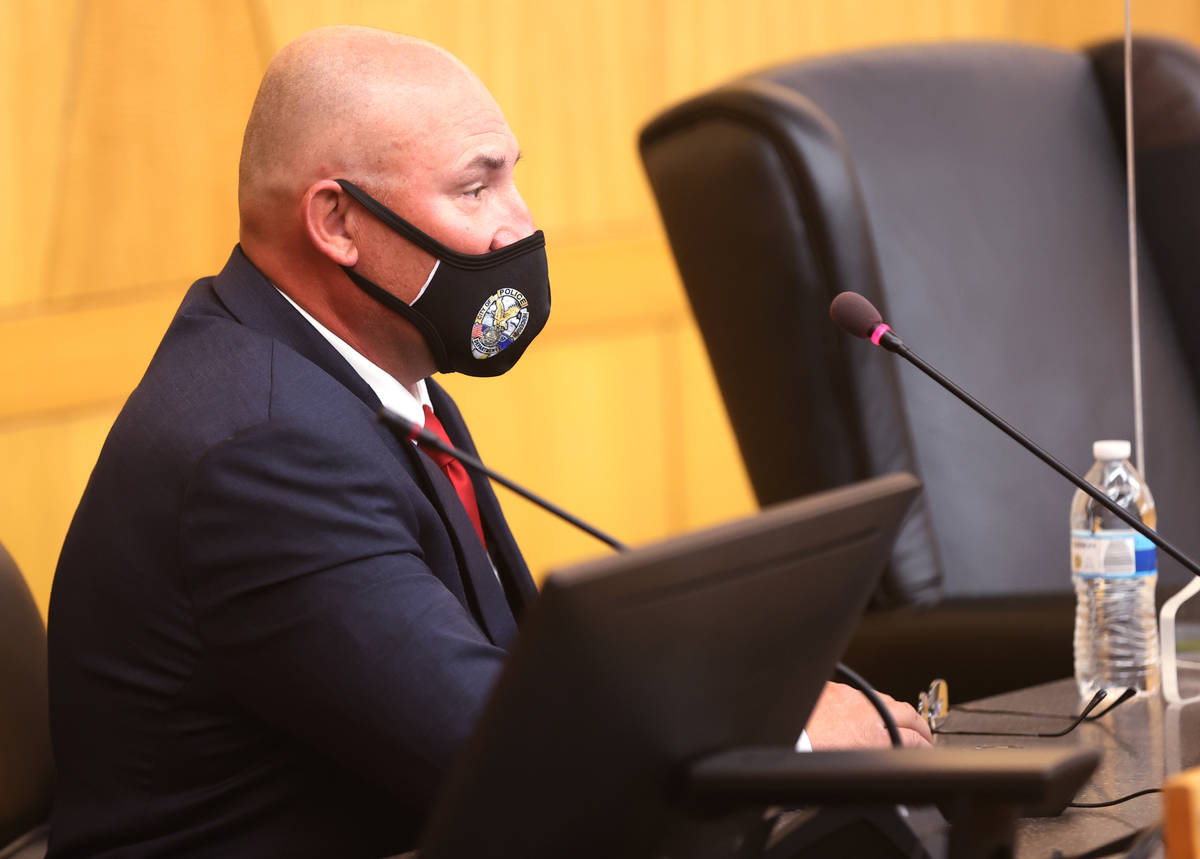 Detective Michael Condratovich testifies during a fact-finding review at the Clark County Clark County Government Center Monday, March 8, 2021, in the case of Claudia Rodriguez, who was shot and killed by Henderson police in October after she stabbed her 6-year-old son 25 times. (K.M. Cannon/Las Vegas Review-Journal) @KMCannonPhoto 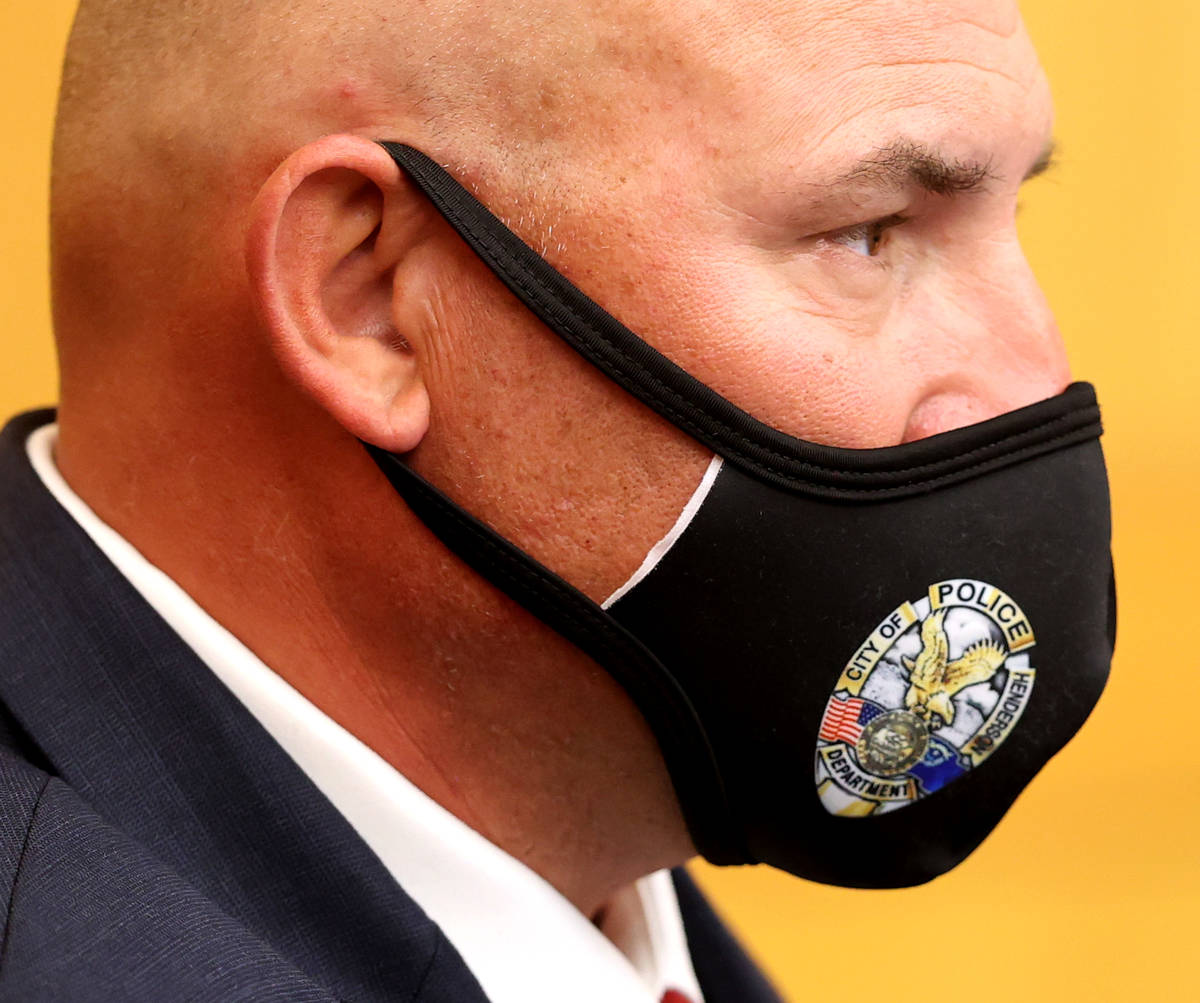 Detective Michael Condratovich testifies during a fact-finding review at the Clark County Clark County Government Center Monday, March 8, 2021, in the case of Claudia Rodriguez, who was shot and killed by Henderson police in October after she stabbed her 6-year-old son 25 times. (K.M. Cannon/Las Vegas Review-Journal) @KMCannonPhoto

Clark County prosecutors will not pursue criminal charges against two Henderson police officers involved in the fatal October 2019 shooting of a woman who had stabbed her young son dozens of times.

The officers — Patrick McCarrick and Edward Little — are credited with helping save 6-year-old Winston Brandon, who suffered 25 stab wounds on his upper body, including a deep wound on the left side of his neck that nicked his carotid artery.

In light of the decision by the Clark County district attorney’s office, a public fact-finding review of the case was held Monday, during which previously unreleased details and videos related to the shooting were made public.

Henderson police Detective Michael Condratovich, who investigated the officers’ use of force, said Monday in his testimony that the boy’s mother, Claudia Nadia Rodriguez, was suicidal and probably experiencing a “mental breakdown” at the time.

During the investigation, Condratovich said, police discovered a text message from Rodriguez’s mother, sent to her the evening before the stabbing and shooting.

In part, the text read: “why ARE YOU saying false things that don’t make sense get yourself together think positive don’t let anything or any negative thoughts create any awful thinking thoughts is driving you nuts you’re going to end up crazy in a mental hospital think before you hurt yourself or your mind is playing tricks on you don’t listen to the demons in your head”

Rodriguez did not have any drugs in her system at the time of her death, Condratovich said.

On the afternoon of Oct. 21, 2019, according to Henderson police, McCarrick and Little were dispatched to Unit 2222 at the Equestrian on Eastern Apartments after an alarming 911 call, made from inside the second-floor, two-bedroom apartment.

During the brief phone call, Winston could be heard yelling, “Mommy is trying to kill me!”

When the officers arrived at the apartment, McCarrick walked up a set of stairs and knocked on Unit 2222 while Little waited near the bottom of the steps. Seconds later, according to body camera footage released Monday, Winston answered the door.

He was covered in blood.

As Winston stumbled out of the apartment, his mother approached McCarrick as she stabbed herself in the chest with a pair of scissors.

During a brief struggle with McCarrick, Rodriguez managed to grab the officer’s Glock 17 handgun.

“She’s got my gun!” McCarrick could be heard yelling in the videos, sending Little up the stairs and into the doorway of the apartment.

As McCarrick wrestled with Rodriguez on the living room floor, the woman fired one round from the officer’s weapon, striking the couch. From the doorway, Little returned fire, shooting his weapon twice.

The first round missed, but the second round struck Rodriguez in the head, according to Condratovich.

In the videos, McCarrick can be seen crawling out of the apartment, yelling, “I’m OK, I’m OK.”

Just outside the unit, Winston was lying on the staircase’s landing, crying.

While Little cleared the rest of the apartment, McCarrick stayed with the boy, who was losing consciousness.

When paramedics arrived, McCarrick carried the boy down the stairs and to the ambulance.

Condratovich said Monday in his testimony that the boy survived. He will turn 9 in November.

The boy’s mother had been arrested four times on suspicion of domestic battery between 2015 and March 2019, according to Henderson Municipal Court records. She pleaded guilty in January 2017 to misdemeanor domestic battery.

Details of her prior arrests weren’t immediately known, but records show that a month after Rodriguez’s conviction, the boy’s father, Willie Brandon Jr., sought help from the court to gain primary physical custody of Winston.

The documents filed in the custody battle accused Rodriguez of physically and mentally abusing her two older children from a previous relationship.

Despite the woman’s criminal history, according to the court records, a judge allowed joint custody of Winston.