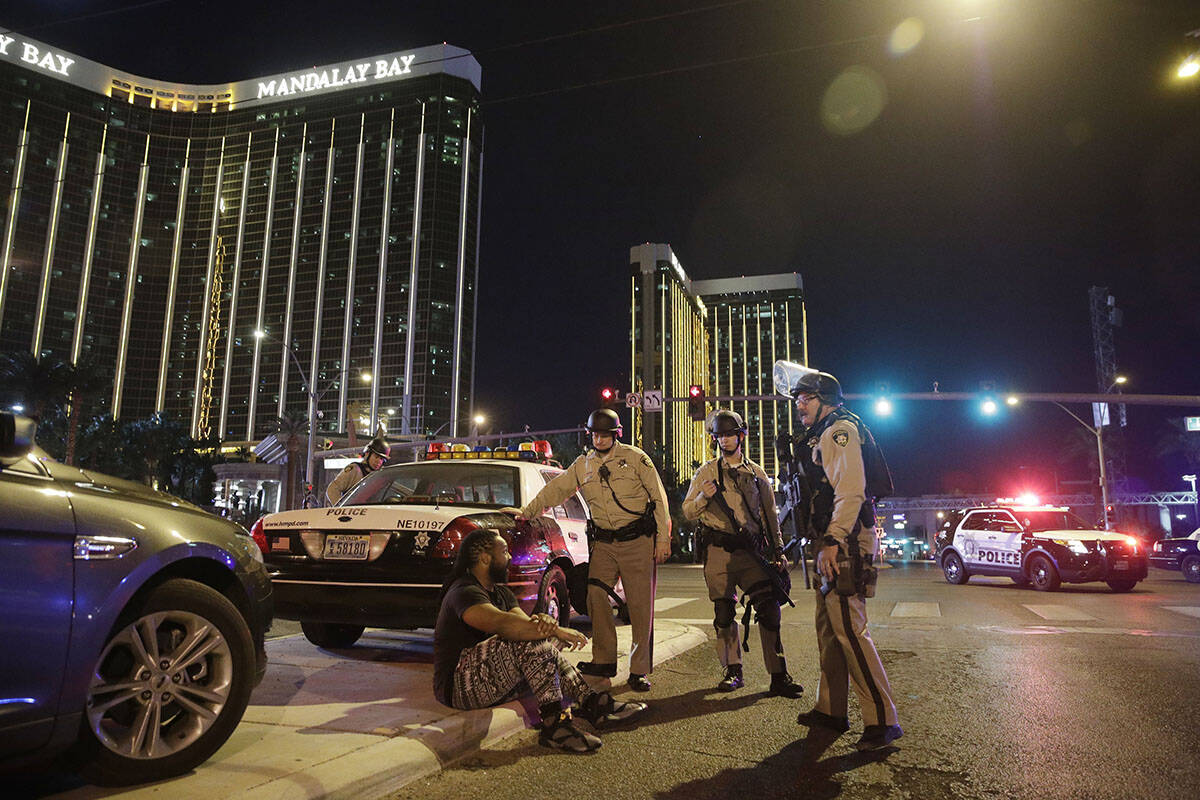 Police officers stand at the scene of a mass shooting near Mandalay Bay on the Las Vegas Strip on Oct. 1, 2017. (AP Photo/John Locher)

The Metropolitan Police Department will pay $250,000 to the Las Vegas Review-Journal to settle the news organization’s lawsuit over access to records from the mass shooting that occurred on Oct. 1, 2017.

“Public records requests should never result in the kind of prolonged litigation the Review-Journal had to initiate against Metro,” Review-Journal Executive Editor Glenn Cook said. “The public ends up paying the price twice, first through needless delays in the release of important information, then getting stuck with the legal costs of winning that release.”

The Metropolitan Police Committee on Fiscal Affairs approved the settlement at its meeting on Monday.

“The Court found largely in favor of the media,” the committee wrote in a budget memo noting the settlement.

The Review-Journal filed the lawsuit in January 2018 after Metro refused to release body camera footage and 911 calls related to the shooting. The case resulted in a Nevada Supreme Court ruling in favor of the newspaper and ultimately 34 weekly releases of officer reports, video and audio from more than 500 Las Vegas police officers who descended on the scene.

District Judge Richard Scotti previously ruled that the department could not charge journalists hundreds of thousands of dollars for the production of those records.

“The Review-Journal led the effort to get information to the public about 1 October’s tragic events,” RJ attorney Maggie McLetchie said. “After the Las Vegas Metropolitan Police Department resisted those efforts, the Review-Journal took the department to court. We prevailed, and the Review-Journal was entitled to its legal fees and costs. Rather than spend more time litigating over how much it should be compensated, the Review-Journal agreed to settle for $250,000. The high number reflects how much work went into getting access to help the public assess what happened on 1 October and how Metro responded. We’re pleased we could reach settlement rather than expend more of the newspaper’s and taxpayers’ resources in litigation over fees.”

In 2018, District Judge Jim Crockett also sided with the Review-Journal and The Associated Press in their effort to obtain the autopsy reports of those killed in the shooting. Crockett ordered the Clark County coroner’s office to pay the $32,000 in legal fees accrued in that fight.

The records revealed that the first arriving officer at the gunman’s Mandalay Bay suite did not turn on his body camera, that all of the victims died from at least one gunshot wound and that within two hours of the shooting, officers shared photos of the gunman’s body over cellphones.

“The Review-Journal is incredibly proud of the great reporting we produced surrounding this vital story about such a horrible tragedy,” RJ general counsel Benjamin Lipman said. “We are glad the long struggle with Metro over access to the public records necessary to tell that story is now over.”

The shooting at the Route 91 Harvest festival on the Strip initially killed 58 concertgoers. Two others later died from their injuries, bringing the death toll to 60.