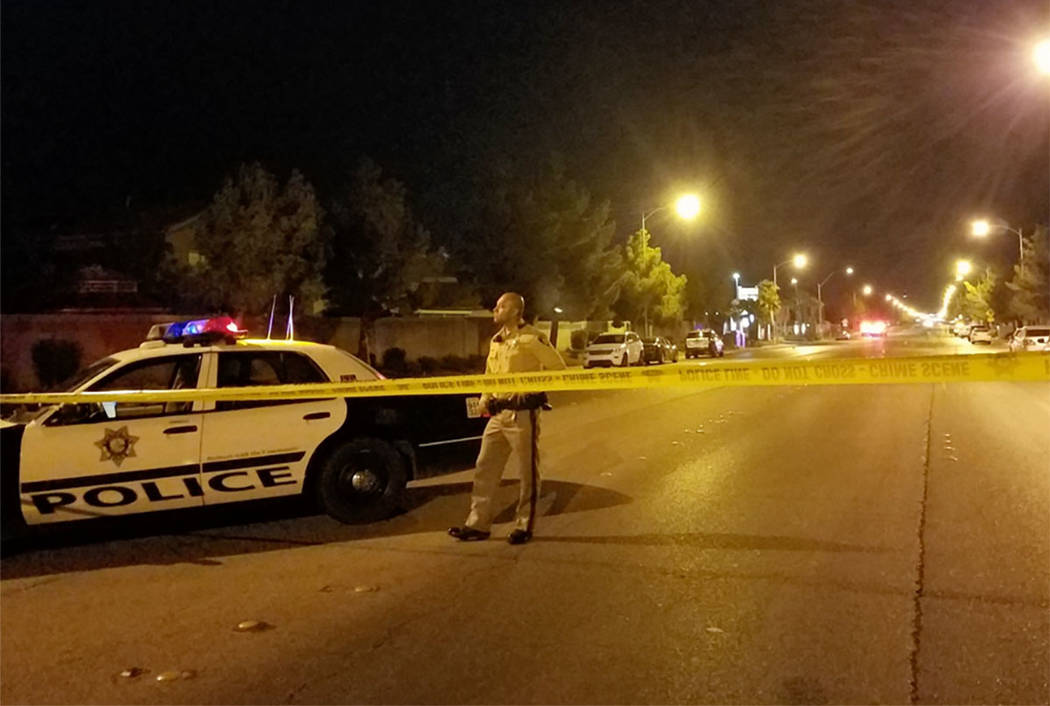 The scene of an officer-involved shooting near 780 E. Pyle Ave. in Las Vegas on Saturday. (Mike Shoro/Las Vegas Review-Journal)

Cheyenne Teague was just pulling up to work Saturday evening at Lefty’s Pizza when she heard the woman wail. It was a loud, moaning cry, she said. Her boyfriend, Jesse Arias, peeked over at the neighboring convenience store, Fuel Zone Mart. He saw someone on the floor.

One person stared at the couple, she said. But everybody else in the south valley parking lot, which is shared by several other businesses, seemed to just carry on.

They filled up their cars’ tanks with gas. One man casually stowed water in his car right in front of the woman, who police would later say was being choked by a man as their 10-year-old daughter stood nearby.

Teague thought maybe it wasn’t so serious. Maybe the couple was breaking up, or fighting, or something.

“Nobody really said anything until the gun was pulled out,” the 22-year-old said Sunday.

When that happened at about 5:30 p.m. the police were called. Teague could hear the sirens. Outside the convenience store at 780 E. Pyle Ave., near Maryland Parkway and Cactus Avenue, she heard the gunshots.

A Las Vegas police officer had fired four times, killing the man who was holding the woman at gunpoint, officials said Saturday.

The woman was also shot, in the abdomen, but is expected to survive. It’s unclear which gun shot the woman, as the man and the shooting officer had the same 9 mm handguns, Metropolitan Police Department Capt. Kelly McMahill said Saturday.

In the parking lot surrounded by residential homes, the officer-involved shooting shook neighboring businesses. A man working the register at the convenience store Sunday said such major incidents are rare. “It’s usually pretty quiet. Ninety percent of the people that come in live around here,” he said.

At the American Mini Mart across the parking lot, 62-year-old Sam Goel said he heard three shots Saturday night. Four or five customers at his register threw their beers and cigarettes on the counter and ran out the open door.

The store, like the other businesses in the lot that were open at the time, had to close for the night. Streets were blocked from Pollock Street to Silverado Ranch Boulevard, halfway to Bermuda Road, Teague said.

Teague heard two shots. She ran outside and saw both the man and woman on the ground. An officer was placing handcuffs on the man, but the man didn’t move, she said. The man and the woman were put in separate ambulances, headed to University Medical Center. Hers left with sirens. His was quiet, Teague said.

“I think he was already gone,” she said. “I’ve lived there since I was 14, and nothing like that’s ever happened. So scary.”

Teague said police were quick to respond Saturday and that she thinks the officer reacted the best way he could.

“It shook us up,” she said. “At least they took care of it, you know. They were there right away.”