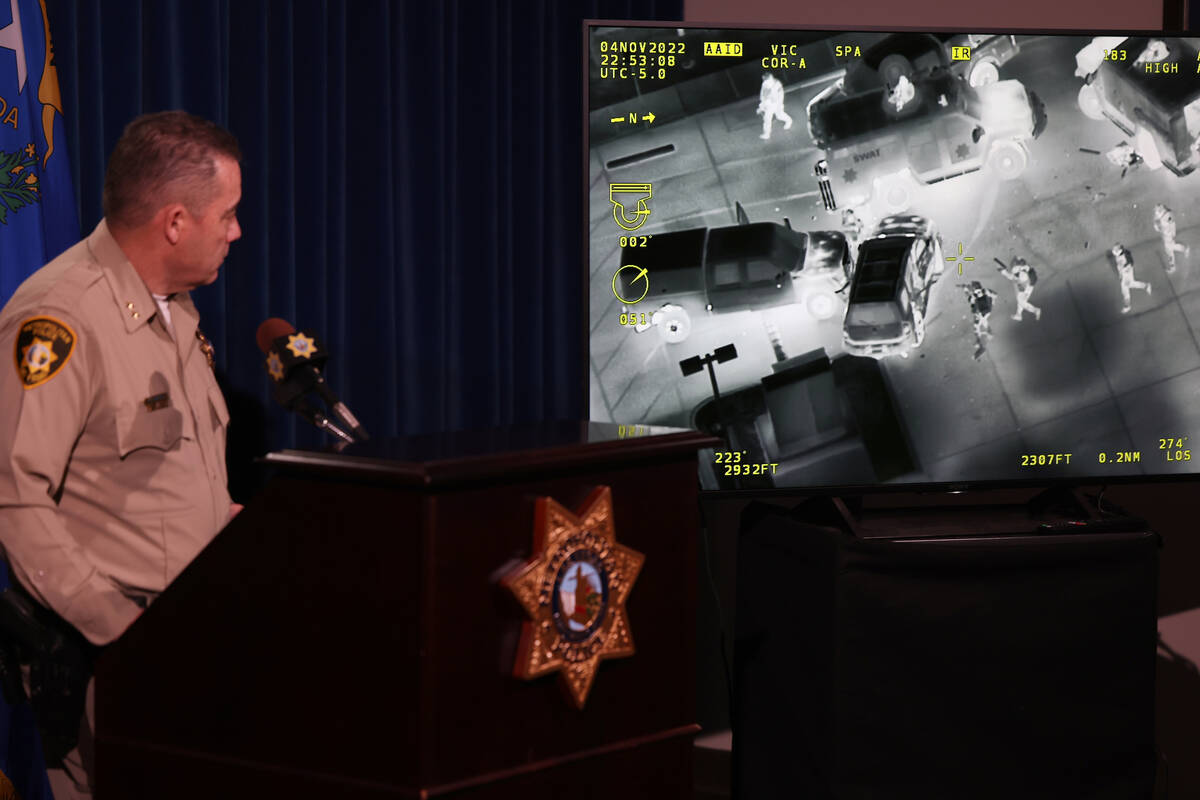 Assistant Sheriff Andrew Walsh shows a video of police closing in on Jose Cabrera Hernandez during a news conference at Metropolitan Police Department headquarters in Las Vegas Tuesday, Nov. 8, 2022. Cabrera Hernandez was a homicide suspect who was shot and killed by Las Vegas police on West Spring Mountain Road after he took a hostage. (K.M. Cannon/Las Vegas Review-Journal) @KMCannonPhoto 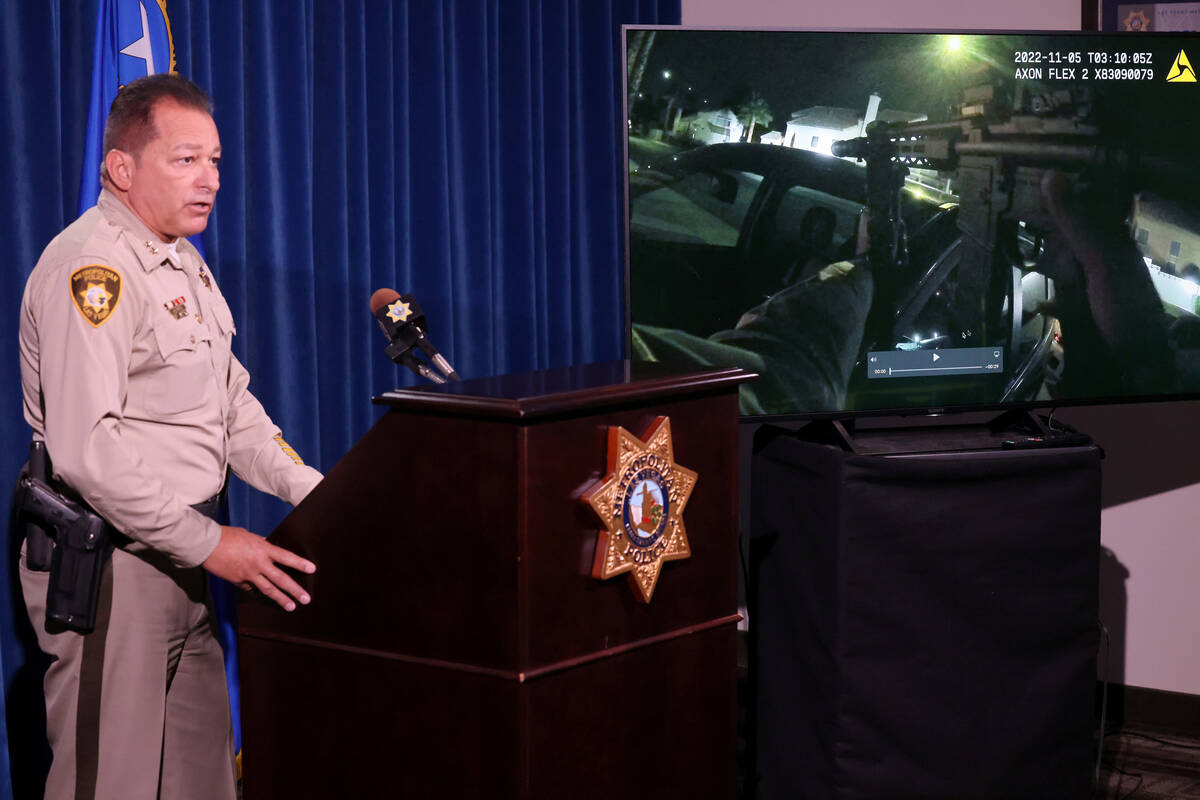 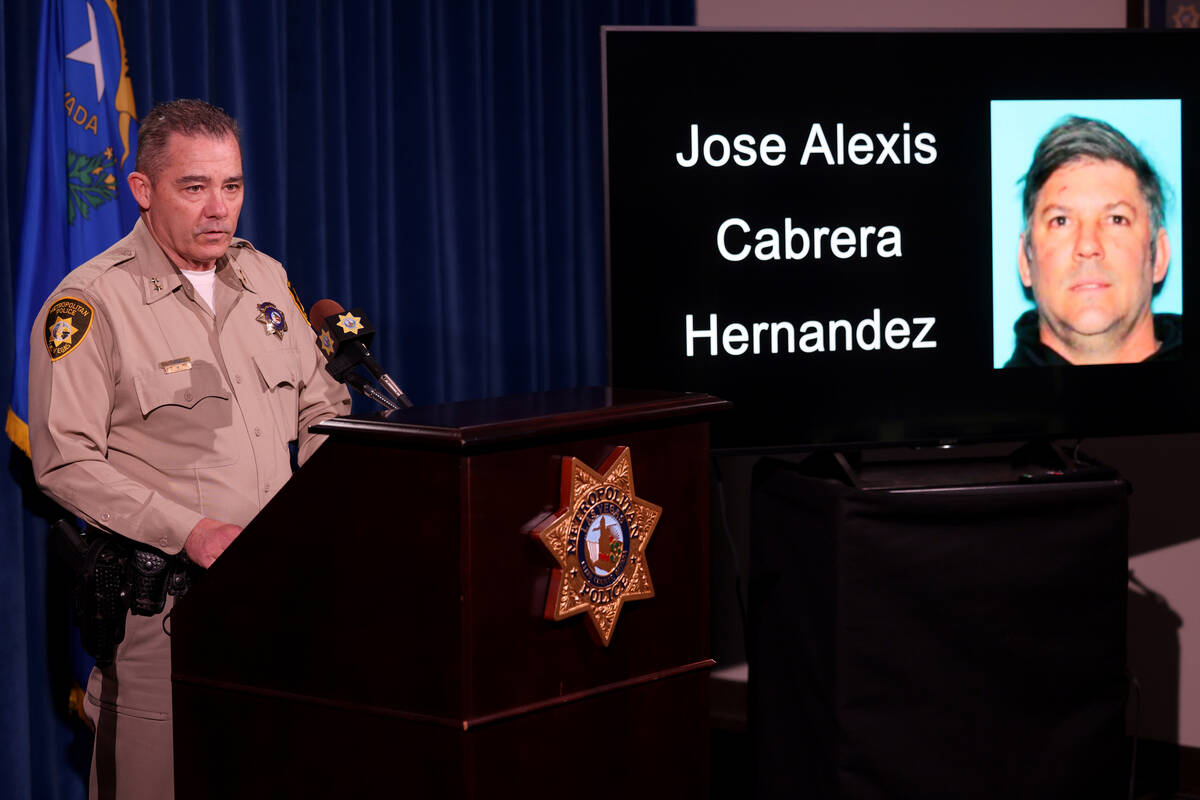 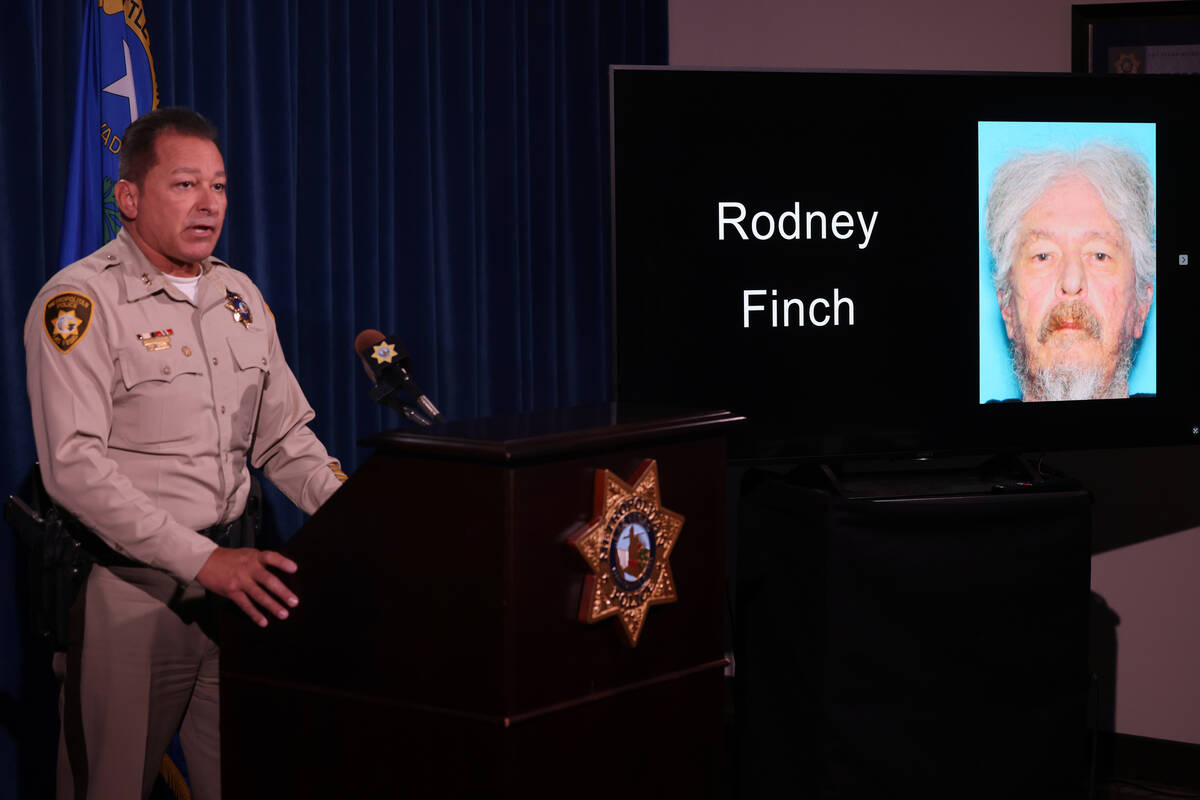 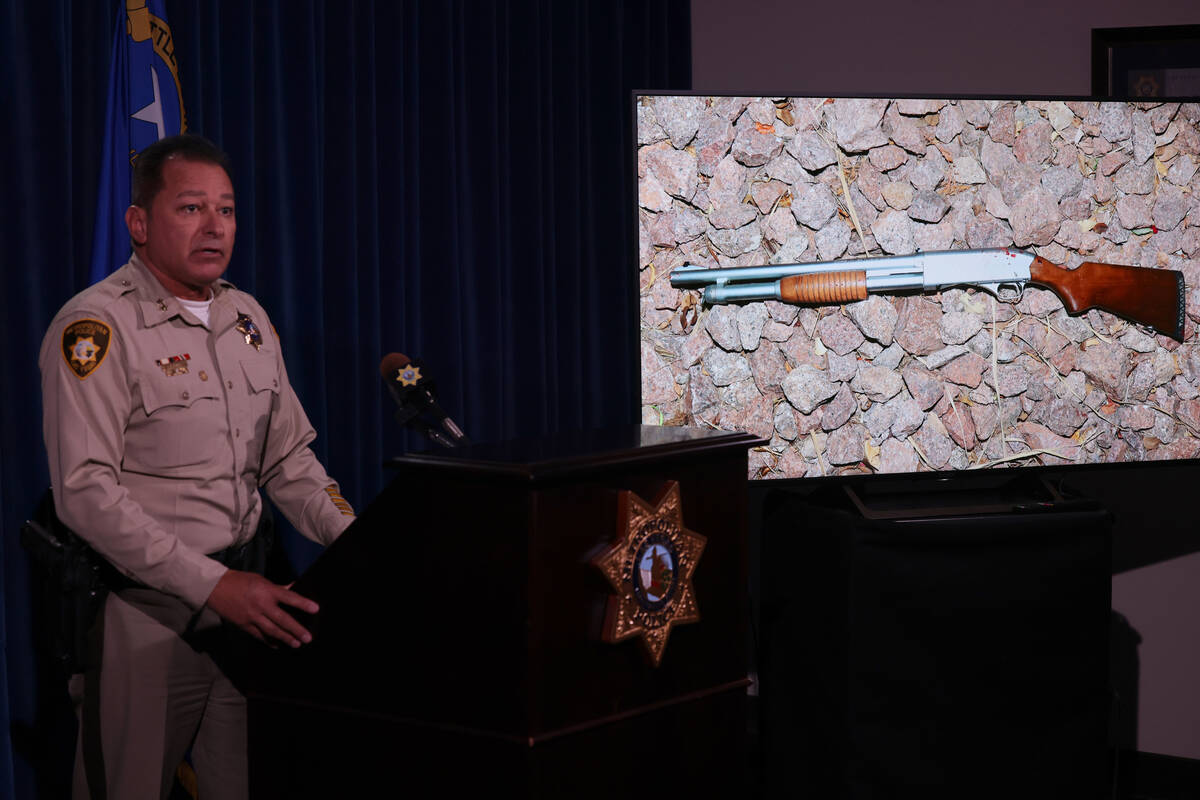 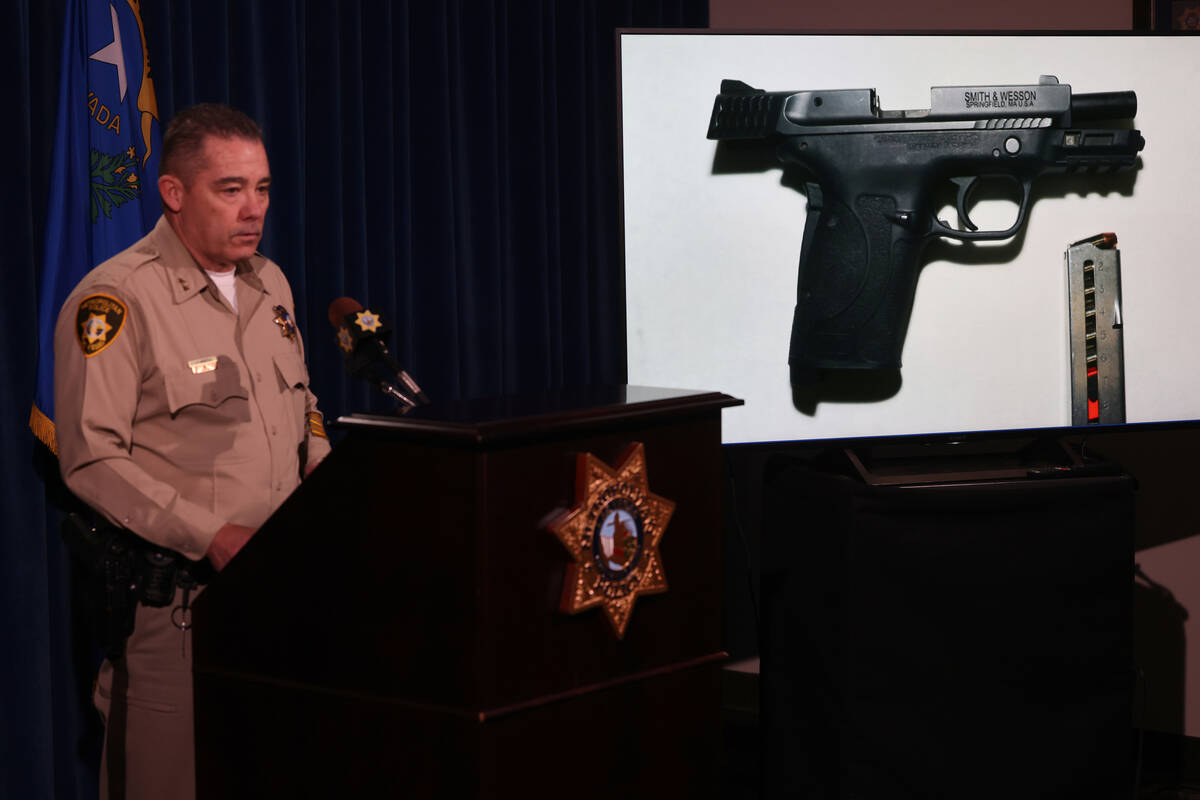 Assistant Sheriff Andrew Walsh shows a photo of a gun belonging to Jose Cabrera Hernandez during a news conference at Metropolitan Police Department headquarters in Las Vegas Tuesday, Nov. 8, 2022. Cabrera Hernandez was a homicide suspect who was shot and killed by Las Vegas police on West Spring Mountain Road after he took a hostage. (K.M. Cannon/Las Vegas Review-Journal) @KMCannonPhoto 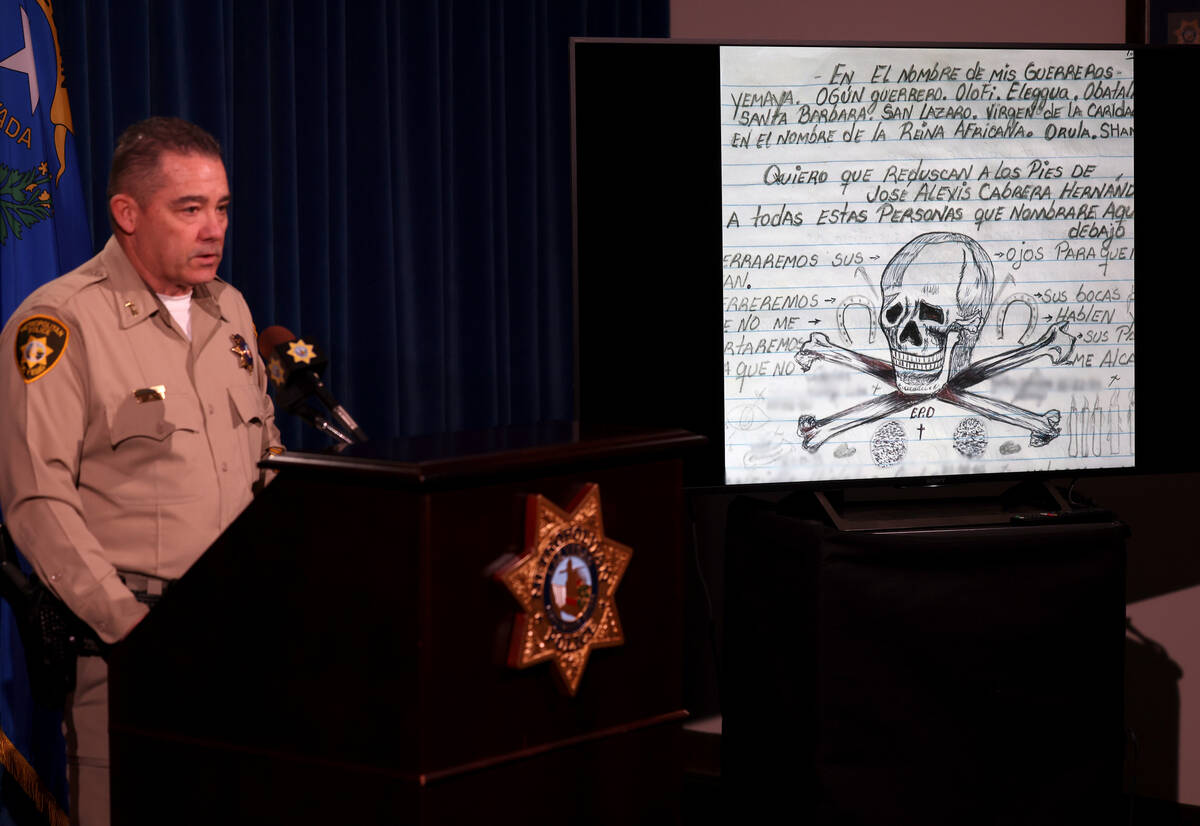 Assistant Sheriff Andrew Walsh shows a photo of a manifesto belonging to Jose Cabrera Hernandez during a news conference at Metropolitan Police Department headquarters in Las Vegas Tuesday, Nov. 8, 2022. Cabrera Hernandez was a homicide suspect who was shot and killed by Las Vegas police on West Spring Mountain Road after he took a hostage. (K.M. Cannon/Las Vegas Review-Journal) @KMCannonPhoto 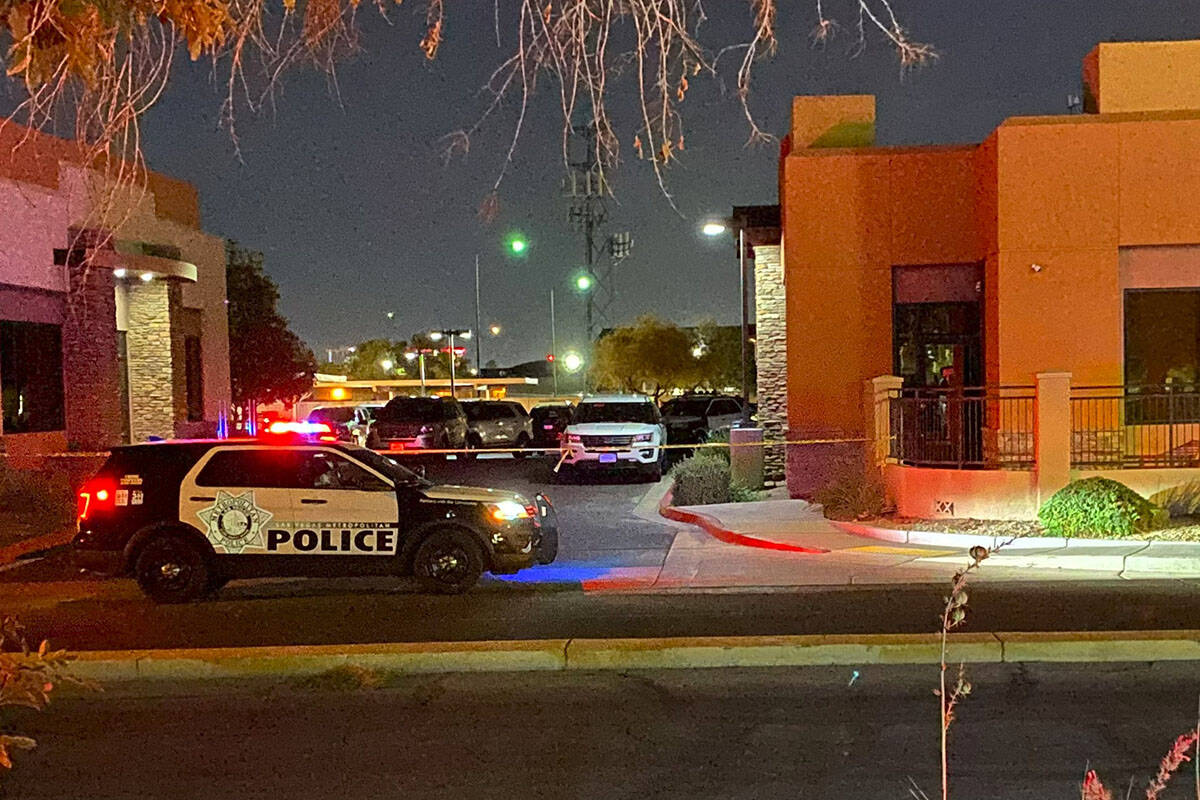 Las Vegas police on Tuesday released footage that illustrated encounters with two men before they were fatally shot by officers on the same night last week.

Rodney Finch, 62, stood in his front yard in the 8400 block of West Shady Shores Circle, near North Rampart Boulevard, aiming a 12-guage shotgun at vehicles passing by and later at officers who arrived in response to a 911 call on Friday night, Assistant Sheriff Lazaro Chavez told reporters at a press briefing.

Officers parked outside the house for about 20 minutes around 7:30 p.m., while Finch walked in and out of the house, at times unarmed, but sometimes holding the shotgun.

Finch did not fire his shotgun before he was struck, but Chavez said Finch had six rounds loaded into the weapon with seven more in his pocket.

“We talked to neighbors, we talked to the victims that were there that day that had the gun pointed at them and they said that he was speaking incoherently at times, but there’s no real reason we can find at this point,” Chavez said regarding any motive Finch may have had.

Cabrera Hernandez called his ex-wife four times while driving, offering to trade her for her brother so they could go to Mexico and repair their relationship, Walsh said.

Cabrera Hernandez parked on the 6200 block of Spring Mountain Road at 8:46 p.m. and attempted to run off with the man he had taken hostage, but officers surrounded him.

“The hostage later told us that night that the SWAT officers, that they saved his life and that he was in fear that Cabrera Hernandez was going to kill him,” Walsh said, gesturing at evidence displayed on a screen next to him. “As part of the initial investigation, we recovered a manifesto from the vehicle, which was written by Cabrera Hernandez, with the skull and the crossbones, that was basically written in Spanish. When we interpreted it, he was threatening to kill other officials in town that had things to do with his previous criminal history.”

Police also found a Smith & Wesson 380 inside the Armada, according to Walsh.

“You know that the person that you’re looking for is capable of taking a human life, which obviously ups the ante for us from the start, then he has a hostage that we know he zip-tied from the scene,” Walsh said. “It’s a harrowing decision to make an attempt to try to rescue the hostage and get him out of the car peacefully.”

Cabrera Hernandez pleaded guilty to attempted stalking in June, and in May the district attorney’s office declined to prosecute him on a gross misdemeanor charge of violating a temporary protection order, according to court records.

In April 2021, Cabrera Hernandez was arrested after he admitted to police he was altering vehicles in a backyard chop shop to make fuel trucks, according to an arrest report.

He was sentenced to 19 months in the Nevada Department of Corrections on Oct. 26 in connection with the case, but a judge suspended his sentence, instead ordering him to serve two years of probation.