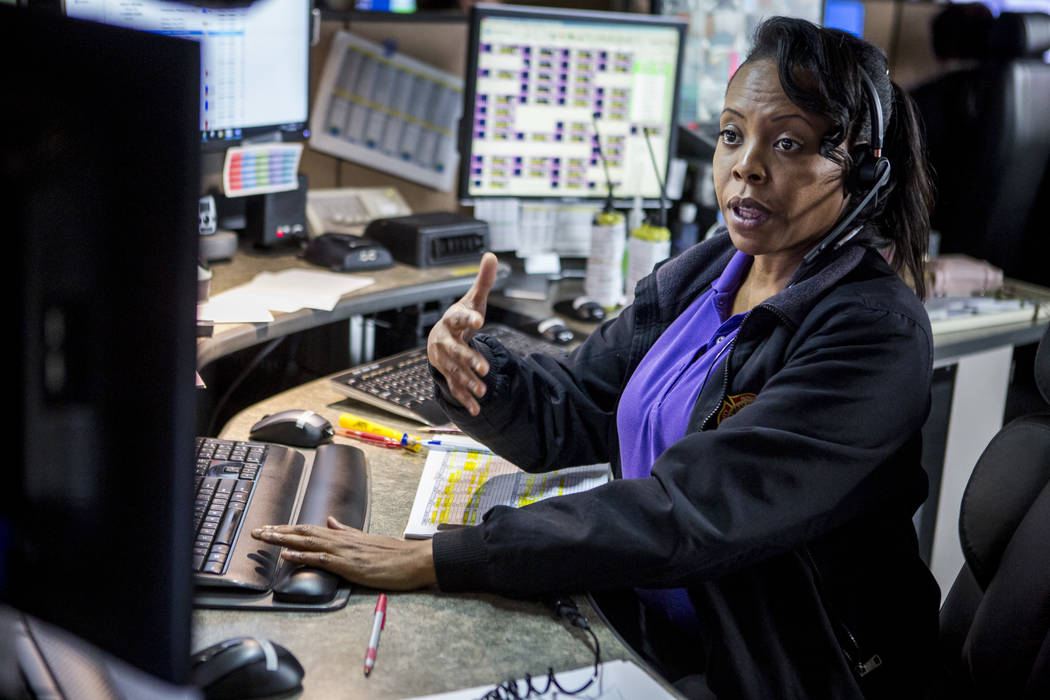 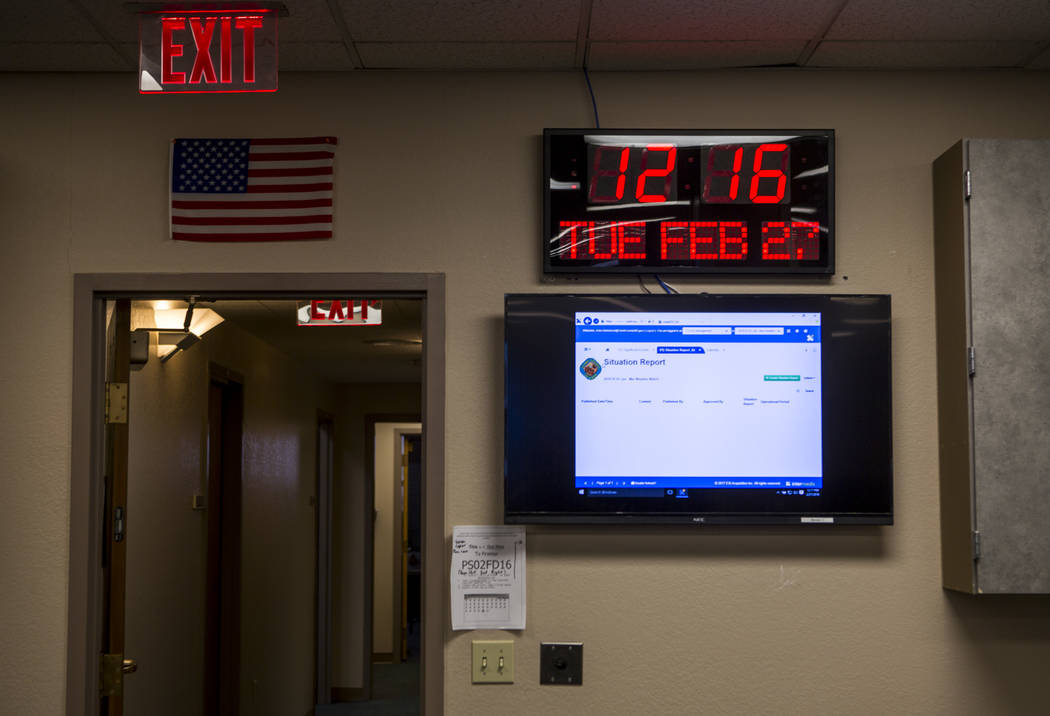 The multi-agency coordination center, where representatives from many agencies come together in emergency scenarios, at Fire Station 18 on Flamingo Road in Las Vegas on Tuesday, Feb. 27, 2018. Patrick Connolly Las Vegas Review-Journal @PConnPie 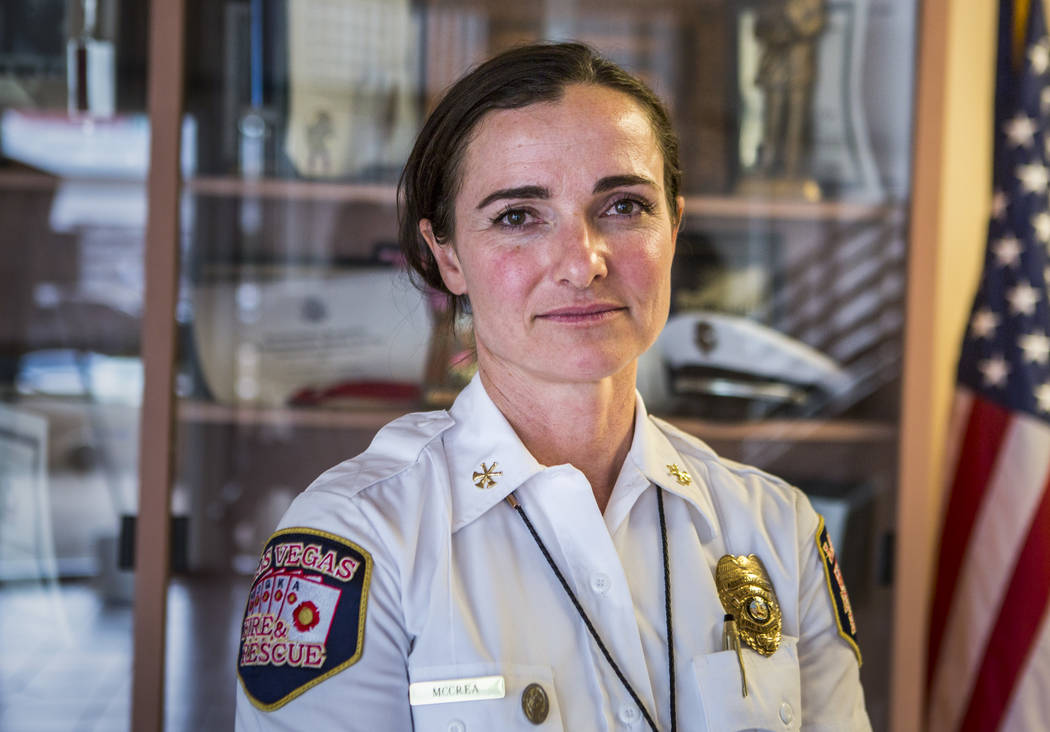 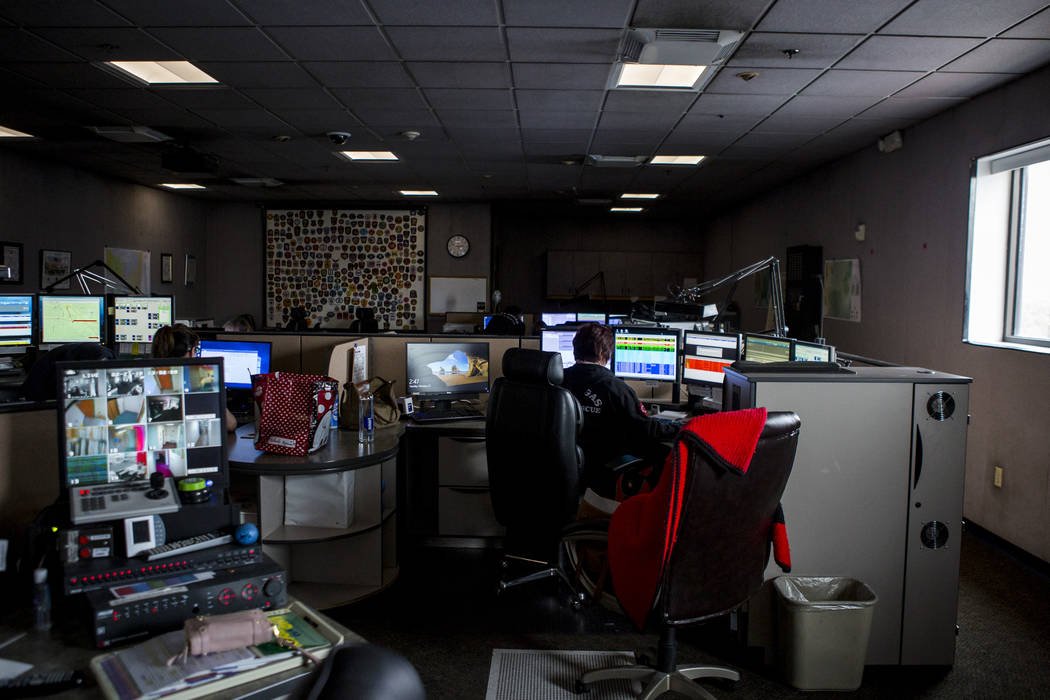 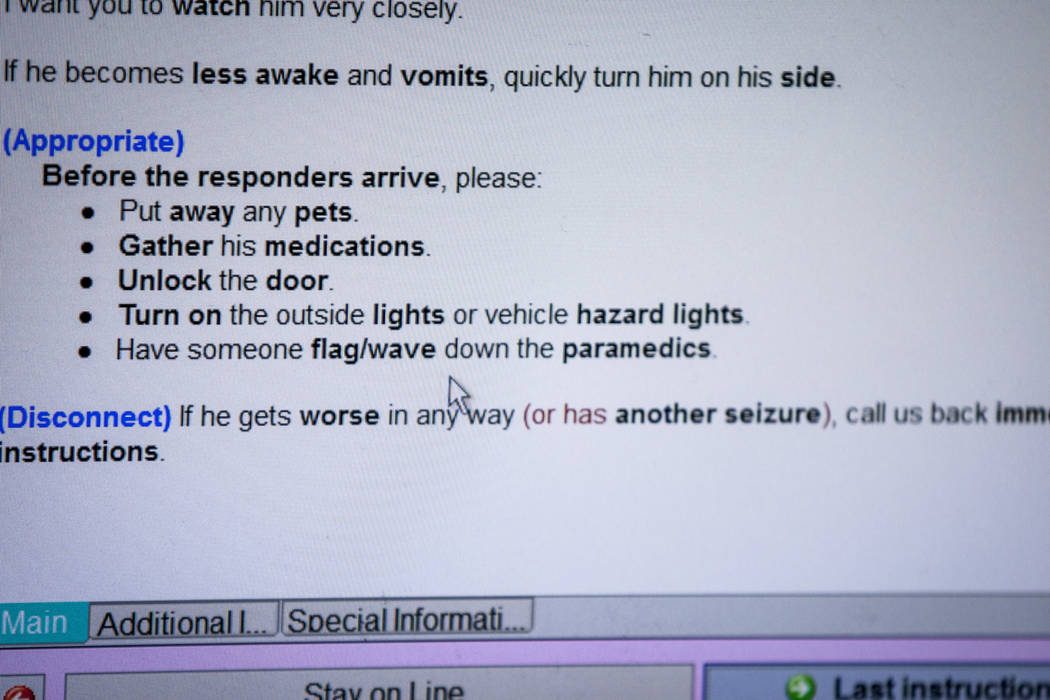 A prompt explains to dispatchers how to talk callers through a medical emergency at Fire Station 1 on North Casino Boulevard in Las Vegas on Tuesday, Feb. 27, 2018. Patrick Connolly Las Vegas Review-Journal @PConnPie

University Medical Center – the only Clark County hospital with a Level 1 trauma center – failed to follow county procedure the night of Oct. 1 when it called an “internal disaster” alert during a mass casualty incident.

Use of the alert that night, apparently intended to warn employees that an “all hands on deck” situation was unfolding after the mass shooting on the Strip, instead caused confusion among emergency responders, including contributing to an erroneous dispatch on a Clark County Fire Department radio channel stating that the hospital’s emergency room was “completely out of beds.”

Nearly six months after the shooting, the dispatch remains the most significant known lapse in the execution of the county’s emergency response plan. As reported by the Las Vegas Review-Journal in January, county officials who oversee the valley’s emergency management system have attributed the mix-up to human error and said they do not plan to investigate how it happened.

The confusion stemmed in part from the increasing use in recent years of “internal disaster” – an alert designed to be used in various scenarios where patient care could be compromised – to signal emergency room overcrowding at UMC.

Las Vegas emergency officials told the Review-Journal they were startled when UMC called the alert within an hour after the deadliest mass shooting in modern U.S. history.

When officials at the dispatch center were unable to clarify UMC’s status by phone, they sent Las Vegas fire battalion chief Michael Thom to the county-run hospital at 1800 W. Charleston Blvd. to see what was happening.

When he arrived at the trauma unit, he spoke with two employees who disagreed whether the hospital was accepting all patients or only those with traumatic injuries. Unable to get a clear answer, Thom told them to call him when they sorted it out and left, according to fire department spokesman Tim Szymanski.

One official who served on the county board that developed the “internal disaster” protocol called the use of the alert on Oct. 1 a serious mistake.

“That guy’s probably sitting in someone’s office right now because you can’t do that,” the official, who spoke with the Review-Journal on condition of anonymity, said of the unidentified hospital employee who called the alert. “You just can’t.”

UMC and Clark County emergency management officials have never fully explained why the hospital called the alert that night and they again declined to directly comment for this story. But a statement from a hospital spokeswoman in January indicated the alerts serve as an internal signal that the hospital is “extremely busy and alerts staff that we may need extra supplies and staffing.”

That’s a common condition at the hospital, according to a review of Southern Nevada Health District records that shows UMC last year called internal disaster alerts more than four times a week on average — more frequently than the other 12 valley hospitals covered by the data.

That’s precisely the situation emergency management officials sought to avoid when they drafted a new county policy in the early 2000s to limit the practice of hospitals closing their doors to all but the most grievously injured.

The term was defined by the Southern Nevada Health District in 2004 in an attempt to do away with emergency room diversion, where hospitals would close their emergency rooms whenever they felt overwhelmed, which usually meant when they were overcrowded. That would force ambulance drivers to sometimes hop from one ER to another to find one capable of taking patients, said former county health district emergency medical services manager Rory Chetelat.

“Throughout my entire career, this has been a major problem for EMS,” said Chetelat, who retired in 2014 after 11 years with the health district.

To curb the practice, the health district’s facilities advisory board, made up of hospital representatives and health district staff, hammered out an agreement for a new system, said Henderson Fire Deputy Chief Scott Vivier, who was involved in the discussions.

Under the definition agreed to, the only reason to issue an “internal disaster” alert was “an event or condition that significantly disrupts the organization’s ability to provide patient care.” The language listed a range of conditions — from explosion, to power loss, to inadequate staffing and overcrowding – that would justify its use.

It specifically said, however, that the alert was not to be used during mass casualty incidents. 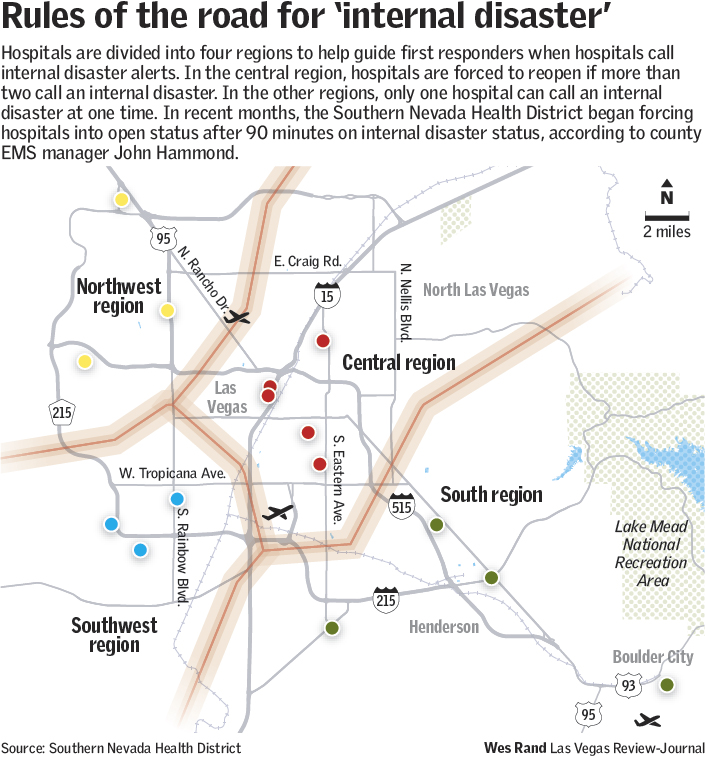 The new system contained a disincentive for hospitals to call internal disasters: the code would require them to close the entire hospital — not just the emergency room — meaning they would be unable to accept more-profitable longer-term patients during the period, according to the former board member.

Over the years, additional clarifications were adopted, Vivier said. Fifteen county hospitals were divided into four geographic regions. Under the plan, only one or two hospitals — depending on the region — were allowed to be on internal disaster at one time or the county would force all facilities to reopen.

The problem is the new system didn’t come with any real oversight of hospitals, said Chetelat, the former county EMS manager.

“In the end, there wasn’t anyone who was going to fine them or close them down or anything else,” he said.

The only other valley hospital to use the alert more last year was Dignity Health-St. Rose Dominican Hospital’s Siena Campus in Henderson, which was on “internal disaster” for a total of 1,102 hours in 2017. The hospital called fewer “internal disaster” alerts than UMC, but they typically lasted longer when it did. (The St. Rose hospital group declined to answer why it used the alert so often, but said it was “constantly looking for – and implementing – new strategies to ensure that patients in our emergency departments are seen as quickly as possible.”)

In contrast, Sunrise Hospital Medical Center, calls the alert only when the hospital’s infrastructure is literally crumbling. It was triggered twice for a total of 6.5 hours in 2017 after network outages, health department data show.

On average, more than 90 percent of hospital internal disaster hours are issued for capacity issues. At UMC, that number is 98.5 percent.

A central problem with the “internal disaster” protocol as it is used in Clark County is that it means different things to different audiences. For staff members at UMC, it means all hands on deck, but ambulance drivers see it as a warning to stay away.

The point is illustrated by Massachusetts General Hospital’s handling of the 2013 Boston Marathon bombings.

Hospital officials called a “Code Disaster,” alerting staff to an anticipated influx of patients that would require additional resources, said Dr. David King, a trauma and acute care surgeon. But it didn’t issue a “Code Black,” which tells ambulances to avoid a hospital while it’s overwhelmed. If it had, the hospital’s response to the bombings would have been disrupted, he said.

“It may just require some deconfliction between what is internal language and what is external language,” he said of Clark County’s dual messaging.

Those involved in conversations at the Southern Nevada Health District say they’re working on it.

“We’ve wrestled with this for over a decade,” said Vivier, the Henderson fire official.

He said officials in Henderson developed a technique designed to put hospitals on the spot if they repeatedly used internal disaster when they approached capacity. He said the fire department began calling and asking if it could help by setting up a mobile medical facility outside the ER.

The hospital, strained but not at its tipping point, would decline, and a fire official would respond, “OK, great. I’m sending you our next ambulance,” Vivier said.

Now, if a hospital says it’s dealing with overcrowding and capacity issues, Vivier trusts the hospital is “not playing any games.”

“We’ve realized when a hospital goes on internal disaster, they generally are doing it for the best interest of the patient,” he said. Every bed is full, the waiting room, full, they’ve called in extra staff, canceled elective surgeries and stopped taking transfers from other hospitals, Vivier said.

UMC CEO Mason VanHouweling made a similar point in a statement provided to the Review-Journal, saying that taking a person to an overrun facility would put that patient’s safety at risk.

“It can lead to increased errors, potential harm and unnecessary deaths,” he said.

He also said the hospital is trying to address overcrowding by adding 18 beds to its emergency room.

The Southern Nevada Health District’s facility advisory board also is revisiting the issue of “internal disaster” alerts. At its last meeting in January, John Hammond, the health district’s EMS and trauma systems manager, told board members he planned to institute a time limit of 90 minutes on the alerts to help hospital staff who send an alert and forget to switch it off.

One board member, Dr. Christian Young, medical director of the county’s EMS and trauma system, asked whether there had been discussion of changing the term “internal disaster.”

“Call it what you will, if it is diversion or bypass, I have no problem calling it that to reserve internal disaster for something that is more appropriate for what that term conveys,” Young said.

Hammond replied that the district’s medical advisory board was again taking up the matter, but cautioned that any change in the terminology would take time.

“Please bear with us,” he said.