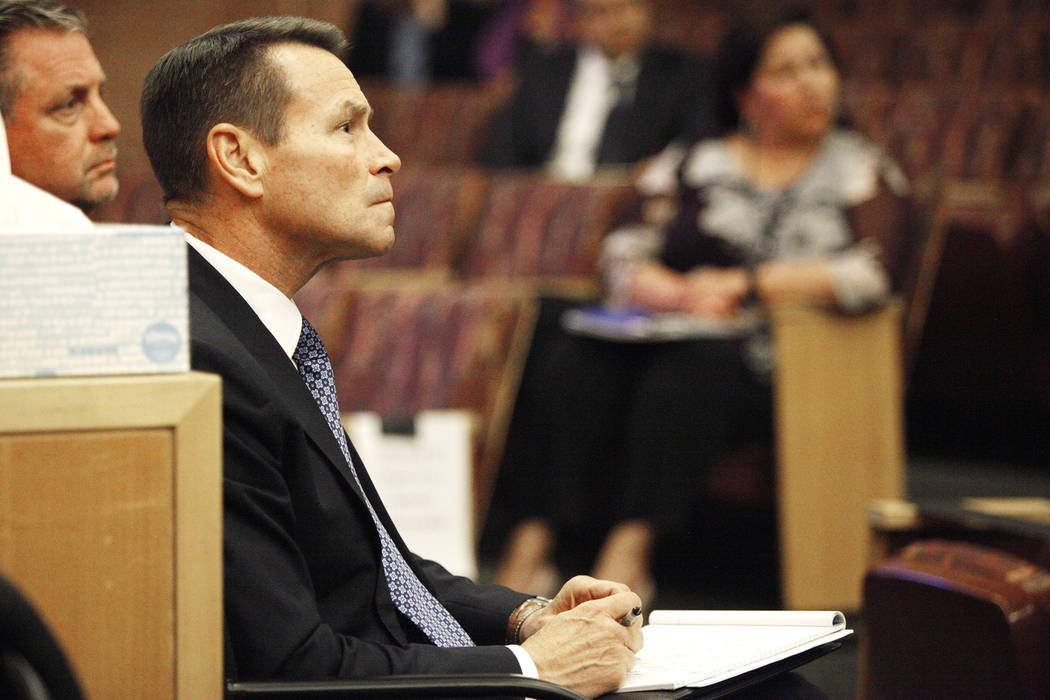 Family members of Las Vegas shooting victims and survivors will be able to submit a claim for a donation from the Las Vegas Victims’ Fund beginning in January, according to an estimated timeline by the fund committee.

The electronic claim form is slated to become available at lasvegasvictimsfund.org and at nationalcompassionfund.org. All claims must be submitted electronically.

Jeff Dion, deputy director of the National Center for Victims of Crime, gave an overview during Tuesday’s town hall meetings of what claimants can expect, as according to the current draft proposal. The Las Vegas Victims’ Fund committee is slated to adopt a final protocol Dec. 11. The committee is slated to electronically disseminate the final protocol and information on the claims process to all known claimants on Dec. 15.

In the proposal, families of those who were killed in the shooting and people who suffered permanent brain damage or permanent paralysis resulting in continuous home medical aid would receive the highest level of payment out of the fund, the draft guidelines say.

For injury claims, Dion said claimants will need to sign an authorization from their medical provider to release information to the Las Vegas Victims’ Fund committee and entities working on their behalf.

The National Center for Victims of Crime and its partners will contact a claimant’s medical provider to validate that the claimant was hospitalized from of injuries incurred at the Oct. 1 shooting.

“It doesn’t matter if you were shot, if you were trampled by the crowd — if you have suffered an injury that required hospitalization as a result of this event, that’s all we’re checking,” Dion said, adding that it will be the number of cumulative nights hospitalized. “We don’t need your medical records, don’t send us your medical records. Just sign that authorization and tell us who your medical provider was, and we’ll reach out to them and do that validation.”

In the case that somebody was injured and suffered permanent brain damage and paralysis, then the National Center for Victims of Crime will work to validate the diagnosis.

The process for death claims will be a little more complicated, Dion said.

“We need to know that we’re dealing with the right person who’s representing the estate,” he said.

If someone was killed and he or she had a will, and the person who is named as the executor of the estate is an appropriate person to submit the claim for benefits, then he or she can apply for benefits.

“If you got a will and you submit that, then we’ll say this this is the right person.”

If someone did not have a will and the person was married at the time of their death, then their spouse can apply for benefits. Dion said the National Center for Victims of Crime will be following state intestacy laws.

If the person was not married at the time of their death, then Dion said he recommends that somebody be appointed by the probate court to serve as representative of that person’s estate.

“That’s just the court telling us, ‘This is the person who is the appropriate person to deal with in regards to claims of that decedent’s estate.’ The court that would have jurisdiction over that is the probate court where the decedent lived.”

Las Vegas-based probate lawyer Jonathan Reed, with the Reed &Mansfield law firm, previously told the Review-Journal that the first step in representing an estate is to ask the probate court to name you as executor or personal representative or administrator — whichever term the decedent’s state uses.

You probably will need to file an application, a death certificate and the original will (if there is one) with the local probate court in the county where the deceased person was living at the time of death.

If the deceased person owned real estate in more than one county in the same state, one probate will suffice.

If the personal representative is not living in the state where the probate is taking place, the out-of-state resident might need to appoint a resident of the probate state to serve with them as a co-administrator.

Dion said the National Center for Victims of Crime will be looking to the probate court to direct them to the appropriate person to whom to distribute funds.

“Sometimes it might take up to 30 days or more to be appointed as personal representative,” Dion said. “Please start that process now.”

Each decedent or victim for whom a claim is submitted will be validated by the FBI as a victim of the Oct. 1 attack, he said.

“If the FBI doesn’t have you on their victim list, they’re going to send an FBI agent to talk to you,” he said.

Additionally, no money will be disbursed to anybody listed on the U.S. Department of Treasury, Office of Foreign Assets Control, Specially Designated Nationals and Blocked Persons list.

Dion said the fund is intended for anybody affected by the shooting, including first responders and people working at the event. Immigration status has no bearing on eligibility.