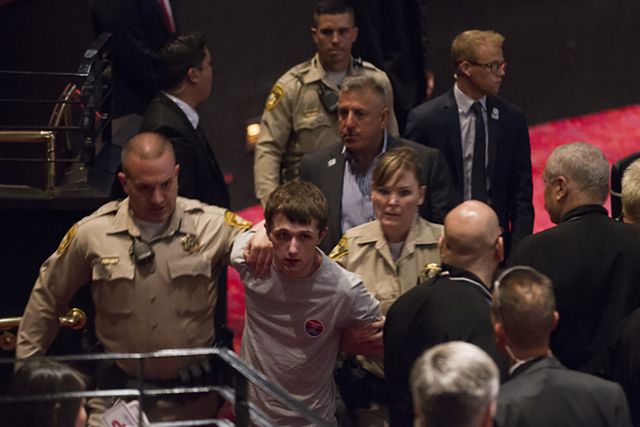 Defense lawyers have asked a federal judge to suppress incriminating statements a British man made to authorities after he was arrested in an alleged attempt to kill Donald Trump at a Las Vegas campaign rally.

Before being informed of his rights to avoid incriminating himself, Michael Steven Sandford told a Las Vegas police officer that “Donald Trump is a racist and needs to die,” a police report obtained by the defense shows.

Later, after waiving his Miranda rights during an interview with a U.S. Secret Service agent, Sandford further discussed his desire to kill Trump, likening the Republican presidential nominee to what the agent described in a report as a “modern-day Hitler who would destroy this country and the world.”

Both reports were filed with defense court papers last week seeking to bar the government from using Sandford’s statements against him.

Trump and his campaign surrogates have consistently denied that he is a racist.

Assistant Federal Public Defender Brenda Weksler said in the court papers that Sandford, 20, should have been given his Miranda warnings at the “outset of the questioning.”

“Because the use of the two-step interrogation process in this case was deliberate and because providing midstream Miranda warnings was not effective, Sandford’s statements prior to Miranda being administered and all subsequent fruits must be suppressed,” Weksler wrote.

She asked U.S. Magistrate Judge Cam Ferenbach for a hearing on the subject.

Last week, Ferenbach gave Sandford’s mother permission to arrange a unique face-to-face meeting with him inside a second-floor lockup at the Lloyd George U.S. Courthouse.

Weksler told the judge the meeting could help facilitate a negotiation to return Sandford to England for mental health treatment.

Lynne Sandford, who lives outside London, has mounted a media campaign to highlight the mental illness of her son and her concerns about his safety in federal custody in light of the issue.

Weksler contends the younger Sandford never has been incarcerated and suffers from “serious psychological problems.”

Authorities have acknowledged that Sandford has Asperger’s syndrome, an autism spectrum disorder, and Weksler said he has been on a suicide watch.

Sandford was arrested June 18 at Treasure Island, the site of the Trump rally, after he tried to grab a police officer’s gun in an attempt to shoot the presidential candidate, according to authorities.

At the time, he was living out of his car with an expired visa and allegedly told authorities that he drove from California to kill Trump.

A federal grand jury later charged him with two counts of being an illegal alien in possession of a firearm and one count of impeding and disrupting the orderly conduct of government business and official functions.

In his investigative report, Secret Service Agent Joseph Hall said Sandford told him that he was only interested in killing Trump and had no desire to harm his family members and associates.

Sandford indicated he considered buying a rifle to shoot Trump from a distance at the campaign event but was unable to acquire one, Hall alleged.

The suspect also said he thought about sneaking a knife into the rally so he could rush on stage to stab Trump but dismissed the idea, figuring he could not get past security, according to the investigative report.

Hall said Sandford claimed he does not take medication for mental illnesses and has never seen a mental health doctor.