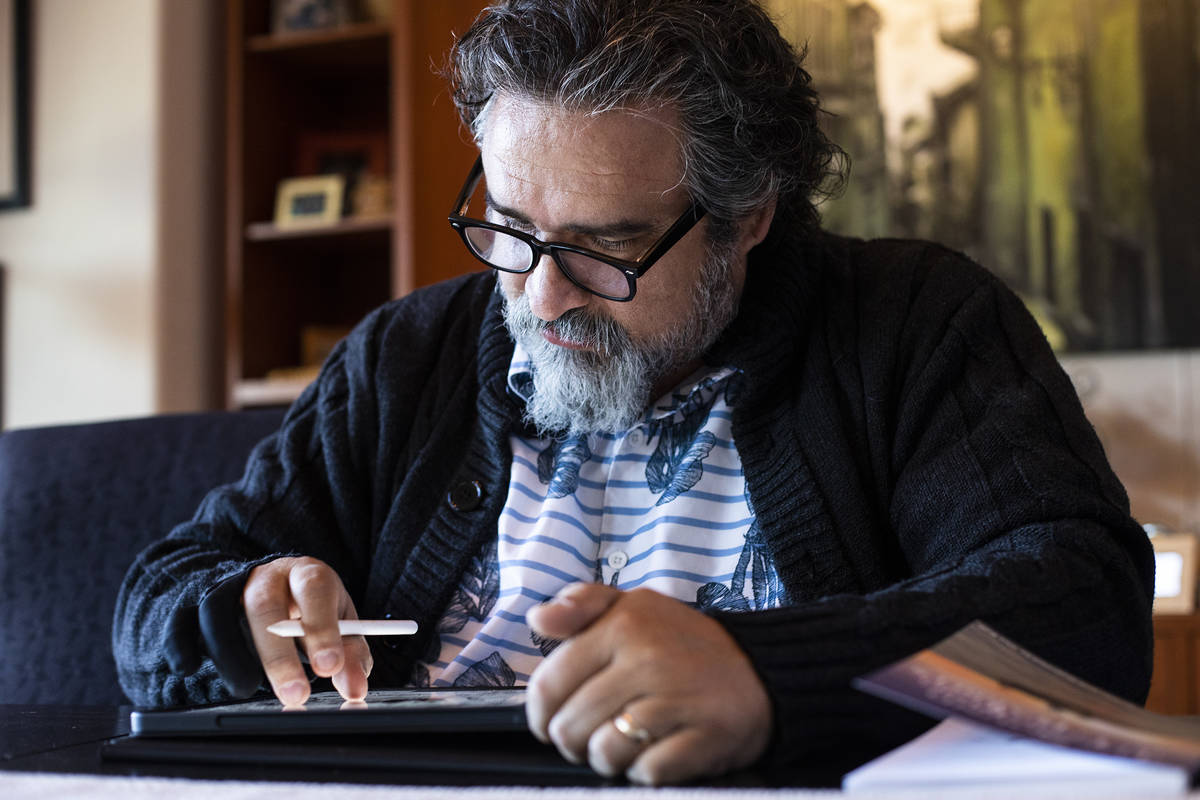 Alex Raffi draws on his iPad at his home in Henderson. He wrote and illustrated "The Sound of Laughing Rabbits," a book for children and adults, which parallels some of his life experiences. (Rachel Aston/Las Vegas Review-Journal) @rookie__rae 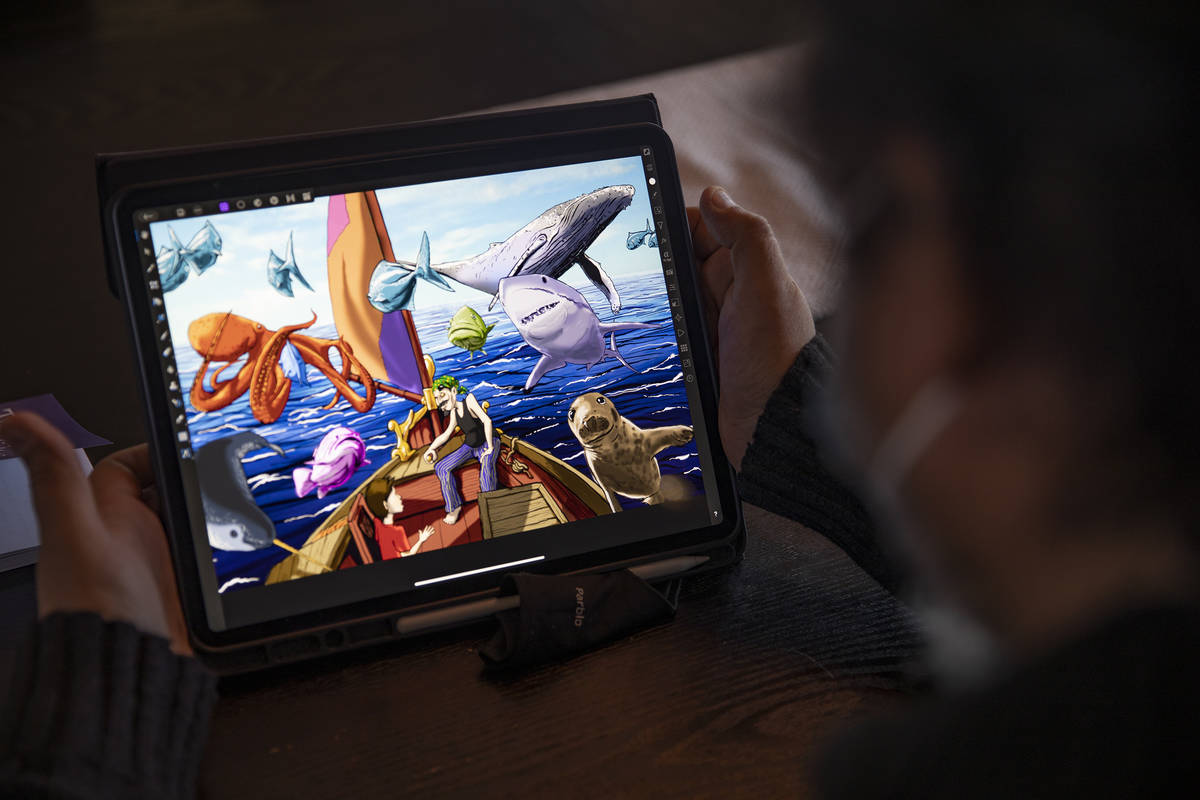 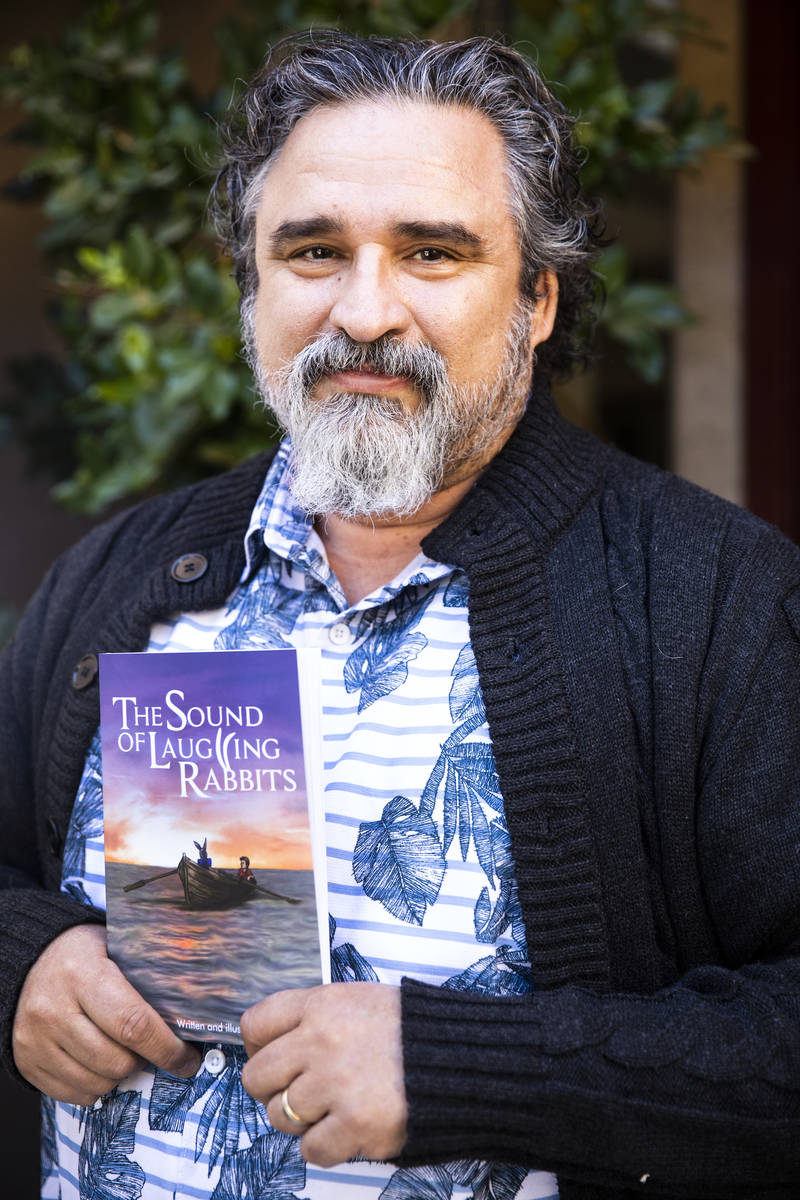 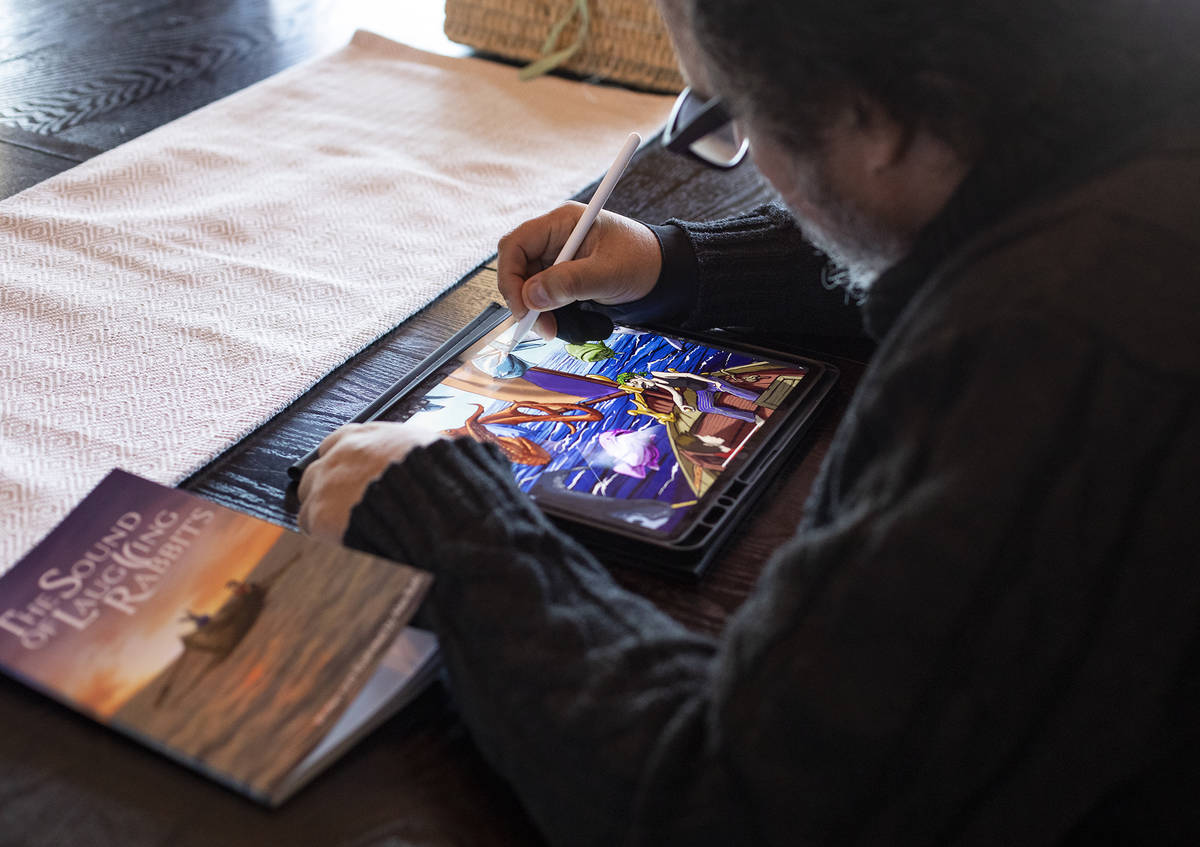 Author and illustrator Alex Raffi draws on his iPad at his home in Henderson. (Rachel Aston/Las Vegas Review-Journal) @rookie__rae

Somewhere in Alex Raffi’s life are a wise sea turtle, a female pirate captain, a failed pirate, a tiger, a girl with clockwork wings and a girl wearing a rabbit’s mask who insists that she’s not a rabbit.

And the young boy setting off on an ocean voyage on a boat called Courage? That just might be Raffi himself.

Of course, none of these characters (except for Raffi) exist in real life. But all live metaphorically, and each offer intriguing real-life lessons, as members of a sailing crew in Raffi’s book, “The Sound of Laughing Rabbits” (Amazon.com, $14.95).

Raffi wrote the story and drew the more than 50 illustrations that accompany it, and while it’s aimed at middle school-aged readers, it’s an inspirational story that any adult with a fondness for metaphor, allegory and unearthing unexpected nuggets of wisdom would enjoy.

The story “is about my life,” says Raffi, creative director and partner of Imagine Communications. Its characters and events represent specific people or moments that Raffi makes universal through metaphors on friendship, family, fear and discovery.

For the past 10 years, Raffi has been presenting workshops to adults and kids aimed at cultivating creativity. Creativity, which lies at the heart of the book, requires attempting to understand “who you are in life, looking back at your history, at moments of discovery.”

In the book’s preface, Raffi writes of a day in childhood when he dug into the dirt of his yard with his bare hands.

“I had a moment of realization that I was alive and enjoying the perfection of that afternoon,” Raffi says. “We all have these amazing moments of discovery that shape who we are as we grow.” His book is “basically a recapping of those moments … explained in metaphor.”

The boy “represents me, or everyone or everyman, who decides to break away from the safety of parents and go on a journey into the world. His boat is his life and the ocean is the world,” Raffi says.

The unusual characters the boy meets relate to specific people, memories or themes. The female pirate captain, for example, is the boy “further along in life,” Raffi says.

And the little girl in the rabbit mask?

“She’s a very powerful character in the book. She means a lot to me personally,” Raffi says. “Her strength is important to me. But I didn’t want to overtly explain everything in the book. I wanted to create some moments that are relatable. I’m very pleased parents are enjoying it as much as kids are.

“When I sign the book, it’s always, ‘Enjoy your journey and take care of your crew.’ The people (in your life) are your crew,” Raffi says, “and you need to take care of them.”

Some publishers and agents have called its vocabulary too sophisticated, Raffi says. While the story is aimed at youngsters, he was determined not to dumb it down. So, Raffi was pleased to hear from a mother that her daughters love the book and read it with a dictionary so that “everything they don’t know they looked up.”

Writing the book was “kind of cathartic for me,” Raffi says, and drawing and writing each spurred the other.

“I have kind of a duel with the two. One feeds the other,” he says, estimating that he drew about three times as many illustrations than appear in the book.

He hopes the story will encourage others to recognize and savor moments of discovery in their own lives, and that it will be read over and over as children grow up so that they can “start seeing different things in the story.”

It’s a personal story, but one with themes broad enough to resonate with anybody, so Raffi wasn’t worried that others might have trouble understanding what he was trying to say.

“I realized it’s not as important if people get it or not. More important to me was people enjoying the story.”

In the end, Raffi says, “I wrote the book I would like to read as a kid.”