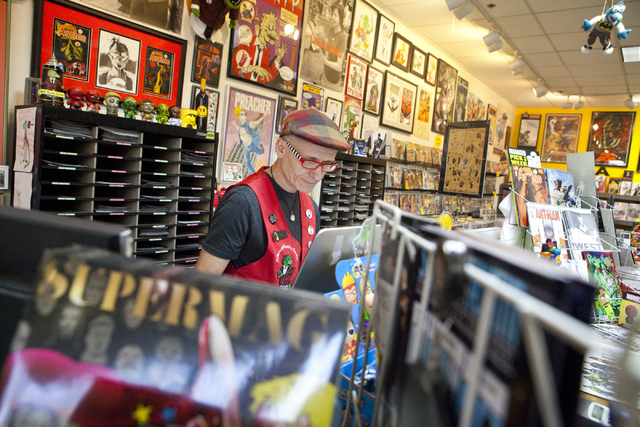 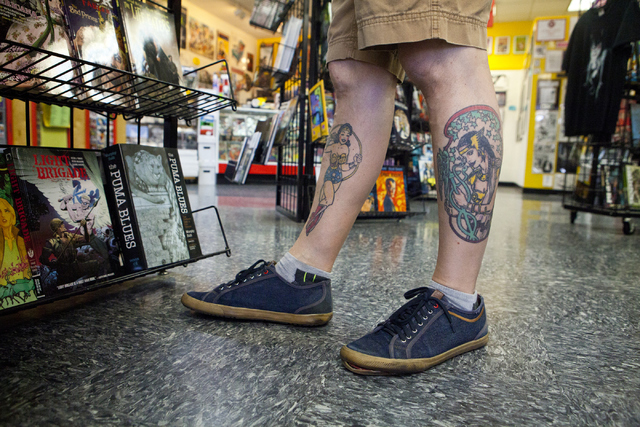 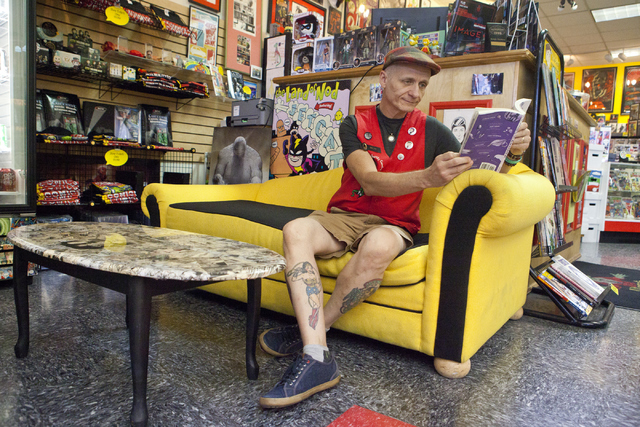 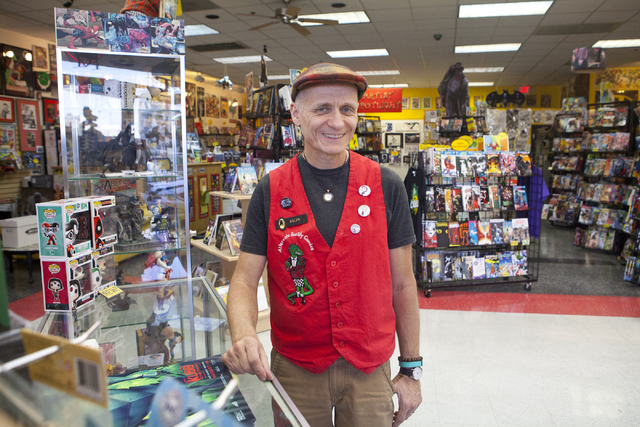 Ralph Mathieu not only sells comics, but is an ardent advocate of the medium. (Loren Townsley/Las Vegas Review-Journal) Follow @lorentownsley

Ralph Mathieu has been a fan of comic books for most of his life. And, like that guy who leaps over tall buildings in a single bound or that other guy who climbs walls like an insect, he’s been able to accomplish something that makes him unique among comic book fans.

He’s turned his interest in comic books into a job that involves, in large part, actually reading comics for a living.

Mathieu is owner of Alternate Reality Comics, 4110 S. Maryland Parkway, Suite 8. He bought the store where he once was a mere employee in 1995. In a retail landscape littered with the never-to-be reanimated corpses of comic shops that have come and gone, Alternate Reality Comics has become a rare commercial survivor and Mathieu the unofficial godfather of Southern Nevada’s comic book universe.

Mathieu, 54 — “Six months older than Spider-man,” he notes — has been a comic book reader since he was 13 years old. He’s the third owner of Alternate Reality Comics — longtime local comic book fans might remember when it was called Dungeon Comics — and not only is Mathieu a merchant, but he’s also a comic book scholar of sorts who can discuss Marty Pasko’s tenure on “Swamp Thing” or the evolution of Neil Gaiman’s writing while still evidencing symptoms of incurable fandom.

As a comic book fan and comic book store owner, Mathieu is a champion of the medium who enjoys introducing fans and newcomers to everything from classic superhero titles to the more mature, drama-filled direction in which creators now routinely take the medium.

Review-Journal: What was your own introduction to comics?

Mathieu: I was 13. I saw some of the horror anthologies of DC — “House of Mystery,” “House of Secrets.” Then I saw ads for their superhero comics and thought, “I’ll try those out.”

R-J: So you didn’t even start out with superheroes like most people do?

R-J: What was it about comic books that appealed to you?

Mathieu: It was just all the different kind of stories that were being told. Back then, it was mostly superheroes, but it was also something to look forward to the next chapter of your favorite monthly title. But, going back to my initial interest in those “House of Mystery” and “House of Secrets” — and I still love superhero comics — I always look for comics that can tell any kind of story. My store kind of reflects that. There’s (comic books about) history, biography, drama, horror, science fiction, crime fiction, just like regular (nonillustrated) fiction.

R-J: Did you ever have any aspirations to work in the comics industry?

Mathieu: I first thought that maybe I’d be an artist or a writer. I tried both of those things and didn’t have the chops for those. Then, in the late ’80s and early ’90s, my friend who was managing the store that I now own and the second owner … offered it to me, and I was, of course, (interested in) any opportunity I could get to share my love of comics.

R-J: Have non-comic book readers gotten hip to the notion that comic books are about way more than just superheroes?

Mathieu: Yeah, more so with the different kinds of movies over the years that have come out, like “Road to Perdition,” “Ghost World,” “V for Vendetta” and “Scott Pilgrim,” that have definitely whittled away at that and the interest in comics — in words and pictures — that comics encompass.

R-J: So are comic books getting more respect than, maybe, they used to?

Mathieu: Very much so. And it started in the ’80s with Art Spiegelman’s “Maus” (about the Holocaust) and Marjane Satrapi’s “Persepolis” (about growing up in Iran during the Islamic revolution). Then, (a stage adaptation of) “Fun Home” by Alison Bechdel won a Tony Award for best musical last year.

R-J: You’ve been involved in comics retailing as a store owner since 1995 and you’ve seen the ups and downs of comics retailing here over the years. What’s the Las Vegas landscape like these days?

Mathieu: Las Vegas does have about 13 stores now. A few years back, someone had a poll looking at, like, the geekiest cities in the U.S., and Las Vegas was No. 7, and one criterion was the number of comic stores.

R-J: Have the movies that have been adapted from comics helped to give comic books a higher profile?

Mathieu: “Deadpool” was a lot of fun. That was a character I never really connected with. The movie was something different right from the start. And, to me, that also shows that (a comic-based movie) desn’t have to cost $100 million. It wasn’t done with a big movie budget.