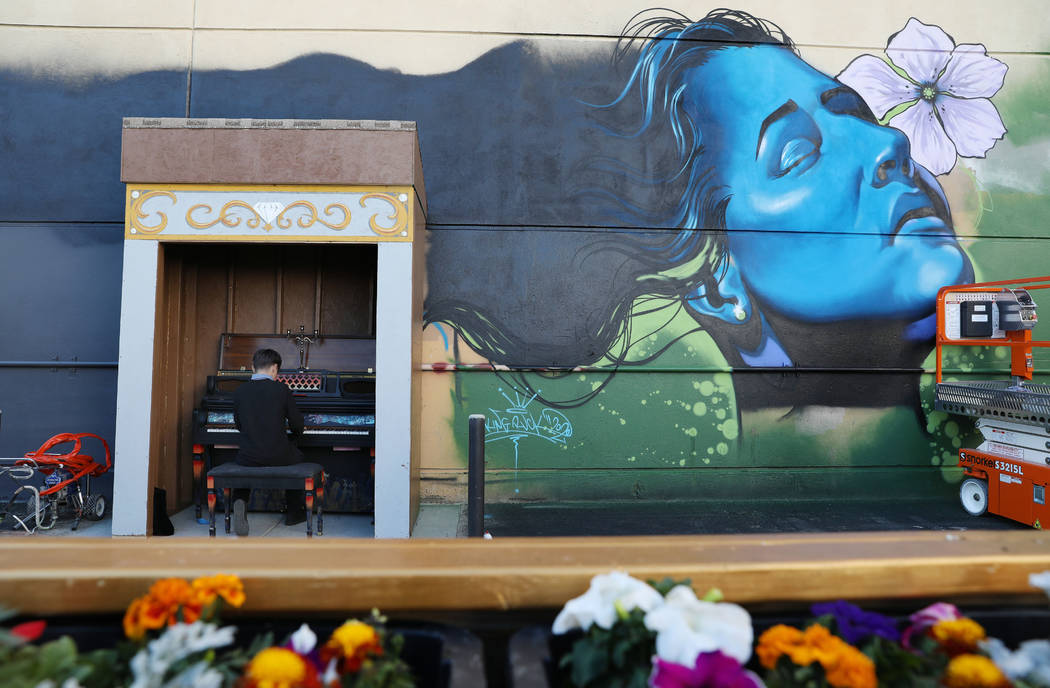 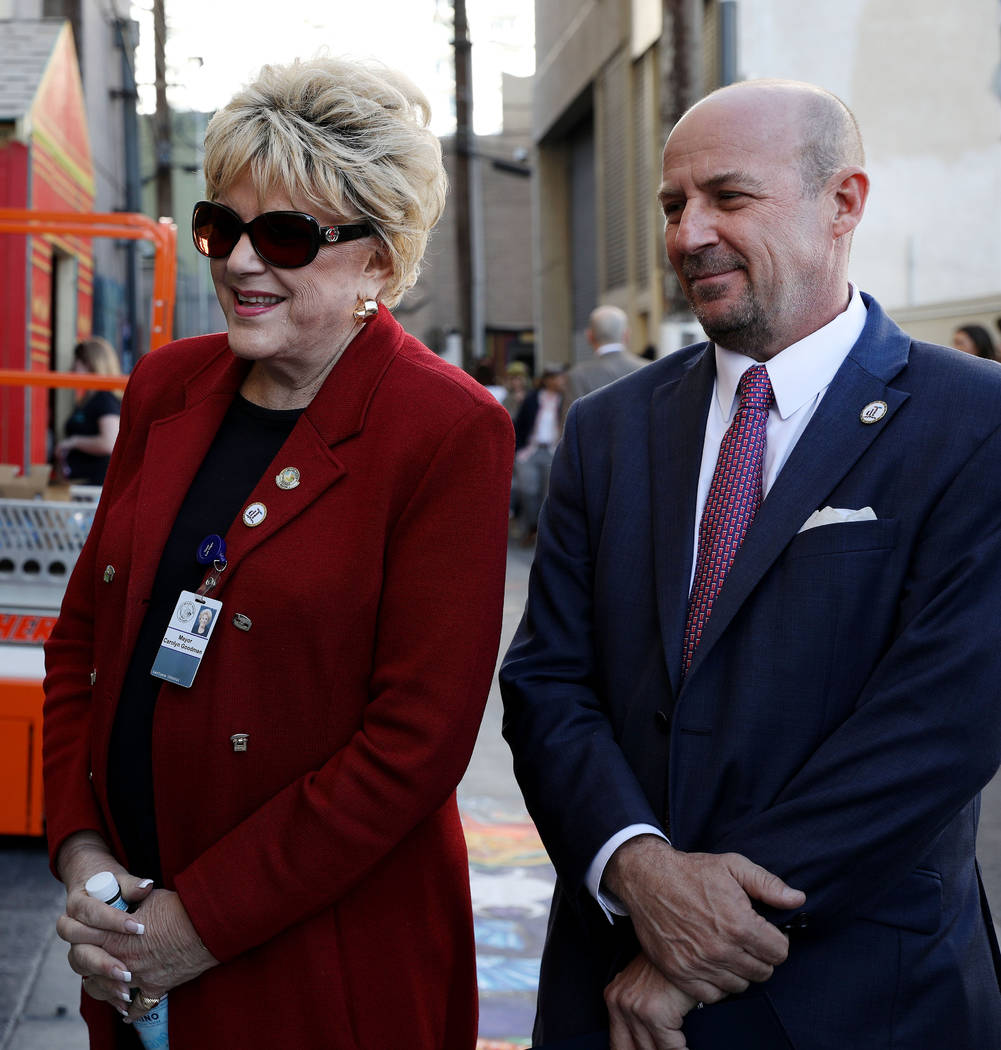 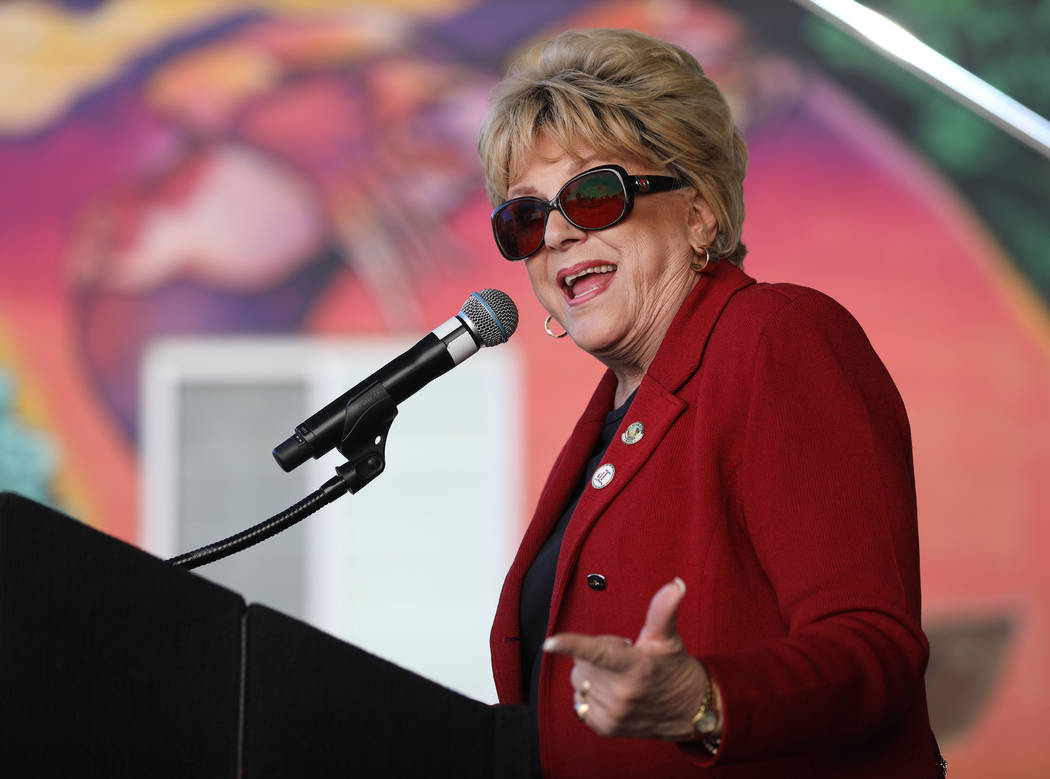 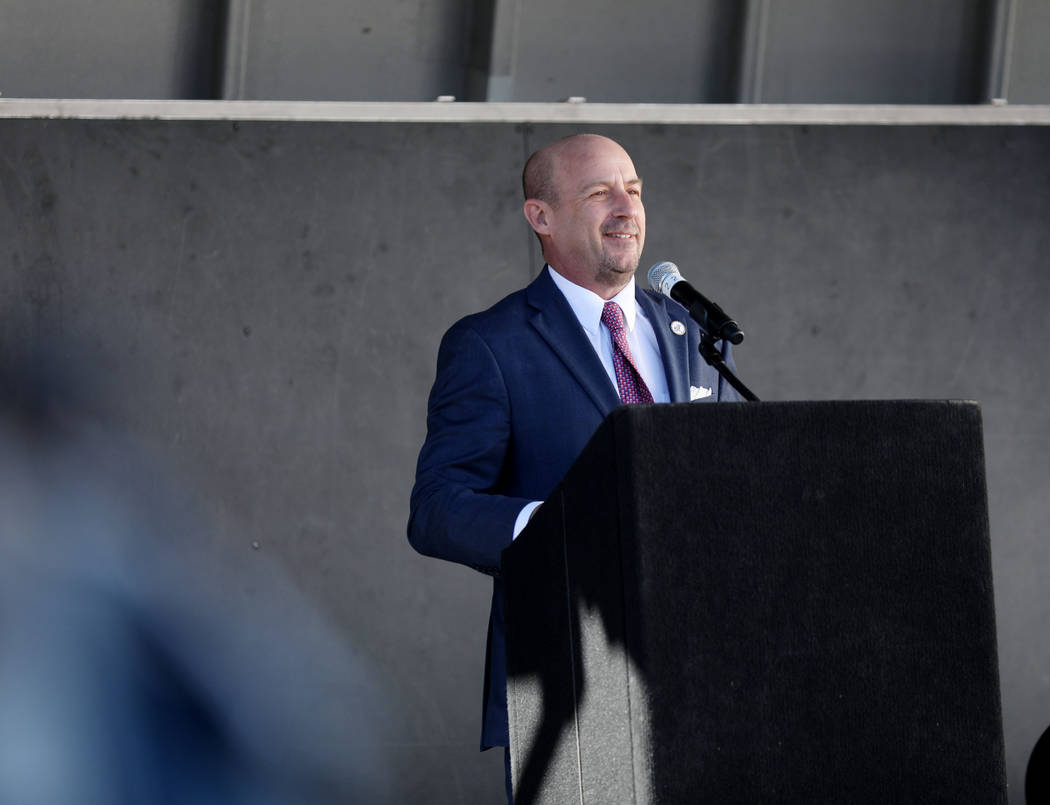 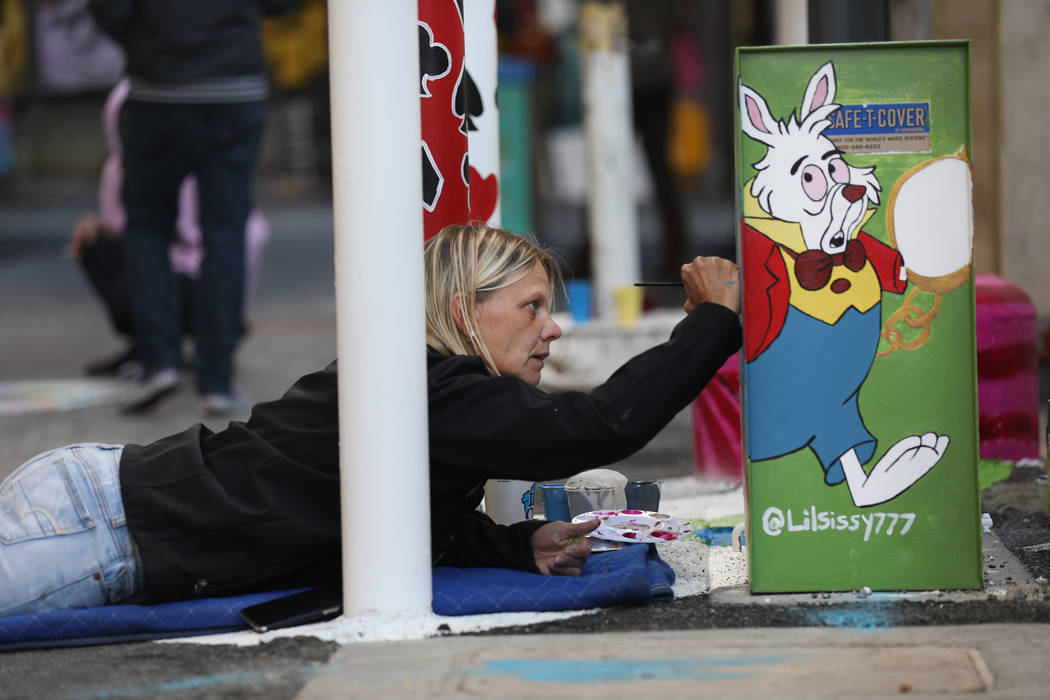 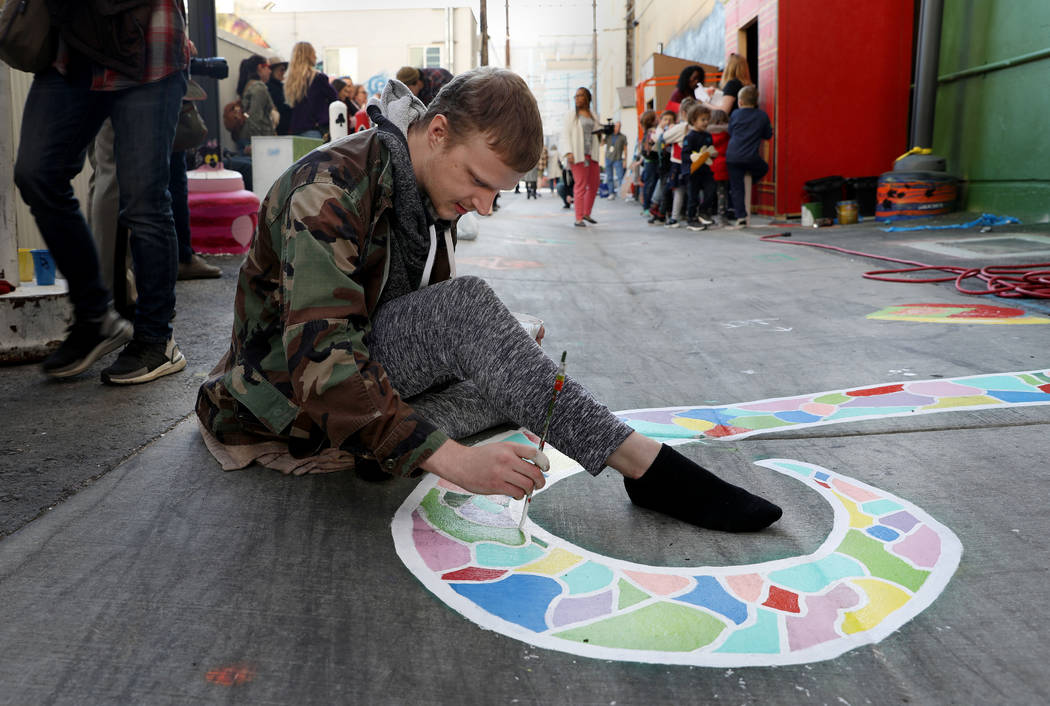 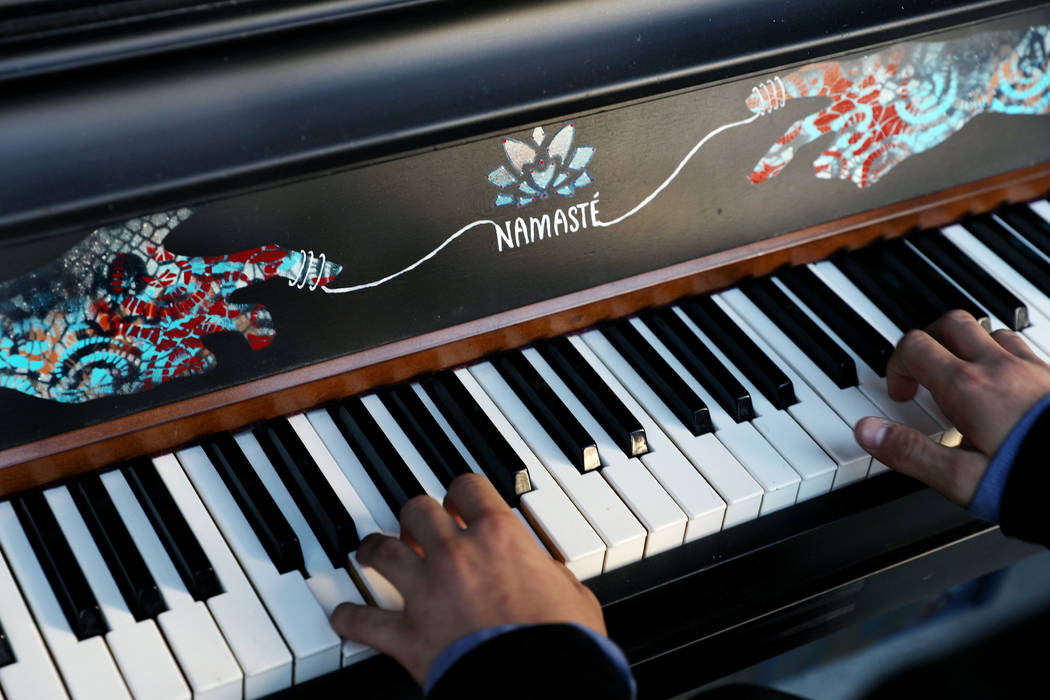 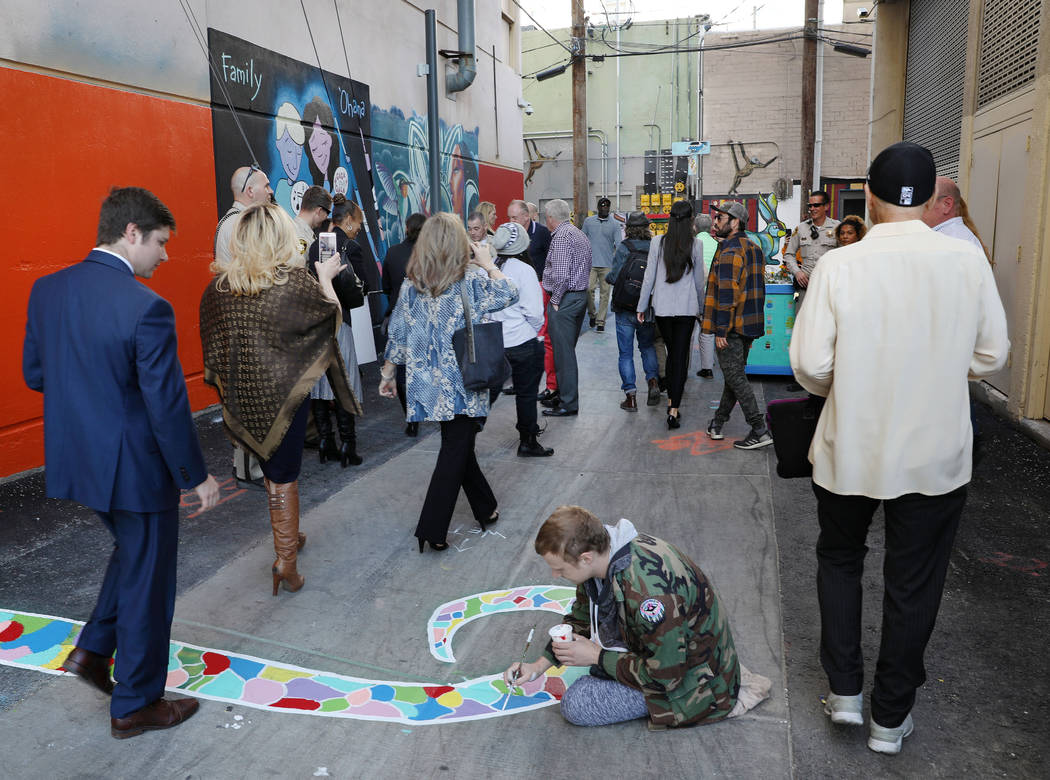 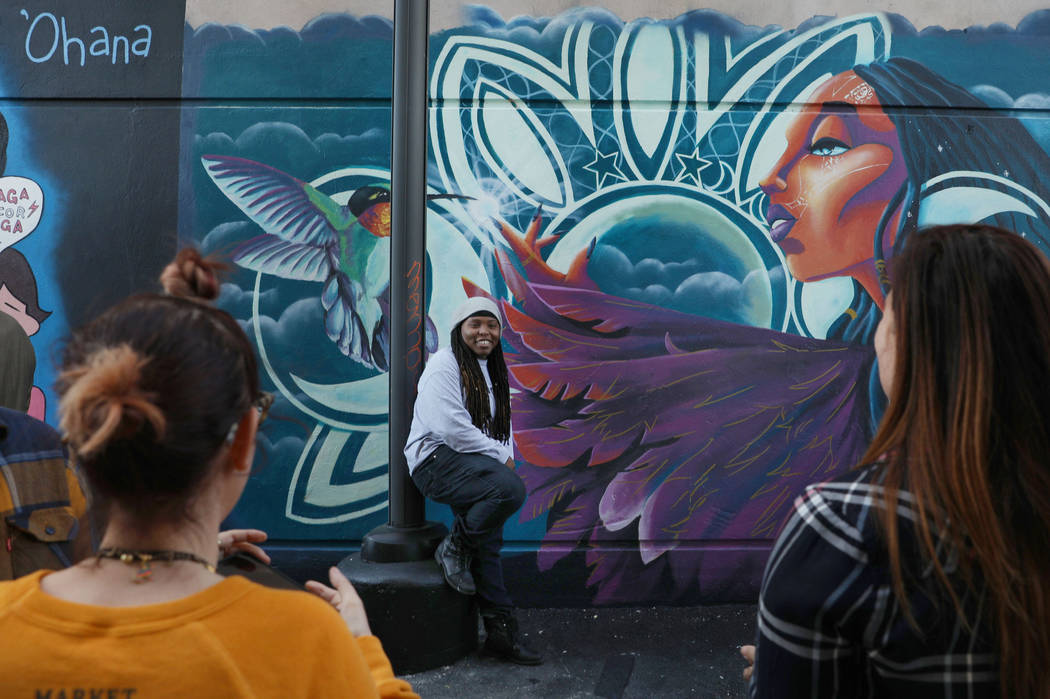 Local painter Sloane Siobhan is photographed in front of her mural during the grand opening of dT-Alley in Las Vegas on Thursday, Feb. 20, 2020. (Elizabeth Page Brumley/Las Vegas Review-Journal) @EliPagePhoto 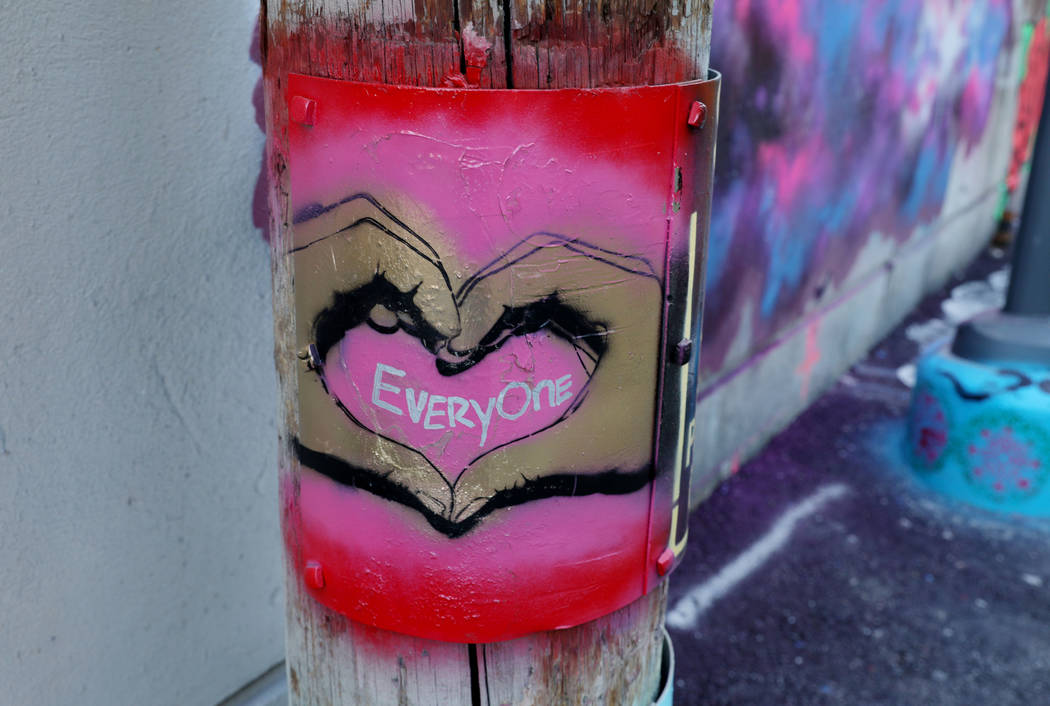 A painting is seen during the grand opening of dT-Alley in Las Vegas on Thursday, Feb. 20, 2020. (Elizabeth Page Brumley/Las Vegas Review-Journal) @EliPagePhoto 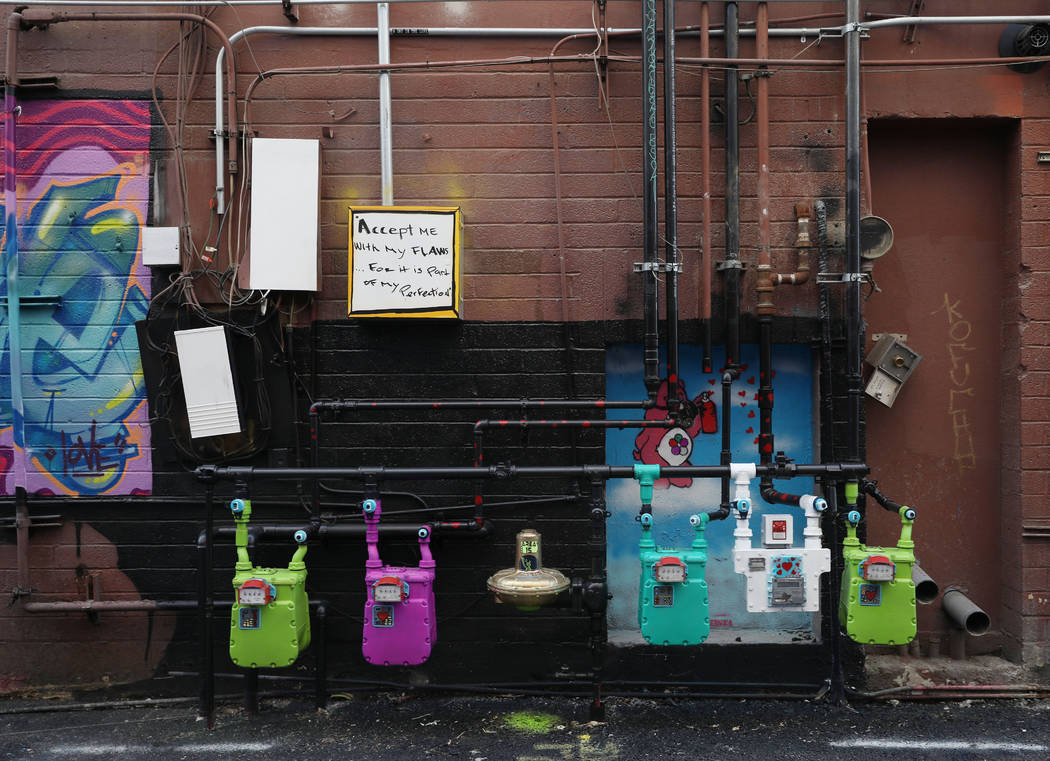 The T-shaped alleyway that runs behind a row of bars and restaurants on Fremont East has never been the type of area a visitor would think to explore.

A new project by the dT Alley Community Coalition Inc. has revitalized the alley, adorning its concrete walls with vibrant murals, transforming utility boxes into whimsical creatures and replacing the dumpsters with flower boxes and interactive pop-ups.

“I stumbled upon this project about eight years ago,” says Todd Kessler, president of the nonprofit program. “Each tenant had dumpsters and it would attract dumpster divers and a lot of debris related to that. I figured out a way to centralize the trash. That opened it up for more thoughtful things for (the alley)

Kessler devised a plan to swap out the dumpsters for industrial rubbish carts that are cordoned off in a section of the parking lot on Sixth Street between Fremont Street and Carson Avenue. The carts are then wheeled half a block to the Fremont Street Experience’s trash compactor.

With the new space, Kessler set out to use the outdoor area as a community gathering venue called the Downtown Alley, stylized as dT Alley. He started by putting out a call for artists at First Friday and on social media.

Artists such as Sissy Murphy responded. At Thursday’s ribbon-cutting ceremony, Murphy worked on her “Alice in Wonderland” painting that covers an electrical box and an adjacent streetlight. Her son, 26-year-old Hunter Wilson, claimed a nearby telephone pole where he designed a multicolored snake that slithers down onto the pavement.

“Everything was kind of dark,” says Wilson, citing the moodier hues in the surrounding murals. “I wanted to do something really bright and colorful.”

Several artists worked in the days and weeks leading up to the grand opening to line the walkways with paintings and interactive installations.

The 9th Bridge School in downtown Las Vegas tends to a take-one, leave-one library that has about 30 volumes. Other installations include a community piano, a puppet theater and confessional in which visitors are encouraged to share secrets.

At one end of the alley is a mailbox where visitors can contribute wish cards to the third Las Vegas iteration of the Life Cube, a public art project in which tens of thousands of wishes will be affixed to a large wooden cube and burned with the hope that they will come true.

The dT Alley opening follows recent art-focused renovations in the downtown area including the opening of Fergusons Downtown, the installation of the Golden Goose on Fremont Street and a new large-scale mural on the Western Motel.

“This is about culture and art and entertainment, music and creativity,” Mayor Carolyn Goodman said at Thursday’s ribbon-cutting. “We are setting records around this country about innovative things that we’re doing and everybody looks at Las Vegas.”