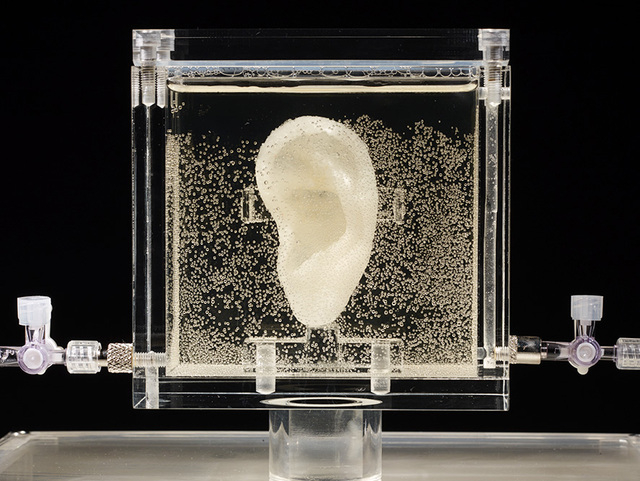 Undated picture shows an ear made of human cells grown from samples provided from a distant relative from Dutch artist Vincent van Gogh, in the center for art and media in Karlsruhe, Germany, Tuesday, June 3, 2014. U.S.-based artist Diemut Strebe said she wants to combine art and science with the installation. (AP Photo/Diemut Strebe.Sugababe)

BERLIN — A German museum has put on display a copy of Vincent van Gogh’s ear that was grown using genetic material provided by one of the 19th-century Dutch artist’s living relatives.

The Center for Art and Media in Karlsruhe said artist Diemut Strebe made the replica using living cells from Lieuwe van Gogh, the great-great-grandson of Vincent’s brother Theo.

Using a 3D-printer, the cells were shaped to resemble the ear that Vincent van Gogh is said to have cut off during a psychotic episode in 1888.

“I use science basically like a type of brush, like Vincent used paint,” Strebe told The Associated Press in a telephone interview Tuesday.

The U.S.-based artist said the ear, which was grown at Boston’s Brigham and Women’s Hospital, is being kept alive inside a case containing a nourishing liquid and could theoretically last for years.

Lieuwe and Vincent van Gogh share about 1/16th of the same genes, including the Y-chromosome that is passed down the male lineage.

But hopes of using genetic material that belonged to the post-Impressionist master himself were dashed when DNA extracted from an envelope turned out to belong to someone else. “The postman messed it up,” Strebe joked.

Still, work is underway with a female relative to include mitochondrial DNA — passed down the mother’s line — for future installations.

The exhibition, at which visitors can speak into the ear through a microphone, lasts until July 6. Strebe said she plans to display the ear in New York next year.