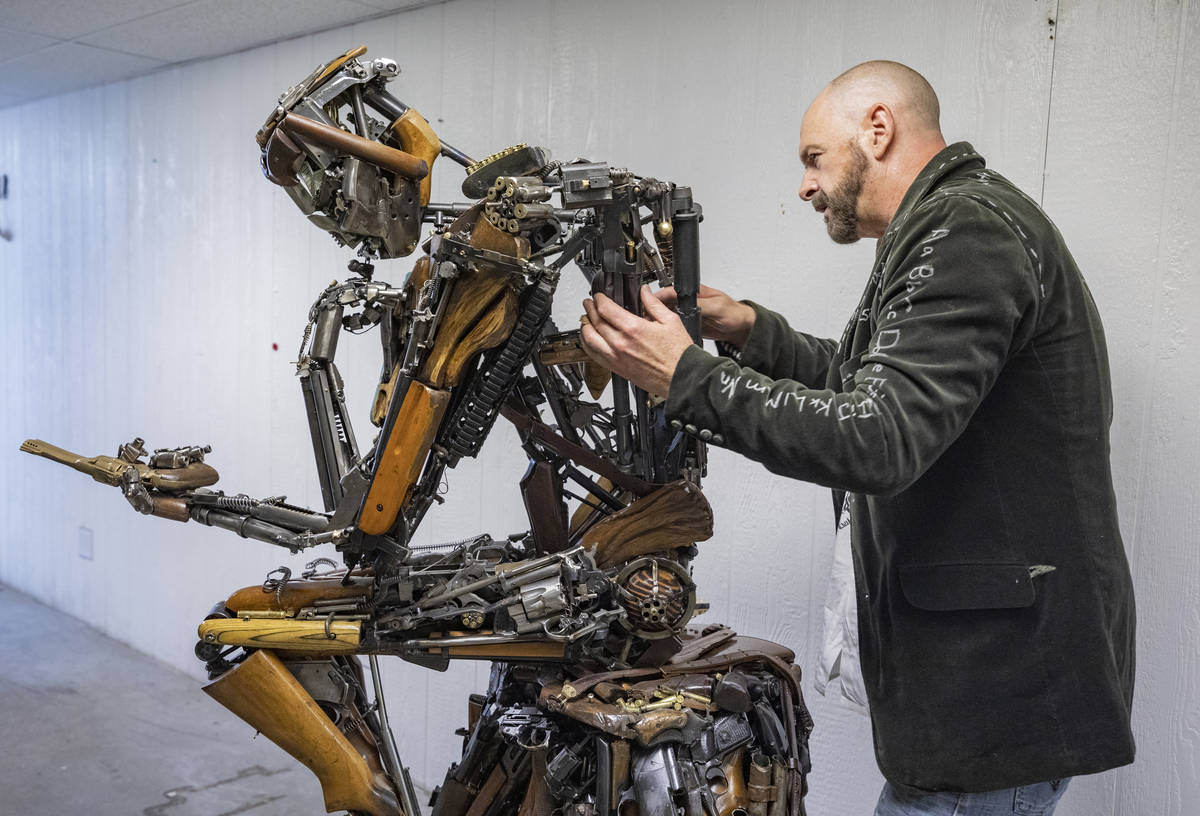 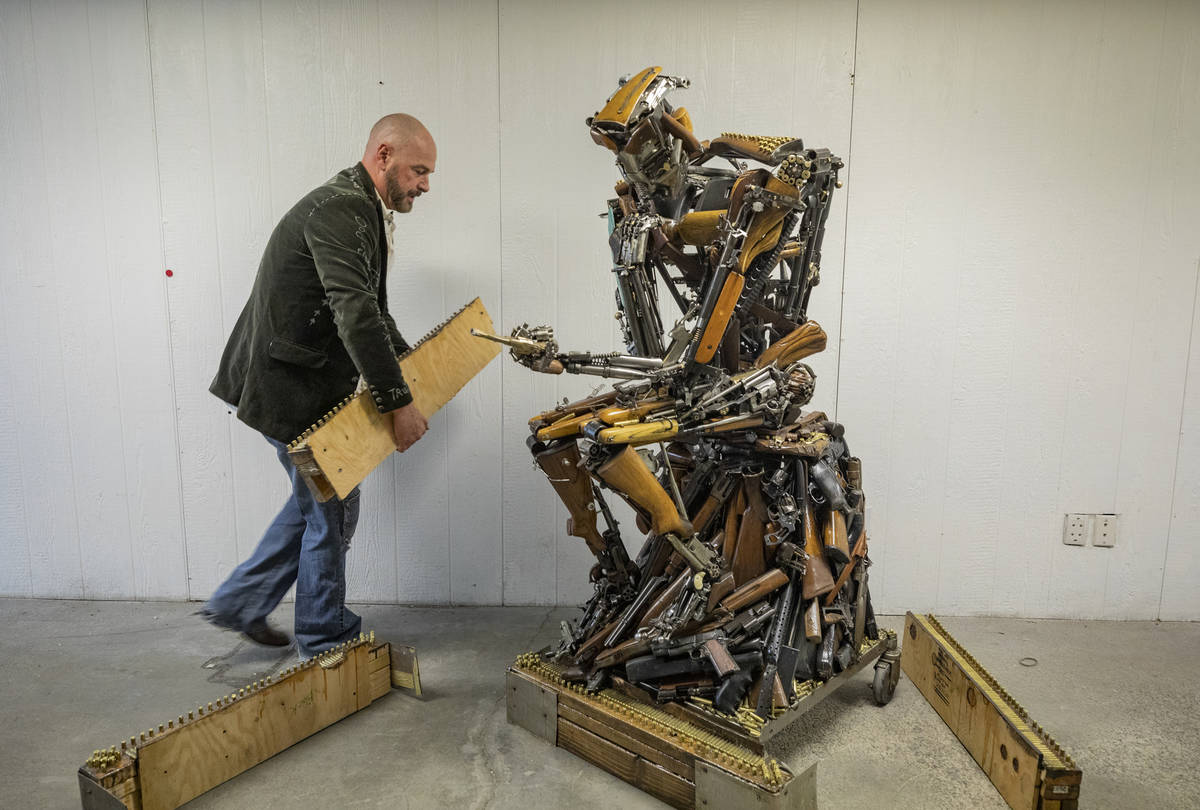 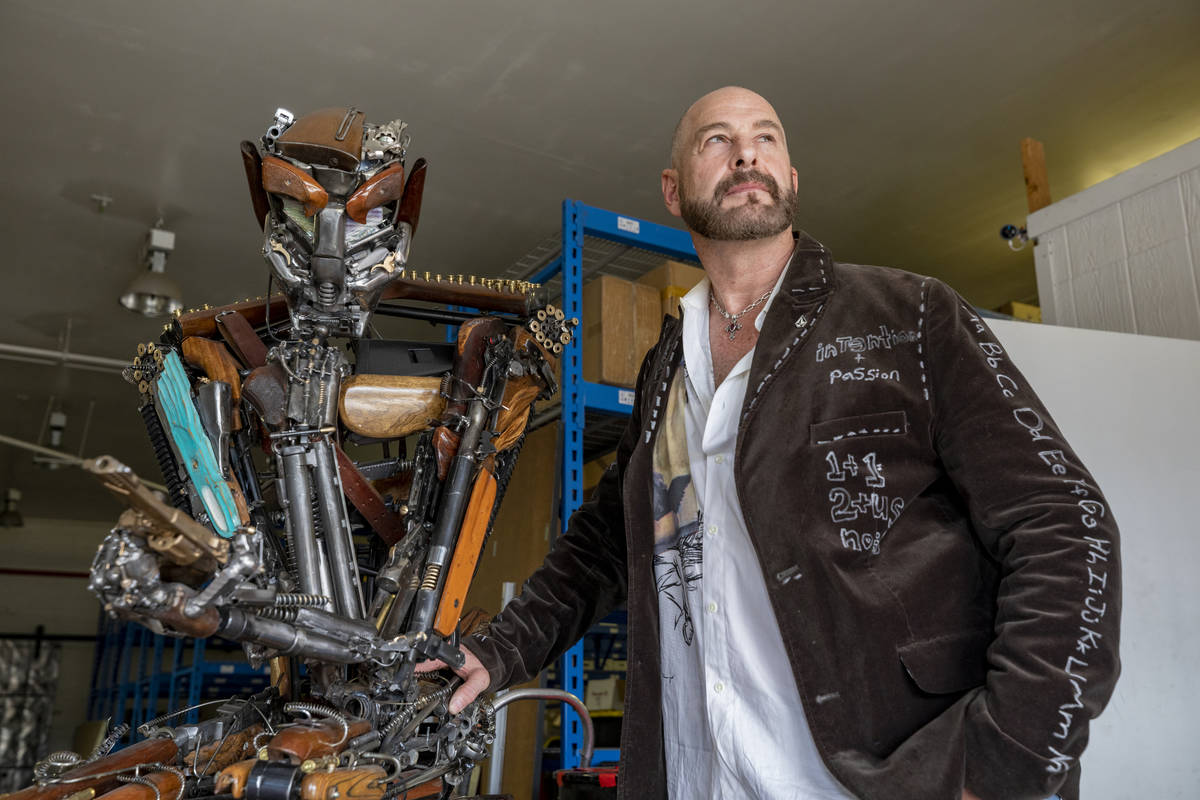 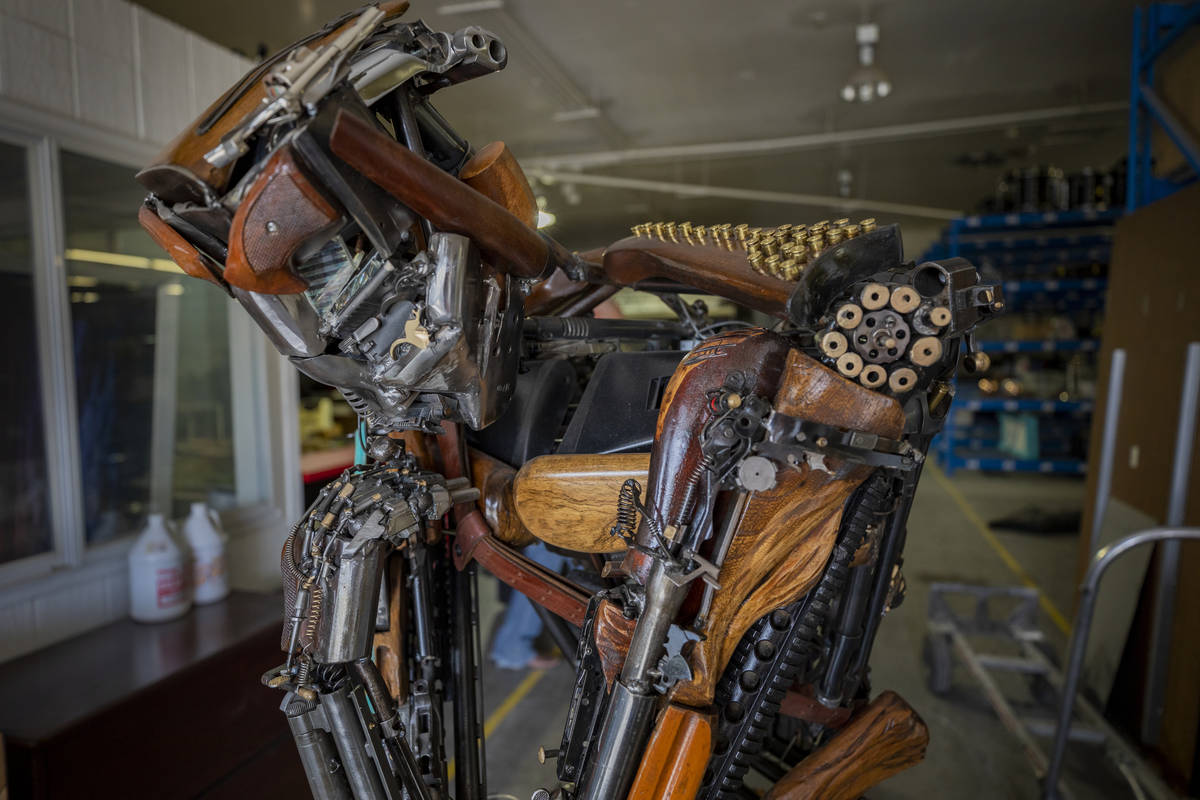 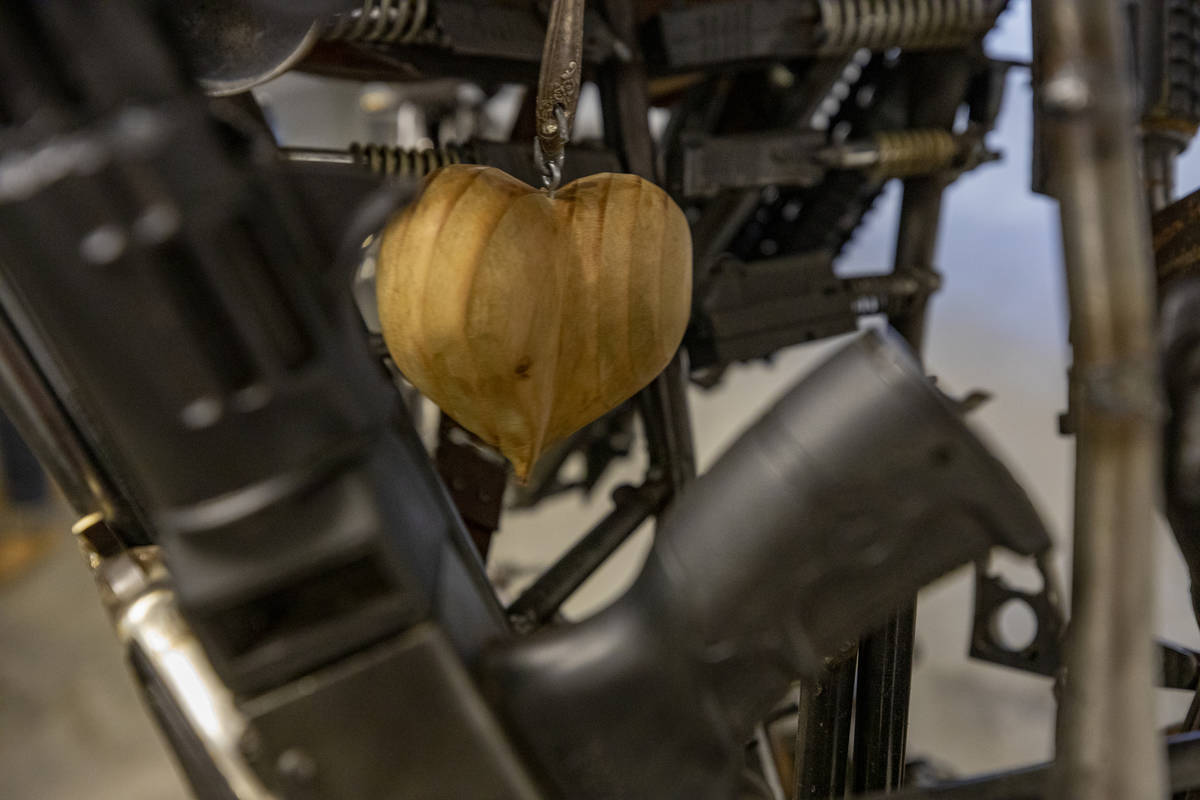 A wooden heart is seen in the chest of David Fay's sculpture commissioned by Indecline titled 'Second Thought,' created in honor of the 58 Route 91 Oct. 1 victims, in a warehouse in downtown Las Vegas on Monday, Sept. 21, 2020. (Elizabeth Page Brumley/Las Vegas Review-Journal)

Using 600 decommissioned guns from a New Mexico-based group, a Las Vegas artist has created a sculpture to be displayed in downtown Las Vegas on the third remembrance of the Oct. 1 Route 91 massacre.

Artist David Fay created the one-of-a-kind sculpture, titled On Second Thought, almost entirely out of gun parts and ammo, playing off the classic The Thinker sculpture created by Auguste Rodin.

“I think it (the gun debate) needs to be thought of more,” Fay told the Las Vegas Review-Journal. “I’ve never had so much of the same thing to work with, in so much quantity. It was an amazing project.”

The art piece stands 6 feet tall, weighs 250 pounds and took 750 hours to create out of the hundreds of firearms, which were bought last year.

The art piece will be on display Oct. 1 near Park on Fremont in downtown Las Vegas.

The sculpture was commissioned by an anonymous “activist art collective” called Indecline. The group says on its website that it comprises “graffiti writers, filmmakers, photographers and full-time rebels and activists” and that it focuses on social, ecological and economical injustices. The group requests anonymity because some of its work involves illegal activities.

The network describes itself as a nonprofit collective and “not an anarchist group” on its website, which sells clothing and other items to pay for its projects. Among the items for sale are T-shirts that say “Shoot cops” with an image of a camera with crosshairs in the lens and a riot stick, described as a “durable and menacing 11-inch tactical baton.”

The group may be best known for another sculpture project it commissioned: five life-size, nude statues of Donald Trump erected in August 2016 when he was the Republican candidate for president. It also took credit for vandalizing a billboard on Interstate 15 that advertised a Las Vegas shooting range.

“Our goal is to not offend anybody,” said Indecline member “N”, who agreed to be interviewed only if his identity was kept confidential, referring to the new statue. “Our goal is to honor the people whose lives were affected (by the Oct. 1 shooting) by giving them true action, true meaningful action to change the situation.”

During a meeting at a downtown warehouse this week, Fay said he has shown the sculpture to 10 people he knows who were at the 2017 Route 91 Harvest festival when the shooting occurred and they all thought the piece was well done.

“I think you leave it up to the thinker, the people who are viewing the piece to decide what it is,” Fay said.

Also, 1,100 bullet casings line the wooden frame at the base of the sculpture, the approximate amount of rounds fired into the crowd by the gunman perched above at the Mandalay Bay.

The art piece has moving parts to it, with two clock mechanisms strategically placed inside the body of the sculpture to stimulate thought.

“It’s 100 percent guns, except for the clock mechanism itself,” Fay said. “Any of the shaved wood pieces came from the gun butts.”

Although Indecline supports gun reform, the group didn’t want to send out a message tied to the statue.

Members want those who see it to do what the piece is intended to inspire — think.

In particular, the group hopes the art piece will inspire others to think more about the gun debate in the U.S.

“Obviously the gun debate is something that we as a country have a lot, where there’s a lot of emotion, where maybe thought would be better,” “N” said. “Our main response to Oct. 1st was a hashtag, #VegasStrong, and a campaign for a hockey team to win us a Stanley Cup. Although both are beautiful symbolically, they don’t do a lot to further the actual debate.”