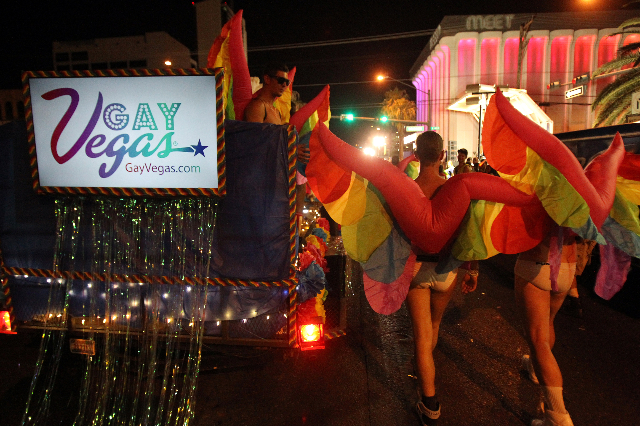 At next weekend’s PRIDE Festival, the art scene will show its colors with an emotional tribute: The installation “We Are Orlando” will honor the 49 people killed during the Orlando nightclub shooting in June. The last survivor was released from the hospital in early September, more than three months after the attack.

The “Orlando” installation is an 8-by-8-foot chalkboard-finished heart with #WeAreOrlando emblazoned in a rainbow hue across the front and back. The victims’ names will be painted around the perimeter of the heart, and visitors will be encouraged to write their own message of support on the piece in colored chalk. Later, the chalk will be sealed.

In addition to the “Orlando” installation, the art element of the PRIDE Festival will include pieces from local artists as well as live interactive performances such as juggling. Works also will be available for purchase.

“A lot of the pieces are made for this event specifically,” said Brady McGill, Las Vegas PRIDE executive director and secretary. “It’s designed to be crafty and unique.”

Thirty-four-year-old local performance and design artist Jacob Muehlhausen, who recently designed a dress for the Circus Couture charity fashion show, developed the concept for “Orlando” after attending Pride festivals in San Francisco and Denver this summer.

“I work in live entertainment and theater, and when I saw people writing on the sidewalk in chalk contributing to a street memorial, it really moved me,” Muehlhausen explained. “It’s really healing as a community to share grief and stories and hopes and dreams and love.”

Although past years have included an art component, McGill said this year is the beginning of an expansion. “The element that we’re having with the interactive art piece (‘Orlando’) is designed to get attention and participation, and contribute to the community in the end.”

Growing the art side of the festival in upcoming years is a goal, McGill added.

As for the “Orlando” installation, plans are in the works to put it on permanent exhibit. Both McGill and Muehlhausen hope it will remain local, though they can’t say for sure.

“I thought it would be great for Las Vegas, where the city is changing from a touristy destination to more of a city with a community,” said Muehlhausen.

McGill agrees: “The most likely goal would be it living somewhere like our LGBT center, but we’re open to anything.”

The festival will run from noon to 10 p.m. Saturday and 11 a.m. to 6 p.m. Oct. 23 in Sunset Park near Eastern Avenue and Sunset Park Road. The art exhibit will be housed in the northeast corner of the festival grounds. Admission is $10 for adults ($15 for a two-day pass), $5 for children ages 8 to 17 and free for children 7 and younger.