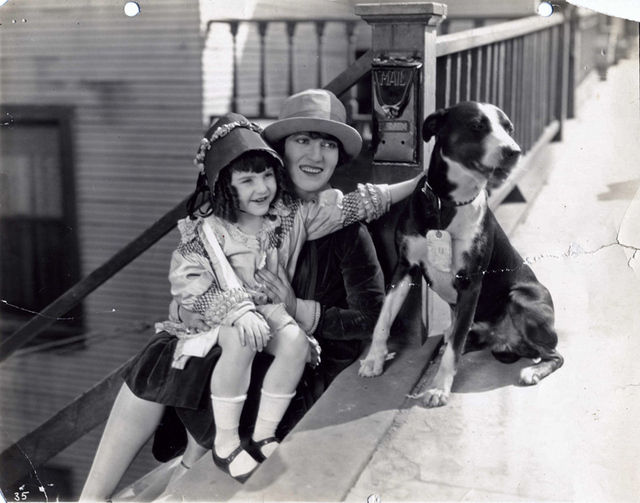 Lassie Lou Ahern, left, and Helen Holmes made two movies together: 1925's "Webs of Steel" and "The Lost Express." Ahern, now 96, is one of the last surviving performers from the silent era. (Courtesy Jeffrey Crouse) 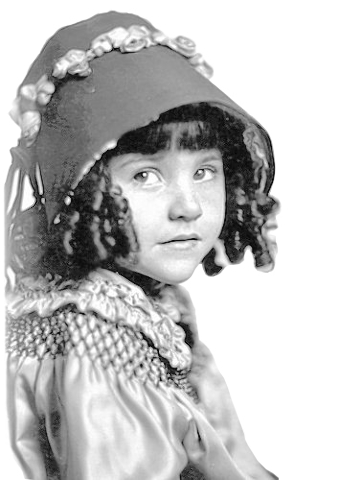 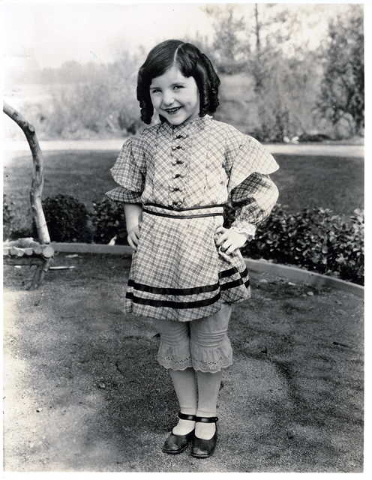 Lassie Lou Ahern as Little Harry in the 1927 epic "Uncle Tom's Cabin." Ahern, one of the last surviving links to silent movies, is the subject of a a documentary and restoration effort spearheaded by Nevada State College film historian Jeffrey Crouse. (Courtesy Jeffrey Crouse) 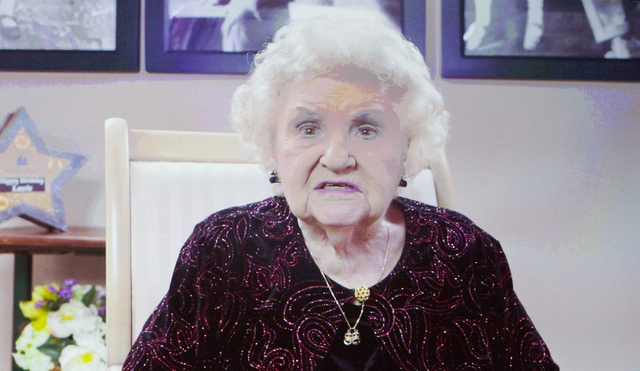 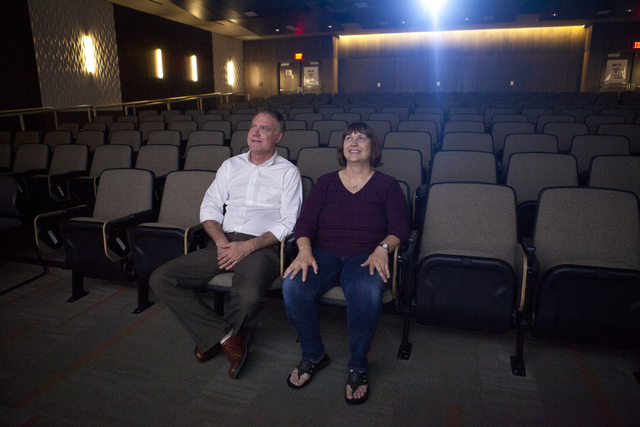 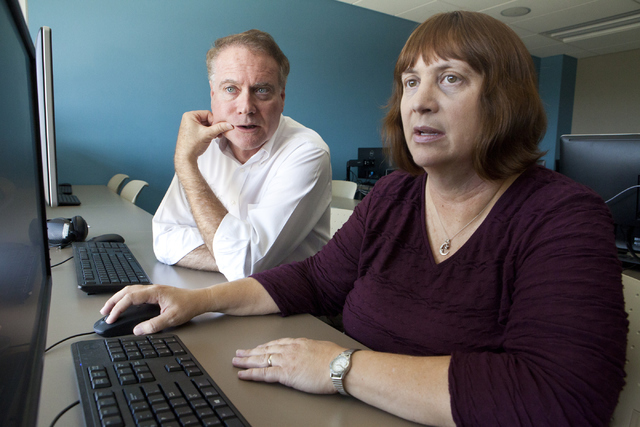 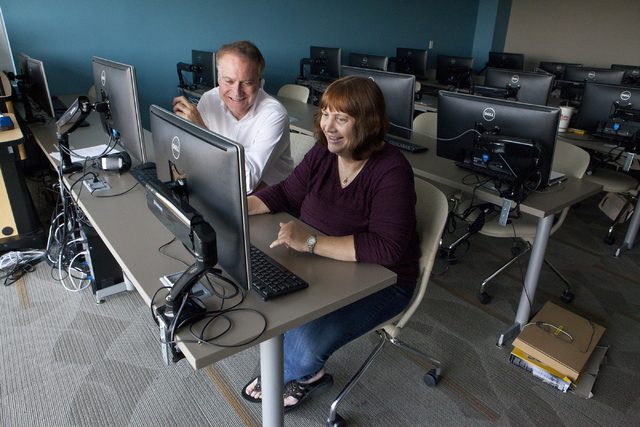 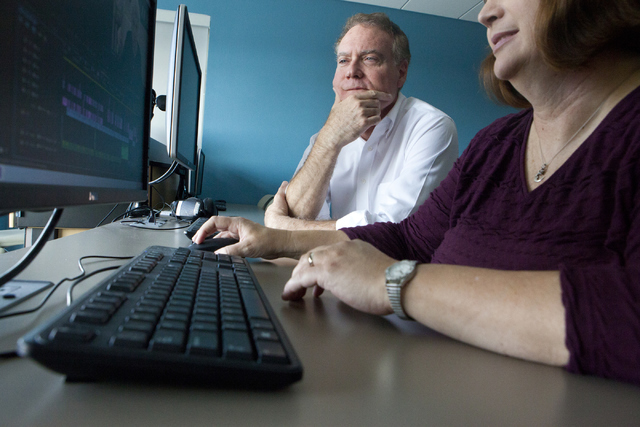 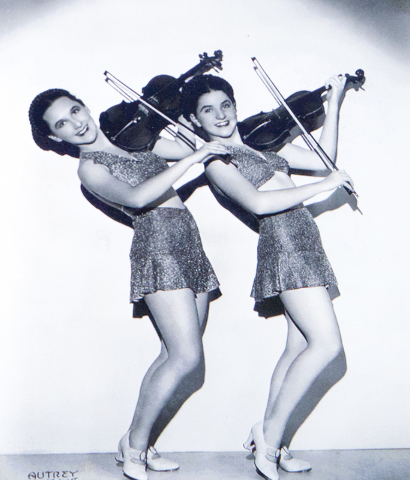 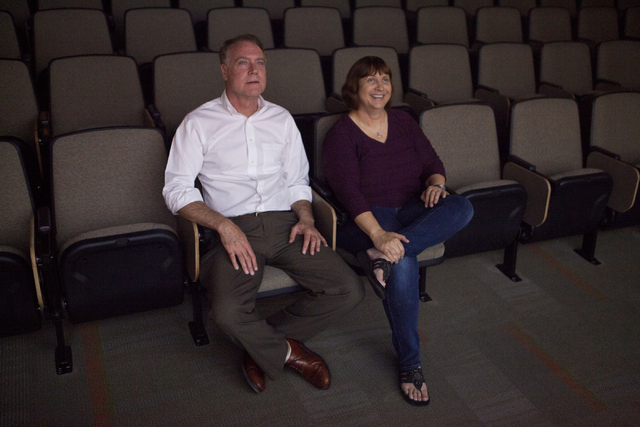 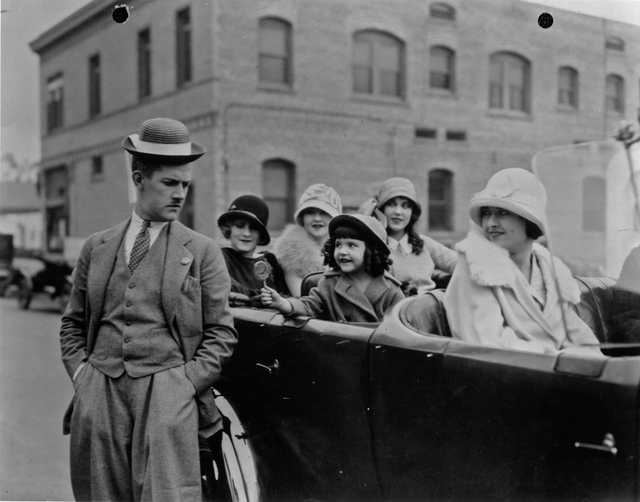 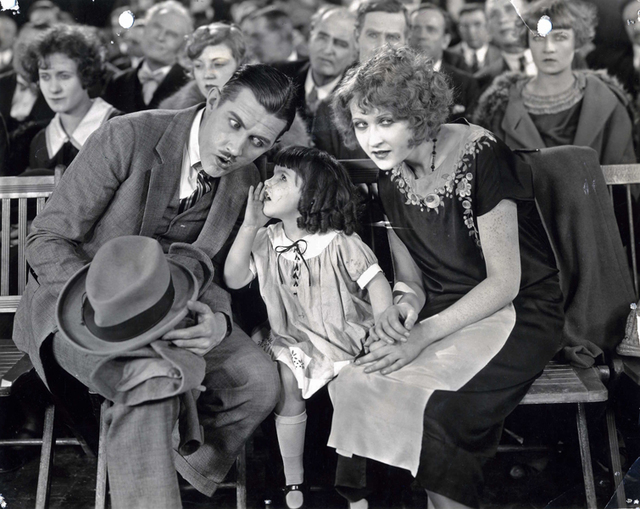 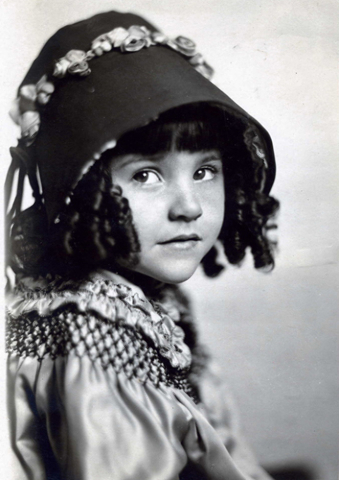 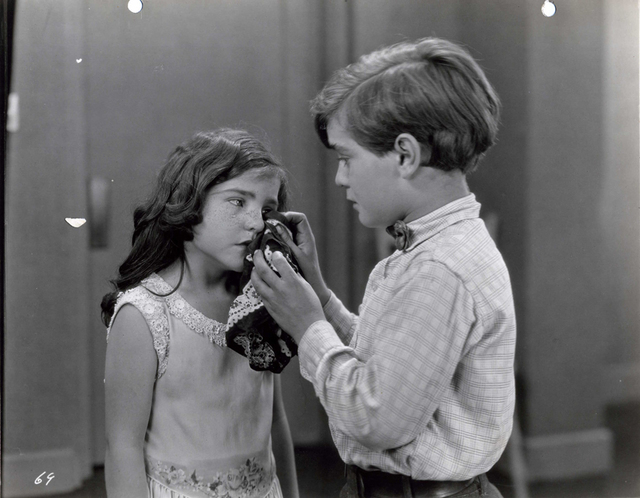 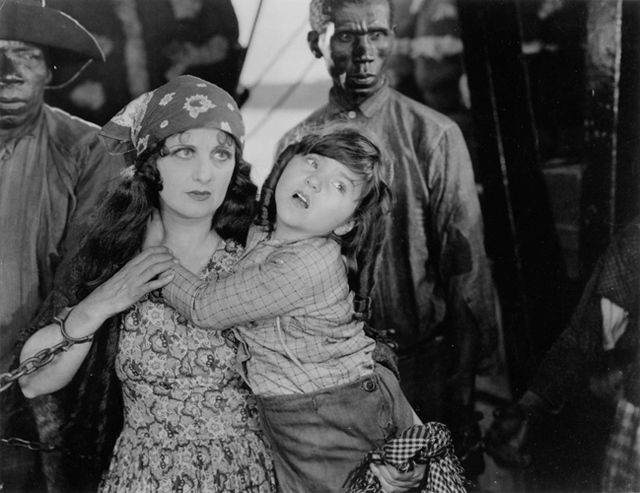 Lassie Lou Ahern, right, plays Little Harry in the 1927 epic "Uncle Tom's Cabin," her favorite of the many silents she made. (Courtesy Jeffrey Crouse) 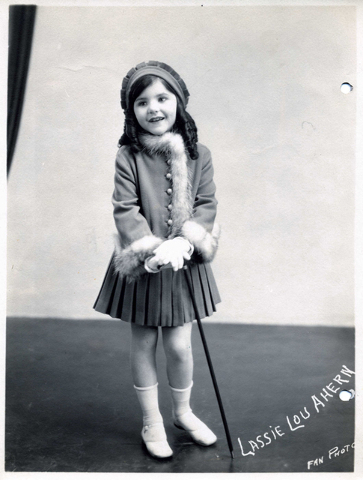 As one of the stars of the movie, she remembers filming it. She has photographs of herself in action. And she still has the script.

But Lassie Lou Ahern has never seen the finished 1927 film, about two street kids and their benefactor, who try to help a blind, penniless architect. At age 96, she’s been waiting quite a while.

Yet her chance may be coming soon, thanks to a restoration effort — and crowdfunding drive — spearheaded by a Nevada State College film historian who’s determined to preserve the legacy of one of silent film’s few surviving performers.

“I tell you, that certainly goes back a long ways,” Ahern says during a telephone interview from her home in Prescott Valley, Arizona. “I can’t believe it myself.”

The only known print of “Little Mickey Grogan” is in Paris, in the acclaimed Lobster Films archive.

The fact that “Little Mickey Grogan” still exists anywhere is notable; 70 percent of all silent features made in Hollywood between 1919 and 1929 no longer exist, according to NSC’s Jeffrey Crouse.

Based at the college’s Henderson campus, Crouse has written extensively on Ahern and Diana Serra Cary, a fellow film historian who was known as Baby Peggy when she was one of the top box-office draws of the 1920s.

Ahern’s star may not have glowed quite as brightly as Baby Peggy’s, but Lassie Lou did have her own claims to fame in the day, including a children’s clothing line.

No less a luminary than comedian Will Rogers discovered Ahern when she was 18 months old, when he encountered Lassie Lou and her older sister Peggy while visiting their father’s Southern California real estate office.

Charmed by Lassie Lou’s answer-the-telephone make-believe, Rogers suggested her father take the girls to the movie studio, “ ‘because they’re using a lot of kids,’ ” Ahern recalls in an interview with Crouse filmed last year. (The interview is featured in the documentary “Lassie Lou Ahern: A Voice for the Silent Age,” to be included in “Little Mickey Grogan’s” DVD release.)

Ahern wound up appearing alongside Rogers in four comedies and joined producer Hal Roach’s “Our Gang” (better known in the talkie era as “The Little Rascals”), which prompted her fond memories of playing with Allen “Farina” Hoskins. (Another “Our Gang” member, Ernest “Sunshine Sammy” Morrison, dances alongside Lassie Lou and co-star Frankie Darro in “Mickey Grogan.”)

Ahern also appeared multiple times with comedy star Charley Chase, whom she remembers as “so wonderful to work with,” and daredevil Helen Holmes. (The latter happens to be the star of the very first movie filmed in Las Vegas, the 1914 serial “The Hazards of Helen.”)

A hair-raising scene in Holmes’ 1925 “Webs of Steel” finds little Lassie Lou, searching for her runaway puppy, wandering down a railroad track, oblivious to the approaching train — until a nick-of-time rescue by the intrepid Holmes, who manages to save the puppy, too.

“I’m amazed that my folks let me do that,” Ahern says now. “They couldn’t do that today.”

In “Uncle Tom’s Cabin,” Lassie Lou plays Little Harry, the young son of Eliza, who makes a desperate dash for freedom across a half-frozen river rather than let her son be sold to a slave trader. (In the movie, there’s some attempt to darken the skin tone of Margarita Fischer, the white actress playing Eliza, Ahern’s Little Harry receives no such treatment.)

When auditioning for the role, “I really was shaking in my boots,” because Lassie Lou — dressed in a boy’s suit — “felt kind of funny” masquerading as a young male.

But her ability to turn on the tears sealed the deal. Her secret? Remembering that “my dad will kill me if I don’t get this job,” she recalls with a chuckle. Lassie Lou spent almost two years working on the movie. (Her contract stipulated that her sister Peggy had to accompany her while on location.)

During those two years, Ahern also remembers being loaned out to another production on the Universal Pictures lot: “Surrender,” set in a European Jewish ghetto invaded by Cossacks from czarist Russia.

“ ‘You’re not Jewish, are you?’ ” the assistant director for “Surrender” asked Lassie Lou, prompting a moment of crisis for a young actress who knew the answer to every on-set question — whether it dealt with riding a horse or flying to the moon — was always a resounding affirmative.

Ahern discovered from her mother, decades after her silent career, that she’d almost had the chance to work with the legendary Walt Disney, who had “a very sweet smile — and talk about nice.”

Reporting for an audition with Disney, he informed them that he had changed his mind about the character Lassie Lou was supposed to play — and had decided to make it a mouse.

Lassie Lou’s only audition failure occurred when, during a kitchen scene, she was supposed to smear her face with blackberry jam. Instead, she refused and started crying, at which point her mother advised the casting people to find someone else, because her daughter was usually game for anything.

“ ‘I can’t put my hands in that,’ ” Ahern remembers saying, re-creating her crying jag. “Laurence Olivier wouldn’t do that scene.”

Otherwise, “I enjoyed it every minute, I really did,” Ahern says of her career in silents. “I knew I was lucky. I realized it was something, that everyone wasn’t doing it.”

In between movies, Ahern and her sister took dance and acrobatic lessons, so “when we worked on a movie, we didn’t have to practice so much,” she says. “The other kids in dance class were our friends. We weren’t being deprived of anything. It came in handy for us, studying all these things.”

Ahern’s dance talents get a workout in “Little Mickey Grogan,” a clip featured in “A Voice for the Silent Age” shows her dancing the Charleston and walking on her hands.

“We had a lot of fun on this one,” Ahern recalls. “The prop guys made us stilts” so she and Darro could walk around. “I loved doing the picture.”

But “Little Mickey Grogan” proved to be Lassie Lou’s last on-screen hurrah for some time.

Movie buffs know 1927 as the year of “The Jazz Singer,” the first movie to feature synchronized sound. So-called “talkies” became a cinematic sensation — and so did the gangster movies that featured the sound of flying bullets.

Ahern’s “very religious” parents “didn’t like us working in that atmosphere,” she tells Crouse in the documentary interview.

As a result, Lassie Lou and Peggy Ahern concentrated on their dancing — not only performing but running a dance studio.

Eventually, Peggy got married, had kids and retired from showbiz. (She died a few years ago, at 95, her sister notes.)

Lassie Lou also grew up and had a family of her own, but “I figured, ‘Once an actress, always an actress,’ ” she says of her decision to return to performing in ’40s musicals with Donald O’Connor and Peggy Ryan. (Ryan spent her later years in Las Vegas, teaching tap and dancing until her death in 2004.)

She moved from the big to the small screen in the 1970s, scoring supporting roles on such TV shows as “Love, American Style,” “The Odd Couple” and “Petrocelli,” where she “played the mail lady” and star Barry Newman “would tease me.”

That series filmed in Arizona, which became Ahern’s home about a decade ago, when she decided to move to Prescott Valley to be with one of her sons.

“It was the first time I had to think about my age,” she says of the “big, big decision” to leave her native Southern California. “I never thought about my age, because that’s when you get old.”

It was about two years ago that Ahern “noticed I was getting a little old,” she admits. But “I still dance pretty good.”

And “before I go to tap heaven,” Ahern says, “I would like to see ‘Little Mickey Grogan.’ ”

Naturally, Ahern “couldn’t afford to do all this restoring” herself — which is where Crouse, the documentary and the crowdfunding campaign come in.

Those involved in the quest to restore “Little Mickey Grogan” hope for a 2018 debut screening at “the big silent film festival” in Pordenone, Italy, according to Crouse. And because Lobster Films has its own distribution company for titles they restore, he’s also hoping they’ll distribute it.

Even without a restored version of her only starring movie, however, Ahern knows fans haven’t forgotten her.

“Last week I got three letters from Russia,” she notes. And despite one correspondent’s “kind of broken English,” Ahern got the message: “ ‘I love you so,’ ‘you are so cute, so beautiful,’ ” she says in a mock Russian accent.

Another lift: a note from a former dance student, who praised Ahern’s message to “carry through and be the best person, whatever job you’re doing,” reassuring Ahern that “ ‘I will never forget you.’ ”

Looking back, “it’s amazing, it really is,” Ahern says of her adventures in life. “I think I’ve just about done everything.”

Fortunately for her many admirers around the world, she remembers just about everything, too.

Clearly, she’s not the only one.