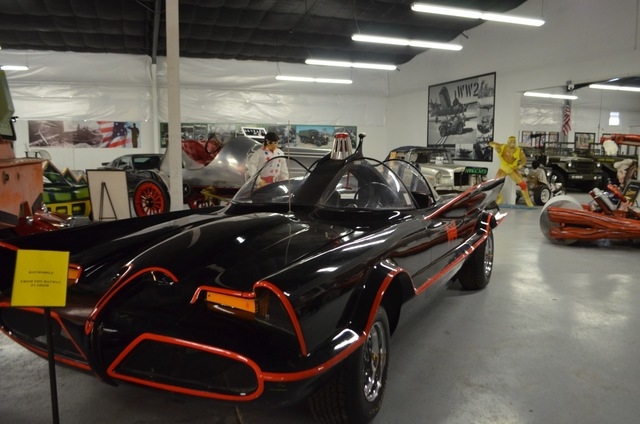 One of 18 Batmobiles made for “Batman Returns” can be found at the Hollywood Car Museum in Hot Rod City, 5115 Dean Martin Drive. (Ginger Meurer/View) (Click for more photos and scroll below story for a video) 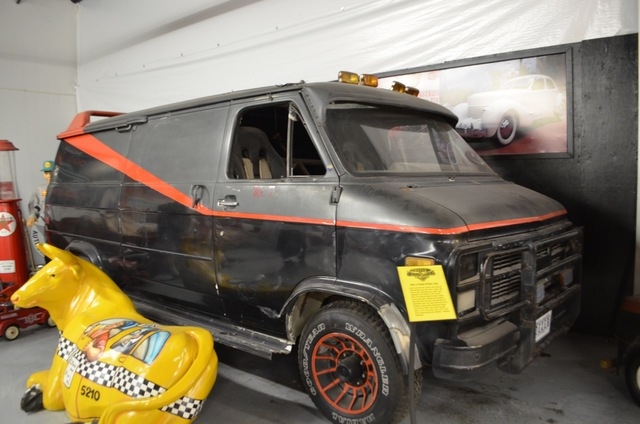 “I pity the fool that left a big gold chain necklace inside… finders keepers!” reads the museum plaque on the "The A-Team" stunt van at the Hollywood Car Museum. (Ginger Meurer/View) 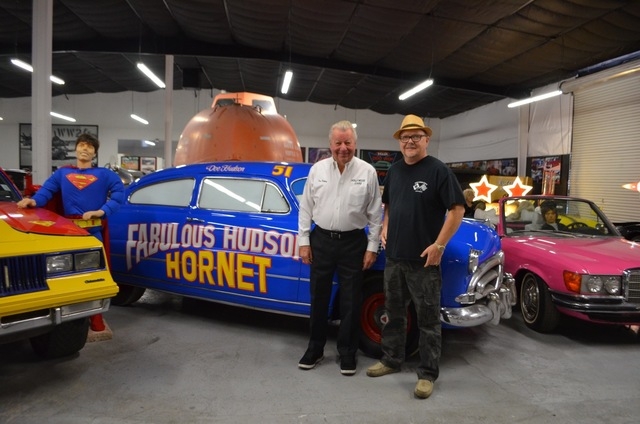 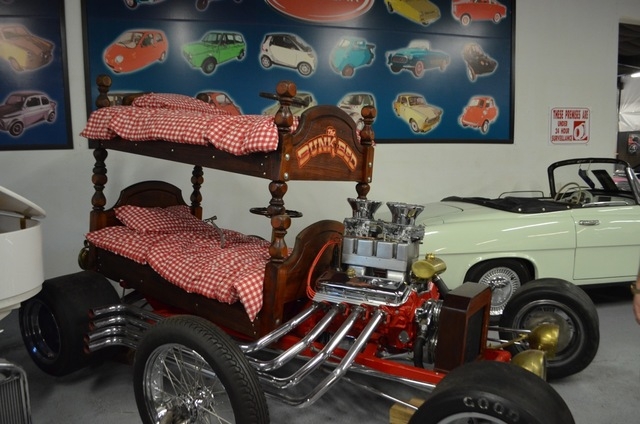 A bunk bed car is among Jay Ohrberg's original concept cars on display at the Hollywood Car Museum. (Ginger Meurer/View) 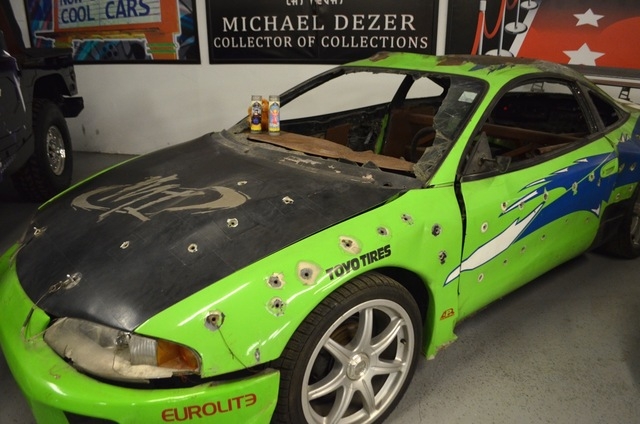 “The Fast and the Furious” stunt cars on display at the Hollywood Car Museum include a racer driven by Paul Walker. “When he got killed, a lot of people came over here and brought candles, Teddy bears and signs,” museum representative Steve Levesque said. (Ginger Meurer/View) 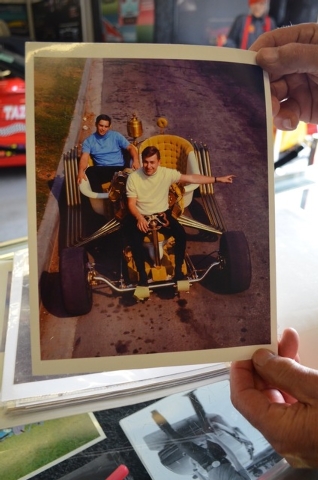 Jay Ohrberg, 75, holds a photo of himself at age 21 in the driver’s seat of his first concept car, featuring a toilet in the center and two bathtubs for passengers. (Ginger Meurer/View) 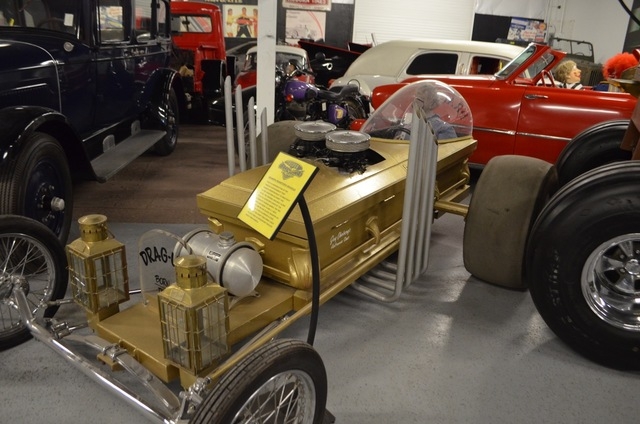 Jay Ohrberg's remake of Grandpa Munster’s Drag-u-la coffin dragster, as seen in the 1960s TV series "The Munsters," features a real coffin as a base topped by lanterns for headlights. The original was built by George Barris, and the remake is on display at the Hollywood Car Museum. (Ginger Meurer/View) 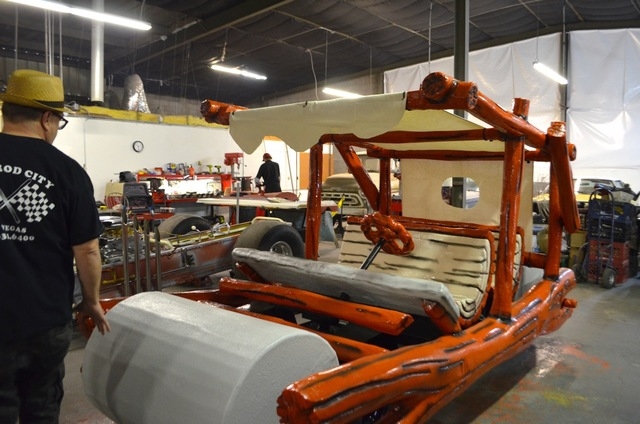 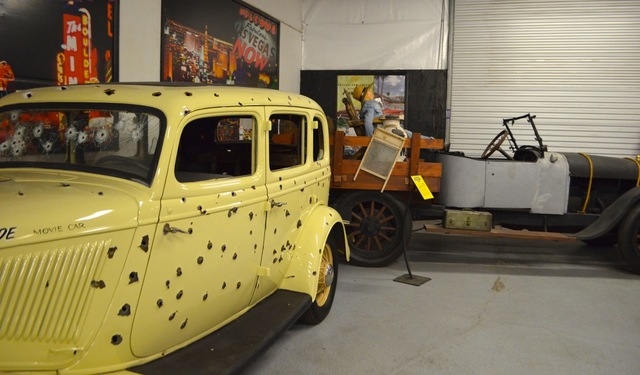 Jay Ohrberg’s version of the Bonnie and Clyde death car sits beside his reproduction of the Clampett’s truck from “The Beverly Hillbillies." (Ginger Meurer/View)

Hot rod enthusiasts looking for a car getaway can find one near home at the Hollywood Car Museum at Hot Rod City, 5115 Dean Martin Drive.

The attraction features more than 100 vehicles, ranging from original Batmobiles and James Bond cars to quirky cartoon and concept cars, but the real star is business partner Jay Ohrberg.

Ohrberg, 75, is a Hollywood legend responsible for hundreds of cars seen in films, television shows, commercials, magazines and theme parks. He started his car career racing dragsters at 18 in Illinois, where he had a speed shop. A promoter came to town and enlisted his help putting on a show. He invited Ohrberg to bring a dragster to Kansas City, Mo.

After he moved to California, the same promoter got him to haul the world’s fastest jet car to shows.

“Then I started building cars, and it went on from there,” Ohrberg said.

His first concept car, a bathtub contraption with a toilet in the center and a tub on each side, was such a big hit it was featured on “The Tonight Show” with Johnny Carson at the helm and Ohrberg and Ed McMahon in the bathtubs.

Steve Levesque, who bills himself as the mayor of Hot Rod City, remembers the car.

“I built a lot of these as models when I was a kid in the ’60s and never knew that it was Jay Ohrberg, and now I’m working with him.”

Ohrberg was brought on board by Hollywood Car Museum founder Michael Dezer. Levesque said Dezer bought the Hot Rod City land with the intention of developing high-rise condominiums, much like the developments that made him a fortune in Florida. But when the bottom fell out of the real estate market, Dezer decided to dedicate the property to his passion: cars. Most of the complex is packed with automotive-related tradesmen: mechanics, painters, automotive fabricators and more.

“It was an industrial complex that was going to be torn down,” Levesque said. “(Dezer) revitalized it into something fun that was all about our hobbies and passions.”

About three years ago, the museum concept was launched. Ohrberg has been on the project for about six months. In December, he moved to Las Vegas to work on the museum full-time.

“I’ve always wanted a museum but could never seem to put one together, so it’s a great opportunity for me,” Ohrberg said. “I’m all excited about it. And it’s a great town to do it in. You have 40 million visitors, and all we want is a few of them.”

Exhibits at the museum include a host of original Hollywood vehicles, built by Ohrberg and others, and reproductions, built primarily by Ohrberg.

Visitors can see one of the 18 Batmobiles Ohrberg made for “Batman Returns.” They can also check out cars constructed for television shows such as “Knight Rider,” “The Dukes of Hazzard” and “The A-Team.”

Bond fans will find a Land Rover Defender from “Skyfall,” a BD-5 Microjet like the one used in “Octopussy” and a 1985 Renault Taxi used in “A View to a Kill.”

The Lotus Esprit submarine car driven by Roger Moore in 1977’s “The Spy Who Loved Me” was one of six used in the film. Levesque said only three are still known to exist. The one on display in the museum was found in a junkyard in the Bahamas and restored by Las Vegan Rick Dale for his television program “American Restoration.”

Film fans can also see the lifeboat from the Tom Hanks film “Captain Phillips,” a Russian military truck driven by Harrison Ford as Indiana Jones, a toothy green alligator car from “Death Race 2000,” a snowmobile from “G.I. Joe: The Rise of Cobra” and a 1947 DeSoto taxi from “The Curious Case of Benjamin Button.”

“The Fast and the Furious” stunt cars include a racer driven by Paul Walker.

“When he got killed, a lot of people came over here and brought candles, teddy bears and signs,” Levesque said.

Ohrberg’s reproduction of the Clampetts’ truck from “The Beverly Hillbillies” sits alongside his version of the Bonnie and Clyde death car.

While some reproductions aren’t discernibly tributes, others, such as Doc Hudson from “Cars,” are.

“Obviously, this isn’t the original from the movie, because the movie was animated,” Levesque said. “But kids love this. We’re trying to get some cars in here for kids who don’t know who Batman is and some of the older TV shows, but they know who Doc Hudson is.”

Visitors can watch Ohrberg and his team of two build cars in the workshop in the back of the museum. Ohrberg is at work on tribute cars featuring Bugs Bunny and SpongeBob SquarePants. Ohrberg is hoping to make history in the workshop. He holds the world record for the longest limousine with the 100-foot-long American Dream, and he intends to top it.

“We’re going to build a new limo this year of a late-model Rolls-Royce,” he said. “It’s going to be 110 feet long. It’s going to have a lap pool in it. We’ll build that in three pieces in the back here.”

Ohrberg said to expect a helicopter landing pad and “lots of wheels, lots of motors.”

Ohrberg plans to keep building as long as he can, for “the love automobiles,” he said. “I’m a freak on cars.”

A Hot Rod City Hangout Car Show is scheduled at the museum from noon to 4:30 p.m. March 1.