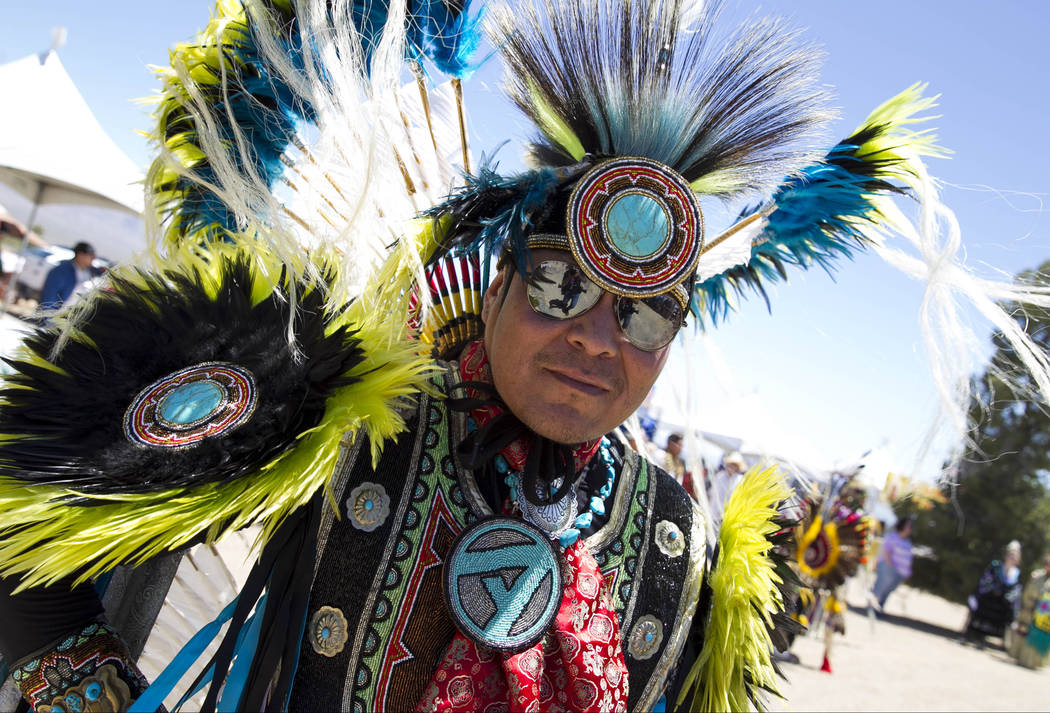 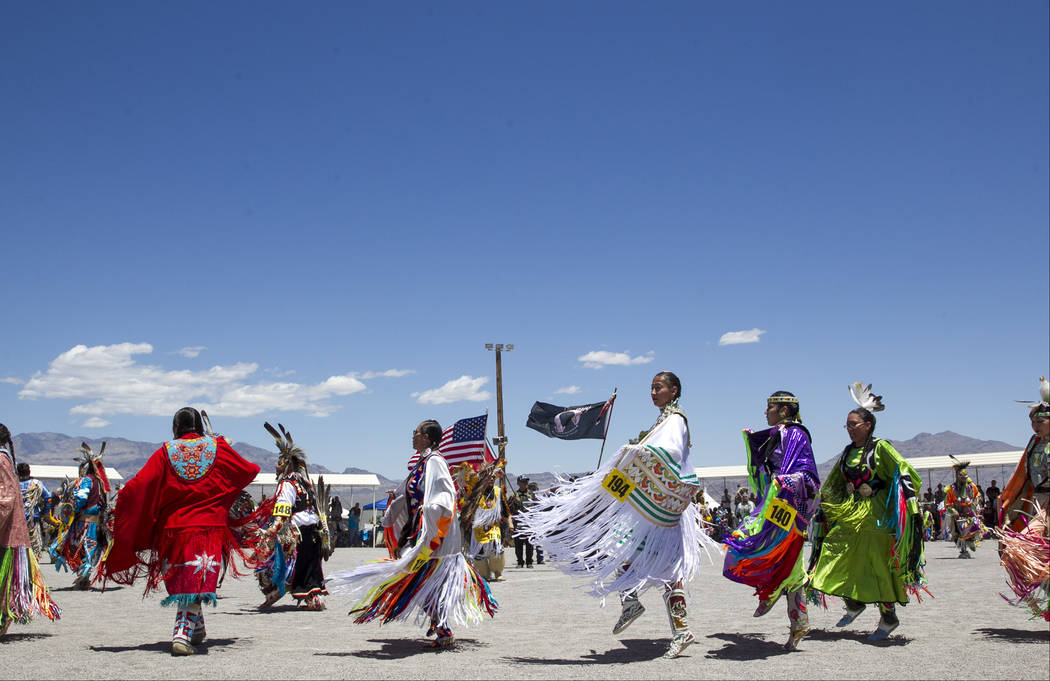 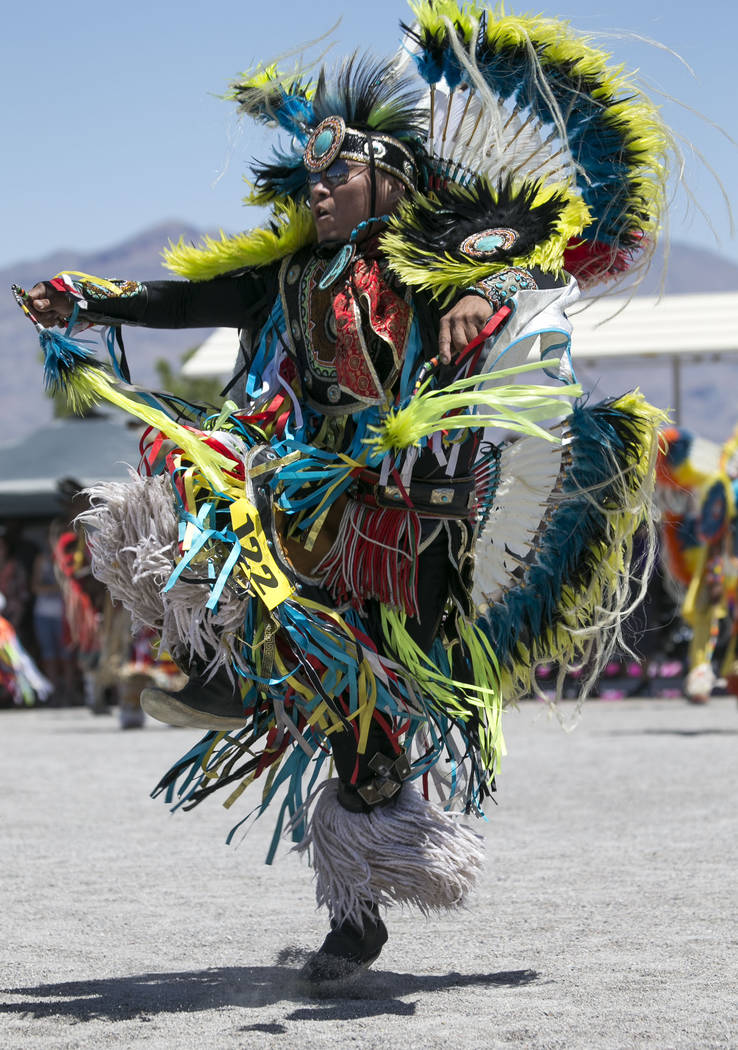 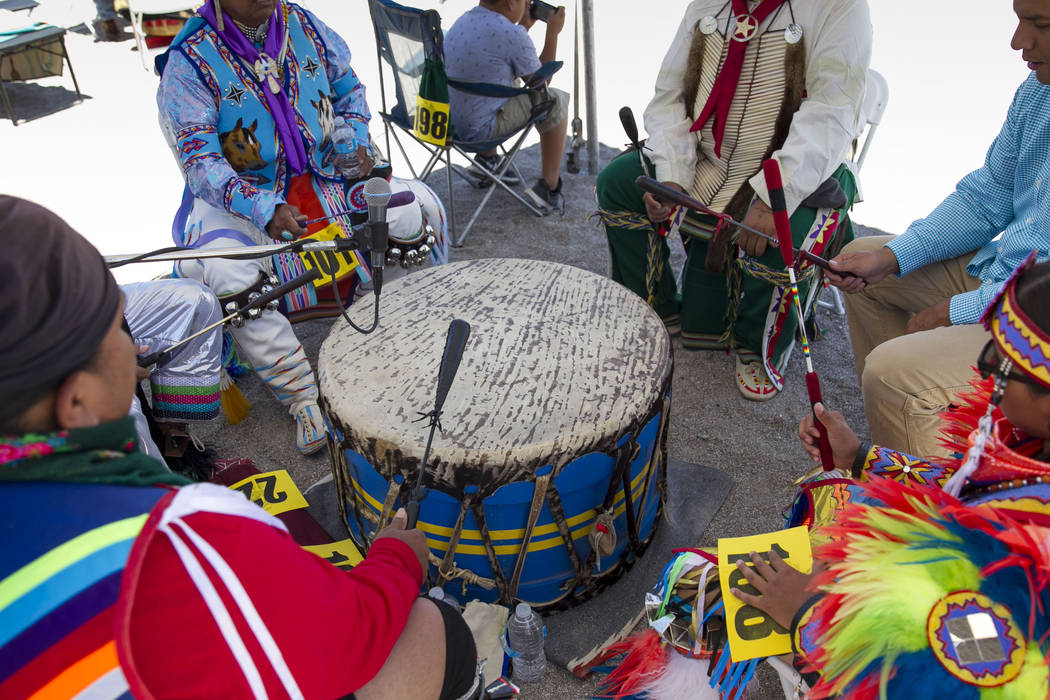 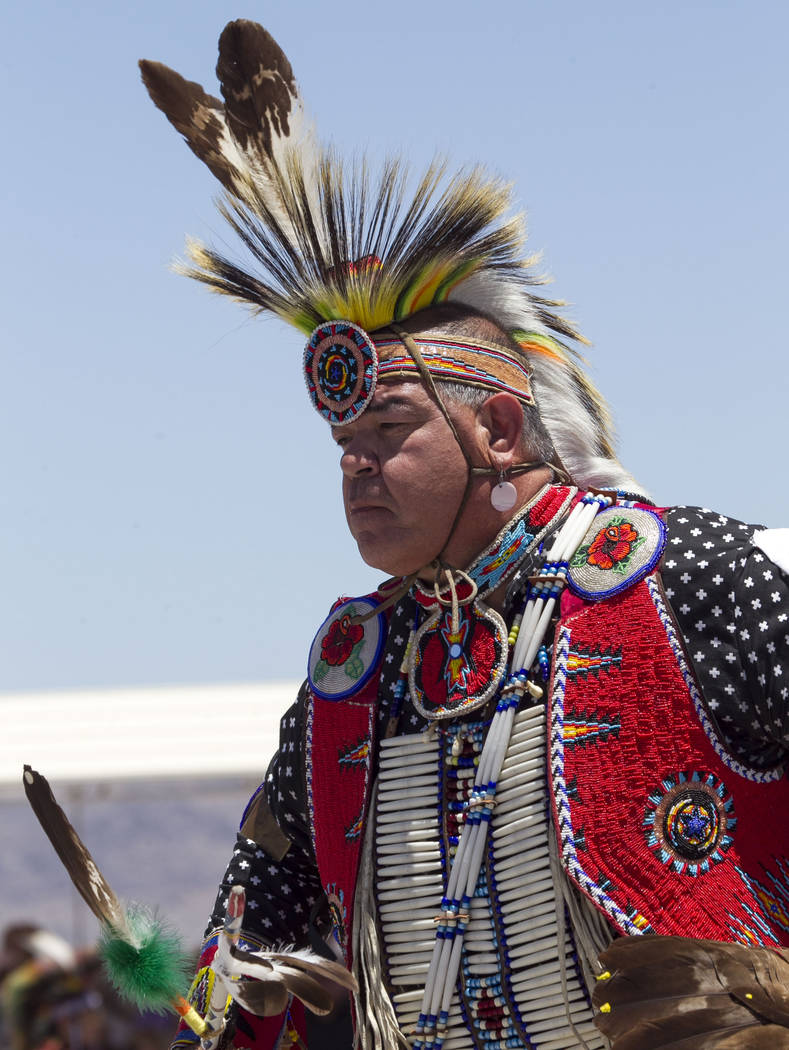 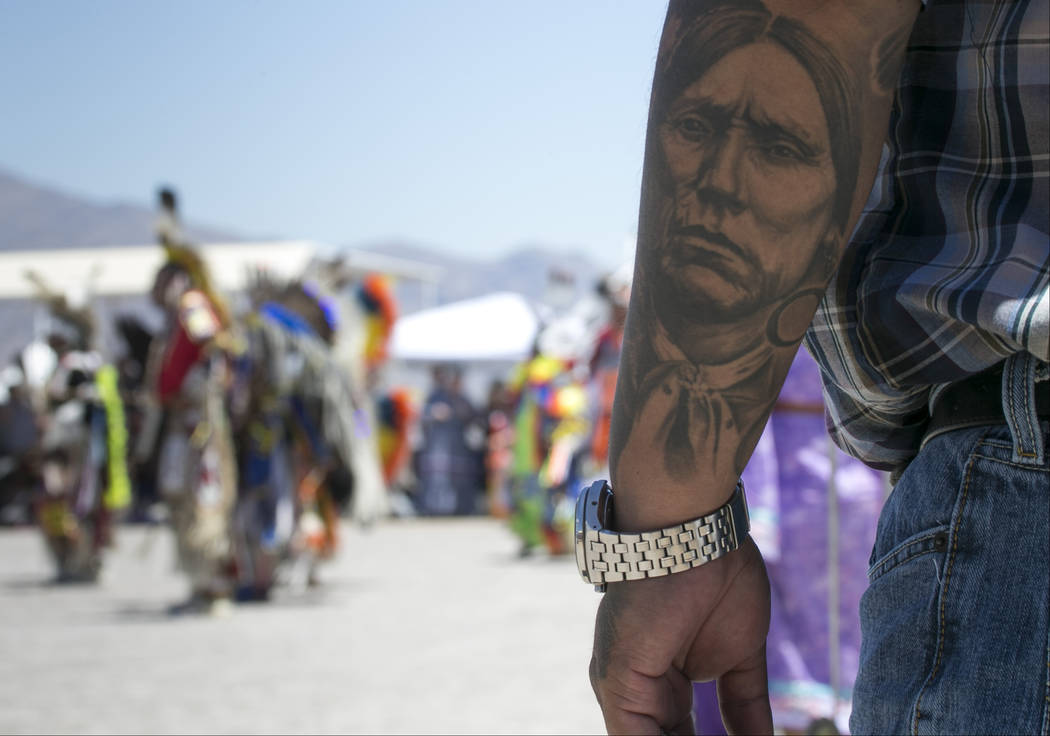 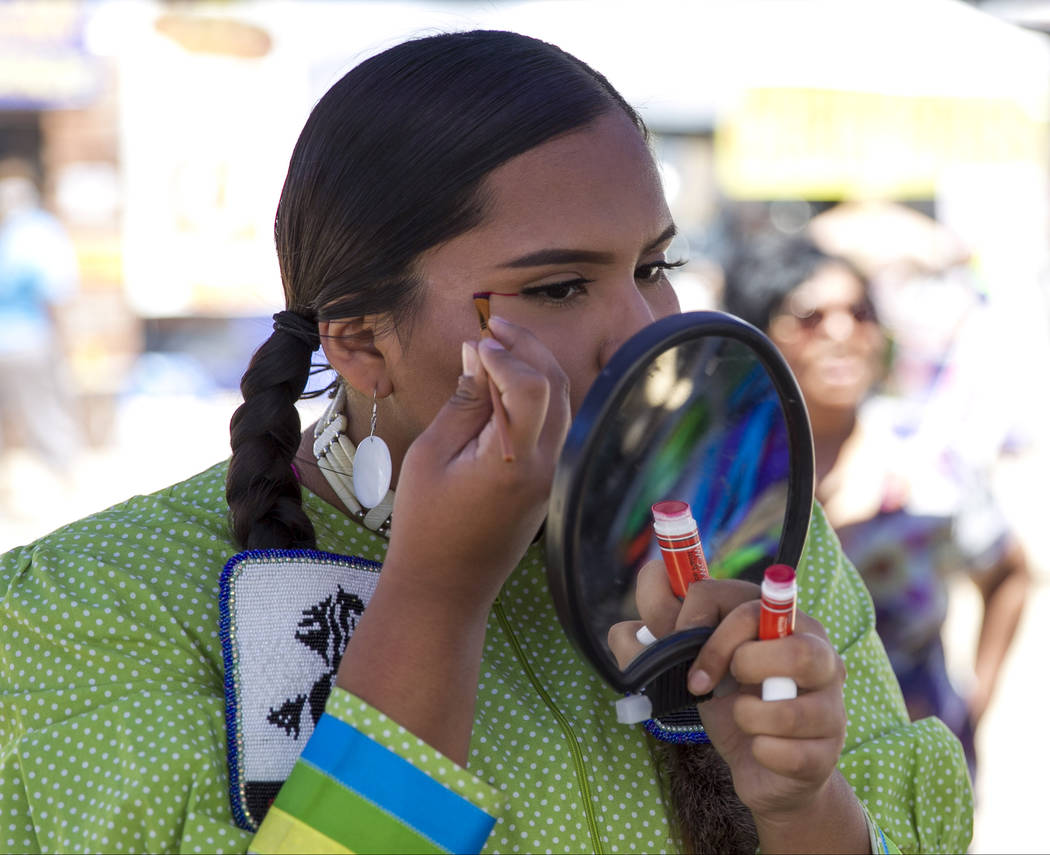 Wyomee Cooke, of Phoenix, Arizona, touches up her makeup before dancing in the grand entry ceremonies during the 28th annual Snow Mountain Pow Wow on Saturday, May 27, 2017. Richard Brian Las Vegas Review-Journal @vegasphotograph 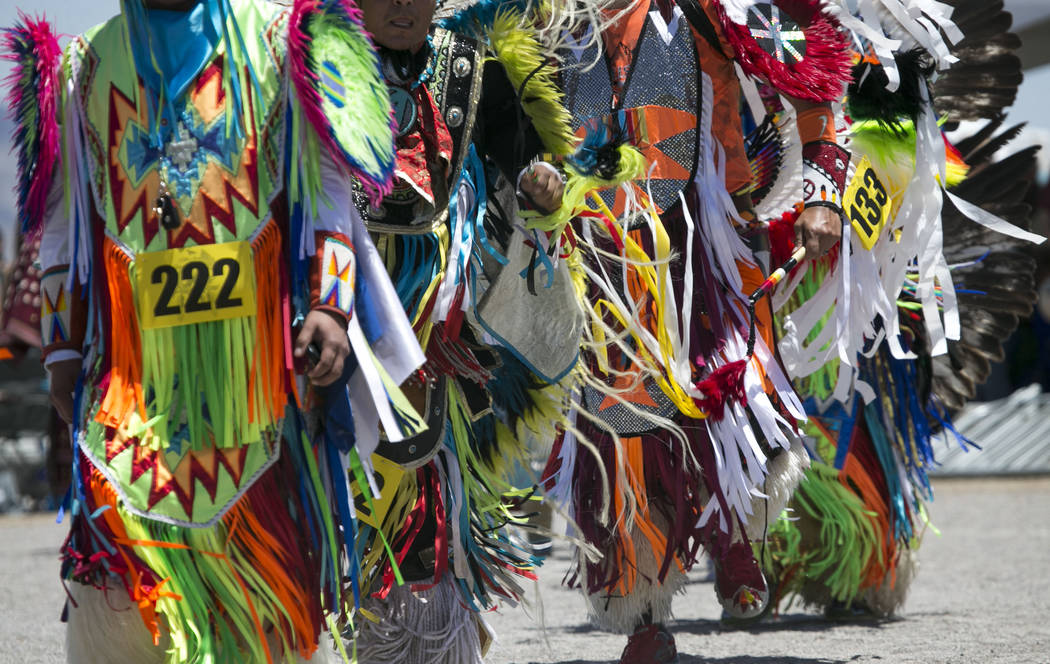 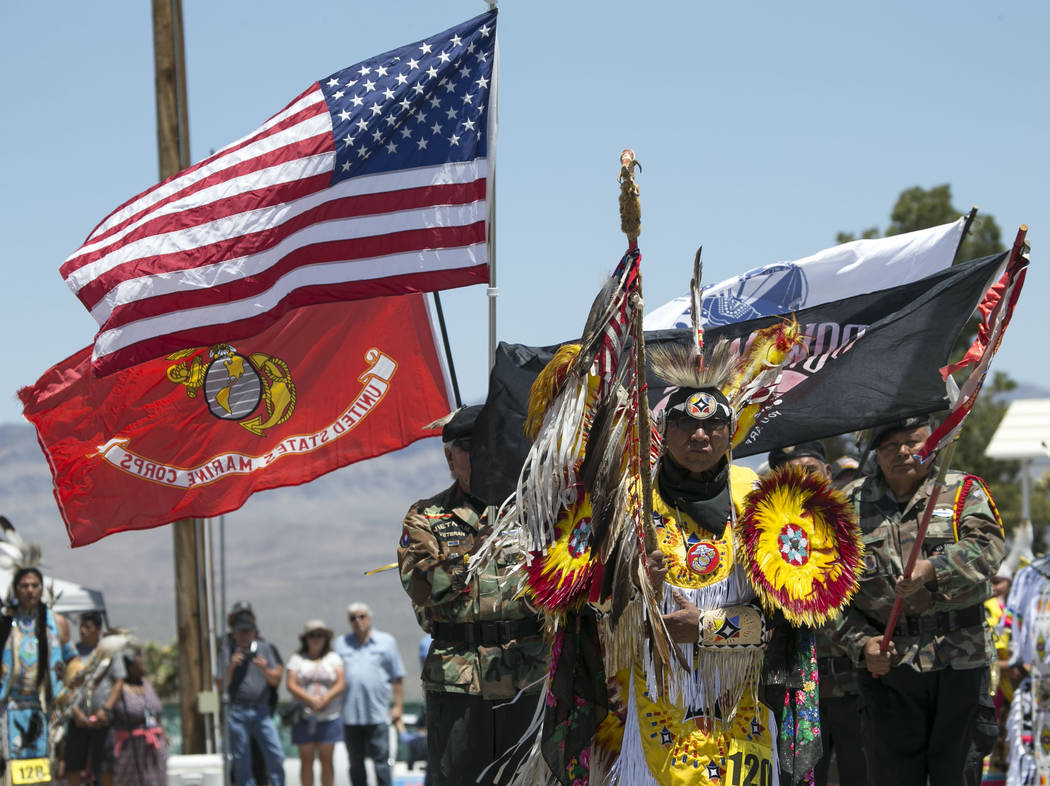 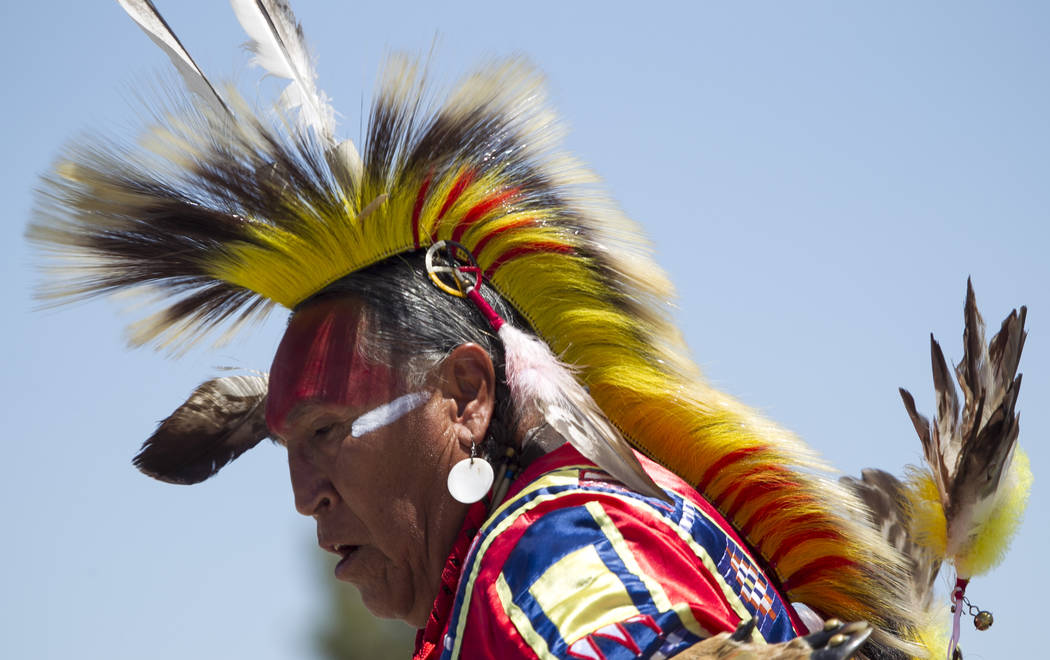 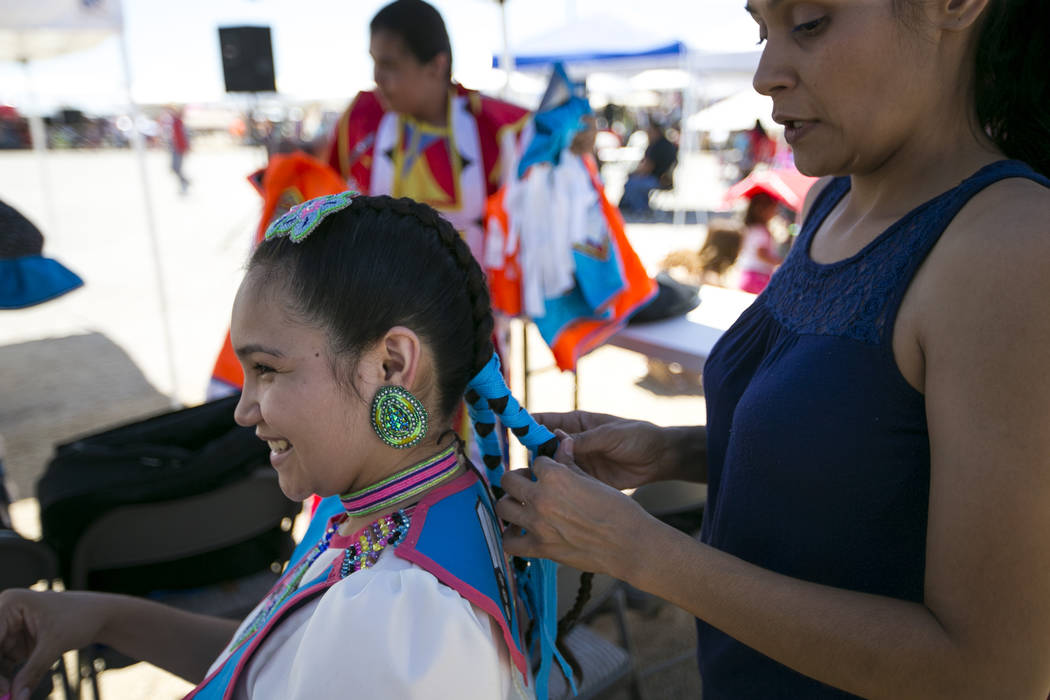 Aiyana Rubio, 15, get helps with her hair by her mother, Vanessa Rubio, before the start of the grand entry ceremonies during the 28th annual Snow Mountain Pow Wow on Saturday, May 27, 2017. Richard Brian Las Vegas Review-Journal @vegasphotograph 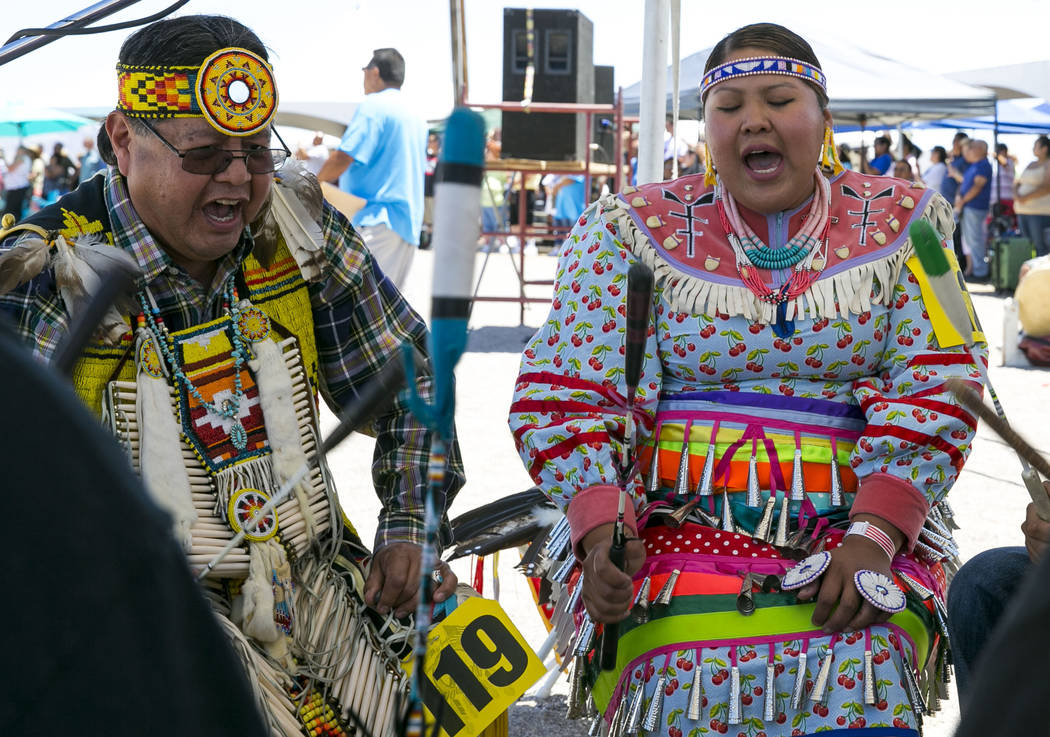 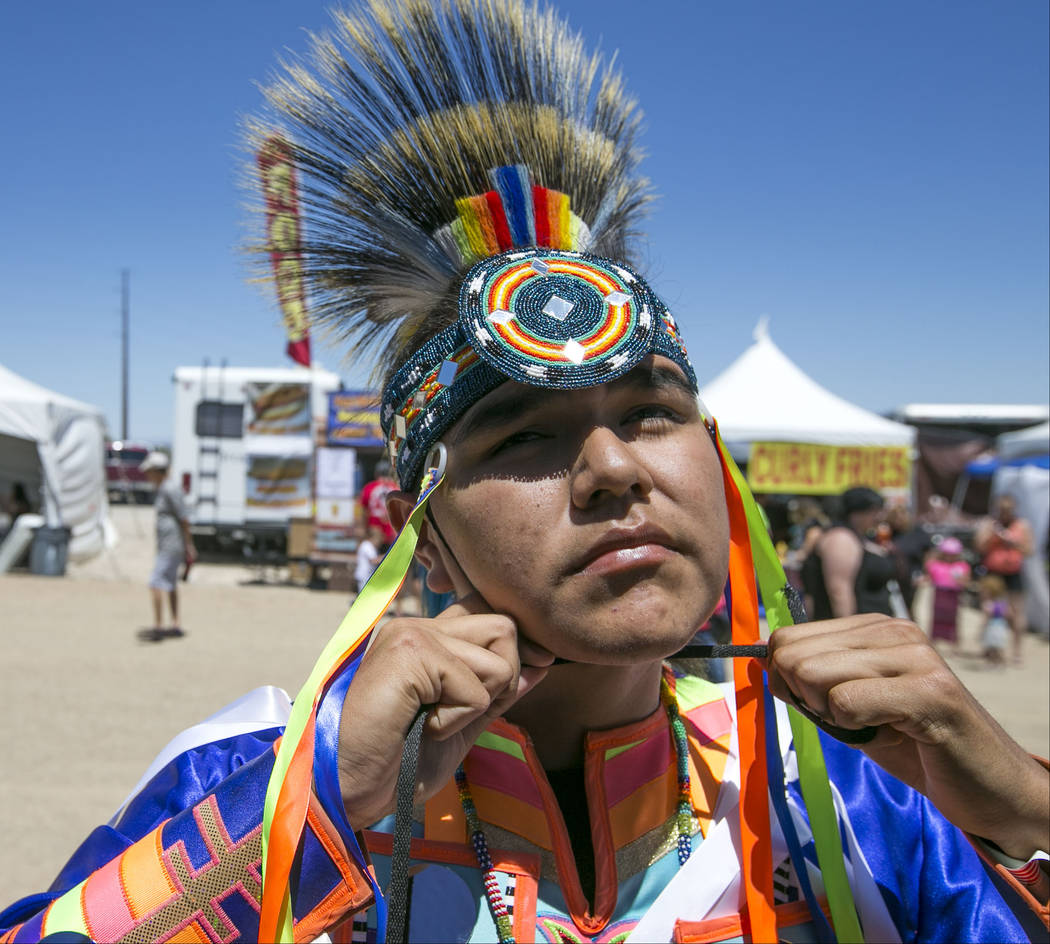 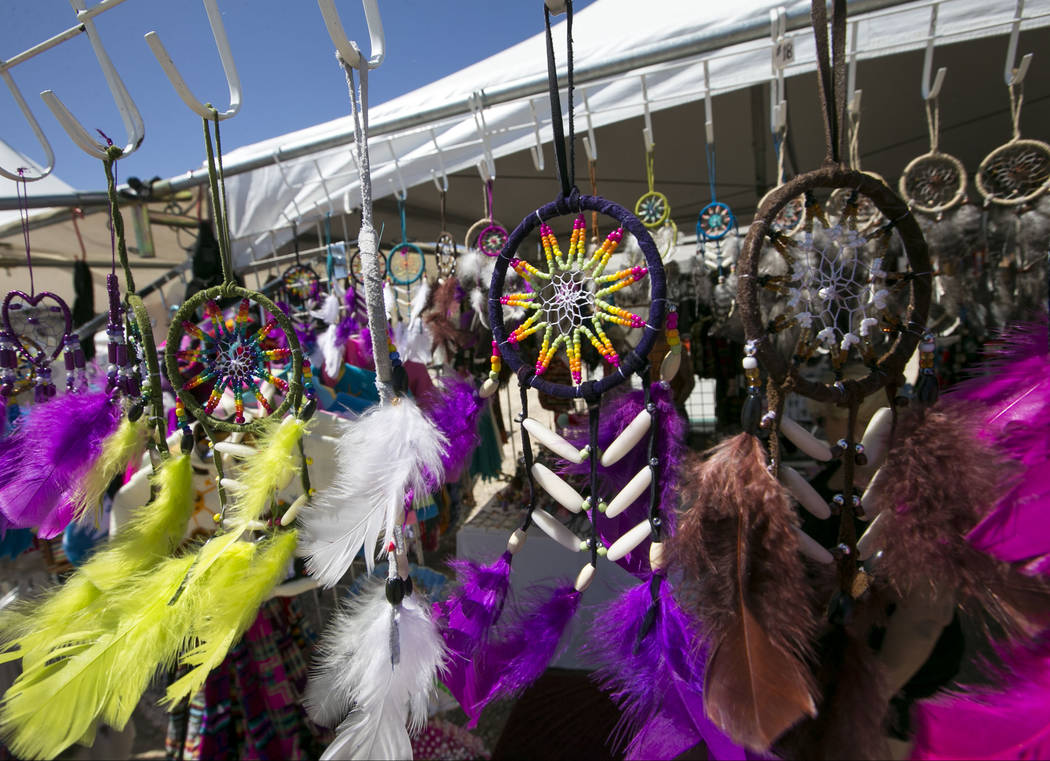 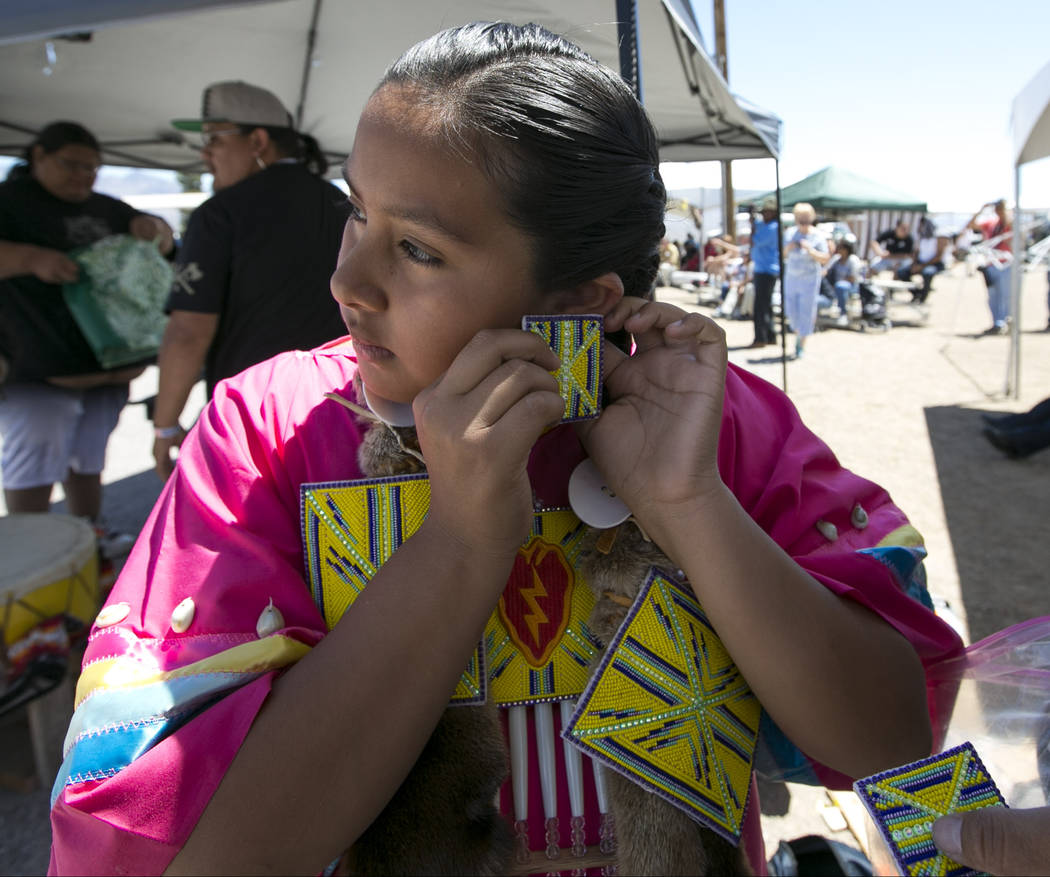 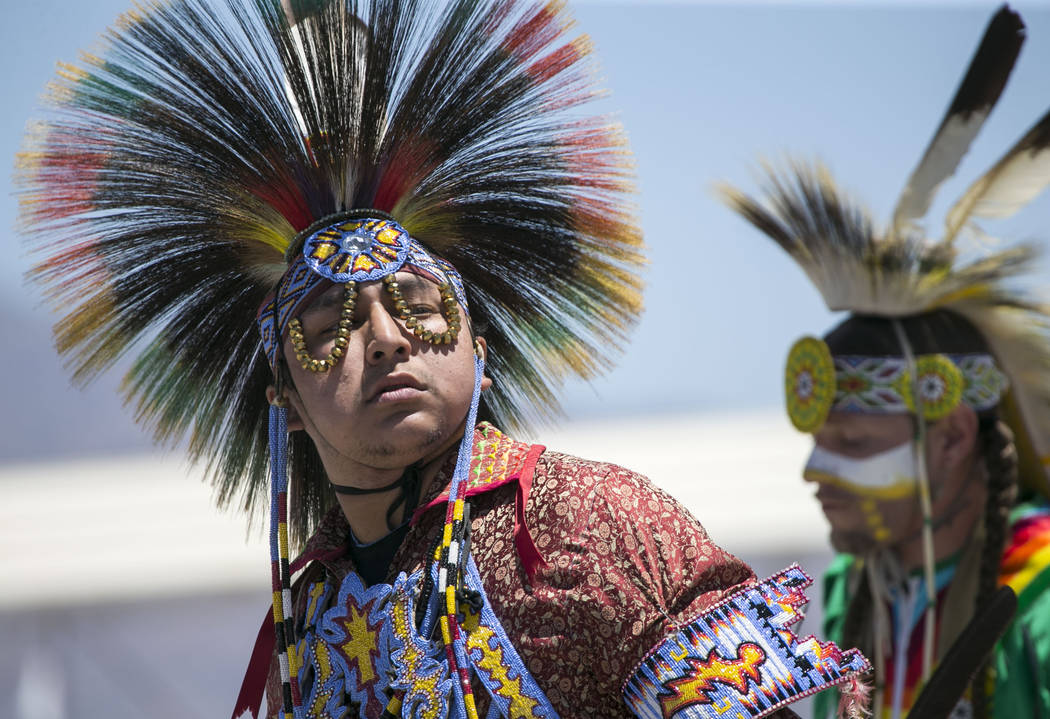 Attendees poured through the gates of the 28th annual Snow Mountain Pow Wow grounds late Saturday morning, greeted by the low, rhythmic beating of a drum and the sustained chants of four men circled around it. Each man held a mallet and struck the instrument in unison.

Rocky Stevenson, a 59-year-old man with flushed skin, white sideburns and an off-white cowboy hat, entered the sacred dance arena just after 10 a.m., shaking a tin rattle and taking a quick, bouncing step for every drumbeat. He was joining a gourd dance to chase off unwanted spirits.

Monty Williams, 57, the lead gourd dancer at Saturday’s ceremony, at exit 99 off of U.S. Highway 95 northwest of Las Vegas, said the Pow Wow aimed to pass on Native Americans’ oral history through song and dance.

“This is just a celebration of being Indian,” Williams said. “It’s a celebration of the Memorial Day weekend, honoring our loved ones that passed on, especially the veterans that have fought for our freedom, our religious rights and our Native American rights.”

“I’ve been to a lot of powwows, maybe since I was 5,” Serenity said. She likes to dance in the ceremonies “because it’s fun and it gives me exercise,” she said.

Connie Jake, said she spent two months beading Echo’s yellow crown, which featured the name of the girl’s tribe, a bighorn sheep and a blue-and-green hummingbird.

“I used to dance when I was her age,” Connie Jake said. “I didn’t find it interesting at her age, but when I became an adult and had her, I wanted her to continue on with it.”

Echo, whose great-grandfather and grandfather served in the Army in World War II and Vietnam, respectively, was crowned the Southern Paiute Veterans Association Princess. Connie Jake said she and Echo have traveled as far as Oregon so Echo could dance in powwows and in December collected blankets and hand-warmers for protesters at Standing Rock Indian Reservation in North Dakota and South Dakota.

Sen. Catherine Cortez Masto, D-Nev., was one of the hundred or so people who drove to the reservation to join the celebration.

“Southern Nevada Paiutes are an integral part of our community,” Cortez Masto said. “And as you can see, this is a day for family and friends and to recognize the strong tradition they have here.

“As someone who sits on the community affairs committee in the Senate, doing everything I can to continue to support our Native Americans across the country, including here in Nevada, is something that is important for me.”