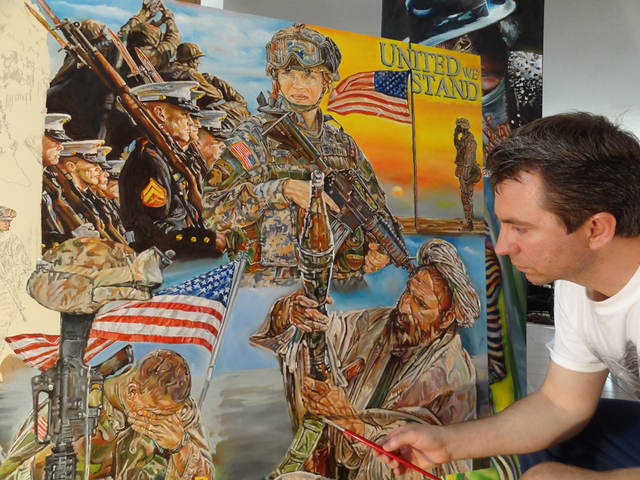 Alex Krasky, a self-taught artist, immigrated to the United States from the Crimea region of the Ukraine, and he and his wife, Debra, got a house in Summerlin. He now divides his time between Houston and Las Vegas. He recently gave 10 paintings he did of the late Michael Jackson to Jackson's brother Jermaine. (Special to View) 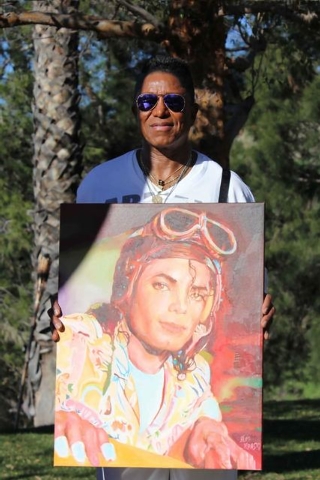 Jermaine Jackson is seen in this photo from January 2015 at his California home, holding a painting by local artist Alex Krasky. Krasky, who made Las Vegas his base, gave 10 paintings he'd done of Michael Jackson to Jermaine. (Special to View) 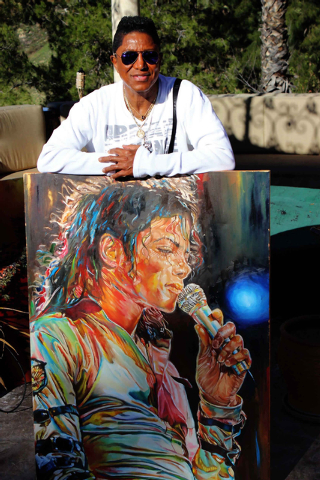 Jermaine Jackson is seen in this photo from January 2015 at his California home, holding a painting of his late brother Michael Jackson by local artist Alex Krasky. (Special to View) 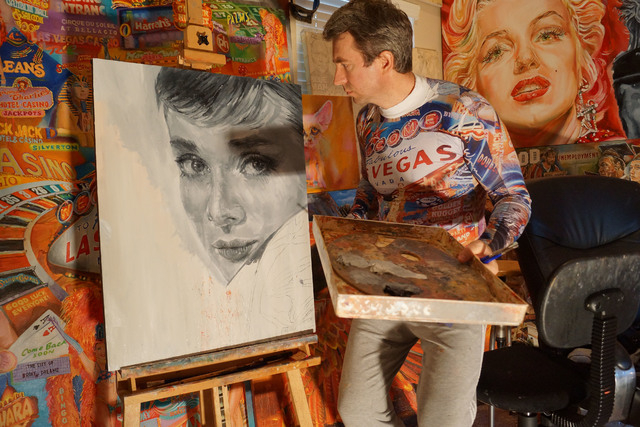 Artist ​Alex Krasky works on his latest painting in January 2015 in his studio. (Special to View)

When Michael Jackson died in 2009, Summerlin portrait artist Alex Krasky celebrated the pop singer’s life by creating paintings of him.

“He had a huge impact on me,” Krasky said. “He was an inspiring character in my life. … Everybody has an idol. For me, he was the one.”

Now, 10 of those paintings — in sizes from 18-by-24-inches to 5-by-4-feet — are in the hands of Jackson’s older brother Jermaine, who is having them framed.

Jermaine Jackson said people often approach him with drawings or paintings of Michael.

“Some are OK, and some are good,” he said. “We get all kinds … but when I saw Alex’s, I got emotional because I lived with my brother all his life, and we know each other’s moods and each other’s expressions, and Alex captured my brother … those paintings came alive. It’s probably the best work I’ve ever seen.”

A self-taught artist, Krasky immigrated to the United States from the Crimea region of Ukraine. He and his wife, Debra, made Summerlin their home. It was there that he did all the Michael Jackson paintings. They show the singer in various poses, singing on stage or smiling at the camera. Each one took months to paint. The last one was completed about two months ago.

Krasky would often put on the pop singer’s music while he painted the portraits. He said it helped him connect with the artist’s energy.

“Sometimes I talk to a painting (while working on it),” Krasky said. “Not with all of them — like, not with Marilyn Monroe; I felt no connection there — but with Michael, I did. I feel he’s not gone. It’s almost like I have his presence here.”

He recalled going to a Michael Jackson concert in Russia and being struck by how small and fragile the singer appeared to be but how strong of a personality he had. He said he’s been told that the vibrancy of that personality comes across in the paintings he gave to Jermaine Jackson.

“People always ask me, ‘How many thousands of dollars did you sell them for? How many millions?’ But I never intended to sell them,” Krasky said. “I have people contact me on Facebook, wanting to buy them. But I never thought of selling any of them. I just wanted the family to have them.”

It was a long road to get them into Jermaine Jackson’s hands. When Michael died, Krasky made the trip to Los Angeles to attend his funeral at the Staples Center and hand the pop star’s mother a small painting he’d done of her late son. Security turned him away before he even got close.

Soon after, two women in Australia commissioned Krasky to do two small pieces of Michael. The family’s estate learned of it and sent Krasky a stern cease-and-desist letter.

When Cirque du Soleil opened its tribute show “Michael Jackson One,” Krasky showed up with a portrait of Michael complete with a Cirque theme to it. Krasky didn’t want money; he just asked that it be displayed in the theater lobby at Mandalay Bay for fans to enjoy. He was told that, legally, the show could not accept it, and he was sent away. Ironically, that is one of the portraits that Jermaine Jackson now has in his private collection.

So how did Krasky connect with the Jackson family?

Enter “Gwen,” who asked that her real name not be used. She had known the Jacksons for years, and a mutual friend introduced her to Krasky last summer and took her to Krasky’s Summerlin studio. She said it was “almost eerie, how well he had captured Michael’s spirit.”

Gwen sent the pictures to people she knew, and Jermaine Jackson responded, asking to speak to Krasky. She agreed to pack the portraits in her car and took them to Jermaine’s Southern California home.

“One thing people need to understand is there’s a difference between the family and the estate,” she said. “The estate is controlled by lawyers. So, it’s the lawyers who said, ‘We own Michael’s likeness. You can’t do this.’ The family has never seen those letters. They know nothing about them.”

Krasky, who now divides his time between Houston and Las Vegas, said he was glad the paintings were finally where they belonged.

Jermaine Jackson said he would make sure Krasky’s work “gets out there because he’s very talented,” and besides including them at private events, he plans to hang some at a new studio complex his family is planning.

“My dream came true,” Krasky said. “The fact that I didn’t get a penny out of it doesn’t change anything. I know that the paintings will not be lost in some gallery. They will be passed down (from generation to generation) and stay in the family.

“I was listening to his songs when I was kid. I never dreamt my art would get to his family. As an artist, I feel really proud.”