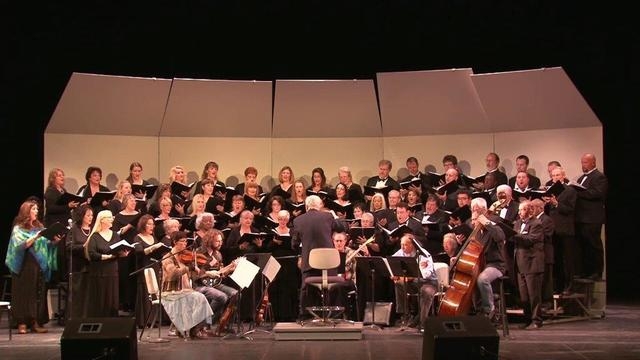 But for 34 members of the Southern Nevada Musical Arts Society, it’s no joke.

“They are so terribly excited,” Musical Arts Society music director Douglas Peterson said of the local singers, who are scheduled to travel to New York Friday alongside a 20-member Las Vegas entourage.

The Musical Arts Society singers are scheduled to rehearse this weekend to prepare for Monday’s Carnegie Hall concert, which will feature 125 to 130 singers, Peterson noted.

“It’ll probably be pretty intense,” he said of the group’s schedule.

Peterson first heard composer Carol Barnett’s “Bluegrass Mass” (which features a libretto by Marisha Chamberlain) at a Minneapolis music conference and said, “What is this?” he recalled. “A classical work combined with bluegrass? That was most unusual.”

But the unusual work, which represents “kind of fresh territory,” has “caught on,” Peterson said.

In a preface to her 2006 score, composer Barnett wrote that she hoped to “bring the solemnity of the classical-based Mass together with the down-home sparkle of bluegrass,” adding that the composition enabled her “to write cheery sacred music — all too rare in a medium rife with staid and even lugubrious settings.”

“They invited me to send a disc” of the group’s performance, Peterson explained. “We had to qualify.”

As for the New York trip’s impact, “Las Vegans going to Carnegie Hall? This is rather special,” he added, calling it “something I never expected to see during my 46 years as Southern Nevada Musical Arts Society music director.”

But it’s not the only special concert the Musical Arts Society will perform this year; in December, they’ll be backing Andrea Bocelli at the MGM Grand for the sixth time during the singer’s annual Christmas concert tour.