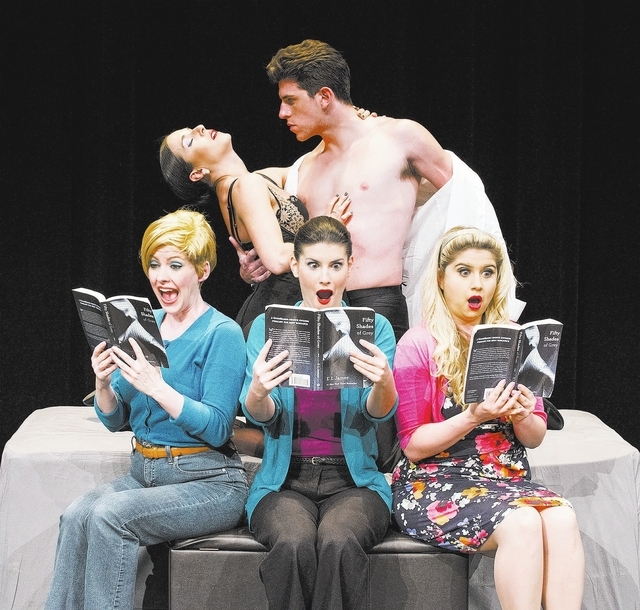 Book club members react to “50 Shades of Grey” in the unauthorized parody of the book series, “50 Shades! The Musical,” which is being performed Saturday at The Smith Center’s Reynolds Hall. (Courtesy Clifford Roles)

Ready to have your mind blown?

The inevitable “Fifty Shades of Grey” movie adaptation is slated for a 2015 premiere. But, in the meantime, fans can sate their desire for E.L. James’ story of a girl, a guy and the odd hardware store supply via “50 Shades! The Musical,” a definitely unauthorized, absolutely satirical musical spoof.

The musical will be presented at 7:30 p.m. Saturday in Reynolds Hall at The Smith Center for the Performing Arts, 361 Symphony Park Ave. No one younger than 16 will be admitted, and minors 16 and older must be accompanied by an adult. Tickets range in price from $24 to $79 (www.thesmithcenter.com or 702-749-2000).

The musical is not an authorized adaptation of the novels but, rather, a musical parody created in large part by members of Baby Wants Candy, a Chicago-based improv troupe — Rachel Dratch, Seth Meyers and current “Saturday Night Live” cast member Aidy Bryant are alums — whose specialty is creating improvised musicals onstage each night based only upon a title offered by an audience member.

Al Samuels, a founding member of Baby Wants Candy and director and head writer of “50 Shades! The Musical,” concedes during a recent phone interview that beginning each performance of “50 Shades!’ with an actual script and an actual score in hand is a departure from the way he has spent much of his career. “50 Shades! The Musical” was born when a producer familiar with the group’s work suggested that Baby Wants Candy do an improvised version of “Fifty Shades of Grey.”

Actually, Samuels adds, the producer’s idea came after “reading an article about how hardware stores are running out of rope” because people all over the world were trying to duplicate the sexual feats described in the book with the authentic equipment.

“He was like, ‘I was originally going to buy a rope factory,’ which is such a hilariously dumb idea,” Samuels says, laughing.

Anyway, that — the improv thing, not the rope factory thing — “was kind of the genesis of it,” Samuels says, with members of the troupe opting to give the book “Fifty Shades of Grey” a musical, rather than an improvisational, treatment.

The musical earned a four-star review at the Edinburgh Fringe Festival in 2012. “Then it kind of grew ever since, and it’s been a really exciting ride,” Samuels says.

In addition to the touring company that will visit The Smith Center, the show also is running off-Broadway. But how do you parody a book that — not to sound mean or anything — already reads like a parody?

Samuels laughs. One way is to be “supercheesy and make fun of it,” he says. The other — the one the show’s creators chose — is to poke fun not just at the story, but at the hoopla surrounding it.

“We benefit very much, because the book — I want to be very kind to them — some parts are not as well-written as you might expect,” Samuels says with a laugh.

The musical uses the framing device of a women’s book club to poke fun at the “Fifty Shades” phenomenon, then incorporates satirical scenes based on the book. Eileen Patterson,who plays the Anastasia Steele role, notes that the book club scenes offer women in the audience the chance to “laugh at themselves and at the book club ladies’ reactions.

The goal, Samuels says, “was to tease out, of course, the ridiculous parts. Those are, obviously, fun. But I think in good parody there’s also a kind of love and an affection for the source material.”

With “for lack of a better word, love of your material, you understand what makes it exciting to people and why some people are attracted to it, and that makes it much better. Otherwise, you’re just taking cheap shots.”

Samuels notes, maybe at least half-jokingly, that “Fifty Shades of Grey” is “a love story at its core, in a weird way. It’s kind of a twisted ‘West Side Story’ and that, at its core, is a great thing to start with.

“It’s a very simple love story. Girl meets boy, boy is effed-up in a way, girl is kind of a little effed-up, and are they going to be able to get together.”

He laughs. “So it’s supersimple.”

Patterson has been with the show for about eight months. She has spent most of her career in musical theater, and her credits happen to include work with Disney Cruise Lines.

Speaking of which: Patterson notes that “what’s fun is that Anastasia is a little play on the Disney princess/ingenue, the young, innocent girl-type character, and I get to have a little bit of fun parodying that as well.”

Patterson has read all three books in the series, the first time “when they came out a few years ago. “

“Everybody was reading it, women were talking about it,” she says. “And I read them. and they were not quite the best literature around, but it’s entertaining for what it is. This is why they’re so popular, of course. And then, when I was booked for the show, I read them again.

“For research,” she adds.

In preparing for the role, Patterson says she treated the part just as she would any other role. Her goal was to make sure “that I’m presenting a character that’s a real character, a real girl going through a real dilemma, then adding parody stuff on top of it.”

That last part turned out to be easy.

“This show is written funny enough that if I just say the lines, there’s not anything else that I need,” Patterson says.

Taking on a comedic role is “something that’s really new for me,” she adds. “I always knew I wanted to do some comedy and I knew I could be good at it, but I haven’t gotten the chance to stretch those muscles. Then I got into this show where it’s an education for me as an actor to work on comedy.

“The people who wrote it come from an improvisational background, and I’m a musical theater actor. I like to be overrehearsed, practice makes perfect, I like things to be set in stone. In this show you can’t really do that. You have to play with the audience.”

Samuels says the show is being embraced by both fans of the book and people who only know of it.

And a fun, and unexpected, one, too.