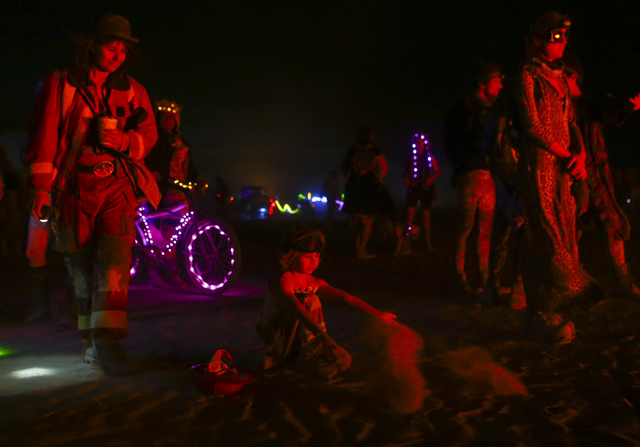 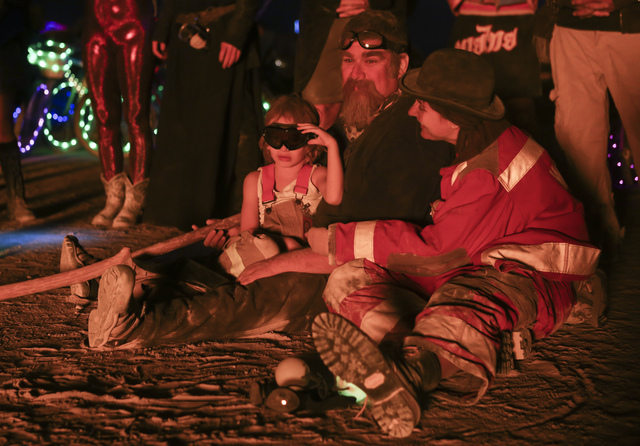 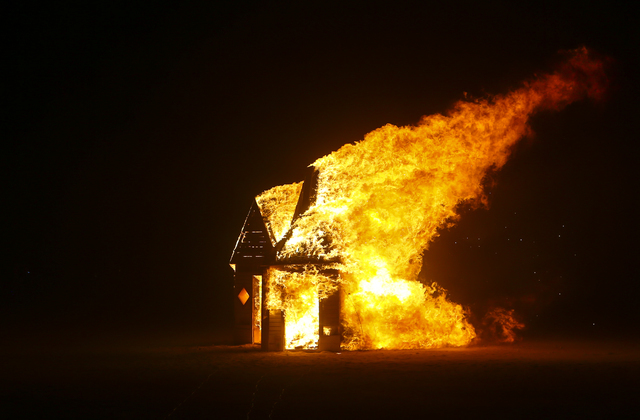 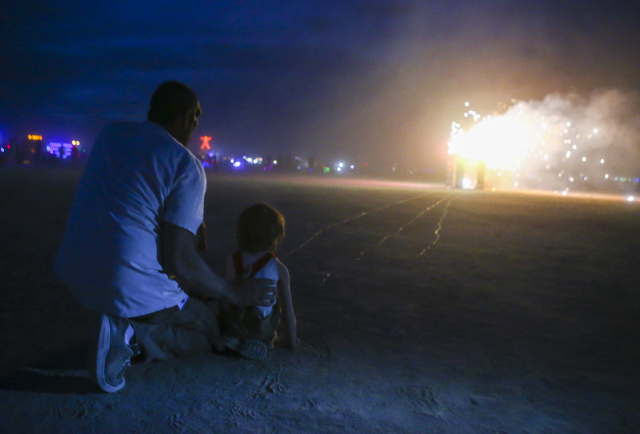 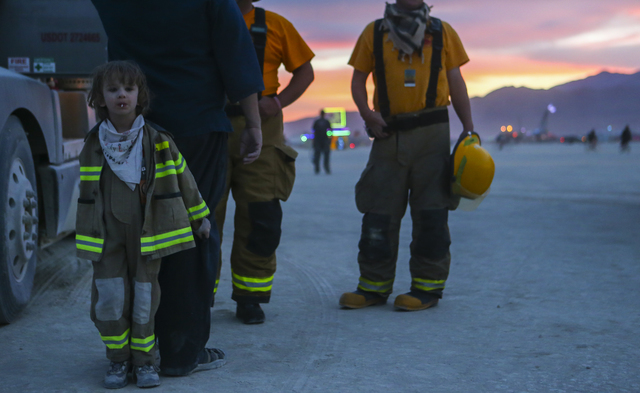 Sagan Bocskor, 5, who created the art installation Jedi Dog Temple, hides behind his dad, Leslie, before the burning of his art piece during Burning Man at the Black Rock Desert north of Reno on Thursday, Sept. 1, 2016. (Chase Stevens/Las Vegas Review-Journal) Follow @csstevensphoto 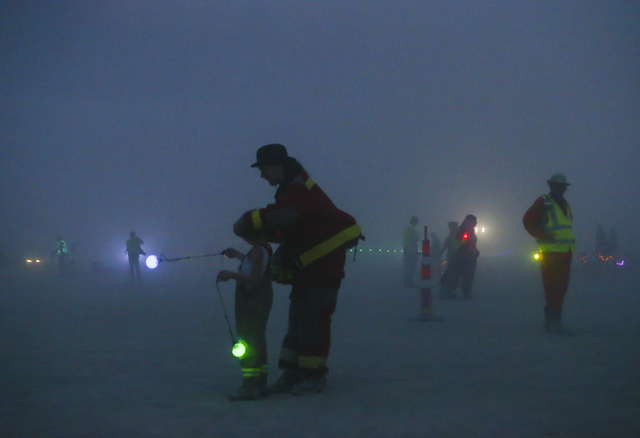 Cory Mervis-Bocskor checks on her son Sagan Bocskor, 5, before the burning of his art piece Jedi Dog Temple during Burning Man at the Black Rock Desert north of Reno on Thursday, Sept. 1, 2016. Bocskor is Burning Man's youngest artist to receive funding from the organization for an art piece. (Chase Stevens/Las Vegas Review-Journal) Follow @csstevensphoto 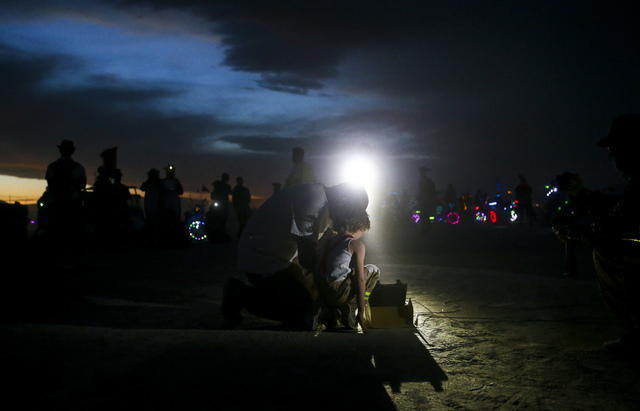 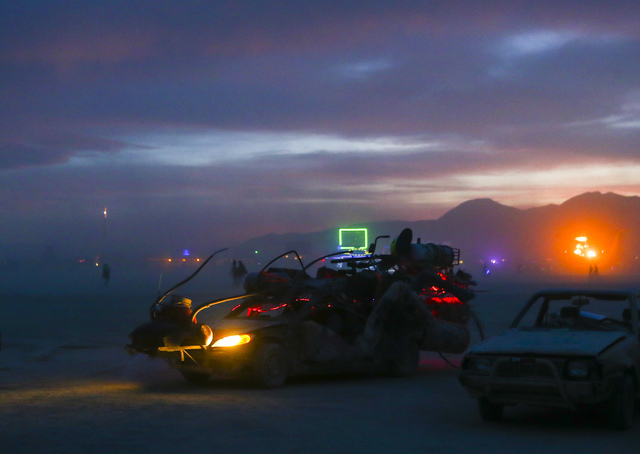 BLACK ROCK DESERT — At less than 8 feet tall, the Jedi Dog Temple is pint-sized compared with the other installations dotting Burning Man’s playa, and so is its creator.

Five-year-old Las Vegas native Sagan Bocskor wears a khaki firefighter’s coat as he prepares to watch the simple wooden structure he designed, with its peaked roof and three tiny doorways, disappear beneath flames and plumes of smoke.

Sagan first attended Burning Man as a 6-week-old infant, and his parents have brought him every year since but 2015. When his parents, Leslie Bocskor and Cory Mervis-Bocskor, asked what he wanted to do for this year’s festival, he declared he wanted to create a temple.

They submitted a proposal to Burning Man Arts for a Black Rock City Honorarium, 59 of which were awarded this year to help artists create installations for the annual festival in the Northern Nevada desert. Sagan is the youngest artist to receive one of the grants.

On the playa, Sagan’s temple stands about 1,300 feet from the Man, located approximately at the 5:30 mark of the clock-like layout known as Black Rock City.

In the blue-gray twilight, the dust gradually thickens, blurring the tiny temple and the people standing around it. Visibility quickly decreases to near white-out conditions.

“Sagan, we’re waiting for the wind to calm down,” Dave X, the fire art safety team manager at Burning Man, explains to the antsy boy, who is busily distracting himself with his lighted toys. The Jedi Dog Temple was scheduled to burn at 8 p.m., but the wind and dust delayed the lighting by a couple minutes.

Eric Rebollo, or Big E, as he’s known on the playa, is the pyrotechnician on this burn. He’s placed the fuel and fireworks inside the structure. A Las Vegan, Rebollo describes himself as “the go-to guy in Vegas if you want to burn something.”

Hand in hand, the two walk over to a black box on the ground, a few feet inside the perimeter of burn volunteers there to ensure spectators don’t get too close to the fire. Sagan pushes the button on the electronic remote that triggers the matches within the Jedi Dog Temple.

Within seconds, fireworks flash in the temple’s doorways and purple and green sparklers shoot from the roof.

As the show dies down, Sagan runs over to his mom and jumps into her arms.

Then, the evening’s bigger burn really begins as larger structures collapse and morph into a roaring bonfire spreading across the sky. Over the second half of the eight-day festival, 18 art installations will burn, including the Man, the festival’s namesake, on Saturday night.

Sagan, calm and content, sits between his mom and dad clutching black ski goggles to his face.

“What are we gonna build next year, Sagan?” Rebollo said.

In the midst of his chatter, one thing is clear: Next year’s creation will be bigger.