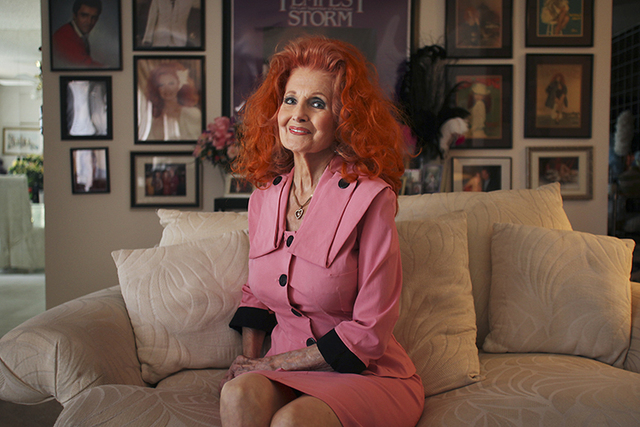 Burlesque legend Tempest Storm, shown in her home in 2011, is slated to participate in a panel discussion during “Putting the Sin in Sin City: 60 Years of Burlesque in Las Vegas” at 7 p.m. March 20 at the Clark County Library, 1401 E. Flamingo Road. Burlesque performers from the 1950s to the present are set to be on hand for the event. (View file photo)

Three years in the making, a documentary on the sometimes-turbulent life of burlesque legend Tempest Storm will preview April 30 in Toronto.

In the documentary trailer, Storm, 88, says she’s “never retired from burlesque, but sometimes I wonder was it really worth it.”

The heartache of being disowned by her daughter is captured in the documentary. Storm goes to her daughter’s Indiana home, hoping to mend years of estrangement, only to be turned away at the door.

“That’s the greatest sadness of her life. She has one child and one grandchild,” said Harvey Robbins, her longtime manager.

A Las Vegas resident since 2005, Storm’s story begins in Georgia. She left home early. “I had a bad childhood,” she said in a telephone interview over the weekend.

She went on to become an iconic exotic dancer.

She paid a price for her late 1950s marriage to Herb Jeffries, the lead singer in Duke Ellington’s Orchestra and also known as Hollywood’s first singing black cowboy.

The interracial marriage was considered scandalous at the time.

“Metro-Goldwyn-Mayer wanted to put her in movies. That ended. She lost a lot,” Robbins said.

“It really altered her career dream. She had a chance to do something with a label. She had done voice training.”

Today, said Robbins, “if that happened, nobody would blink an eye. Then it was a forbidden zone.”

She and Jeffries had a daughter, Patricia, in 1964 before divorcing. He died in May 2014 at the age of 100, but not before Storm reunited with him for the documentary.

Jill Abramson, ousted in 2014 as the first female executive editor of The New York Times, says she has no interest in returning to the newspaper industry.

Abramson made the comments after being introduced as the 22nd recipient of the Denver Press Club’s Damon Runyon Award on Saturday.

She’s working on a book about the future of media “in an era when people are reading with their thumbs.” She’s also writing a political column “that’s brought me back to the things I love, reporting and writing.”

She was dismissed after less than three years as executive editor, reportedly over issues that included her push for equal pay.

“I don’t think it’s just journalism,” she said. “I think there is a double standard applied to women who are in powerful positions in any profession.”

Pro golfer Jordan Spieth, trying to put his Masters meltdown behind him, partied with friends at Encore Beach Club on Saturday. A hard-core Dallas Cowboys fan, he was wearing a blue and white Denver Broncos hat. … Mike Agassi brought one of his son Andre Agassi’s U.S. Open trophies to the Marty Hennessy Inspiring Children Foundation gala on Saturday at Lavo (Palazzo) for photo opportunities that raised money. … Demetrius Shipp Jr., who portrays the late Tupac Shakur in the upcoming movie “All Eyez on Me,” with friends at Tao nightclub (The Venetian) on Saturday. Also there: “Teen Wolf” star Cody Christian, celebrating his 21st birthday Saturday. … Rapper Wiz Khalifa, dining with a group at Tao Asian Bistro (The Venetian) on Friday. … ESPN “SportsCenter” anchor Steve Levy, in the crowd at Pia Zadora’s show on Friday night at Piero’s Lounge.

“Tonight was the big Democratic debate between Hillary Clinton and Bernie Sanders. They discussed important issues such as national security, the economy and whose supporters are the most annoying on Facebook.” — Jimmy Fallon