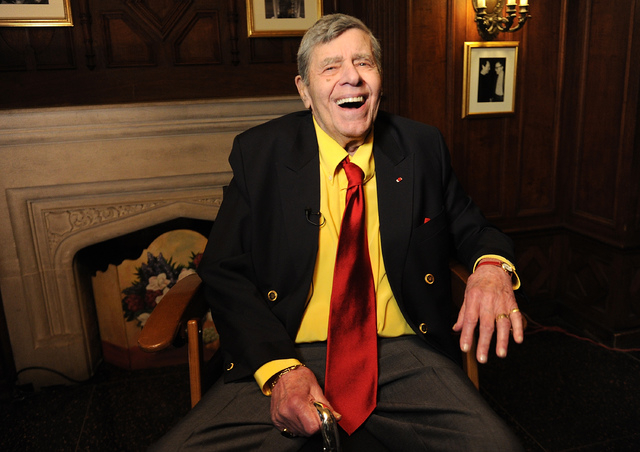 Entertainer Jerry Lewis poses for a portrait at the Friars Club before his 90th birthday celebration on Friday, April 8, 2016, in New York. (Brad Barket/Invision/AP) 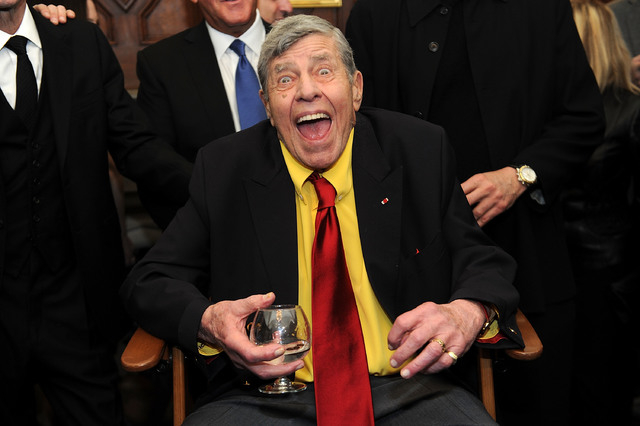 Jerry Lewis interacts with the press at the Friars Club before his 90th birthday celebration on Friday, April 8, 2016, in New York. (Brad Barket/Invision/AP) 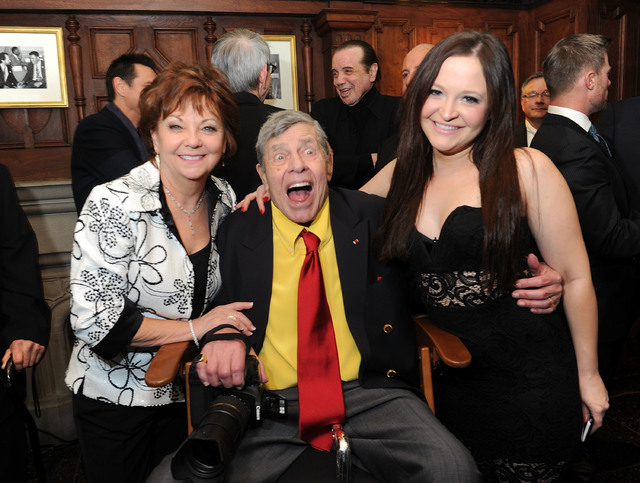 Entertainer Jerry Lewis, center, his wife, SanDee Pitnick, left, and his daughter Danielle Lewis pose for a portrait at the Friars Club before his 90th birthday celebration on Friday, April 8, 2016, in New York. (Brad Barket/Invision/AP) 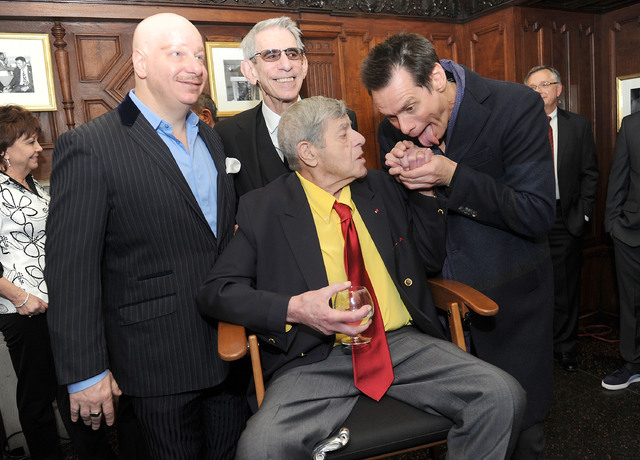 NEW YORK — At the Friars Club tribute for Jerry Lewis’ 90th birthday, many of the jokes were not about Jerry Lewis.

There were R-rated wisecracks Friday night about Donald Trump, Monica Lewinsky, doctors, sex and growing old from speakers including Richard Belzer, Freddie Roman and Max Alexander. When the subject did turn to Lewis, the kidding around turned to praise as Lewis was honored as a comic master, inspiration, and, for Belzer, a savior.

“My mother was very physical; she used to be beat me up or give me an enema for punishment,” said Belzer, one of Lewis’ closest friends. “Once in a while I would do a Jerry shtick … and my mother would laugh and sometimes not hit me.”

About 200 people squeezed into the first floor dining room for the 90-minute event. Lewis, whose birthday was last month, sat to the side of the dais, where he laughed and cried.

The Friars Club has long been like a second home for Lewis, whose name appears on the front of the building and whose pictures hang inside. Before the tribute, he sipped on a soda in the first floor bar, otherwise known as the Billy Crystal Room, and dined upstairs with such friends as Robert De Niro and Jim Carrey. A birthday card in the lobby was signed by comedian Gilbert Gottfried and former “Saturday Night Live” writer Alan Zweibel, among others.

The tribute touched upon many of the highlights of Lewis’ long and singular career, from his partnership with Dean Martin to such movies as “The Nutty Professor” and his stage performance in “Damn Yankees.” A compilation of pre-taped greetings included Steven Spielberg, Al Pacino and Don Rickles, who urged Lewis “to go to bed early.”

The mood heated up as the night unfolded. Belzer stripped to a T-shirt to show off the Jerry Lewis tattoo on his arm and singer Jack Jones removed his jacket and tie, bore down on “The Impossible Dream” from “Man of La Mancha” and got a standing ovation for hitting some impossible high notes.

Lewis, who had the final word, can be the most sentimental and irascible of comedians. He has been known to roast a few audience members and on Friday night he skipped any summaries of his career and scolded the crowd for not cheering louder, or perhaps not as loud as it did for Jones. Attendees laughed and applauded throughout the show.

“A performer can stand there and feel empty, because he has done very well, but he doesn’t hear anything of any consequence,” Lewis said, noting that the entertainers were not paid for the tribute. “They deserve a lot more, so let’s consider the fact that a performer will be there for you to entertain you and all they want from you is an acknowledgement that they’ve been there, OK?”