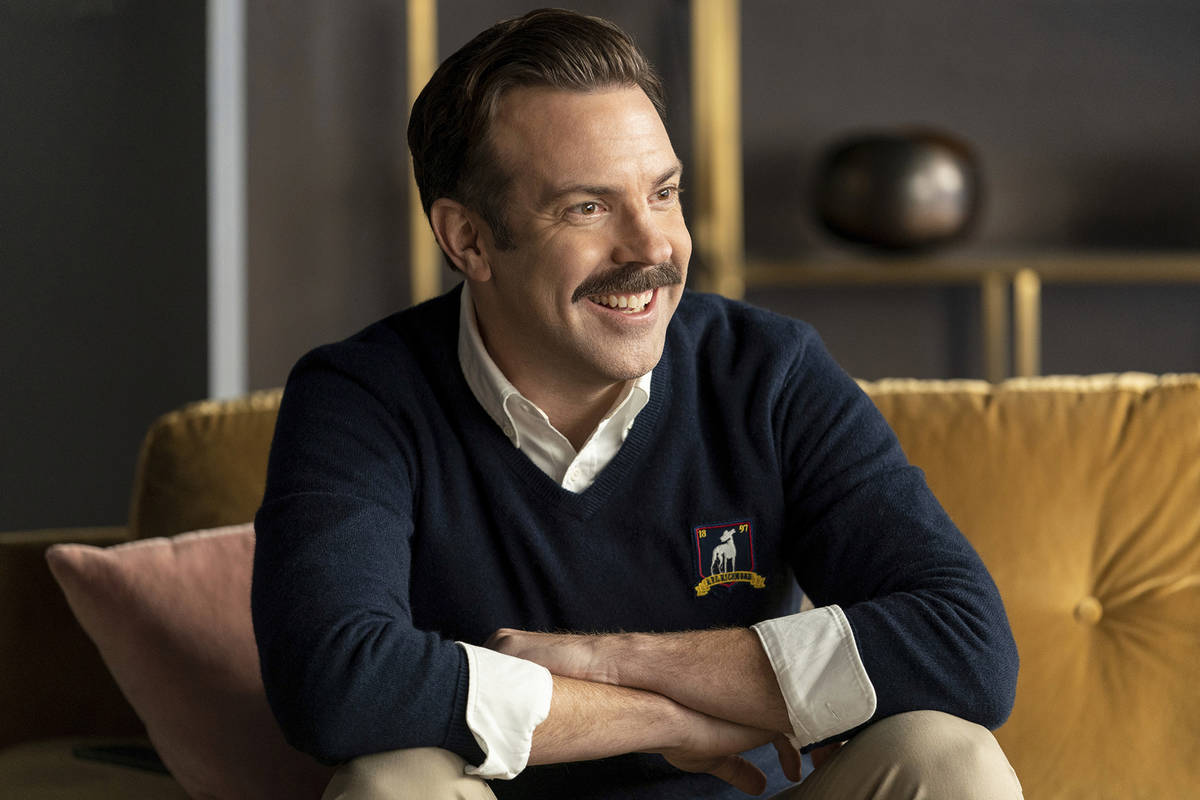 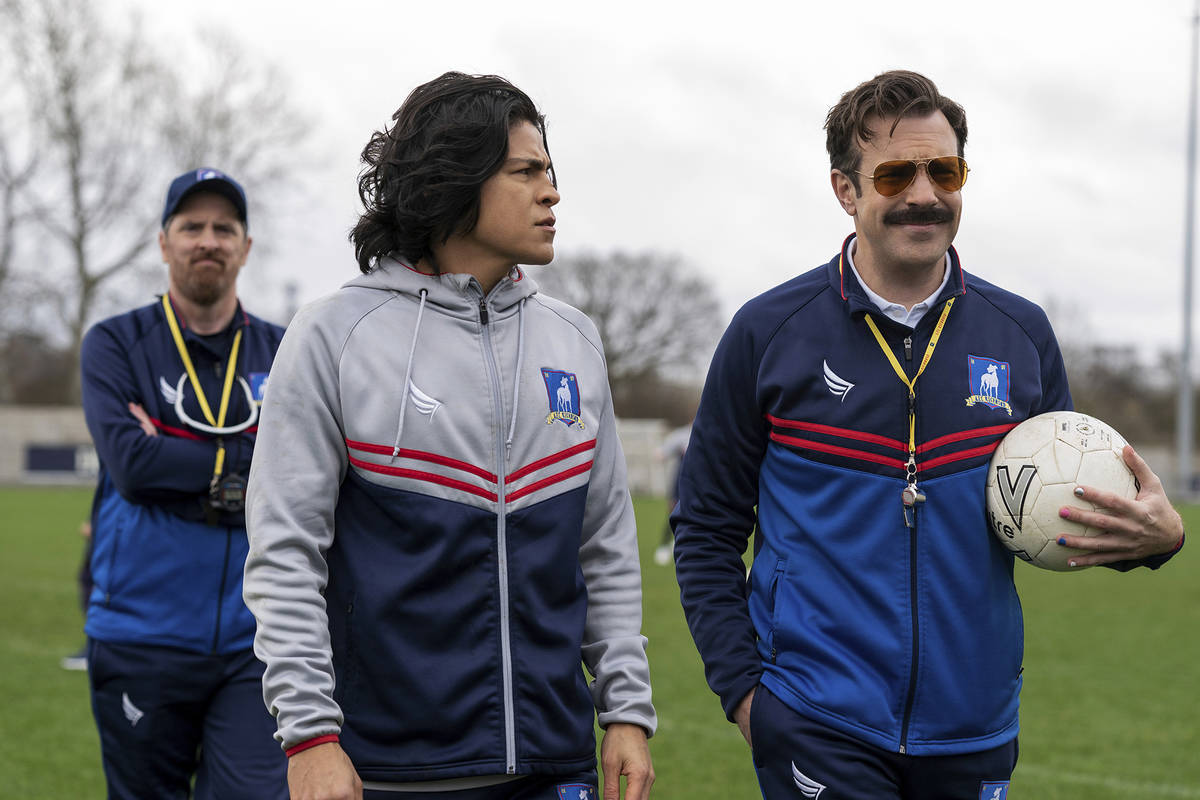 Sin City is called a lot of things, including Life U. At least that’s the way Jason Sudeikis describes it on a weekday afternoon after looking at final edits of the new season of his hit show “Ted Lasso.”

Sudeikis, 45 and formerly of “Saturday Night Live” and “Horrible Bosses” fame, figures he might not have a career if he hadn’t spent time in Las Vegas.

“Las Vegas was like a comedy graduate school for me. It was a university of life,” said the Overland Park, Kansas, native. “It shaped me as a person and prepared me to write at ‘SNL.’ I grew up a lot during my time in Vegas.”

The year was 2002, and Sudeikis was a founding member of The Second City Las Vegas at the Flamingo. He moved to Vegas for a year, precisely one year before “SNL” would make a grab for him as a writer. But it was an important year that cleared his head and focused his comedy.

“Talk about the universe sending you signals,” Sudeikis said with a sigh. “I had my stuff with stress and anxiety that manifested in various ways at the time. Just being in the desert with the mountains and this city that is so vibrant changed me. And the funny thing is, you never know when you’re in the middle of an important part of your life until you’re through it and reflecting — like now.”

One last thing: “Vegas is where Joe Kelly and I worked together a lot,” Sudeikis said. “We learned we could write really quickly and write funny. We found that vibration that takes you higher in your writing.” Incidentally, his friend Kelly wrote and developed “Ted Lasso” with Sudeikis.

Review Journal: What is the secret of “Ted Lasso”’s success as a series?

JS: Success? I’m only aware of hitting editing deadlines today. Honestly, we’re just truly flattered by the reception for this show. I wish I knew why it was so popular because I’d keep it a secret and bottle it up. Or I’d teach one of those master classes online.

What can you reveal about season two?

The second season is about the notion that sometimes the best way to help others is to help yourself. It’s about self-love, but not in a cheeky, glib way. I actually refer to it as “The Empire Strikes Back” season. Is all that confusing? You might have to watch.

Isn’t “Ted” really about second chances and how they can occur at any time in life?

Speaking of adulthood … Did you freak out at 40? Preparing to lose your mind at 50?

I definitely feel I’m in the midst of change. I’m five years from 50. I’m trying to glide into it. Sometimes when you resist, that something you’re resisting will somehow hit your harder. I do have to admit I’m at an age where the universe does send you signals and signs. You know what? Sometimes, you have to listen to the universe.

Ted Lasso is such a positive person. Are you that way in life? Or are you cursing out people who cut you off on the highway?

Damn it, I feel like I have some of his positivity. But I’m not positive all the time. I wish I could bottle his positivity and spray it on folks. I think they do that in California with THC. Honestly, I think with Ted, it’s almost like that old sales technique where you answer the phone with a smile. You write in your gratitude journals. There are various forms of positivity or things that kick-start us into moving out of the negative. All I can say is try it.

How does Ted stay so optimistic?

Maybe there are things we don’t know. Maybe he listens to sun salutations or he just turns up the Spice Girls really loud.

It can be a big, bad negative world, so this message is welcome.

Yeah, what an interesting time to have a show where the main character is so optimistic. It’s a good message to put out into the world, although we could never have anticipated the world we are in when the show stared. We live in interesting times, and life is about interesting timing. The bottom line is, bullies will exist. Cynicism will exist. All of us have egos. It’s how we go about dealing with those things that matters. Sometimes, it’s only natural to spotlight the negative things. It’s not to say that they don’t exist. Do you swim in there or not?

Rumor is we’re going to see a “bad” version of Ted this season.

Bad, worse or different-than-normal Ted? It might be a seedling. Or maybe Ted isn’t always Jimmy Stewart or Mr. Rogers.

Some “SNL” business: Will you return this season to reprise playing President Biden. You were the one who originated the role on the show.

I don’t think so. I was in the UK filming when they chose icon Jim Carrey to do it. Not a bad person to lose a gig to. I’m not complaining about it. The last time I played Biden was at the end of 2020. It was one of my most exciting times on “SNL” because Eddie Murphy was hosting and he’s a hero of mine. I heard, “Hey, Jason, you’re going to do a Biden thing.” The best part of it was having Eddie say my name when he did the good night at the end of the show. He says it differently than my father says it. That’s what I’ll always remember. And what a way to go out on top.

Can’t let you go without asking you the big question: What’s a great Sunday for you when you’re not working?

Oh man, you’re making me dream about a Sunday in New York City. It’s great when I can wake up with my kids (Otis, 7, Daisy, 4) in bed with me and they sleep until nine. I roll over and have to wake them up by touching their little backs. By the way, this has never happened ever in real life. They’re up at six in the morning jumping on me. But then we go to an amazing brunch spot and hit the park for some wiffle ball. On hot days, we run into the fountain at the playground, and I don’t care if the water is dirty. All of this leads up to pizza for dinner and then a movie I grew up with, like “Splash.” Inevitably, I get talked out of my movie and we watch the first “Harry Potter.” Then the kids go to sleep and the floating crap game I host comes to life. It’s just your basic Sunday.