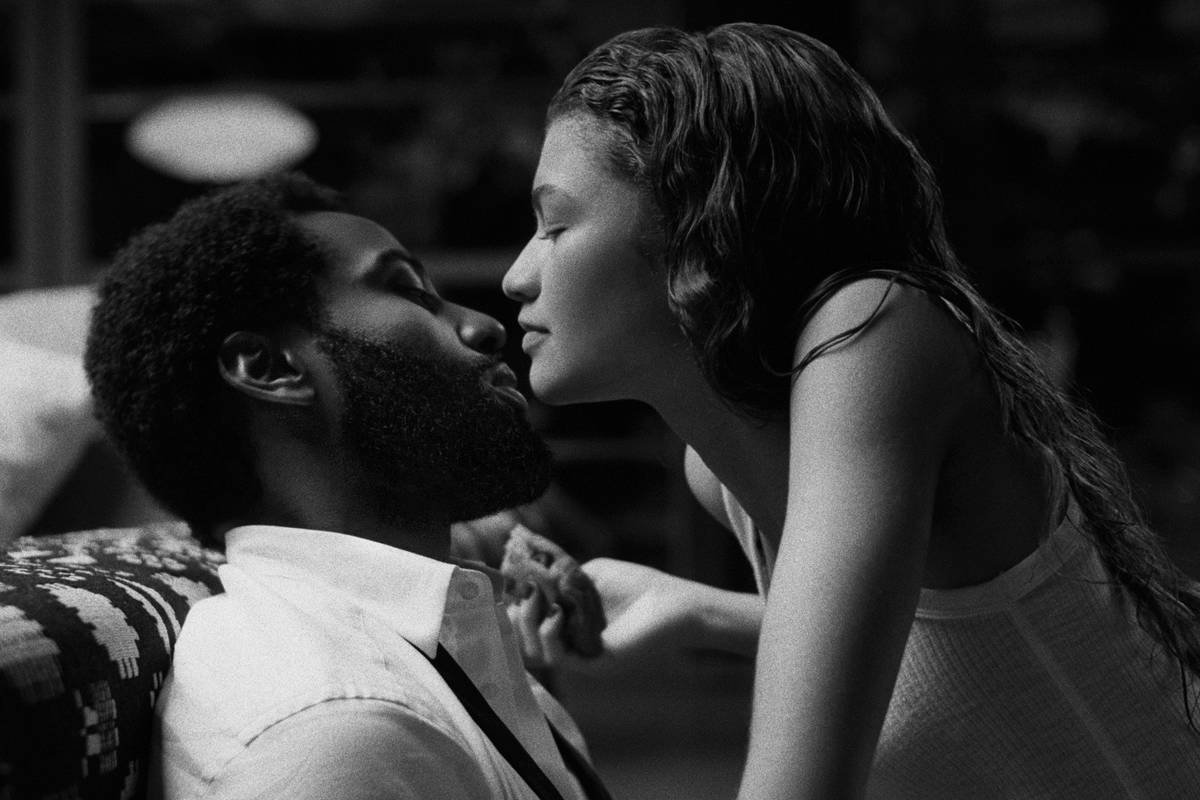 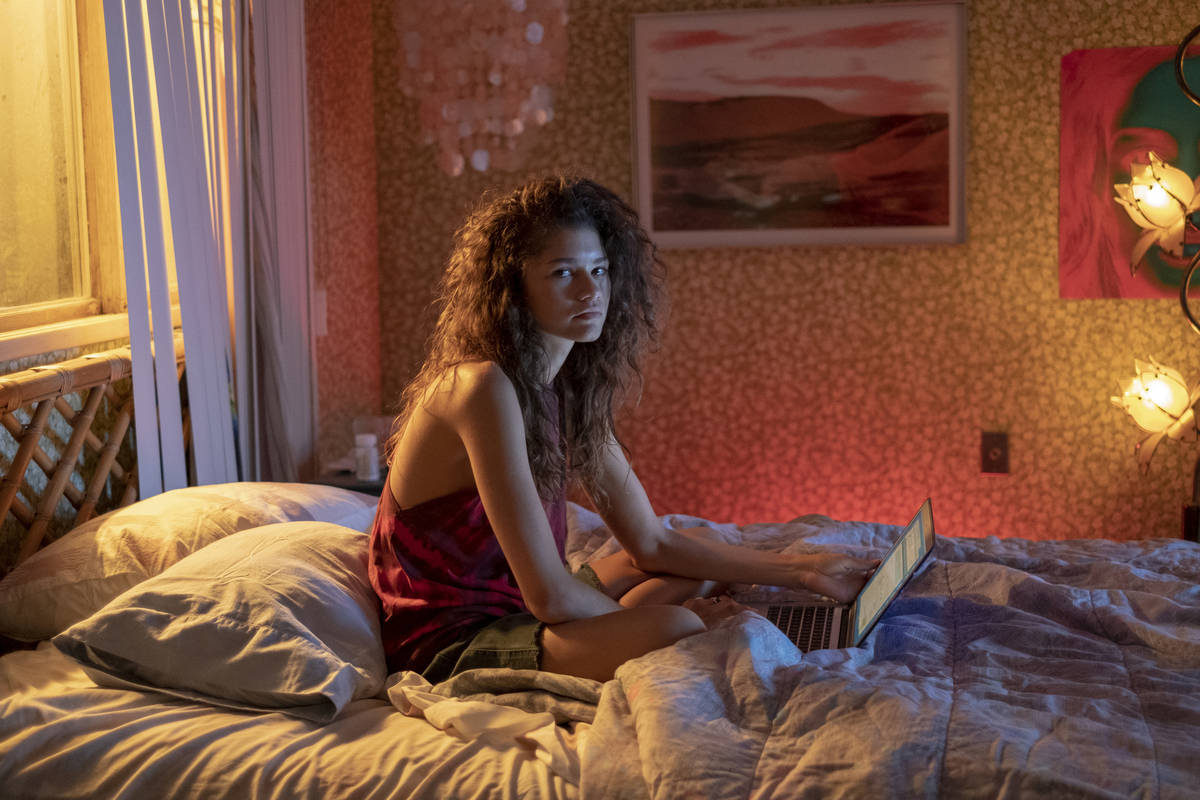 The hottest young actress in Hollywood can be found at home on a Saturday night. Where else would she be during a pandemic? But if you expect to find Zendaya in her jammies, binge-watching shows, think again.

At age 24, the star of the HBO hit “Euphoria” is a serious young artist. She Zooms in wearing a gray suit, pristine white shirt, and power gold necklace. She has long, straight hair and the perfect berry-colored lipstick.

It’s a statement outfit befitting someone whose name, in a few weeks, might follow the words “And the nominees for best actress are … .”

The Oscar might go to the former Disney Channel star and Oakland, California, native for her role in the new film “Malcolm & Marie,” produced by “Z” (as her friends call her) and created, directed, produced and written by “Euphoria” co-star Sam Levinson. Debuting Feb. 5 on Netflix, the movie was shot entirely during the pandemic, and it couldn’t be buzzier.

Malcolm (John David Washington) is a young director who just returned from his premiere with Marie, his actress and hot mess of a longtime girlfriend. Malcolm has done himself in: He made a speech after the film but forgot to thank Marie. It leads to the mother of all fights.

“She goes toe to toe in a 16-round fight with her boyfriend in a way that has humor and grace to it,” Zendaya says.

Review-Journal: What’s your idea of a perfect Sunday?

Zendaya: I get up pretty early most days of my life, so a Sunday can be a great day to just sleep in and catch up. … You can just glide into the day. I’m not a big breakfast person, but I’ll have some juice and a little something and then start the day. Maybe go for a walk or a drive. I’m not much of a cook, but later I’ll order some food, binge-watch some shows.

Tell us how “Malcolm & Marie” was conceived during lockdown?

Sam and I were actually geared up to start the new season of “Euphoria,” but due to the pandemic it wasn’t happening yet. … During quarantine, he has even acted like a creative lighthouse for me to find some kind of hope. One day, he said, “Hey, we could shoot something in quarantine. Maybe a movie.” He went away and came back with some interesting ideas and finally said, ‘Yo, Z, I think I got the one. What if it was just two people. We stripped everything away. And we shoot it on film in black and white. It’s a couple’s piece set in a span of a few hours. You have a filmmaker coming home from his premiere and he’s with his girl. He forgets to thank her during his speech. Chaos ensues.

The next day, he sent over 15 written pages. He left me on a cliffhanger. I called him and said, “OK, Malcolm just went in on her on something. Now what? I’m losing it. Give me something!”

Why was it imperative that John David Washington (“Tenet”) say yes to the role of Malcolm?

Sam cold-called him and pitched him the idea. We weren’t sure he would say yes. Originally, he said it would be interesting. I said, “That isn’t a yes.” Six days later, John David was sent the whole script and then came the yes.

How did you and John David get into couple mode?

Well, it was 2020, so I had nothing but time on my hands. The good thing is when we got to our shooting location, which was this beautiful house, we also had time. And by we, I’m meaning me, John David and Sam. We did a lot of workshopping of the script by really rehearsing and digging into the material. I’ve never had the time to live with something for this long. We talked about love and relationships and then we got silly and talked about hip-hop or whatever the heck was on our minds that day. Those conversations bled into the story. It was a special thing. We had the freedom and space to create.

A theme of the film is thanking the people who make our lives possible. Can you relate?

I could relate. A big portion of this movie is about acknowledging the people in our lives who make it possible for us to do what we do. Marie says, “All I wanted was a thank-you.” We all want to be appreciated and valued for what we bring to relationships. Life is a collaborative effort. It’s not just you and you only.

You’ve also stepped behind the scenes to produce this film. Was that a challenge?

I’ve never been in a situation where I can say “Not only did I get to invest in my own movie, but I also own part of my own movie. If it does well, then I do well.” I feel very lucky that my contributions are taken seriously. As a young black woman, I’m fortunate to get credit and financial backing.

Are you a tough critic when it comes to yourself?

I’ve had to learn how to trust my own instincts. I still get very nervous. I’m very self-critical about doing the best I can do. Self-doubt can be stifling. It can make you not try things because you’re too afraid of messing up. Something like this movie allowed me to be a little more confident when it came to my instincts.