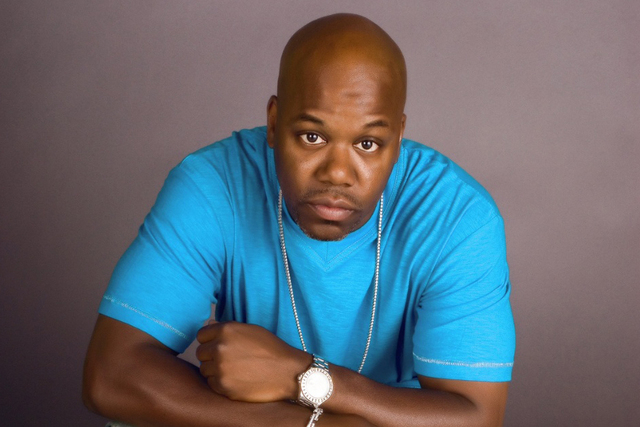 Too Short is the legendary rapper behind the songs “The Ghetto,” “Blow the Whistle,” “I’m a Player,” “Gettin’ It” and storytelling lyrics about pimpin’, blunts and booty-bouncing with “Nina, Melina, Sabrina and Tina.”

What percentage of his lascivious songs have been autobiographical?

“Most songs are not true. They’re just to be entertaining,” is the frank answer I get from Too Short (originally Todd Shaw from South Central Los Angeles and Oakland, Calif.).

When he tells people he’s not the crazy pimp from his songs, they don’t necessarily know how to take it.

“A prostitute got mad at me, because I told her I wasn’t a pimp,” and then she cussed him out, he recalls.

“It was disturbing to her,” he says. “But that’s what makes artistry good, is you make it believable.”

Too Short will perform this week at LAX nightclub in the Luxor during “Throwback Thursdays.”

To be clear, some of his songs are about him, and some are about people he’s experienced.

“But a lot of it is just songwriting,” he says. “Not even if we were sitting next to each other talking about life would I tell you all of my story. I just don’t throw it out there like that.”

In the 1990s especially, there was a constant refrain in pop culture: “How much of rap music is documentary?”

In those ’90s, quite a few pundits decried various rappers as villains, especially those with police rap sheets. Some blowback was alarmism, some was prejudice, but Too Short says the industry can take a lot of blame.

“I think hip-hop brought it on itself,” Too Short says. “When rappers got a chance to talk to the media, they would get in the interview and say, ‘It’s all real life.’

“They play these characters, and then they can’t stop playing the character when they’re not working. So therefore, it resonates to the fans and the media as, ‘This (expletive) is supposed to be real.’”

In general, he says, “hip-hop has been lying from day one.”

“It’s entertainment. Nobody is as rich as they say they are. Nobody lives in the mansions that are in the videos. They rent the cars. They rent the girls,” Too Short says.

“You’re not gonna come to my house at 7 in the morning, when I wake up, and it’s like 15 girls laying over the couches and stuff. It’s not like that.”

“This is the ‘realest’ interview I’ve ever had,” I say.

“Don’t get me twisted. We do live that lifestyle” sometimes, he says. “It’s just not as over-exaggerated as the music videos.”

“I made a mad dash escape shortly after the economy collapsed, and Vegas got real hard to live in,” Too Short says.

Now, he’s back in Southern California, which might be more expensive, but there are more gigs.

“I love Vegas,” he says. “I come to Vegas all the time. … Check into a hotel for a day or two and enjoy the city. It’s not so much all about the clubs, like it used to be. Now, I like to take in whatever entertainment Vegas has to offer. I like the shows, I like the restaurants and concerts.”

In L.A., Too Short has been constructing a high-tech media facility, 15,000 feet of studios for music, filming, editing, uploading, marketing, public relations and administration.

He divulges his plans to release a new album in September. About the same time, he’ll put out a photo-text book and a mini-docuseries.

Too Short has never had difficulty finding collaborators during a 30-year rap career. He worked with both 2Pac and Biggie. In recent years, he teamed with Wiz Khalifa, Jay Z and Lady Gaga.

The secret to his success has been to focus on quality first.

“It’s not so much PR, or being on a certain label. It’s how you handle yourself and how good the music is. That’s where the longevity is. Anything will get you in the door. How do you stay in there? You’ve gotta have some kind of integrity.”

But Too Short, 49, has yet another announcement to make here: This could be his last album for the foreseeable future.

“I honestly can’t say when will be the next time I’ll step up and try to make another album. After 50, I really want to focus on working with hotter artists” as an executive producer on a new label he’s starting.

But for 2016, he has one more collection of wild songs to give to the world.