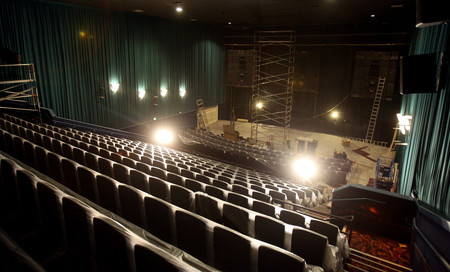 Everybody wants to get into the act. The really big big-screen act, that is.

And this weekend, Cinemark’s South Point joins the fray, debuting its new Cinemark XD system in one auditorium.

The Michael Jackson concert movie "This Is It" launches the system this weekend at the South Point in Las Vegas, one of 11 locations joining the chain’s three existing test sites before Thanksgiving.

That revamped auditorium includes a silver screen, which enables the theater to show 3-D attractions, plus a custom-designed sound system and reconfigured seating.

But not one requiring special-format prints.

Unlike IMAX and D-BOX attractions that require special formatting, with Cinemark XD "nothing has to be remastered or reformatted," he explains. Instead, "we just download" and project "an existing digital print."

That flexibility means the South Point can rotate XD attractions, adding big releases week to week, Meredith points out. (By contrast, IMAX versions of blockbuster movies are contracted to stay in theaters for several weeks, as when the IMAX 3-D debut of "Harry Potter and the Half-Blood Prince" had to wait two weeks while "Transformers: Revenge of the Fallen" concluded its IMAX run.)

"With a lot of these" releases, "we’ll be the only theater showing them in a large format," Meredith says. "There’s a lot of flexibility there."

There’s also a lot of demand for the XD presentations at other Cinemark theaters, he adds.

Audiences must pay for the privilege, however. As with IMAX and 3-D presentations, moviegoers will pay a premium — in the $3 range — for the enhanced presentation.

That hasn’t stopped audiences from embracing IMAX or D-BOX, however.

"We’re very, very happy" with D-BOX, which debuted at the Cannery in July, reports Galaxy president Rafe Cohen. "People like the experience."

And they’re willing to pay for it.

Regal’s three IMAX locations in Southern Nevada "have been very warmly received," according to Russ Nunley, vice president of marketing and communications. "The response and box-office business (have) surpassed our expectations."

As for Cinemark, there’s no decision yet regarding additional XD locations at another of the chain’s six Southern Nevada locations.