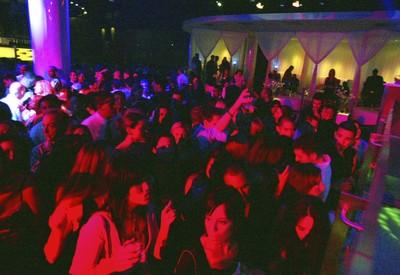 It’s another Saturday at Pure, and DJ Hollywood has the crowd in a tizzy.

The venue’s resident DJ has Bob Sinclar’s, "World Hold On," pumping through the sound system to the delight of the partygoers, who have been a raucous bunch all night. Before Sinclar’s hit, it was songs like T.I.’s "Bring Em Out" and Memphis Bleek’s "Like That" drawing roars from the patrons.

It seems whatever DJ Hollywood plays, the crowd embraces him more and more.

But that’s what comes with the territory of being Las Vegas’ No. 1 DJ. And it’s something he appreciates, but never takes for granted every time he steps behind the turntables.

From his first days spinning at his high school dance parties to rocking the crowds at massive venues across the country, DJ Hollywood has worked hard to make a name for himself as one of the nation’s premier DJs.

He arrived on the scene in 1994, coming all the way from Linwood, N.J., for what he called a "life experience and opportunity." He took jobs as a waiter working five double shifts a week at two casinos before getting behind the turntables.

Soon, he was spinning at the Luxor’s former RA nightclub and Rain nightclub at the Palms before hooking up with Pure Management Group and being named its corporate program director.

"With more than 12 years of performing everywhere from RA to Rain," Hollywood said, "it just seemed like the next step to work for the top nightclub chain in the world and program all of their venues."

The DJ scene has grown leaps and bounds since Hollywood first started, going from a small population more than a decade ago to hundreds trying to break onto the scene and land those coveted residencies at top nightclubs.

"I’ve gotten the opportunity to meet a lot of brilliant music minds over the years, and although it’s extremely competitive and cut-throat at times, in my experience, it’s a nice community filled with enormous talent."

Spinning at Pure on Tuesdays, Fridays and Saturdays is something Hollywood said he feels fortunate to be doing.

"Every DJ’s goal is to get to perform in front of a huge audience or in a premiere nightspot," he said. "I get to do both every week."

When he’s not working, Hollywood tries to show his love for some of his own favorites on the scene, including DJs Frankie, R.O.B., Ikon, Vice and David Christian.

"It’s a rare occasion when I’m not working," Hollywood said, "but when I get that chance, I like to support (them)."

He has visions of running his own nightclub down the road, but for the time being, he couldn’t ask to be in a better situation.

Big Night For Light — The folks at Light Group headquarters should be pleased after hosting the Yahoo! Sports All Star Fantasy Football League charity event last Friday at Light nightclub inside the Bellagio.

Light nightclub soon will shut down for a major facelift. It’s rumored that Light Group management is tinkering with the idea of making the venue a two-level establishment, which would be a welcomed look to one of the veteran nightclubs on the scene.

Jeremy Pond is the celebrity writer for the Las Vegas Review-Journal and Vegas Confidential. His column appears Fridays in Neon and online at www.reviewjournal.com and www.normclarke.com. He can be reached at 383-0298 or via e-mail at jpond@reviewjournal.com.