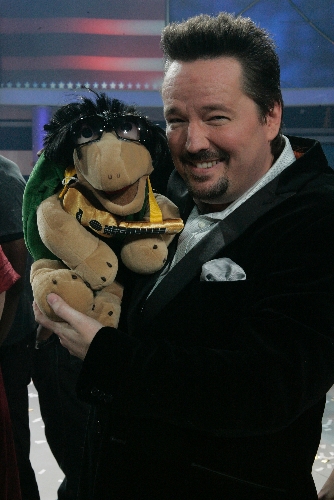 It has to be one of the biggest rags-to-riches story you’ll ever see. When Terry Fator was a kid in Texas, he did janitorial work and painted houses for his family’s business. Even then, he practiced ventriloquism on the side. But who knew he’d someday get a $100 million contract doing his favorite thing?

Success never came easy. As an adult, he toiled for years on stages around the country, singing through his puppet characters, a routine few if any acts made as a career. As recently as 2007, he walked onstage in South Texas and spotted just one kid in the audience. One, lone 12-year-old.

“Man, I’ll tell you, it was unbelievably discouraging,” Fator, 43, says.

He started to perform for that kid. A few other teens sat down, but this wasn’t the positive development he thought it was.

“I’m thinking, ‘OK, good, I’ve finally got somebody else in here, so maybe we could actually build a crowd.’ Turned out they were the custodial staff, and about five minutes after they came in, they started folding the chairs up.”

So, Fator gave the kid a DVD and CD.

“I thanked him for being my only person, and then I called my wife and said, ‘I don’t want to do this anymore.’ “

Melinda convinced him it was a hard life sometimes, but she reminded him he had good days, too. This was right, he thought, and he kept working another day.

Soon after that, he made the cut of auditions for NBC’s “America’s Got Talent,” and he was a hit, singing via puppets “What A Wonderful World” (as the voice of Kermit the Frog), and Etta James’ “At Last” (as an Etta-ish puppet).

Next thing you know, he was a regular at the Las Vegas Hilton. Then, he signed a $100 million contract to perform at The Mirage starting in 2009.

One of the first things he did with his money was buy his wife a new wedding ring.

“I was too poor when we got married 17 years ago to actually buy her a real wedding ring. I had to buy her a $10 wedding band that I found in a pawnshop on the Strip in Vegas.” (He got the ring here, but they married in Colorado.)

He’s always craved being the center of attention, and she’s always been right there with him.

“For years, when I was unknown, if we ever went to a party,” he says, “I would always tell her, ‘Make sure people know I’m a ventriloquist.’ And I would entertain people. I would bring karaoke tracks and do impressions.”

Once he hit it rich, Melinda Fator quit working at a veterinarian’s clinic after 10 years.

“I was able to give her early retirement,” Fator says, proudly, although the Fators will be doing charity work for the no-kill animal shelter, Best Friends, in Utah.

“She wants to actually drive up occasionally and volunteer with the cats and dogs, and we’re going to be donating money to help them build more buildings and keep that place running.”

He could use some of his money to upgrade his puppets to, say, Disney-esque automatons. But that would be dumb, he says.

“We’re not trying to make the flashiest show,” he says. “We’re just trying to go back to old-time Vegas, and just have a guy up there with a lot of talent doing things people enjoy seeing.

“If you looked at the season that I did with ‘America’s Got Talent,’ every other performer had flash pots (bright lights) going off, and sexy dancers going all over the place,” Fator says. “And when it was my turn, it was me and a puppet. I think one time they gave me fog on the stage.”

If there’s a lesson to be learned from Fator, it’s that he learned what he wanted to do early in life — at age 10 or so — and practiced. He got into ventriloquism after reading a book about it. He studied “Sesame Street” and “The Muppet Show,” which taught him “how lifelike a puppet could actually be.”

He got here without “any shortcuts,” he says.

People who wish to get famous fast, especially kids, “want to use a reality show as a shortcut to doing the work,” he says.

But, he cautions, he never would have developed his $100 million skills without surviving decades-long struggles.

That’s the inspirational message of his autobiography, “Who’s The Dummy Now?” he says.

And that’s the true rags-to-riches story of the $100 million man.

Doug Elfman’s column appears on Mondays, Tuesdays and Fridays. Contact him at 702-383-0391 or e-mail him at delfman@reviewjournal.com. He also blogs at reviewjournal.com/elfman.