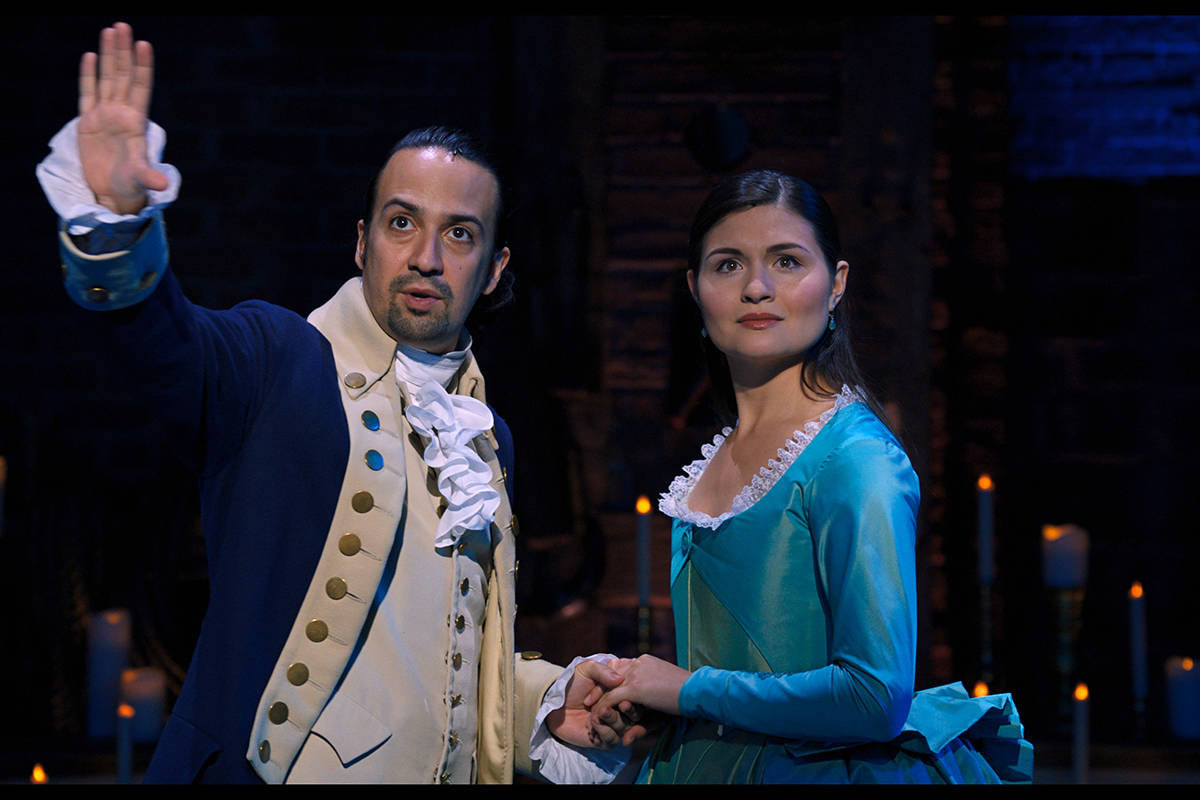 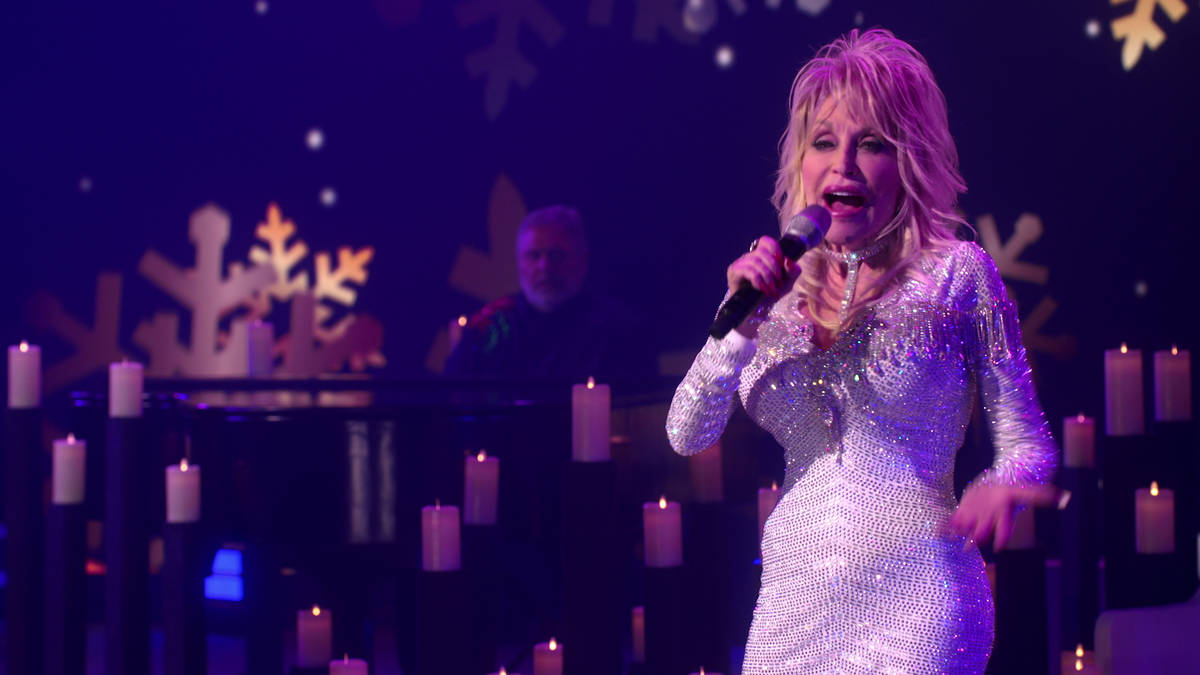 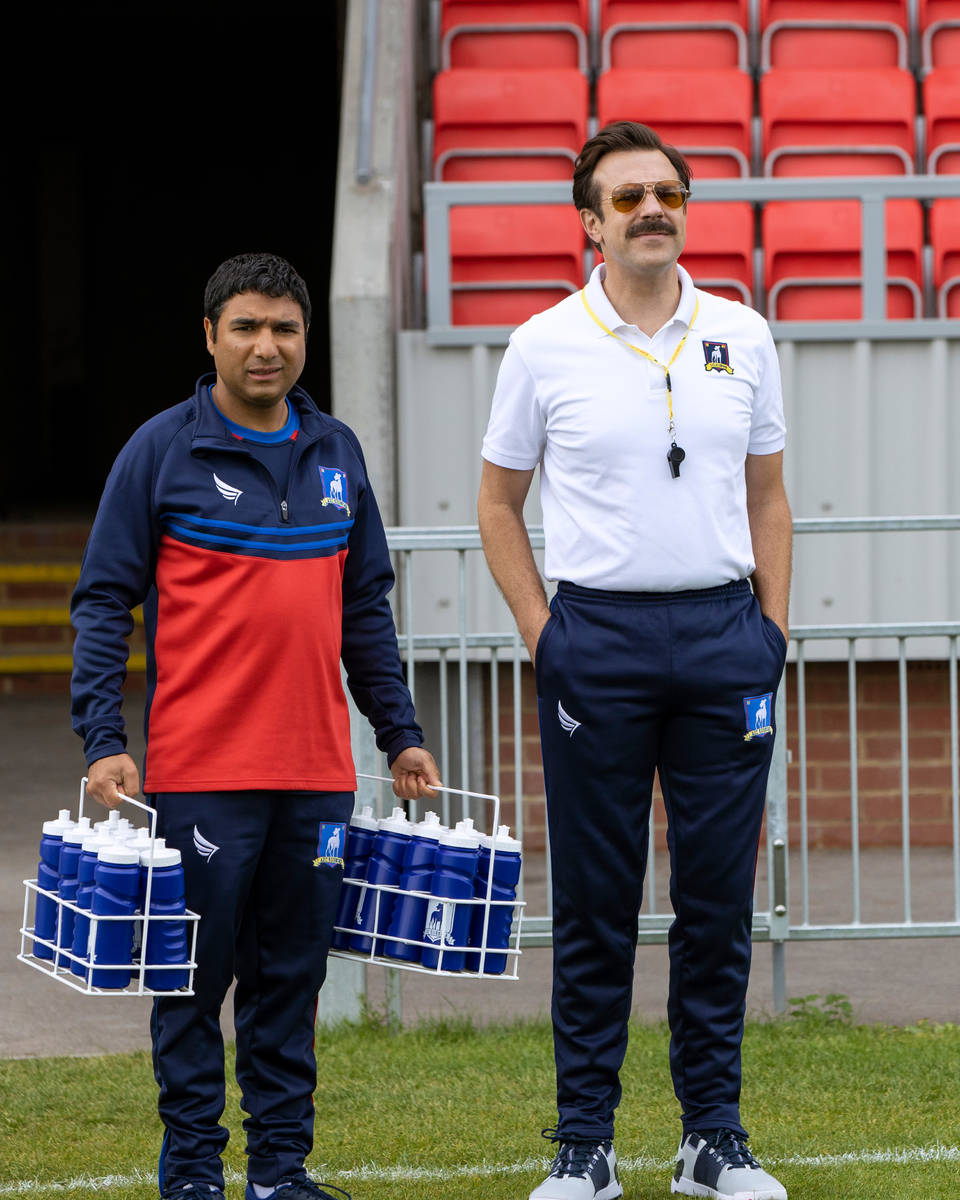 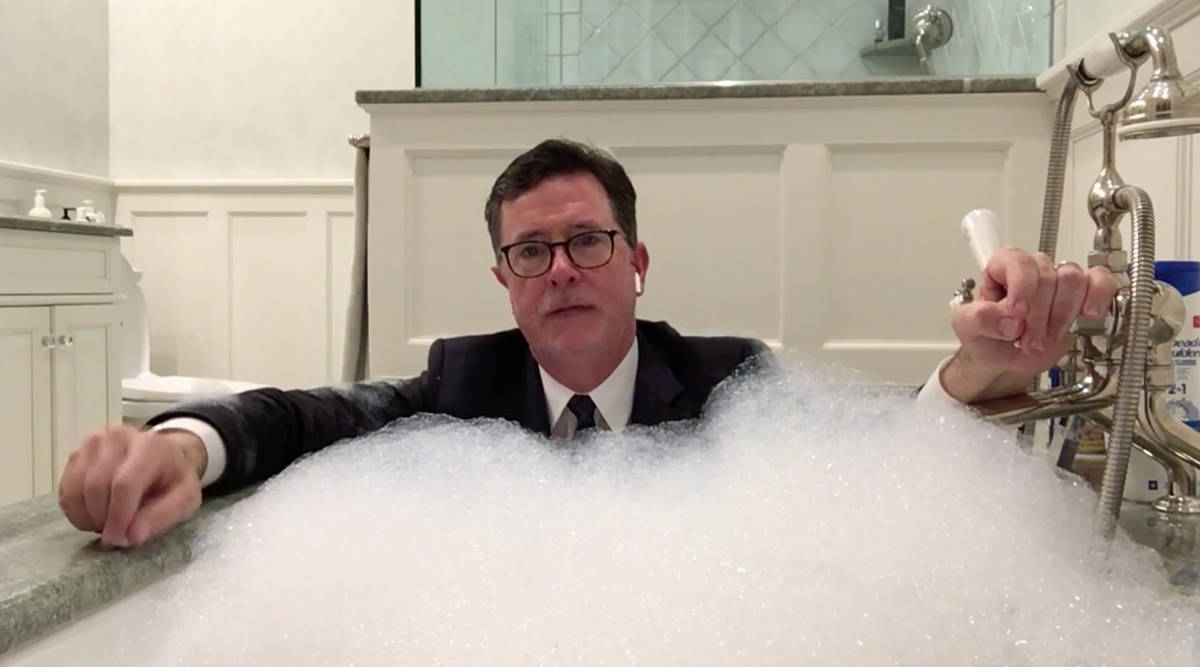 Stephen Colbert appears in his bathtub in his first broadcast from home during the pandemic. (CBS) 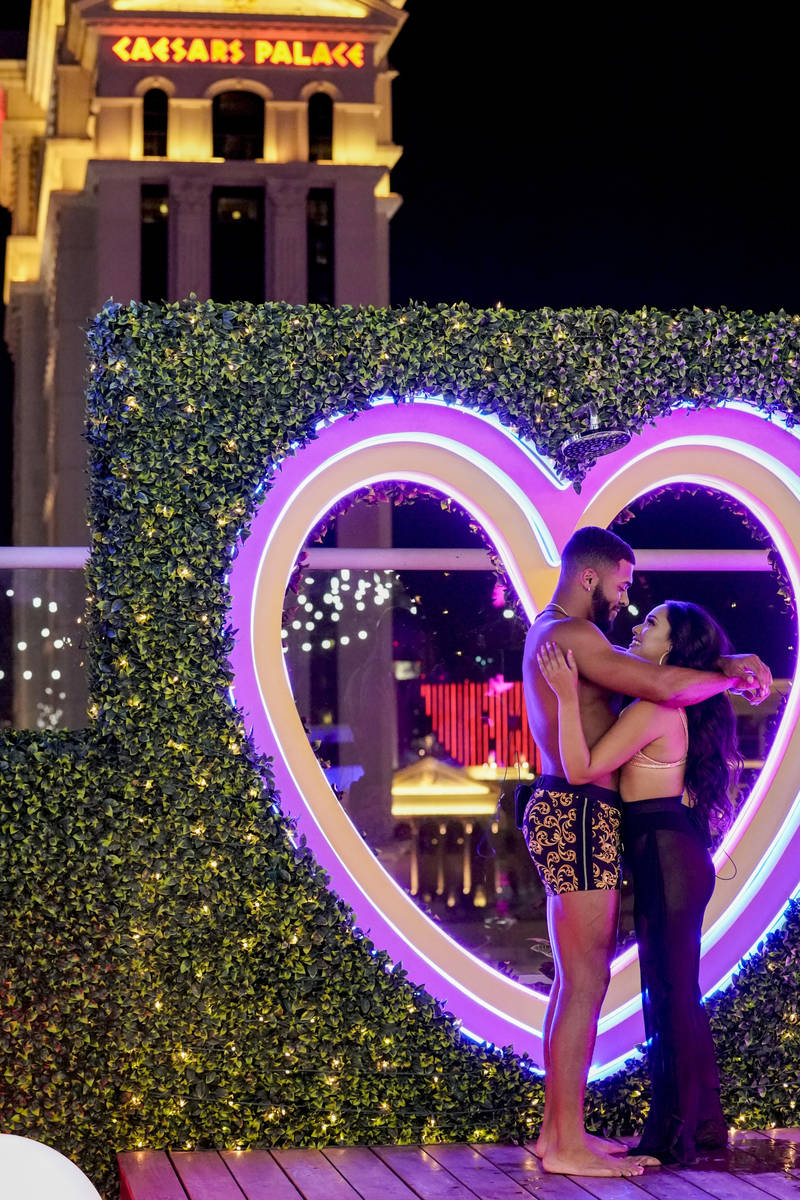 Johnny Middlebrooks and Cely Vazquez appear in a scene from "Love Island." The dating series took over The Cromwell this summer. (Robert Voets/CBS Entertainment) 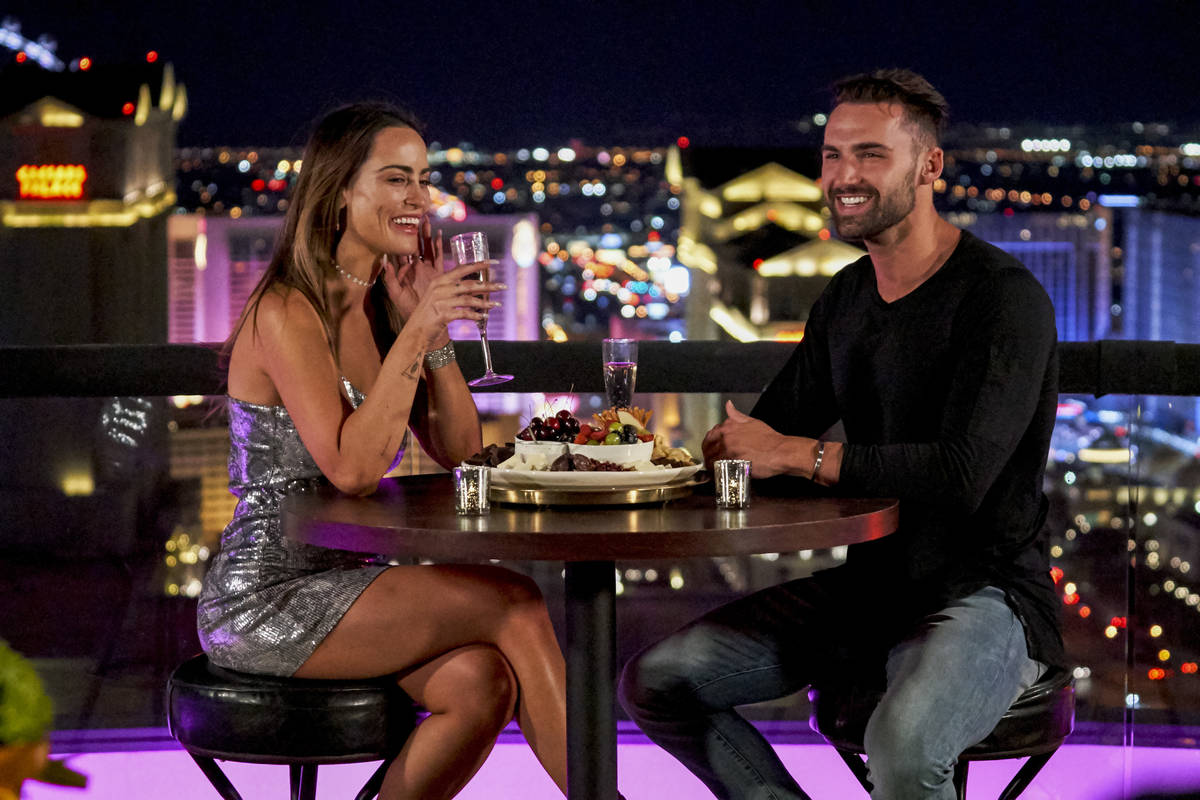 Lauren Coogan and Connor Trott appear in a scene from "Love Island." The dating series took over The Cromwell this summer. (Adam Torgerson/CBS Entertainment) 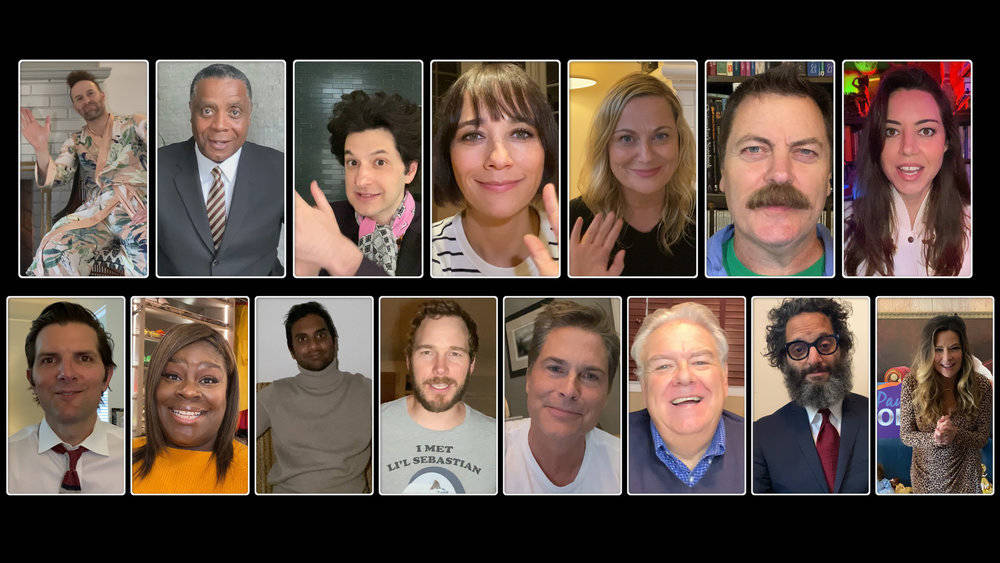 The cast of "Parks and Recreation" reunited remotely for a new episode of the series to raise money for Feeding America. (NBC)

There aren’t many new ways left to complain about 2020.

Perhaps the best thing that can be said about the year is this: It’s almost over.

As terrible as it was — honestly, the past 12 months were so nightmarishly awful, dumpster fires looked on with rueful admiration — there still were a few bright spots amid the doom and gloom.

1. “Some Good News.” John Krasinski’s homebound newscast ever so briefly gave viewers a reason to be hopeful during the early days of the pandemic.

2. Italians singing from their balconies. The videos were a beautiful beacon of hope, back when Italy was the scariest place you could imagine being during the outbreak.

3. “Hamilton” on Disney+. For everyone unlucky and/or broke enough to have missed the original cast onstage.

4. The angel who walks among us known as Dolly Parton. The country music icon kicked off the year by posting four photos, representing how she might present herself on different social media platforms, and inadvertently launched the Dolly Parton Challenge. In August, she expressed solidarity with the Black Lives Matter movement in an interview with Billboard: “And of course Black lives matter. Do we think our little white a—- are the only ones that matter? No!” And in November, she learned along with the rest of the world that she had helped fund Moderna’s COVID-19 vaccine.

Get you a woman who can do it all 😉 pic.twitter.com/sG4OHpVgxM

5. “The Last Dance.” The ESPN smash proved laughing, iPad-holding, “and I took that personally” Michael Jordan is the best Michael Jordan.

6. “The Queen’s Gambit.” You know you’ve stumbled onto something special when a series described as “a drug-addicted orphan in 1950s Kentucky becomes a chess prodigy” turns into a phenomenon.

7. All the TV and movie reunions. The casts of “Parks and Recreation,” “The West Wing,” “The Goonies,” “The Princess Bride,” “Veep,” “Community” and “Happy Days” — along with many, many others — reassembled for new episodes, virtual script reads and other shenanigans that raised money for nonprofits.

8. Talk shows from home. Jimmy Kimmel, Stephen Colbert, Jimmy Fallon, Seth Myers and others ushered in a more laid-back era of late night while offering viewers glimpses of how they, and their guests, live.

10. Bubble hockey. Despite the many obstacles, the 2020 NHL playoffs went off without a hitch — aside from the outcome of the Western Conference Finals.

11. “Ted Lasso.” The Apple TV+ comedy starring Jason Sudeikis as an American college football coach who takes the reins of an English Premier League soccer team offered up the perfect amount of heart for beleaguered viewers.

12. For many of us, pajama bottoms and sweatpants became the new Casual Friday — also Casual Tuesday, Casual Thursday, Casual Wednesday and, most crucially, Casual Monday.

13. We all became at least marginally better cooks.

15. “Borat Subsequent Moviefilm.” It’s basically the same premise as the 2006 original. We just needed it more this year.

16. “Tenet.” Hollywood and the nation’s movie theaters pinned their hopes of recovery on the massive Christopher Nolan spectacle. It didn’t pan out that way — when few moviegoers showed up, studios shoved most of their films back into storage — but it was a noble effort.

17. Hotels as backlots. While local resorts were either shuttered or at far less than normal capacity, ABC’s “Shark Tank,” CBS’ “Love Island” and MTV’s “Jersey Shore Family Reunion” moved in to provide the properties some much-needed cash and exposure.

19. Verzuz. Few (positive) things lit up social media quite like the online music battles — Alicia Keys vs. John Legend, for example, or Snoop Dogg vs. DMX — that sprang up on Instagram.

20. Despite how divided we are as a nation, people from all walks of life still managed to unite behind a 37-year-old from Idaho as he drank from a bottle of Ocean Spray while skateboarding to his job at a potato processing plant and vibing to Fleetwood Mac’s “Dreams.”