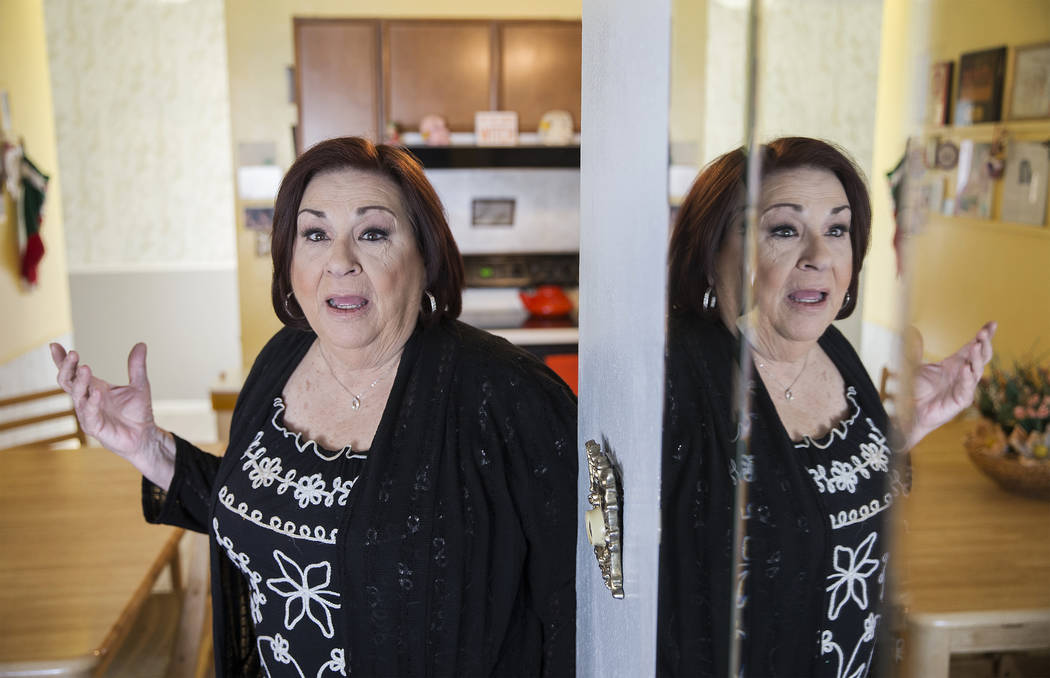 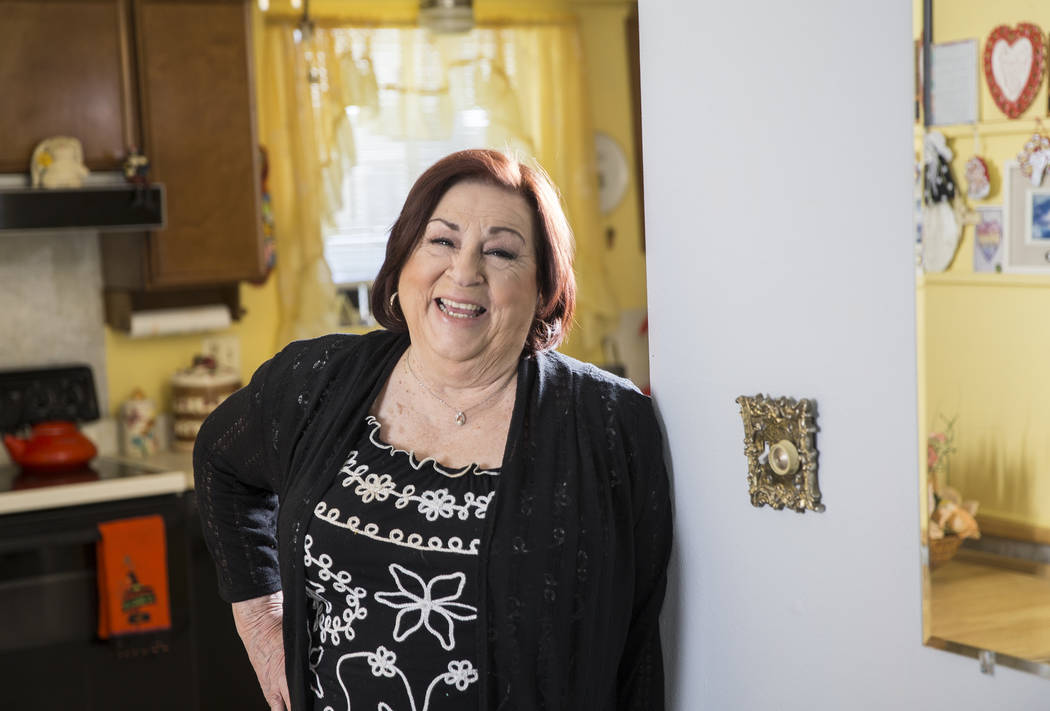 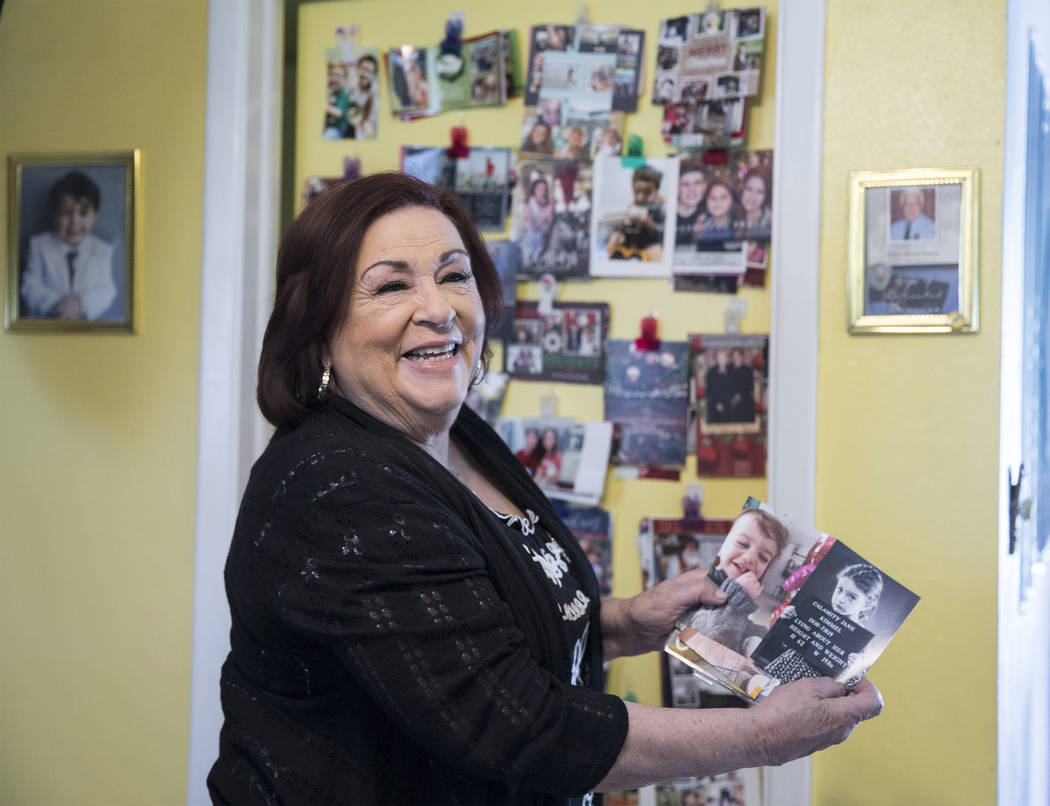 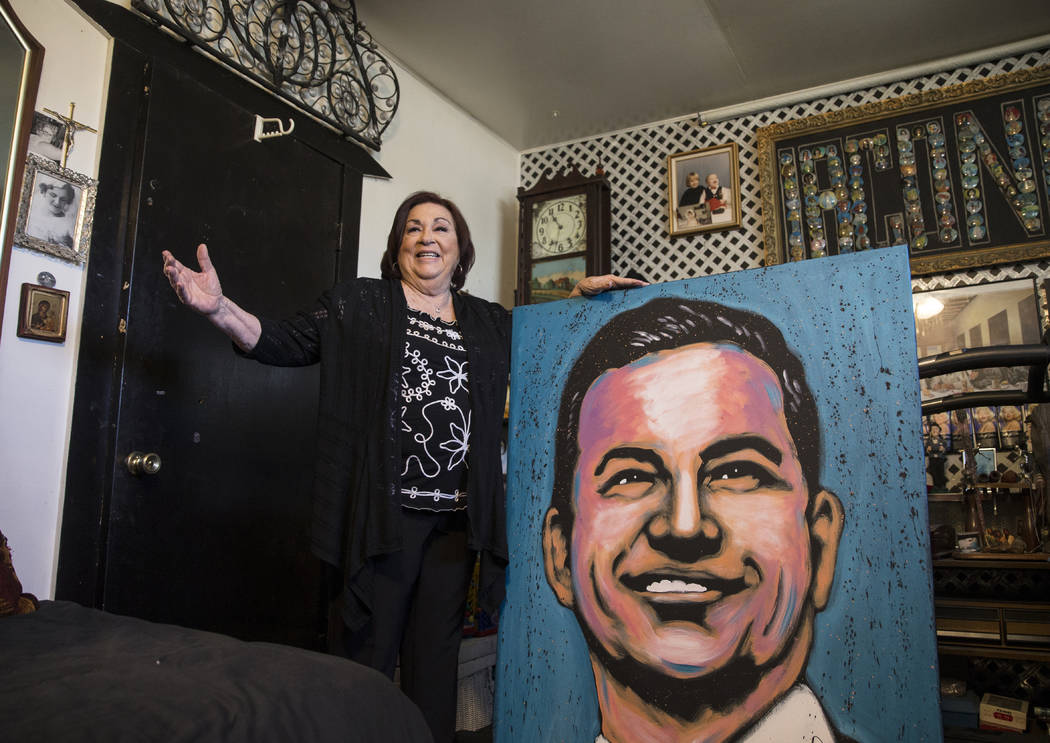 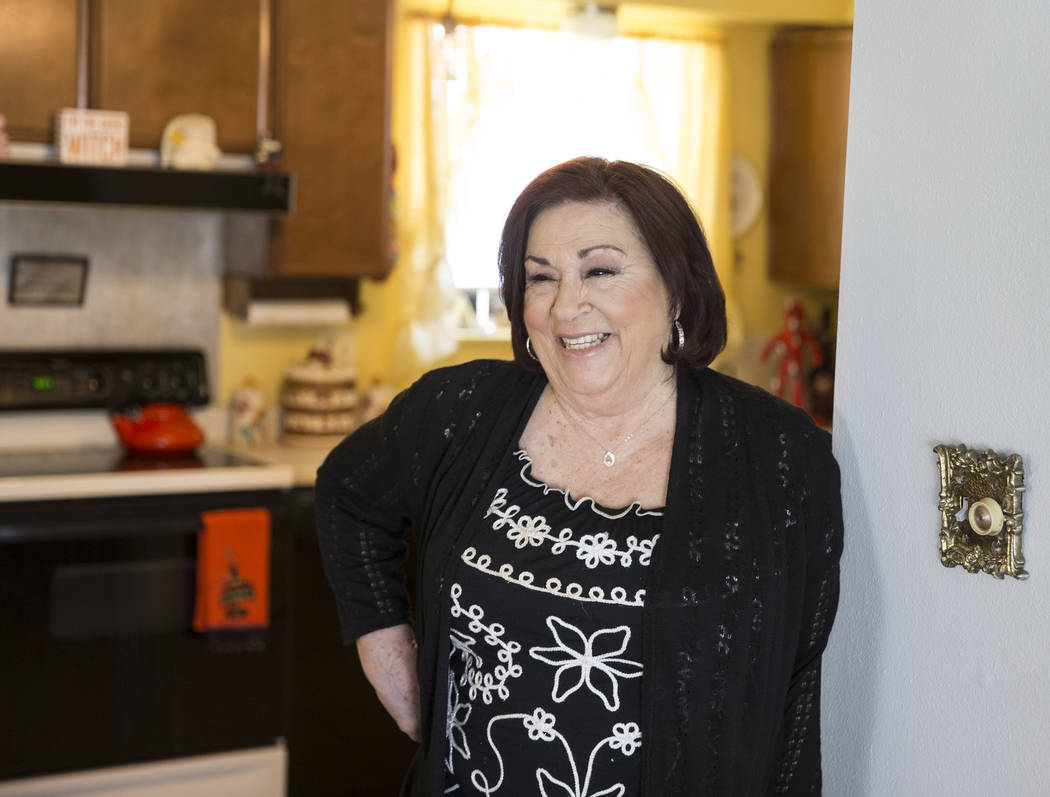 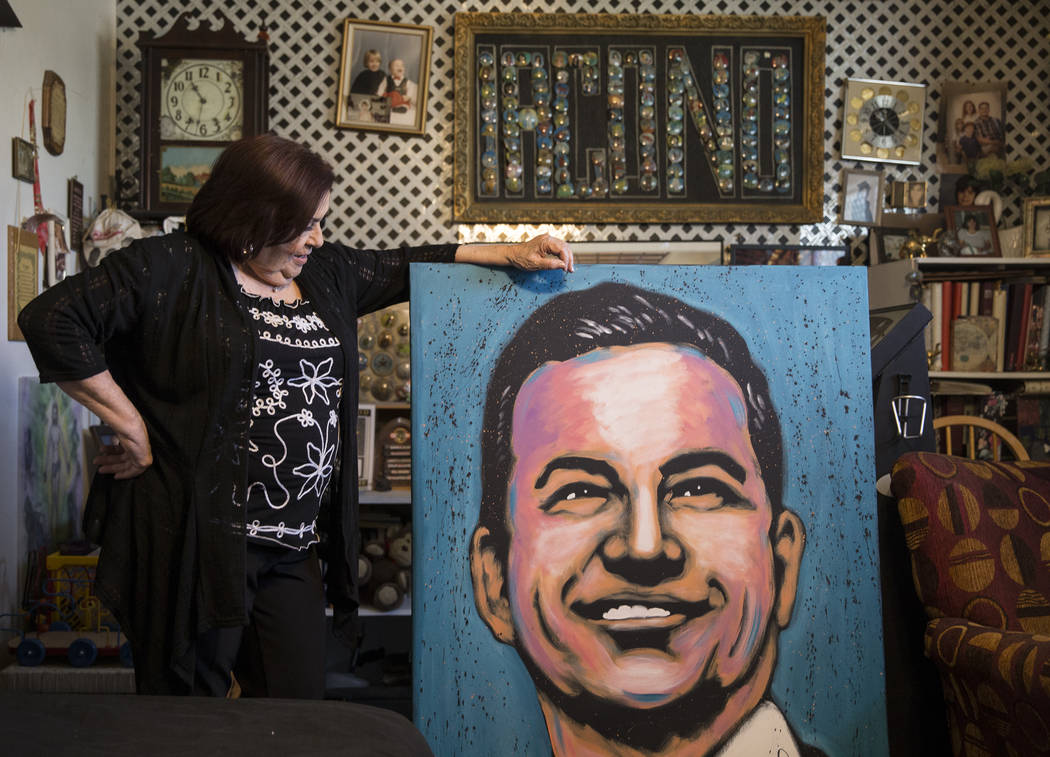 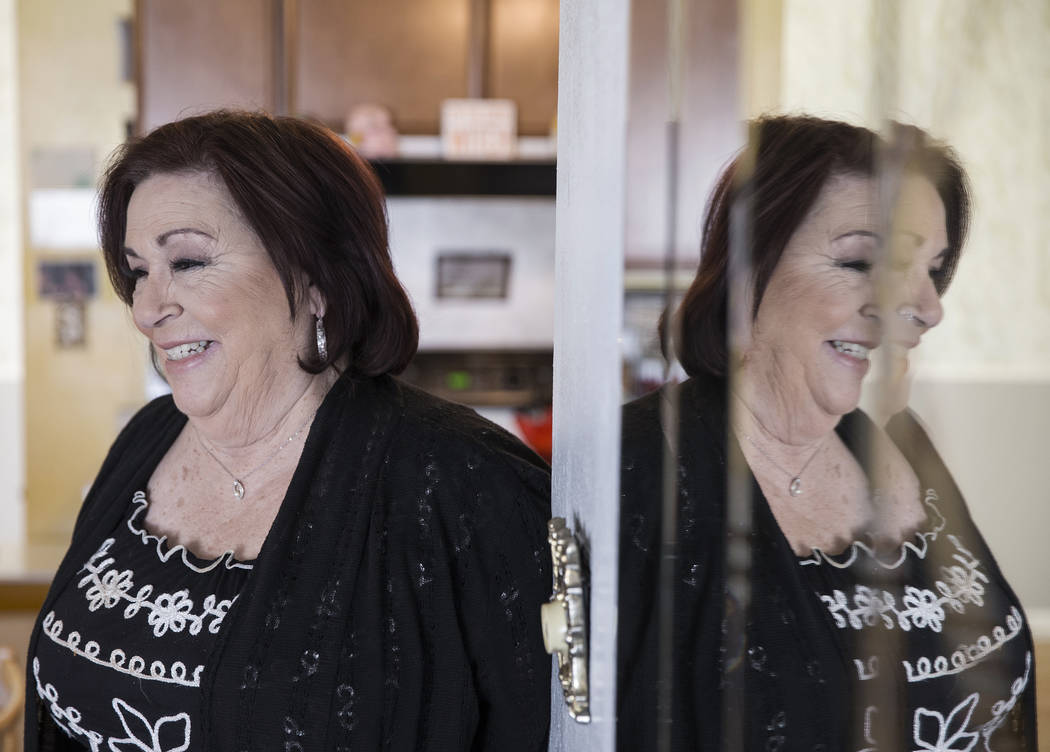 Her ceramics class has been interrupted by a pants-dropping lunatic. She once returned after a tiring day to discover her house had been painted orange and green. And she was convinced, ever so briefly, that she was watching her unborn grandson do jumping jacks and flip her the bird in a sonogram.

Concetta Potenza has been on the receiving end of so many pranks by her nephew, Jimmy Kimmel, that she doesn’t know when or where he’ll strike next.

“Nothing is sacred,” says the longtime Las Vegan known to Kimmel’s viewers as Aunt Chippy. “If Jimmy comes to my house, I will check every single room for microphones, hidden cameras or whatever. And I make sure I go to bed fully dressed with makeup on.”

She’ll need to be extra vigilant, as Kimmel is taping his late-night show at Planet Hollywood Resort for the next week.

Potenza, her late former husband, Frank, and their three daughters moved to Las Vegas in 1975 after he retired from the NYPD. Frank thought New York girls were “too tough,” she recalls, and didn’t want theirs — Ann, Sally and Micki — turning out that way.

Security jobs were plentiful here and safer, too. The only similar work he could find in New York was in banks that were constantly being robbed.

As a Christmas present that first year, Frank brought her sister Joan Kimmel, brother-in-law Jim and their kids, Jimmy and Jill, to visit them in Las Vegas. Jim’s asthma gave him trouble at home in Brooklyn, she says, but he never felt better than he did in the valley.

A little over a year later, the Kimmels packed up and moved across the country, settling three miles down the road from the Potenzas.

Her life would never be the same.

“He’s a little demented I think,” the brassy 79-year-old jokes about Kimmel. “I think there’s something that happened in his head.”

Growing up, he was always trying to get a reaction out of the members of his large extended family. His mother would just frown. Potenza’s sister-in-law, the mother of Kimmel’s frequent co-conspirator “Cousin Sal” Iacona, would end up crying. “I’m the only one with the big mouth that would start screamin’ at him, ‘You moron! I can’t believe you’re doin’ this!’ So I became the patsy.”

When Kimmel was 15, Potenza found a pack of cigarettes at his house. She was convinced she was preventing him from smoking and scoring a free pack of smokes in the process. “I’m thinkin’ I finally got this little jerk,” she recalls.

The next time her boss called her into his office, she lit one of those cigarettes — because that’s what people did back in the ’80s.

It exploded all over her boss and his desk. Moments later, there was another loud bang when a co-worker bummed one of her smokes. From that day on, Potenza was banned from bringing cigarettes to work if they’d ever been in her sister’s home.

That wasn’t the last of the exploding cigarettes, though.

“It has happened in casinos, where I was sittin’ at a slot machine, and it blew up,” she says. “The woman on the right dove to the floor like somebody shot her.”

It doesn’t take long to see why Kimmel is so amused by the quick-tempered woman he’s lovingly referred to on air as being “as sweet as a shot glass full of gasoline.”

Ask what she did to her poor nephew as a child that makes him treat her that way, and she’ll punch your ticket for the Aunt Chippy Experience.

“I didn’t do (expletive) to him! I did nothing to him! He’s my godchild. I baptized that little bastuhd! He should be very nice to me!”

At times, you’d swear you could hear her full-throated screams all the way back in Brooklyn.

“The rawness is the funny part,” youngest daughter Micki Marseglia says of her mother’s appeal. “But you can also tell that there’s a good heart in there, too.”

Marseglia, who serves as the show’s talent relations director, says she’s “always in cahoots” with Kimmel when it comes to setting up the pranks on her mother. That’s her — and her belly — in the sonogram bit.

“For me to see her going through this at this time in her life, I’m happy for her. Because I think it also makes her feel appreciated,” she says of her mother. “Jimmy’s looking at her and seeing that there’s something special there, even if it’s screaming and getting mad.”

Just as he’d employed his Uncle Frank as a comedic foil, having him stand to the edge of the “Jimmy Kimmel Live!” stage as the show’s security guard, Kimmel has deployed his Aunt Chippy as a special correspondent.

Her first assignment, interviewing spring breakers at Arizona’s Lake Havasu, left her mortified at the thought of her daughters’ college experiences.

She regularly reviews some of the wilder designs unveiled at New York Fashion Week, has hosted a recurring feature called “Chip’s Tips” and once played blackjack at The Cosmopolitan of Las Vegas with Kimmel’s pretend nemesis, Matt Damon. “If I knew he was gonna be here, I would’ve shaved my legs, Jimmy,” she exclaimed during the live remote.

Mostly, though, she’s on the receiving end of her delighted nephew’s seemingly infinite supply of pranks that, after their TV debut, are housed on the show’s YouTube channel for its 13 million subscribers.

Lest any of this be mistaken for elder abuse, it’s all in good fun.

“Not a Mother’s Day goes by that I don’t get a phone call and flowers,” Potenza insists. “Not a birthday goes by that he ever forgets to call me. And a gift, always.”

When she has health troubles, he calls right away.

“That’s the serious part. The important things. Gettin’ me crazy is, like, ‘Hey, if everybody can laugh at it, so what? She’ll get over it.’ ”

There’s a sweet hilariousness to their relationship that extends to the framed photo of Kimmel and Molly McNearney from their 2013 wedding that sits on a living room table.

She had to purchase it from a newsstand.

“Yeah, I get mad. I get crazy. Because that’s my personality. I’ll get crazy with anybody,” Potenza declares. “But there’s no meanness in Jimmy. He’s not out to be mean. He’s out for a laugh. He’ll do anything for a laugh or a joke, but not anything that would hurt your heart.

“He’ll hurt your body,” she says, laughing about some of the pranks he’s pulled on others, “but not your heart.”