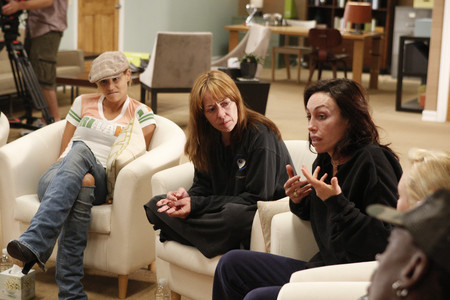 It must have been sneaked onto the air by some conscientious VH1 employee while everyone else at the channel was busy scouring the country for fading celebrities and dozens of young women, with little more than daddy issues and a dream, willing to have sex with them.

“Celebrity Rehab with Dr. Drew” (10 p.m. Thursday, VH1) stands out like a beacon of sanity, preaching sobriety on a channel known for reality contestants who drink so much that when they cry — and they always end up crying — their tears could peel the paint off the walls.

Even so, “Celebrity Rehab” can’t help but feel a little exploitative. Participants lay themselves bare, exposing their innermost demons for viewers’ entertainment. And what besides ratings could be gained from putting Heidi Fleiss in the same room with Tom Sizemore, who went to jail for abusing her?

While she clearly hasn’t forgiven Sizemore, the “Hollywood Madam”-turned-Pahrump laundromat owner says she didn’t let her ex’s presence distract her from her goal.

“I said it doesn’t matter who’s on the show with me,” she recalls. “It’s all about me and getting better.”

Rare is the room in which Fleiss is only the fourth or fifth most controversial person. But you’d need an ophthalmologist after all the eye-rolling caused by her fellow rehabbers’ bad behavior.

In the months since they taped this season, Mackenzie Phillips came forward with claims of an incestuous relationship with her father, “Papa” John Phillips; former Miss United States Teen Kari Ann Peniche turned up with Rebecca Gayheart and “Grey’s Anatomy’s” Eric “McSteamy” Dane in a naked video that she says was stolen by a fellow cast member, country singer Mindy McCready; and McCready countered with allegations that Peniche worked as both a madam and high-end prostitute.

Then there’s Dennis Rodman, who went from “The Celebrity Apprentice” to “Celebrity Rehab” in a year, mumbling and slurring — to the point he has to be subtitled — about how he doesn’t have a drug or alcohol problem and shouldn’t even be at the Pasadena Recovery Center.

At times, Fleiss says she, too, wondered what she was doing there, but for a different reason.

“This is kind of how I thought: ‘How did I get on this show with all these famous people? What am I doing here?’ Look, I’m not a singer, I’m not a dancer, I’m not an athlete. I’ve only been on, what, a news channel? People only know me because of the nature of my arrest.”

Unless you spend your days euthanizing puppies or running the projector at an all-“Schindler’s List” revival house, “Celebrity Rehab” is by no means feel-good TV.

Former Alice in Chains bassist Mike Starr shows up with an oozing hole in his side from skin-popping, Phillips talks about having blood stains on her ceiling from shooting up, and Lisa D’Amato of “America’s Next Top Model” reveals that she was sexually abused by her mother’s boyfriends beginning when she was in the third grade.

Although aside from Rodman — and, possibly, Sizemore and Peniche, who don’t turn up in Thursday’s premiere — everyone involved seems grateful for the show’s help.

Despite revealing that she’d used meth just before checking in, Fleiss seems in good spirits as she flirts with Dr. Drew while he takes her medical history. “You’re gonna fix me, right?” she asks, hopefully, in her girlish, sing-song cadence, before admitting that fixing her would be “a tall order.”

“I won’t watch that show, ever. I was detoxing off drugs. I don’t think I left my bed for four days,” she says, adding that she’d scare herself by seeing the condition she was in. “I’m glad I did it though,” she continues. “It was a great experience, a really good experience for me.”

I have no real attachment to Fleiss other than owning a pair of her underwear — relax, it’s just boxers from her Heidi Wear line — and I’m generally one of the more cynical people around. But for some reason, I’m rooting for her, and I truly hope she gets better.

And while she admits that staying clean is still a struggle, she sounds like she’s well on her way.

“Drugs are out,” she adds. “The Rolling Stones don’t even get high anymore.”