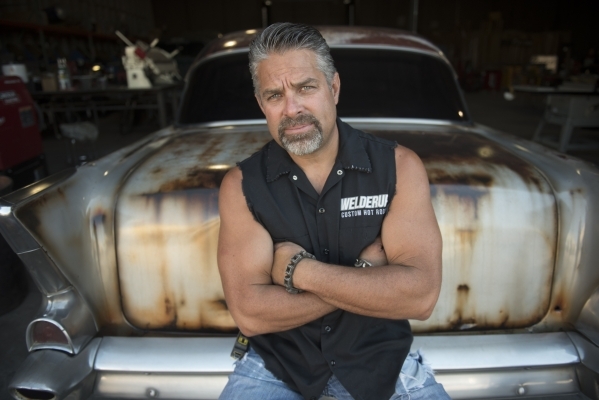 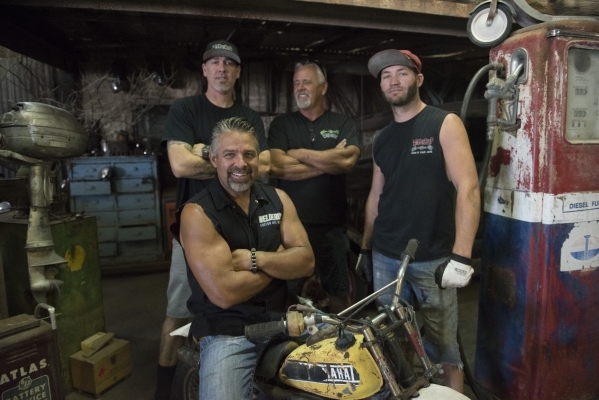 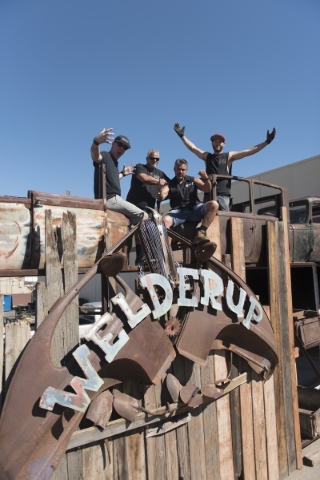 If you were to lead a locations tour of Las Vegas’ custom car reality shows, you wouldn’t need to use a bus.

You could practically do it on pogo sticks.

Darnell insists there’s no rivalry between the neighboring shows. Of course, it helps that the companies aren’t exactly fighting over the same customers.

“If you want something that’s definitely got … a bitchin’ paint job and a crazy-looking interior, then Danny’s the guy,” Darnell says. “But if you want something fabricated, raw, hard-core, like, you get in this thing and you wanna feel like a badass,” seek out Welderup.

Rather than take a beat-up car and make it look pristine, the Welderup crew will accentuate the wear and tear while Frankenstein-ing the rest. In Monday’s second-season premiere, a Montana pharmacist brings them the shell of a 1957 Chevy station wagon. After adding a C4 Corvette suspension, air conditioning and other modern luxuries, what they give him is basically a brand new station wagon. It’s an everyday car that looks like it belongs in a museum.

More importantly, Darnell says they gave the family man a new attitude. “They didn’t put it on camera, but he’s, like, ‘Steve, when this is over, I’m gonna take my wife out in this car and throw her in the back seat, and I’m gonna have fun with her.’ And this guy probably hasn’t done that with his wife in frickin’ 25 years. It brings out kind of that bad-boy feeling.”

“At this point, right now, it’s not like I’m a billionaire,” he says. “You don’t make money at this (expletive) for a while. But you’re growing so fast that you have to cover all your bases. So now, because you’re on TV, your insurance has doubled or tripled or quadrupled. … I’m in growing pains is all I can say. And it’s really confusing and hard to accommodate everything.”

Darnell gives credit to his Welderup crew, especially Dan Coggins, his mentor and head mechanic, as well as fabricators Travis Deeter and Justin Kramer. The latter is his ex-brother-in-law. Darnell says he kept him in the divorce.

“I definitely could not produce what I do without them. … I can’t really thank ’em enough, even though they piss me off half the time.”

But despite their skills, Darnell remains heavily involved in every build, which only adds to the pressures of running an ever-growing business.

“These are very one-of-a-kind, unique, artistically put-together vehicles. And they’re time-consuming. … I’m not one of those people on car shows that delegates jobs to people. I’m the guy. I’m the one building it. I’m the one that’s creating and doing all the unique things on them. It’s hard to make a business out of that because I’m basically a starving artist.”

At least the reality show is running smoother this season.

“Vegas Rat Rods” is a north-of-the-border production that originates on Discovery Channel Canada. After acquiring the first season, Discovery U.S. stepped in this year and made some improvements.

“I think that this year is definitely going to be better,” Darnell says. “We shot it so guerrilla-style the year before, I don’t even know how we made it. It was on no budget. We didn’t make no money. It was horrible. We were working 18 hours a day, seven days a week for months on end. This year wasn’t as bad, but I didn’t walk out of here (after) less than a 15-hour day probably for seven months. I think I took maybe two days off.”

If it’s a car for himself or one of the rare jobs he accepts that isn’t for TV — he figures he turns down 15 to 20 requests a week — Darnell will spend three months working on it, often alone. When “Vegas Rat Rods” is filming, though, it’s all hands on deck.

“You have to do so much (research and development), fabrication and geometry. And things don’t work, and you gotta take it out and do it again. Basically, what we’re doing is, we’re doing the impossible. … The guys locked in their office at General Motors, they spend three weeks designing a steering wheel. Well, we build a whole frickin’ car in 12 days.”

Darnell has opened up a showroom at Welderup, 3160 S. Highland Drive, that is open seven days a week so fans, or the simply curious, can get a feel for some of his work. For now, there’s still plenty of misunderstanding. One of the most common things he hears about his cars: “Are you gonna paint that? That’s gonna be cool when you paint it.”

All he can do is shake his head.

“People are so stuck in the ’²90s, they think everything’s gotta have a flame job on it.”

Darnell, though, sees the perfection in imperfections.

“I think of it, like, this car’s taken 80 years to look this good. Why would you change it? I think there’s something to be said about the life that you’ve lived and the dents and the scratches and the kids that were conceived in the back seat. There’s so much to be said about something, and when you cover it up with paint, you just buried all those cool stories.”