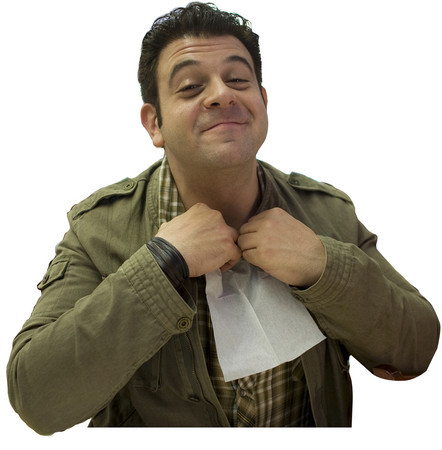 The cable landscape can be confusing for even the savviest of viewers.

After all, it’s a place where Denise Richards and Hulk Hogan still are relevant.

Where one day you’re watching the Sci Fi Channel and the next it’s Syfy, which looks less like the home of “Battlestar Galactica” than the call letters of an Eastern European Top 40 station.

And it’s where “Man v. Food” (10 p.m. Wednesdays), a celebration of all things edible, airs on the Travel Channel but the travelogue “Chefs vs. City” (10 p.m. Fridays) is on the Food Network.

Adding to the confusion: Both shows visit Las Vegas this week.

On “Chefs vs. City,” two-person teams — Food Network chefs Chris Cosentino and Aaron Sanchez take on Seablue’s executive chef Stephen Hopcraft and executive pastry chef Santanna Salas — have to hurriedly eat 100 bite-sized versions of Bellagio buffet items ranging from pickled ginger to smoked duck with St. Andre croustade and pecan caramel to items that have a dazed Salas wondering, “What is all of this?”

On “Man v. Food,” host Adam Richman, the gregarious new face of the Travel Channel, just has to sit back and try to down a 6-pound burrito.

And while “Chefs vs. City” is full of “Amazing Race”-style tasks that send the teams tearing through Minus 5? Ice Lounge, BLT Burger and Shibuya like a bunch of maniacs, “Man v. Food” lets Richman take his time as he gets a behind-the-scenes look at Hot N Juicy Crawfish and watches in mouth-watering awe as the fried chicken eggs Benedict — griddled mash, fried pasta, buttermilk biscuit, tomatoes, spinach, bacon, half-pound fried chicken breast, scrambled eggs, grilled cheese and chipotle sauce — is assembled at Hash House A Go Go.

“I love that place. I need you to put that in writing,” Richman says by phone from his Brooklyn home. “I love Hash House A Go Go.”

But the siren song that lured him to Las Vegas came from the NASCAR Cafe’s Big Badass Burrito. It’s 6 pounds, 2 feet long, and somewhere north of 5,000 calories. And it’s garnered more attention for the Sahara than anything since it was robbed by the Rat Pack in the original “Ocean’s Eleven.”

Richman isn’t a competitive eater. He’s just a regular guy who loves food and travels the country eating giant portions of it. Wherever there’s a 12-egg chili omelet, he’ll be there. If you’ve got a 32-inch, 11-pound pizza, he’ll be there, too. And if your menu offers a 5-pound burger with 20 slices of cheese, 20 slices of bacon, a giant pickle and 5 pounds of fries, he’ll be there, but he might pass up most of the fries.

So what does one do to prepare to eat a 6-pound burrito? “Prayer helps,” Richman says, adding that he works out “like a warrior” the night before a challenge. “I stay very, very hydrated, because you have to assume that with beef and all those sauces, there’s a decent amount of salt.”

In the episode, the likable Richman — think a beefier Fred Savage, although one who somehow weighs less than he did last season — attempts to become just the third person at the time to finish the burrito in less than 90 minutes. If he’s successful, he gets lifetime access to the Sahara’s roller coaster, which he takes for a spin. Before the burrito, that is. After all, the show’s called “Man v. Food” not “Food v. Sidewalk.”

But more impressive than eating a couple of days’ worth of food in one sitting is what happened after. Rather than napping for an hour or two — or, more realistically, throughout the winter — Richman hit the treadmill.

“Being sedentary is incredibly uncomfortable. It’s incredibly detrimental to your health,” he says of his post-gorging ritual. “And actually, I have to say that despite the fact that the first 10 minutes or 15 minutes on the treadmill might suck, it actually does alleviate a lot of pressure, and you feel better.”

What really puts the “man” in Richman, though, is that rather than “succumb to the starchy wonderfulness of it all,” as he puts it, he went out that night and hit the town. He’s a little vague on the details, but you can’t help but think the man lives as large as he eats.