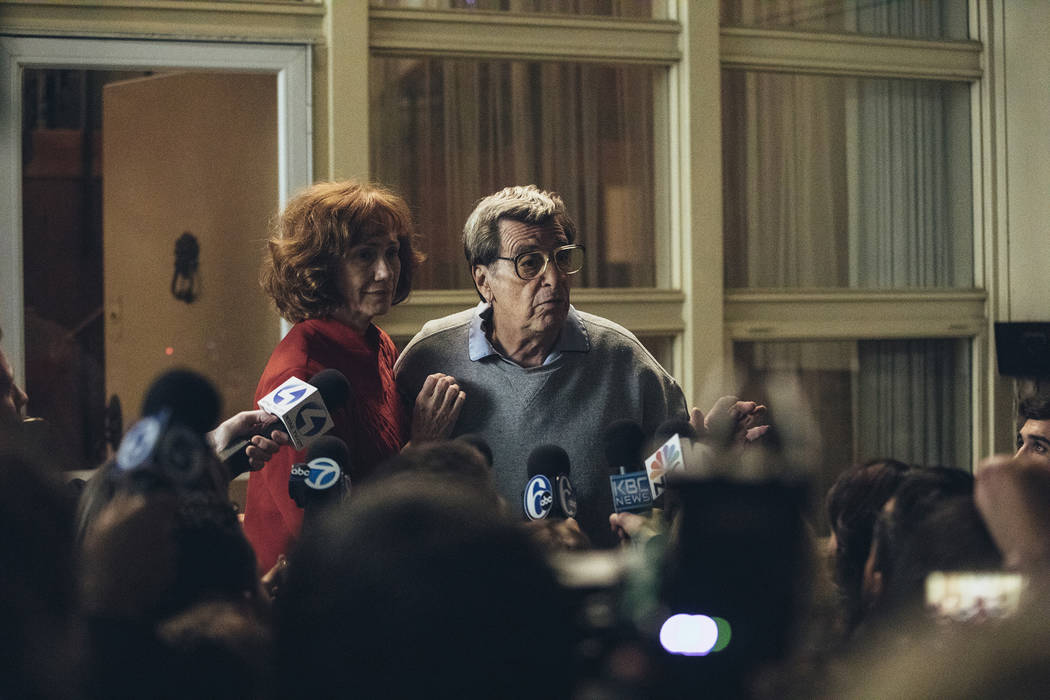 Kathy Baker and Al Pacino in a scene from "Paterno," which debuts Saturday on HBO. (Atsushi Nishijima/HBO)

I like college football as much as the next guy — provided that the next guy wasn’t a Penn State fan in 2011.

As presented in “Paterno” (8 p.m. Saturday, HBO), Happy Valley, the nickname for the area surrounding the university, comes off like an oxymoron as students and townsfolk react with increasing levels of rage to developments in the sexual abuse scandal engulfing the football team.

With coach Joe Paterno (Al Pacino) and his family sequestered in their home, their front lawn is besieged by dozens of students and members of the media. Son Scott (Greg Grunberg), an attorney, goes out to address them and implore them also to think about the young boys former assistant coach Jerry Sandusky ultimately would be convicted of raping.

Each time Scott tries to mention the children, he’s shouted down by chants of “Joe Pa-ter-no!”

When Paterno is eventually fired for his involvement — or lack thereof — in the scandal, city streets become a mob scene. Police turn out in riot gear. Sara Ganim (Riley Keough), who first reported the Sandusky allegations for The Patriot-News in Harrisburg, talks to a young woman caught up in the bedlam who thinks Paterno should be in jail. “Can I maybe quote you on that?” she asks. “No! I don’t wanna get (expletive) killed in my bed!” Eventually the masses begin chanting “(Expletive) the media!”

With director Barry Levinson and Pacino teaming for an HBO movie, no one could have expected a hagiography. After all, Levinson’s HBO track record includes directing Pacino as Jack Kevorkian in 2010’s “You Don’t Know Jack”; executive producing Pacino’s turn as the music mogul turned murderer in 2013’s “Phil Spector”; and directing Robert De Niro as Bernie Madoff in 2017’s “The Wizard of Lies.”

“Paterno,” though, doesn’t portray its subject as the heavy — more like heavily out of touch.

Paterno refuses to so much as glance at the list of Sandusky charges.

“They indictin’ me?” he asks Scott. Told that they aren’t, he responds with a dismissive, “So?”

Joe’s wife, Sue (Kathy Baker), eventually takes in count after nauseating count before heading straight to the bathroom to vomit.

Aaron Fisher (Benjamin Cook) similarly wants nothing to do with the list of charges. That’s because he’s the young man referred to as “Victim 1.”

“I don’t want you to read it,” Aaron begs his mother. “Everything’s on there.”

“It’s on the computer, Aaron,” she responds. “Your mother can’t be the only person in the country not to read it.”

Through Aaron, and Ganim’s “Spotlight”-style reporting, “Paterno” finally puts a human face on the Sandusky atrocities.

Aaron is shown crying when a social worker calls to tell him the charges are about to become public.

He can no longer sleep in a bed after the abuse he suffered at the hands of the serial predator. Instead, each night, Aaron curls up on a small couch where he can ensure he’ll be alone.

Paterno, whom Pacino plays as sort of a withered Ray Romano, isn’t the villain of the piece. That’s clearly Sandusky, who rarely appears onscreen.

But the fact that the coach once lovingly known as JoePa allowed Sandusky, who retired in 1999, to remain close to his program with access to the team facilities where much of the sexual abuse took place, when Paterno knew about the allegations at least as far back as 1998, is unconscionable.

His final days on campus amounted to one of the saddest ends to any career in sports.

Pacino portrays Paterno, whose mantra has become, “It’s got nothing to do with me,” as a man filled with nearly as much confusion as remorse.

After dictating a statement expressing his sympathies to the victims, Paterno declares, “Release that. That’s the end of it. I have practice.”

Thankfully it wasn’t the end of it.