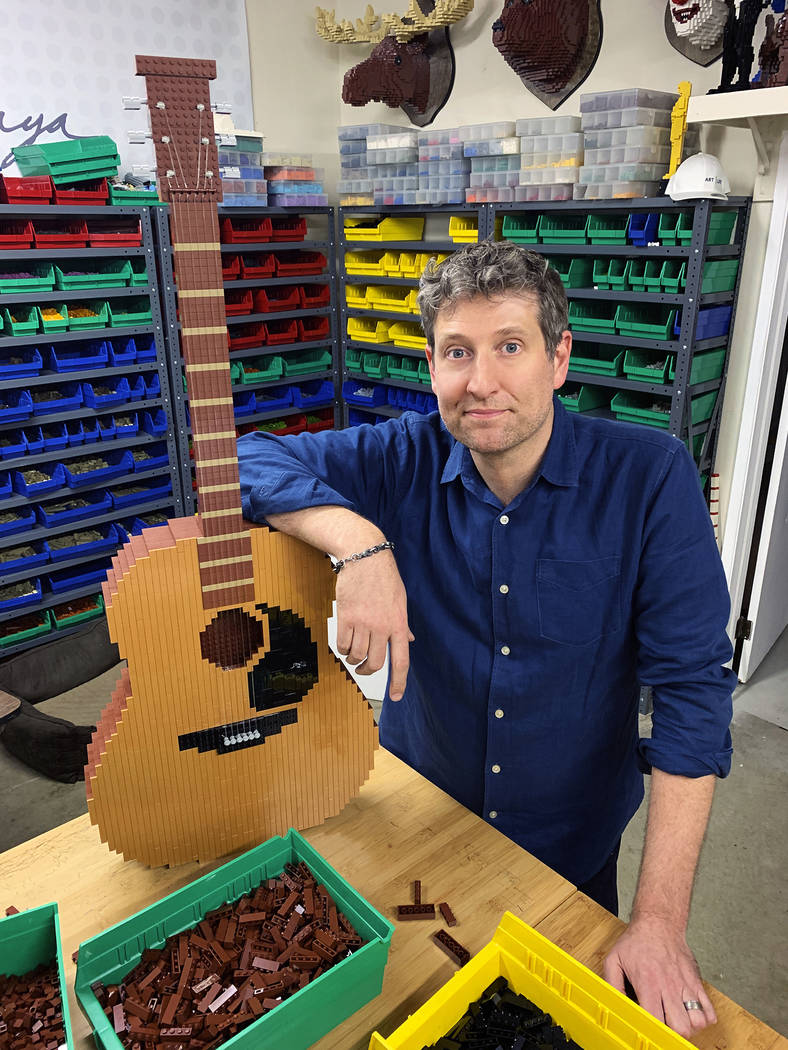 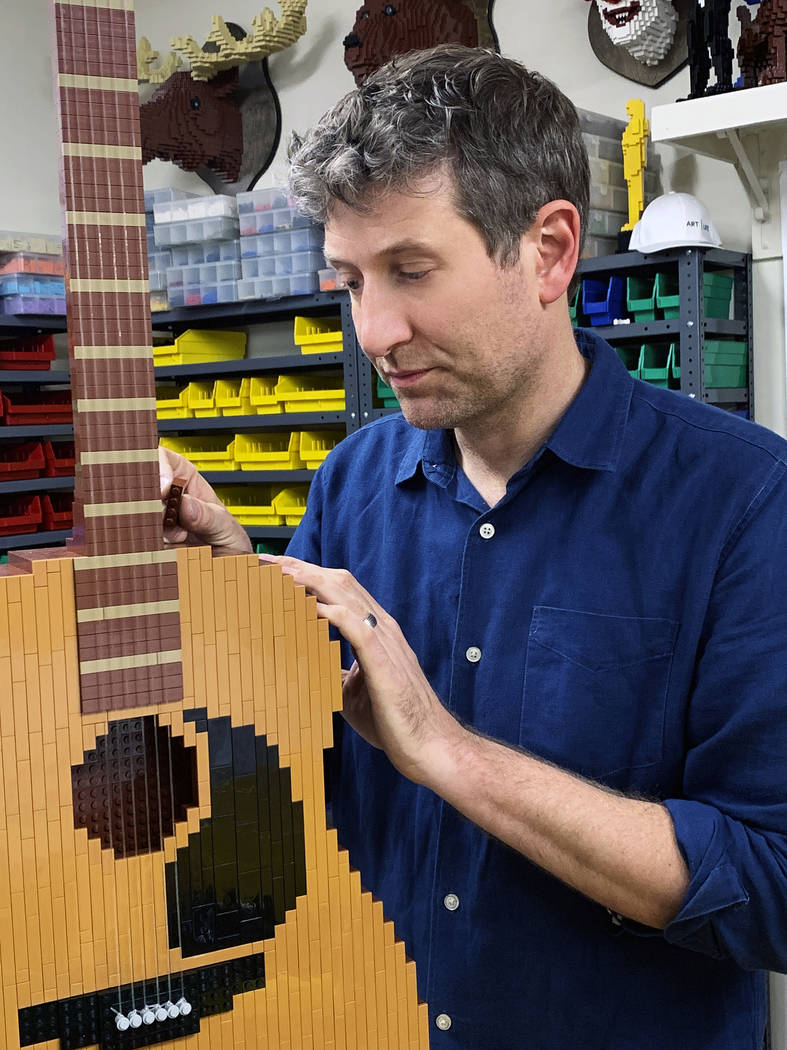 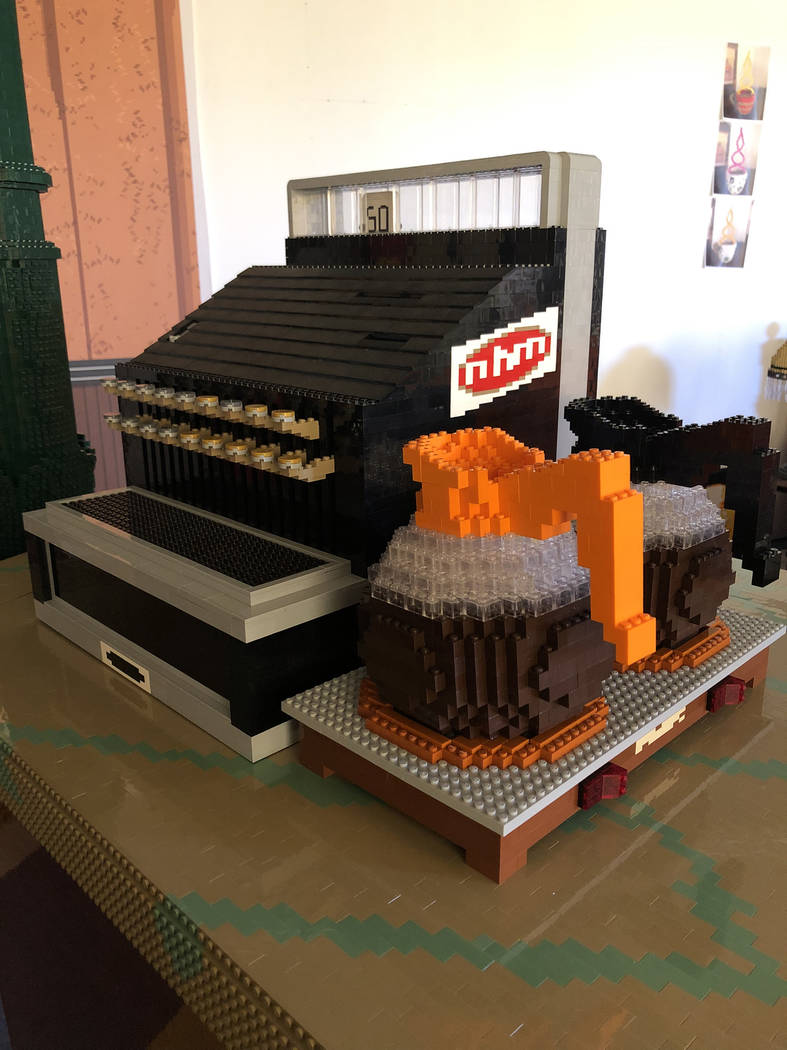 A full-size cash register and coffee pots are included in the Lego Central Perk. (Nathan Sawaya) 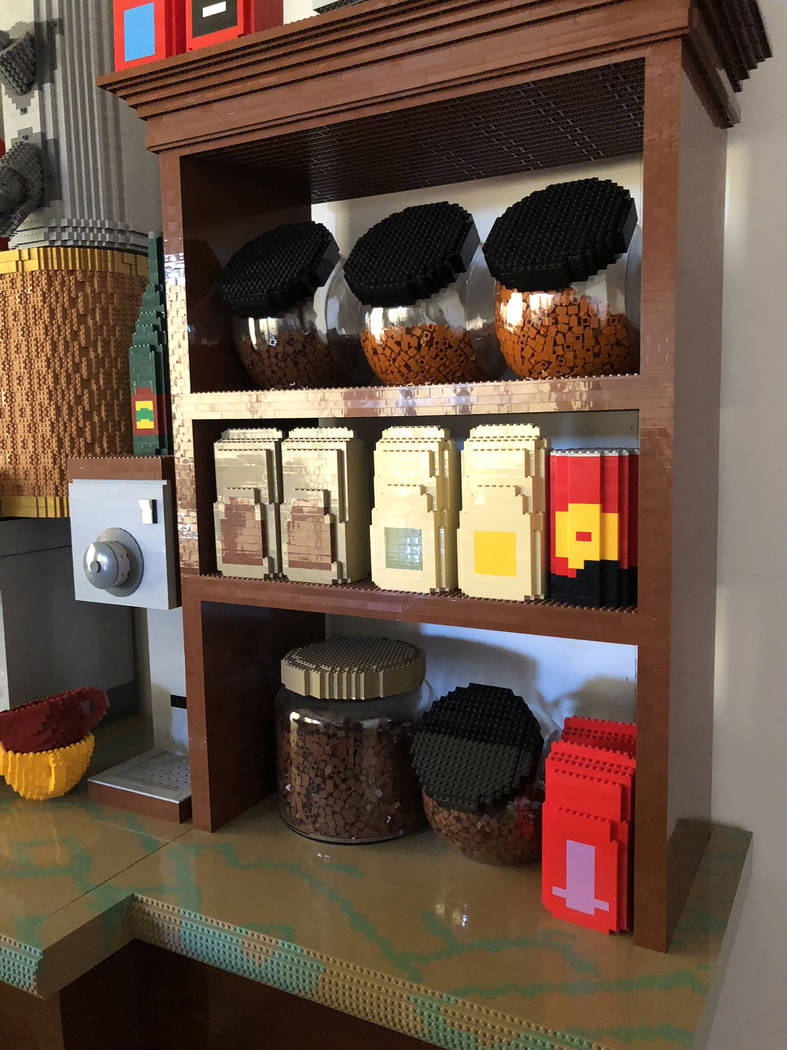 There’s attention to detail, then there’s whatever Nathan Sawaya was blessed with.

As part of Saturday’s “Friends” Fan Experience at New York-New York, the artist will debut his life-size, 700-square-foot re-creation of the show’s Central Perk coffee shop that’s constructed entirely out of Lego bricks.

“Taking on the idea of building an entire set, an entire room — not just any room, an iconic room known the world over — has been a real challenge,” Sawaya says, in one of the week’s great understatements.

This weekend’s extravaganza, part of the ongoing celebration of the sitcom’s 25th anniversary, also will include The Rembrandts performing their hit theme song, trivia with Gunther actor James Michael Tyler and appearances by the monkey that played Marcel.

For the most labor-intensive attraction, Warner Bros. gave Sawaya, the acclaimed mastermind behind “The Art of the Brick,” access to original props from the show so he could collect as many real-world measurements as possible.

“We looked at a lot of images, a lot of photographs that we could find online,” he says of the additional research. “Then we just watched a lot of ‘Friends’ episodes.”

Sawaya and fellow builder Brandon Griffith spent more than four months of 10-hour days in his Los Angeles studio, piecing together the set, brick by brick.

“As we’re building, we’re actually gluing each individual brick into place. It’s a slow process, requires a bit of patience. If we make a mistake, we have to use a hammer and chisel to take it apart once the glue has set.”

The show’s famed orange couch is included, in brick form. But so are less obvious touches, such as the bags of coffee beans behind the counter.

“Some things that the audience may have never even known was part of Central Perk, we still put it in there to be true to the original set,” Sawaya reveals. “Certain details like the ‘Reserved’ sign on the coffee table, that’s something that, even though it’s a small detail, fans will probably remember. But do they remember the type of lamp that was in the very back near the restroom? Well, that’s there, too. It’s hopefully that kind of detail that really brings the fan in.”

Unlike the human figures for which Sawaya is best known, his Central Perk work included an additional degree of difficulty.

“The whole idea is that we made this furniture so that people can actually sit on it. These barstools can be sat upon — people can lean on the bar, they can sit on the couch — which requires a different type of building. A little more engineering goes into it to make sure, ‘OK, not only does it have to look right, it’s gotta be able to support a person.’ ”

So what does it feel like to sit on a Lego couch?

“It’s a little bumpy,” Sawaya admits. “You know, it’s actually fairly comfortable. You think, ‘Oh, there’s thousands of these little bumps. What’s that going to feel like?’ But once you sit down on it, you really don’t notice them.”

Still, he isn’t expecting anyone, even the biggest “Friends” fan, to camp out all day on that sofa, as the show’s characters always seemed to do.

“You know, if that’s something they wanna try,” Sawaya says, his words trailing off in a way that seems to imply “please don’t.”