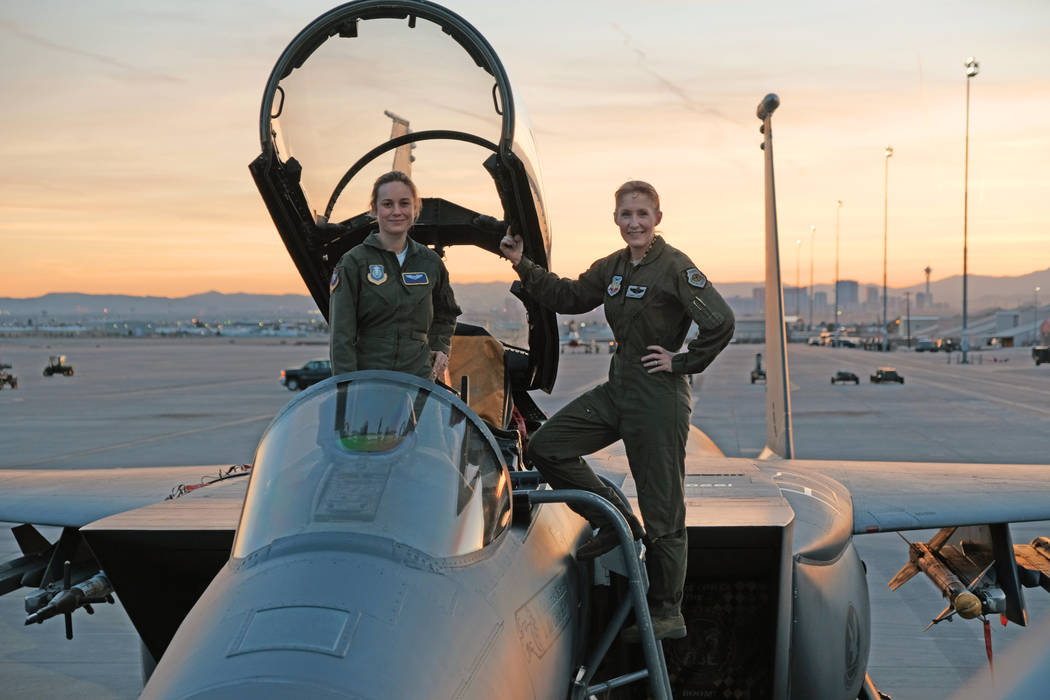 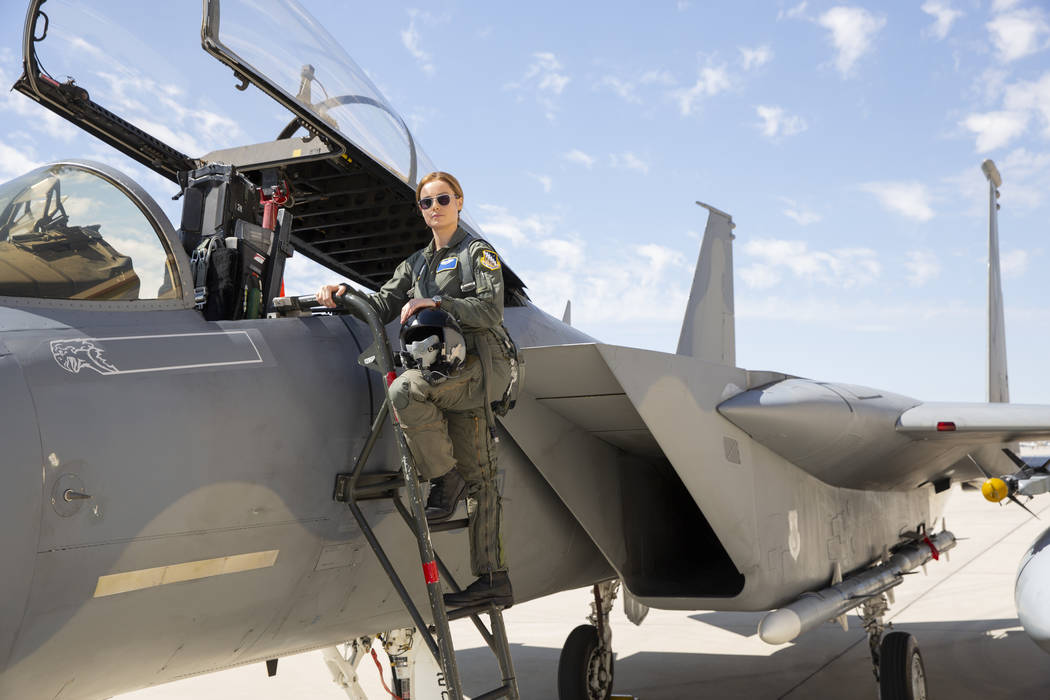 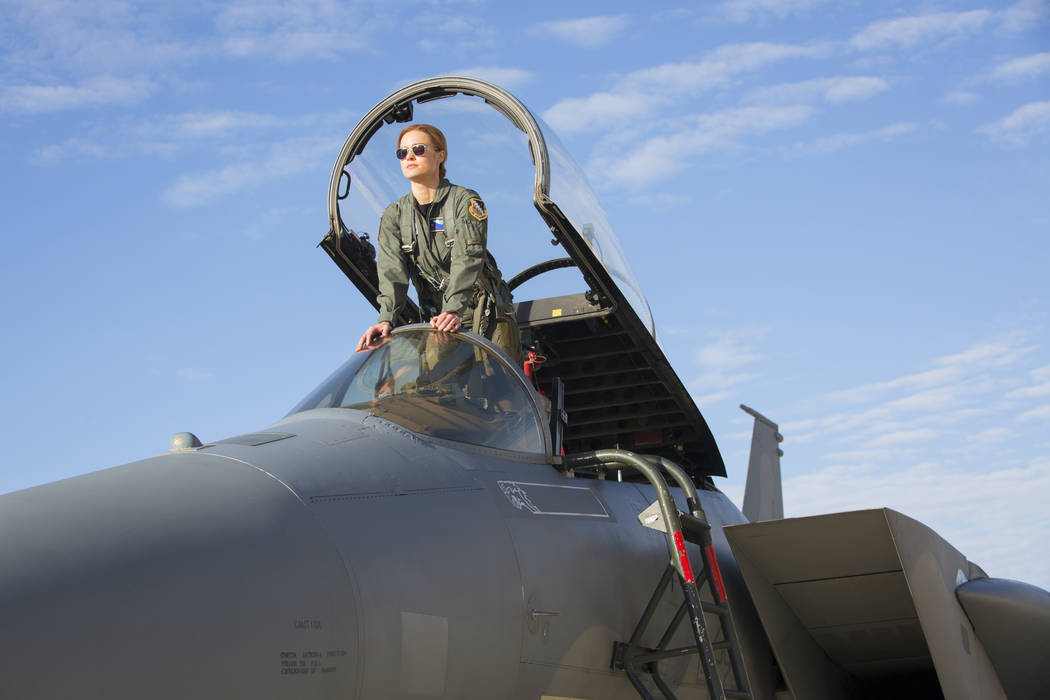 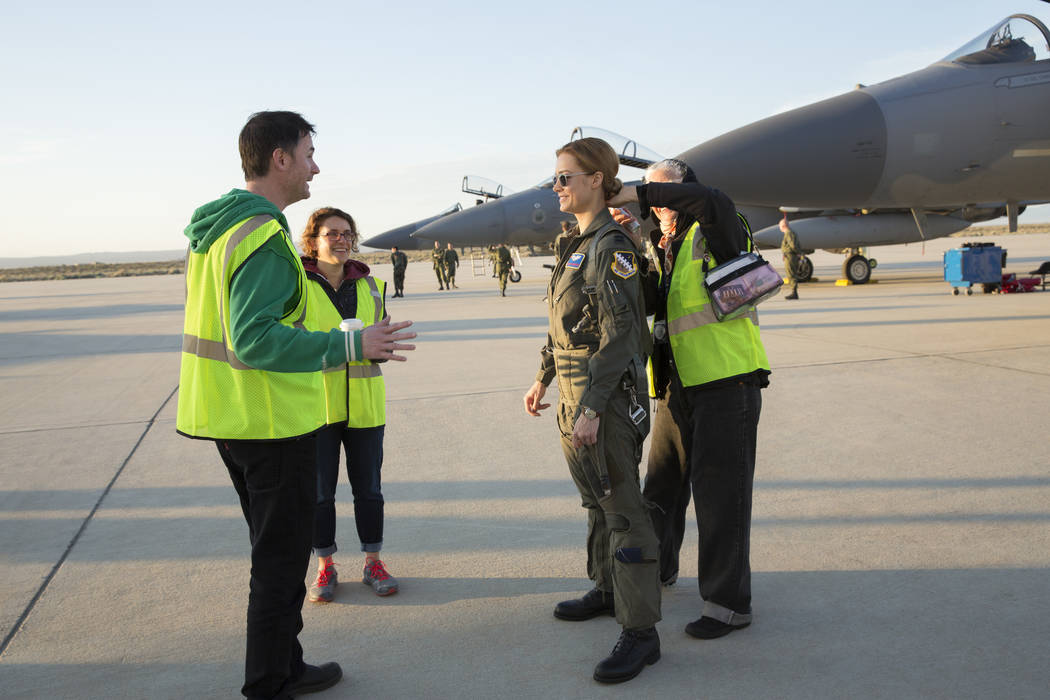 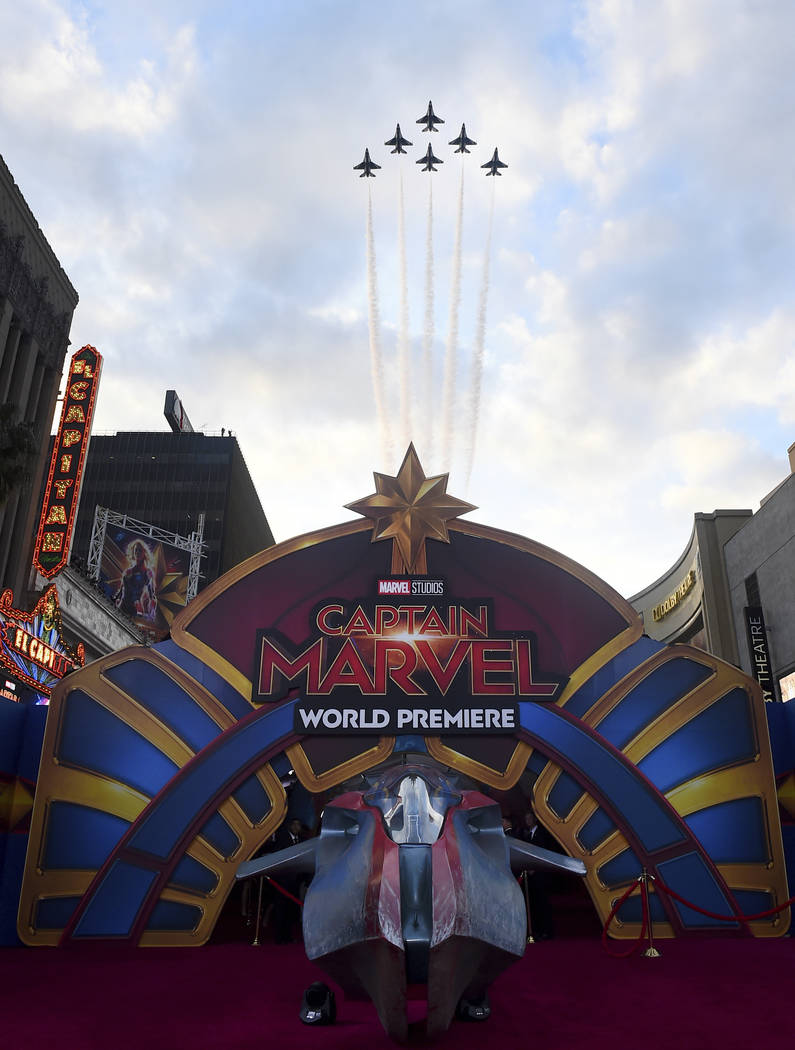 The U.S. Air Force Thunderbirds fly over the world premiere of "Captain Marvel" on Monday, March 4, 2019, at the El Capitan Theatre in Los Angeles. (Jordan Strauss/Invision/AP) 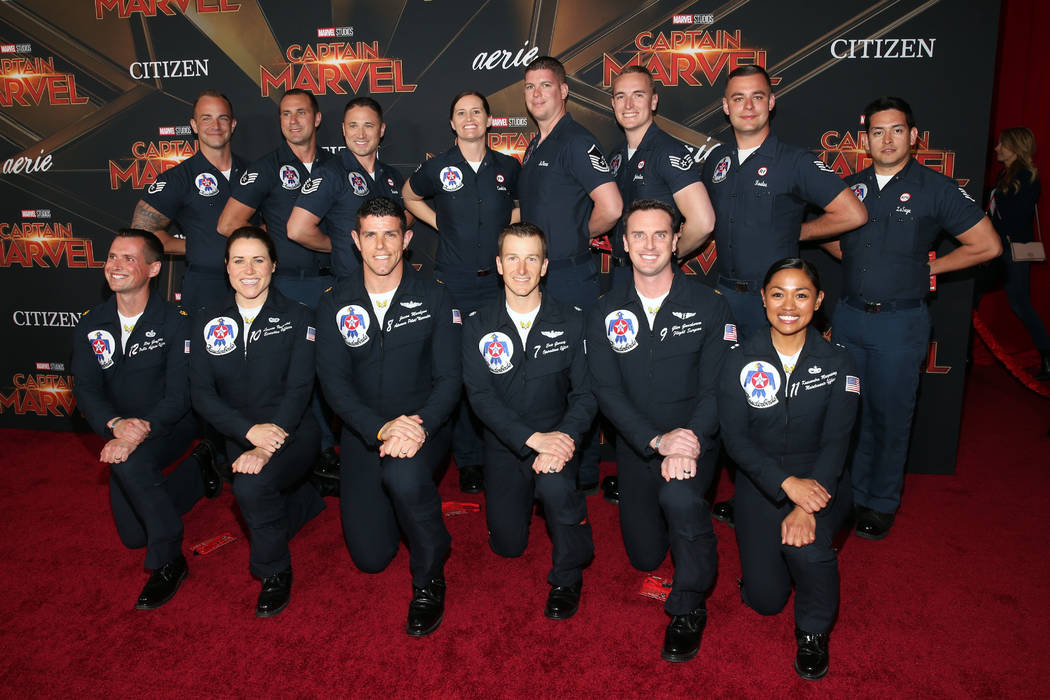 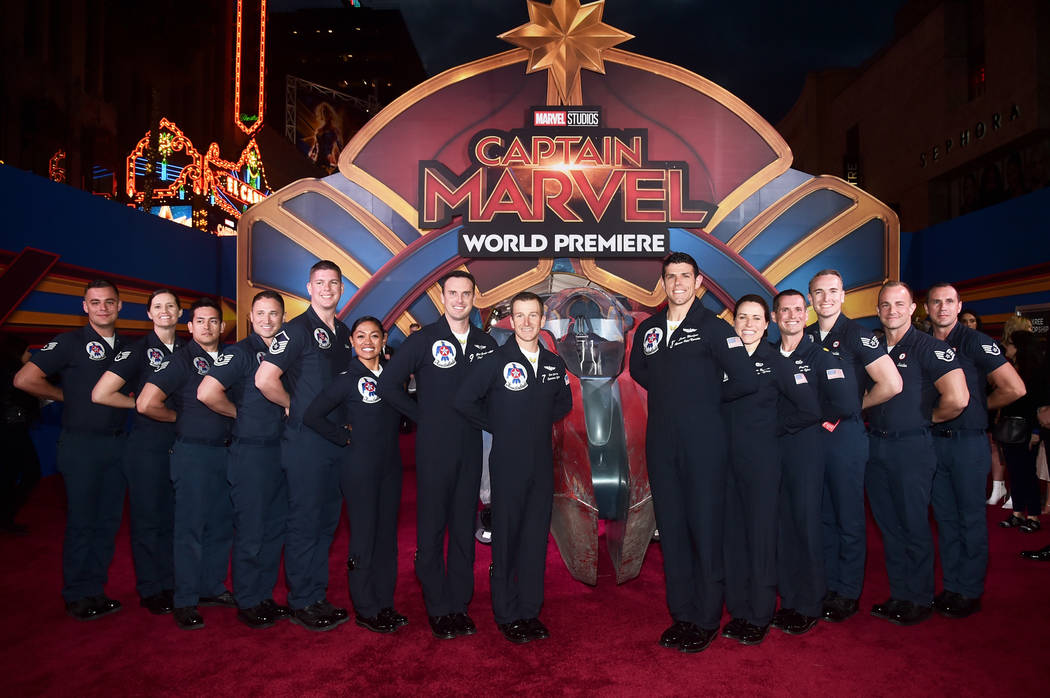 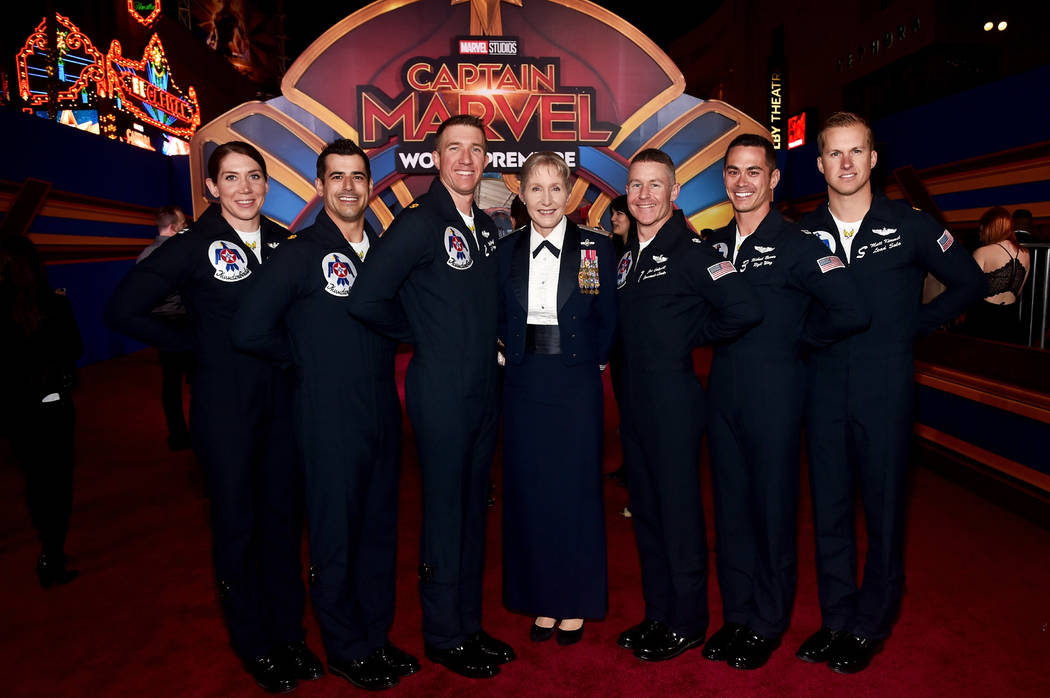 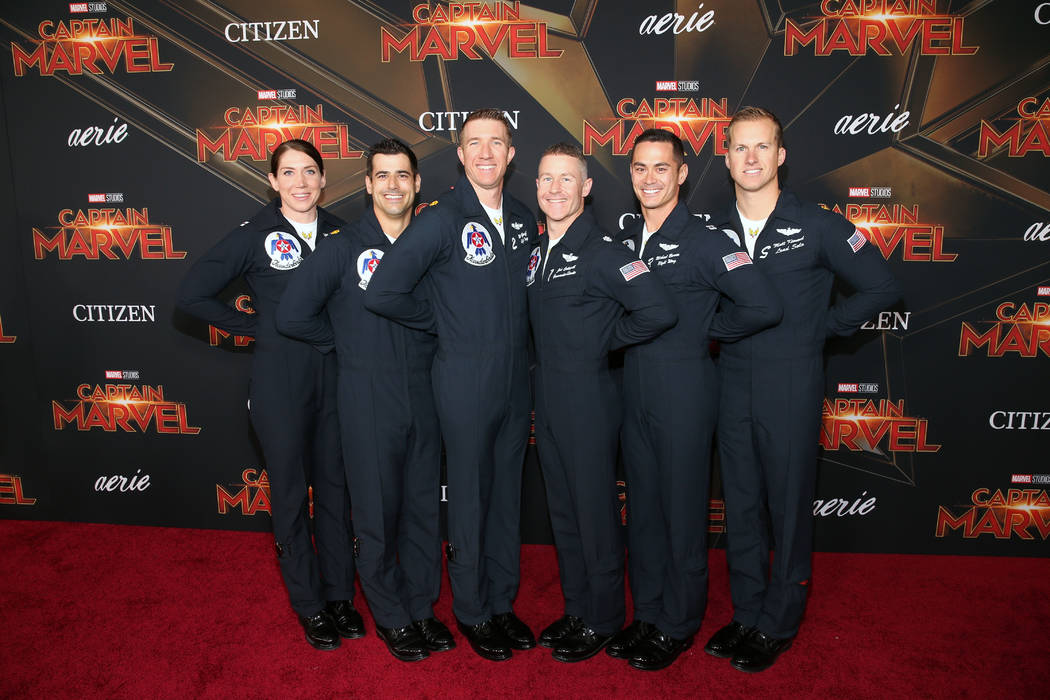 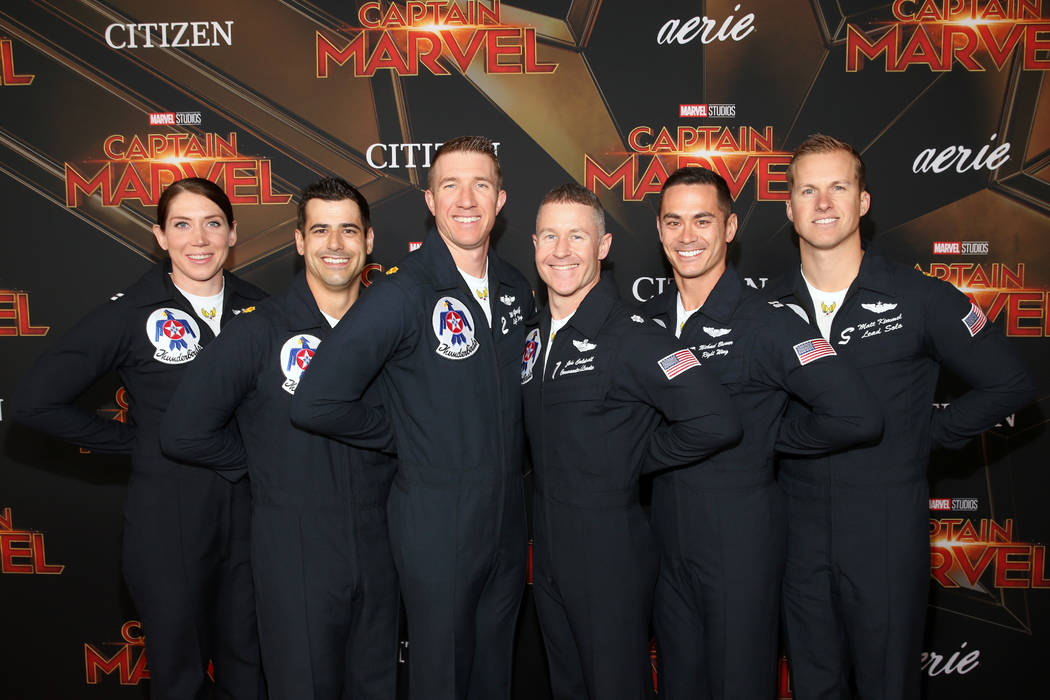 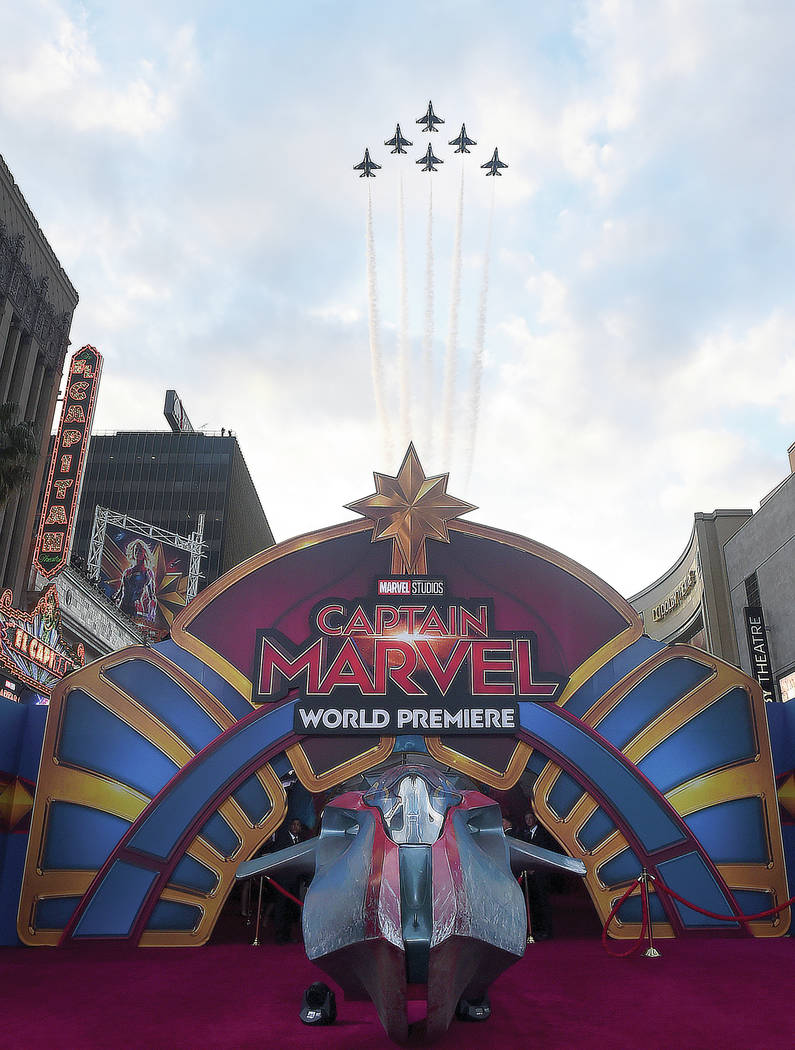 The U.S. Air Force Thunderbirds fly over the world premiere of "Captain Marvel" on Monday, March 4, 2019, at the El Capitan Theatre in Los Angeles. (Photo by Jordan Strauss/Invision/AP) 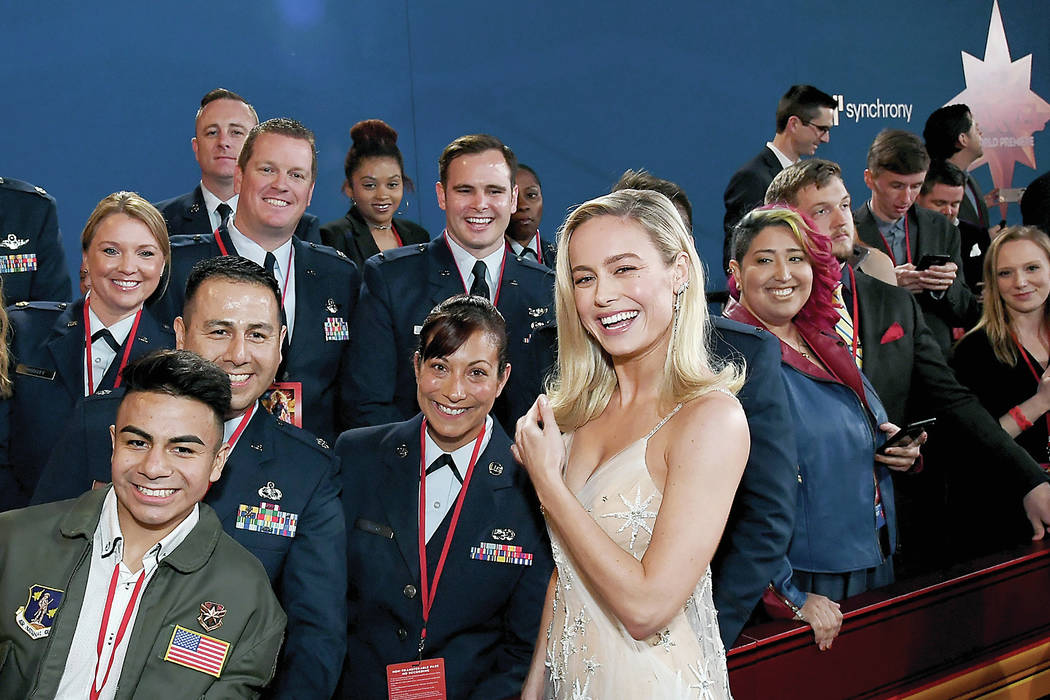 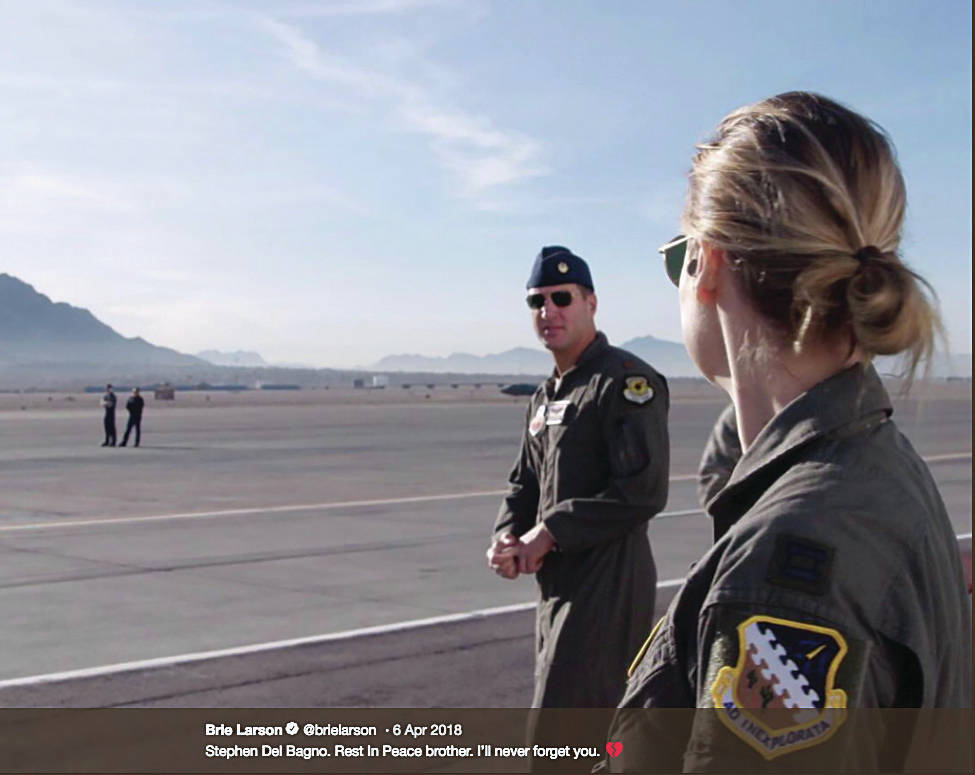 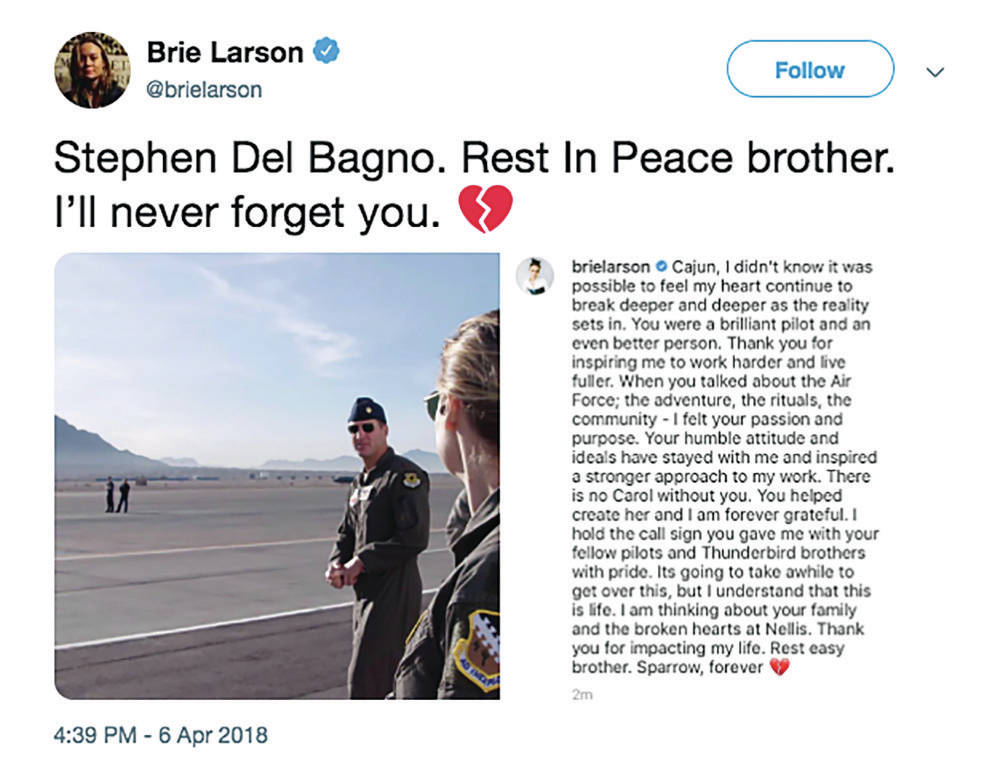 Twitter Brie Larson shared a photo of herself with Maj. Stephen “Cajun” Del Bagno on social media along with a tribute to the pilot, who was killed in a crash April 4, 2018, a week after consulting on “Captain Marvel.” 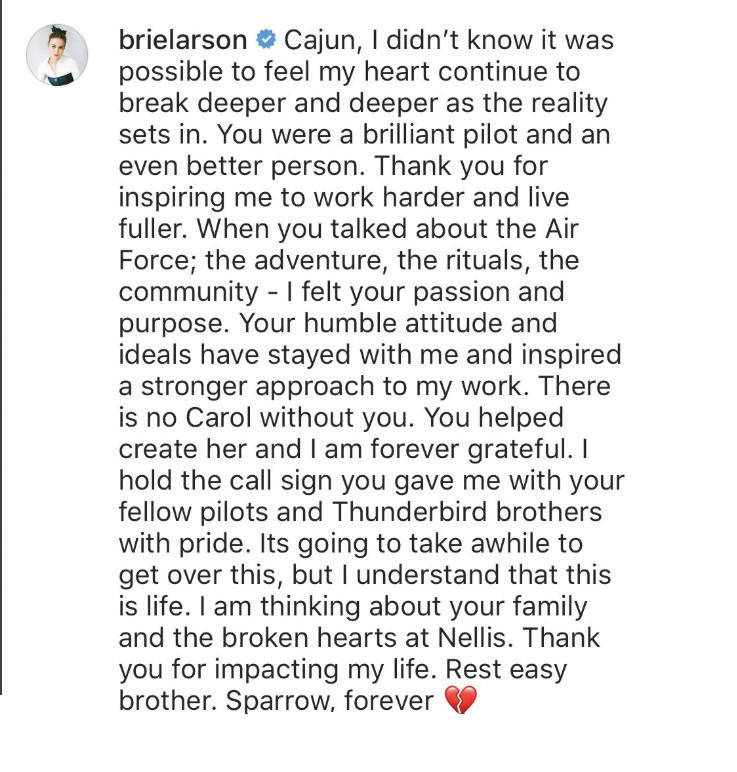 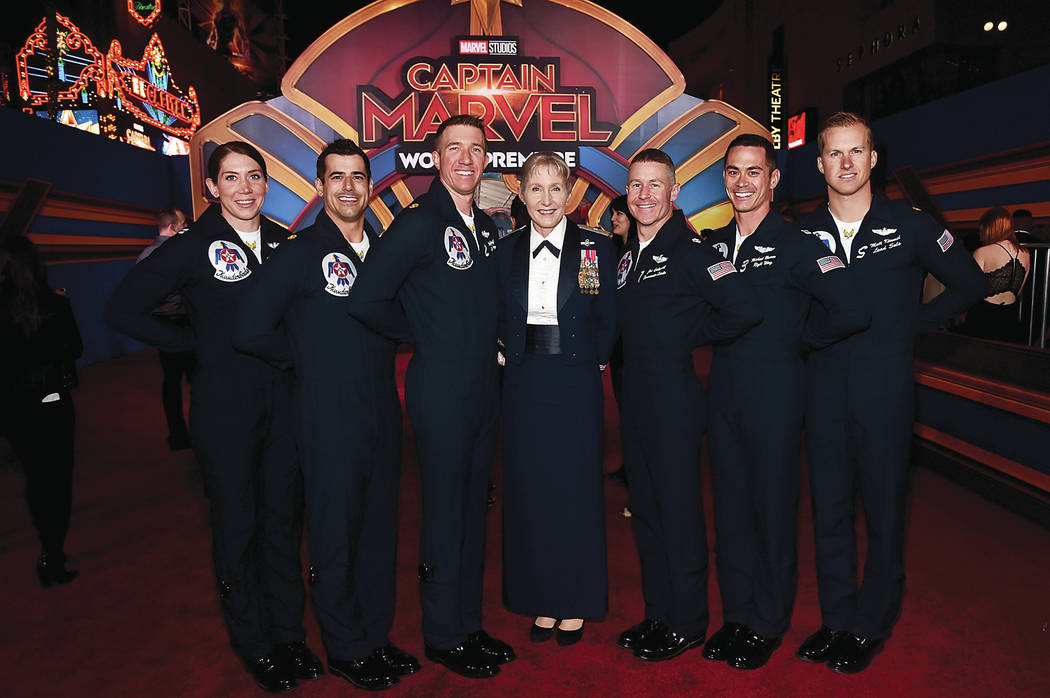 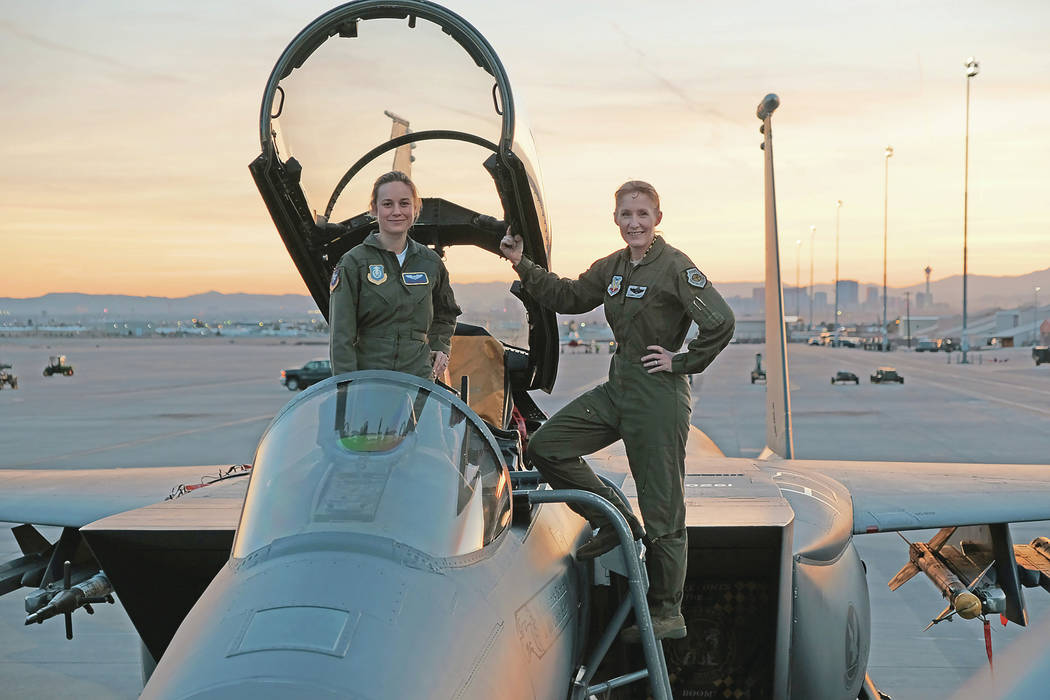 In “Captain Marvel,” the titular superhero gets her powers from the blue-skinned alien warriors known as the Kree.

Brie Larson found the power to portray her — or at least her alter ego, fighter pilot Carol Danvers — during a research trip to Nellis Air Force Base.

“It was such a pivotal part of understanding Carol and getting kind of the swag of who she is,” the Oscar winner said of that visit while answering questions from service members as part of an AMC Theatres promotion.

“I had read the comics, and there’s certain characteristics that she has — like a self-assuredness and her sense of humor, and I guess some people may call it cocky, but I would say more confidence — that I thought was just her. But it wasn’t until I came … to the Nellis Air Force Base that I realized that it’s, that’s the Air Force. That’s the spirit of the Air Force. They all have that characteristic, and I loved it so much.”

Marvel fans will remember the Kree as the antagonists from “Guardians of the Galaxy” and the most recent season of “Agents of S.H.I.E.L.D.” But since there weren’t a ton of the Smurf-shaded humanoids available for consultation, Larson immersed herself in “Captain Marvel’s” other predominant culture: the United States Air Force.

During that preproduction visit in January 2018, Larson spent time getting to know Brig. Gen. Jeannie Leavitt, the Air Force’s first female fighter pilot, who served as commander of the 57th Wing at Nellis until June.

“For General Leavitt, who paved the way for so many young women, to take the time to really sit down and talk with me was something very special,” Larson said as part of the “Captain Marvel” production notes. “I was really moved in a way that I wasn’t really expecting coming into this.”

The actress also flew with Capt. Danielle “Kazi” Park to familiarize herself with an F-16 Fighting Falcon, as well as the G-forces — she got up to 6.5 — that come with it.

“It was a little bumpy coming back, and there was pretty bad turbulence through the mountains. Oh, I threw up a lot,” Larson admitted in those notes. “But we were simulating a dogfight, so I was, like, flipping around, going upside down, and it would be crazy if I didn’t get sick.”

Maj. Matt Kimmel and Maj. Stephen “Cajun” Del Bagno, Thunderbird pilots assigned to Nellis, doubled as on-set advisers, helping the “Captain Marvel” cast and crew more accurately depict fighter pilots and their traditions. On April 4, 2018, a week after consulting on the movie, Del Bagno was killed in a crash at the Nevada Test and Training Range.

“Cajun, I didn’t know it was possible to feel my heart continue to break deeper and deeper as the reality sets in,” Larson said as part of an emotional tribute to him on social media. “You were a brilliant pilot and an even better person. Thank you for inspiring me to work harder and live fuller.”

The salute to Del Bagno continued Monday during a trip to Southern California for “Captain Marvel’s” world premiere. The air demonstration squadron flew over the Valencia home of Del Bagno’s parents, Joe and Cindy, in the missing man formation before zooming over — and eventually walking down — the red carpet on Hollywood Boulevard.

Because of the secretive scenes they contain, the Marvel movies boast the most-watched closing credits in all of moviedom. Fans waiting for the second of two sequences following “Captain Marvel” will see a special thanks to the men and women of the 57th Wing and the Thunderbirds. Leavitt, Park, Del Bagno and Kimmel are among a handful of service members highlighted “with particular appreciation.”

The last words on the screen, before the Marvel Studios logo and that final post-credits scene, serve as a fitting bookend to the tribute to the late Stan Lee that opens the movie: