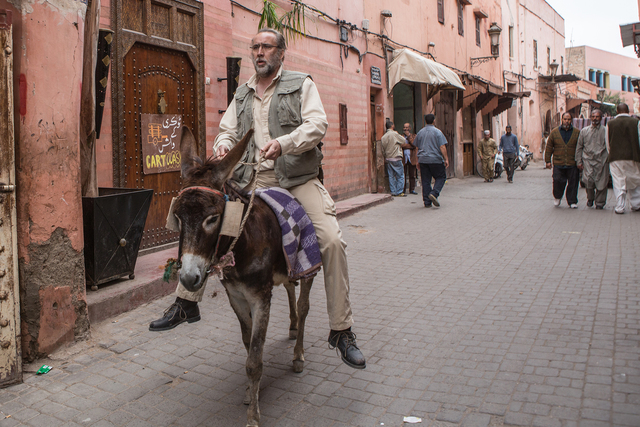 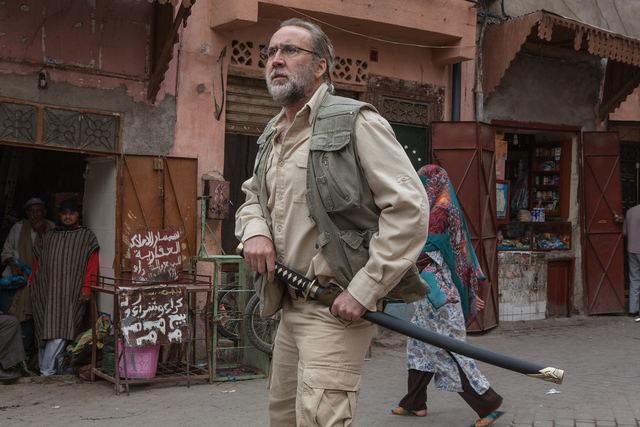 It’s the most Nicolas Cage time of the year.

When he isn’t turning up in cellphone videos hug-wrestling Vince Neil outside Aria, our favorite local Oscar winner is busy cranking out movies that play in a handful of theaters before sprinting to home video a few days later.

This month alone, Cage has three such releases: the crime drama “Dog Eat Dog,” the World War II drama “USS Indianapolis: Men of Courage” and the fact-based comedy “Army of One,” which is available to buy or rent Tuesday.

In “Army of One,” Cage stars as Gary Faulkner, a Greeley, Colorado, man described as “a part-time construction worker with bad kidneys” who travels to Pakistan to hunt Osama bin Laden armed only with a samurai sword he bought from a home shopping channel. Why, you might ask? Because, much like Jake and Elwood Blues, he’s on a mission from God.

The fact that God is portrayed by Russell Brand, who blames Noah for putting syphilis and gonorrhea on the ark, gives you a sense of just how bizarre a tone is being set by Larry Charles (“Borat,” “Curb Your Enthusiasm”), a usually reliable director of even the most experimental comedy.

Then there’s the sight of Gary flying into Pakistan on a star-spangled hang glider that looks like something he bought at Evel Knievel’s estate sale.

This really is based on a true story, but there’s no telling to what extent. “As strange as it is compelling, this is a true story,” the “Army of One” narrator says. “Or a story that has truth in it. Or, maybe, elements of truth in it.”

Regardless, Cage grabs hold of the Faulkner character with all his might and won’t let go. Again, much like in that Vince Neil video.

Faulkner harasses customers at a local hardware store for not buying American-made products. He declares, “Anybody that drinks foreign beer or foreign whiskey should be shot as a traitor.” And, when a sales clerk tells him he can’t cut up that hang glider to put it in his luggage, because that would make it structurally unsound, Faulkner responds, “Son, I can do anything. I am Gary Faulkner. I am the donkey king.”

With his high-pitched, nasally ramblings, Cage cranks the manic energy up to 11 — which, for any other actor, would be somewhere around 37.

For a while, it’s fun as Faulkner searches for bin Laden — and a Denny’s — in Pakistan. But between the copious amounts of hash he smokes and the weeks he’s gone without dialysis, Faulkner’s delusions become more paranoid and less engaging.

And there’s simply no accounting for how he keeps traveling back to the region, considering he conned his dentist (Matthew Modine) out of $1,000 to buy a boat to sail to Pakistan only to end up in Mexico. His financial situation is never mentioned again, except for a quick trip to Las Vegas — or at least a close approximation of Las Vegas — to lose even more money.

That he keeps leaving his high school classmate Marci (Wendi McLendon-Covey) and her disabled daughter, Lizzie (Chenoa Morison) — who, for some reason, seem to love him and support his quixotic quest — only further disrupts any sense of reality.

“Look at me,” Faulkner says after a hang-gliding mishap. “I’m as crippled as Lizzie is.”

“Well, she’s a 10-year-old girl with cerebral palsy,” Marci patiently explains, “and you’re a grown man who jumped off a cliff on purpose.”

There’s a very fun, likable movie to be made out of all of this, but it proves nearly as elusive as bin Laden himself.

When the media latches onto Faulkner’s story, he starts telling people Hollywood called to make a movie about him. Asked who he’d like to play him, Faulkner suggests Clint Eastwood, maybe Dan Aykroyd, in what surely is the only time those two have ever been mentioned for the same role.

Actually, with his beard and long gray hair, he looks more like Brent Spiner in “Independence Day.” But that’s beside the point.

Assuming there was ever any point at all.