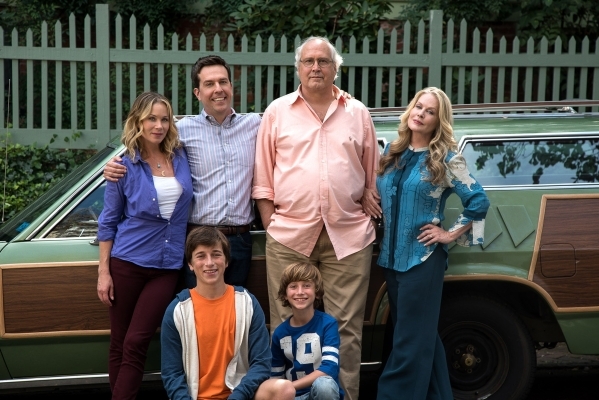 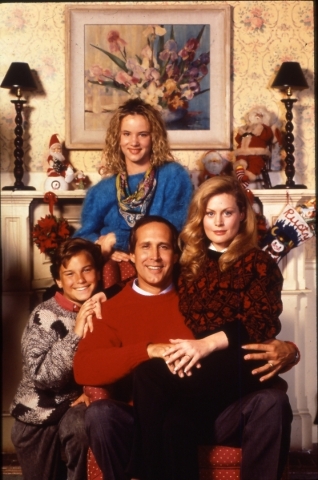 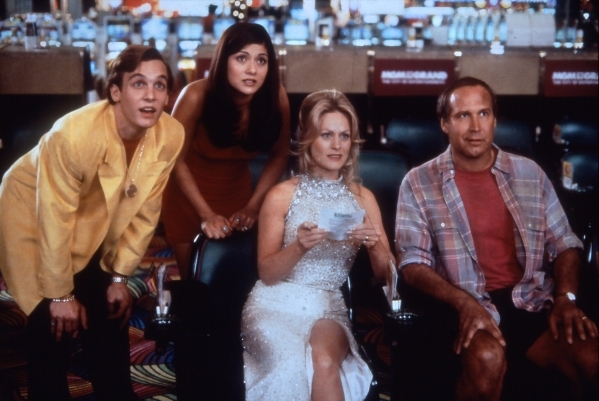 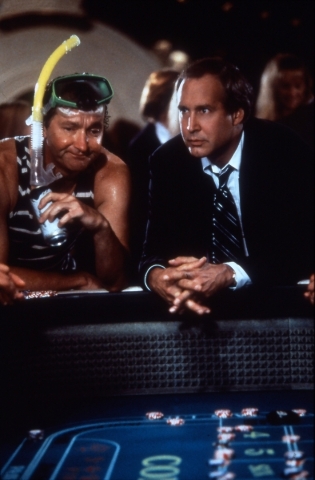 In an era of high-profile musical residencies and six-figure nightly payouts to the world’s top DJs, it’s easy to forget that Las Vegas once was the place where entertainment careers went to die.

It’s certainly where the beloved “Vacation” franchise coughed and wheezed before expiring in a puddle of its own sick.

Released in 1997, “Vegas Vacation” was so awful, so devoid of anything resembling entertainment, it took 18 years for the next installment, simply titled “Vacation,” to hit theaters.

One of the trailers for the sequel/reboot that finally opens July 29 shows an adult Rusty Griswold (Ed Helms) reminiscing about the time he and his family drove across the country to visit the Walley World amusement park. “I’ve never even heard of the original vacation,” his oldest son shrugs. “Doesn’t matter,” Rusty responds. “The new vacation will stand on its own.”

Here’s the thing, though: It absolutely matters if younger viewers have never heard of the original “Vacation.” Especially since, thanks to reruns on TBS, there’s a chance they’re only familiar with the dreadful “Vegas Vacation.”

In 1983, frazzled food additives researcher Clark Griswold (Chevy Chase) shoved his loving wife, Ellen (Beverly D’Angelo), and their teenage children, Rusty (Anthony Michael Hall) and Audrey (Dana Barron), into their Family Truckster and dragged them from Chicago to Los Angeles amid a string of setbacks, misadventures and disturbing behavior.

Not only was “National Lampoon’s Vacation” a surprise hit, it was decades ahead of its time as viewers found themselves rooting for a sociopath long before that became the norm thanks to everyone from Dexter Morgan to Dr. Gregory House to the leads of pretty much every series on FX.

Despite the animal abuse, corpse desecration, kidnapping and public indecency — although it’s still hard to think of anything involving Christie Brinkley as indecent — the original “Vacation” became a comedy classic that cemented the reputation of second-time director Harold Ramis (“Caddyshack”) and launched the career of screenwriter John Hughes.

Hughes was back for 1985’s “National Lampoon’s European Vacation,” with Amy Heckerling (“Fast Times at Ridgemont High”) taking over directing duties. The result is little more than a rushed money grab offering few genuine laughs, but it still made an impression on viewers of a certain age.

Growing up, whenever we’d see an inappropriate display of public affection, one of my friends or I would inevitably quote Rusty’s emphatic, “Dad, I think he’s going to pork her!” In college, I spent five days in Paris looking for a shop that would embroider “Rusty” on a beret. And to this day, whenever I’m in a roundabout with another car, I can’t help but recite the Big Ben-Parliament scene, which is one of several reasons why I don’t live in Summerlin.

Even after that misguided effort, it took only four years for the Griswolds to return in 1989’s “National Lampoon’s Christmas Vacation.” Despite some cringe-worthy bits involving the Griswolds’ neighbors (Julia Louis-Dreyfus, Nicholas Guest), it’s become a holiday staple.

So how did everything go so very, very wrong with “Vegas Vacation”? Not only was it the first in the franchise not written by John Hughes, National Lampoon wouldn’t even put its name on it.

Clark’s announcement that he’s taking the family to Las Vegas is met with zero enthusiasm. “Dad, Las Vegas? There’s nothing to do there,” Audrey complains. “Clark, I don’t think that Las Vegas is the kind of place you take a family,” Ellen cautions. Maybe it’s just not the place you take this particular family.

From some forced slapstick involving Clark and Ellen’s attempt to join the mile-high club to way too much Cousin Eddie (Randy Quaid), “Vegas Vacation” is almost completely free of laughs, logic and recognizable human behavior.

The recurring bit involving Wallace Shawn as The Mirage’s sadistic, vindictive blackjack dealer, who rejoices as he takes Clark for more than $20,000, isn’t just annoying, it makes zero sense. When have you ever seen a dealer actively root for the house?

There’s a total of 100 seconds of enjoyment in “Vegas Vacation,” during which Clark and Eddie visit a downtown casino that specializes in games of chance such as coin toss, rock paper scissors, pick a number between one and 10 and casino war, the last of which actually became a thing. But that’s it. Everything else is so bad, not even a literal last-gasp effort by the legendary Sid Caesar can save it.

If anything, “Vegas Vacation” serves as a document of a bygone era in Strip entertainment, showcasing Wayne Newton in concert and, for no real reason, Siegfried & Roy’s distractingly large codpiece. (Their longtime manager, Bernie Yuman, also has a small role.)

What felt like a new life for the franchise was quickly rejected by critics. At a meager 13 percent on Rotten Tomatoes, it earned barely a third of the positive reviews of the lowly “European Vacation.”

“Vegas Vacation” was so toxic, the only place the Griswolds turned up during the ensuing 18 years was a series of Old Navy commercials.

All that will change Wednesday when Rusty drags his family, kicking and screaming, to Walley World, with a stop to see Clark and Ellen along the way.

Co-writers and directors Jonathan Goldstein and John Francis Daley (“The Incredible Burt Wonderstone”) have been wrestling “Vacation” to the screen since early 2010. Hopefully, they made good use of all that time.

Because if this one’s anywhere near as unpleasant as “Vegas Vacation,” we might not see the Griswolds again until Rusty’s great-great grandkids take up the cause.