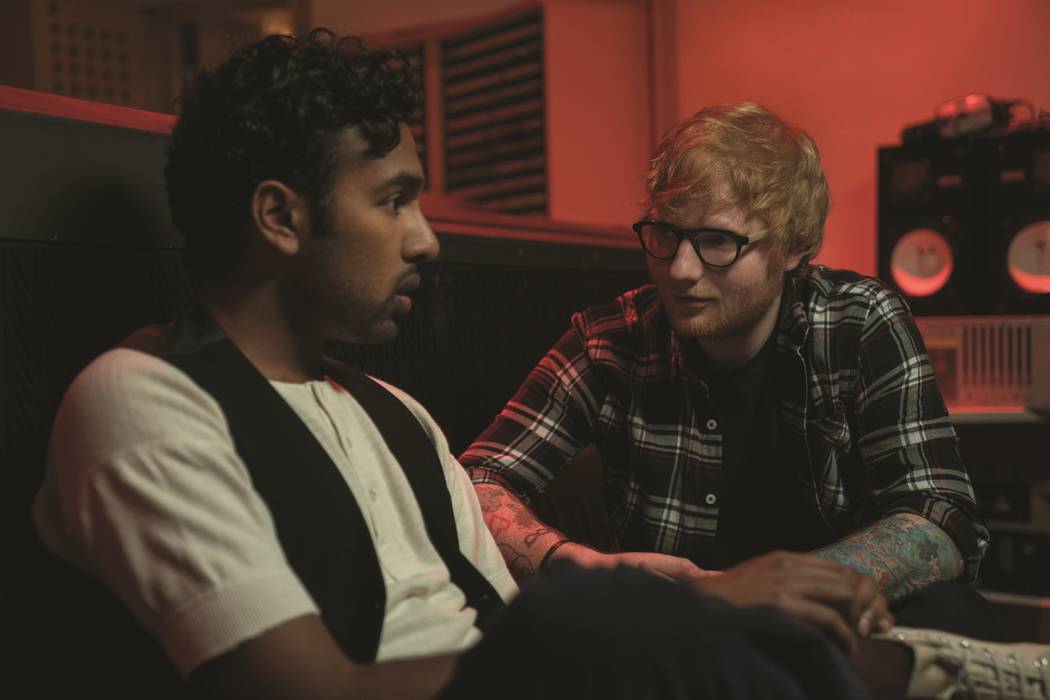 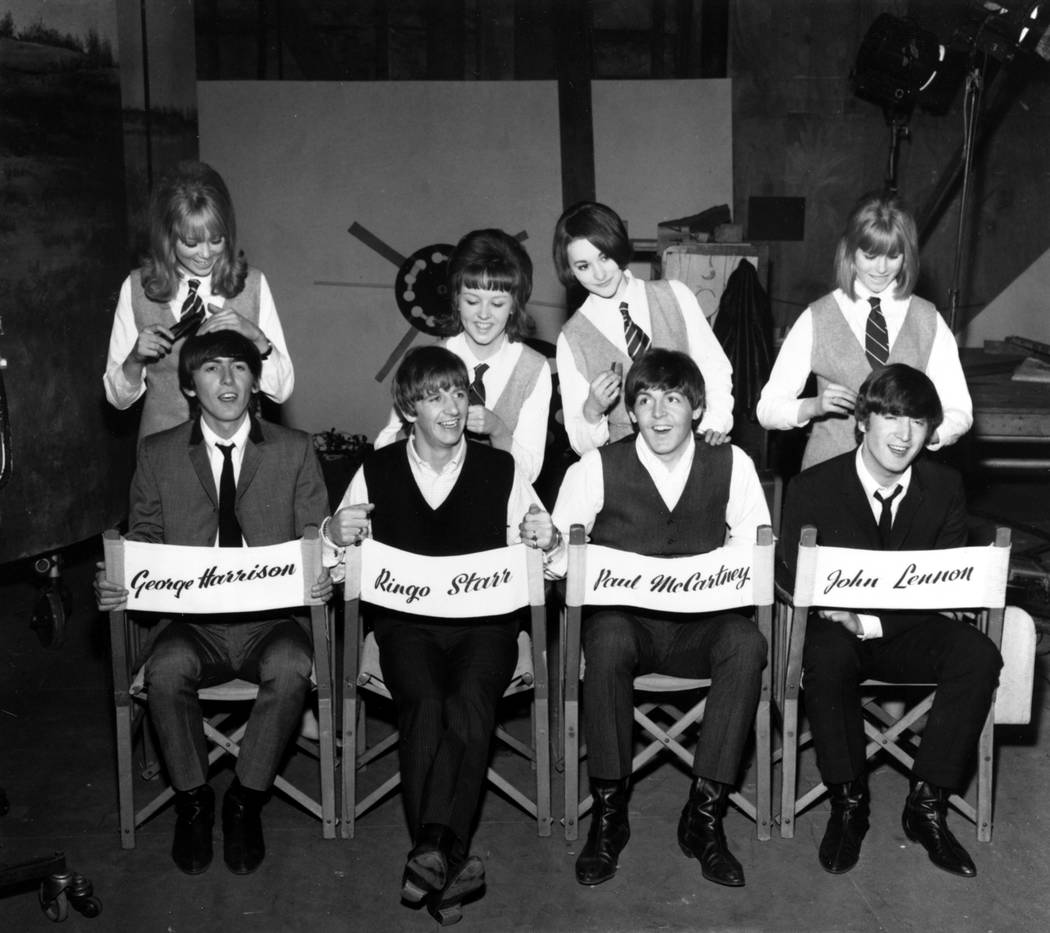 The Beatles, George Harrison, Ringo Starr, Paul McCartney and John Lennon, have their hair combed by stylists on the set of their first movie production, "A Hard Day's Night," at Twickenham Film Studios in Middlesex, outside London, England, on March 12, 1964. The hair stylists, who have parts in the film, are, from left, Patti Boyd, 19, Tina Williams, 17, Pru Bury, 22, and Susan Whitman, 17. (AP Photo) 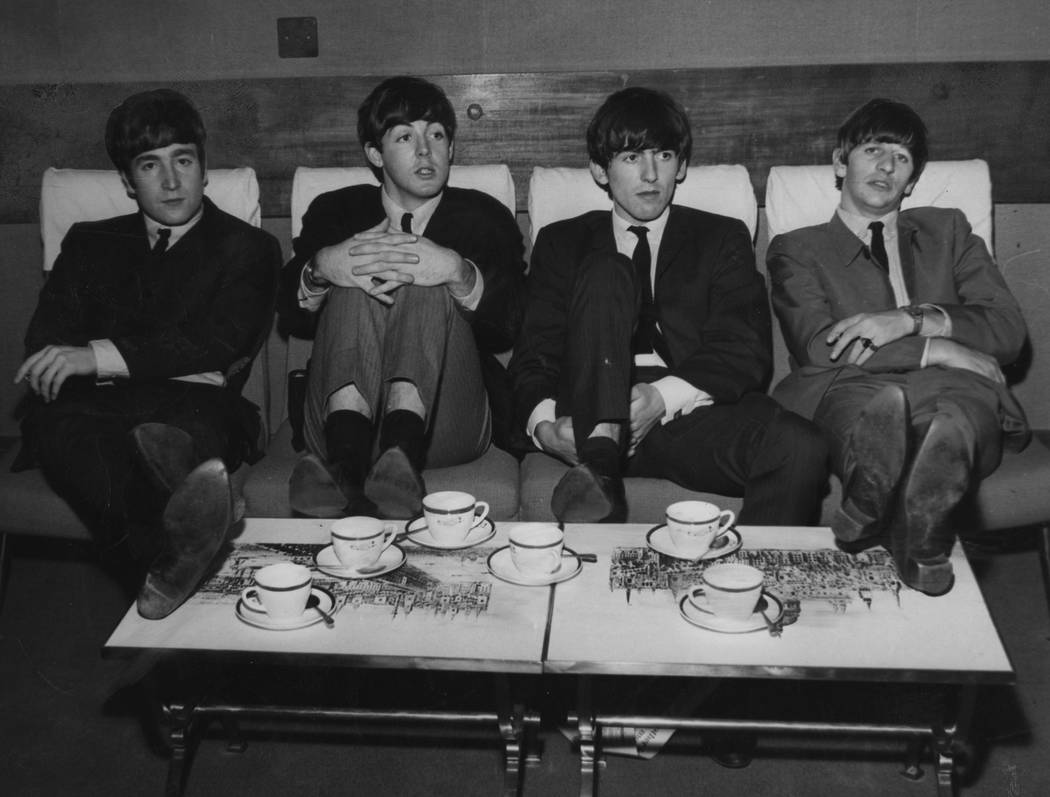 The Liverpool beat group The Beatles, with John Lennon, Paul McCartney, George Harrison and Ringo Starr, George Harrison, take it easy resting their feet on a table, during a break in rehearsals for the Royal variety show at the Prince of Wales Theater, London, England, November 4, 1963. (AP Photo) 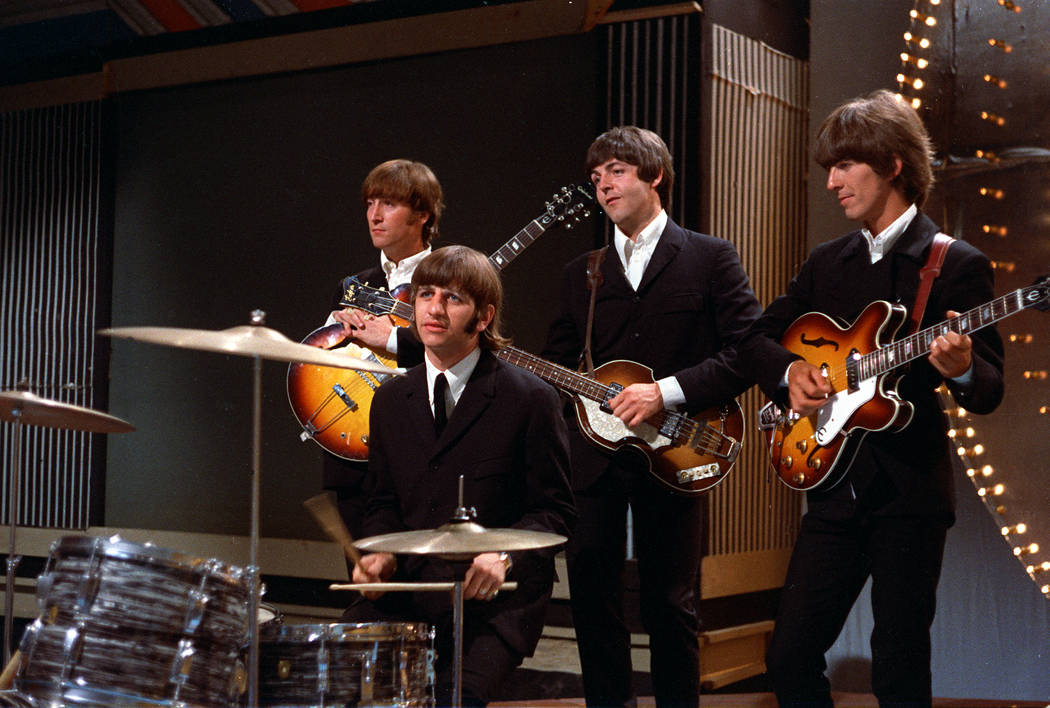 The Beatles pose together before their performance in a TV studio in London, England, in 1966. (AP Photo) 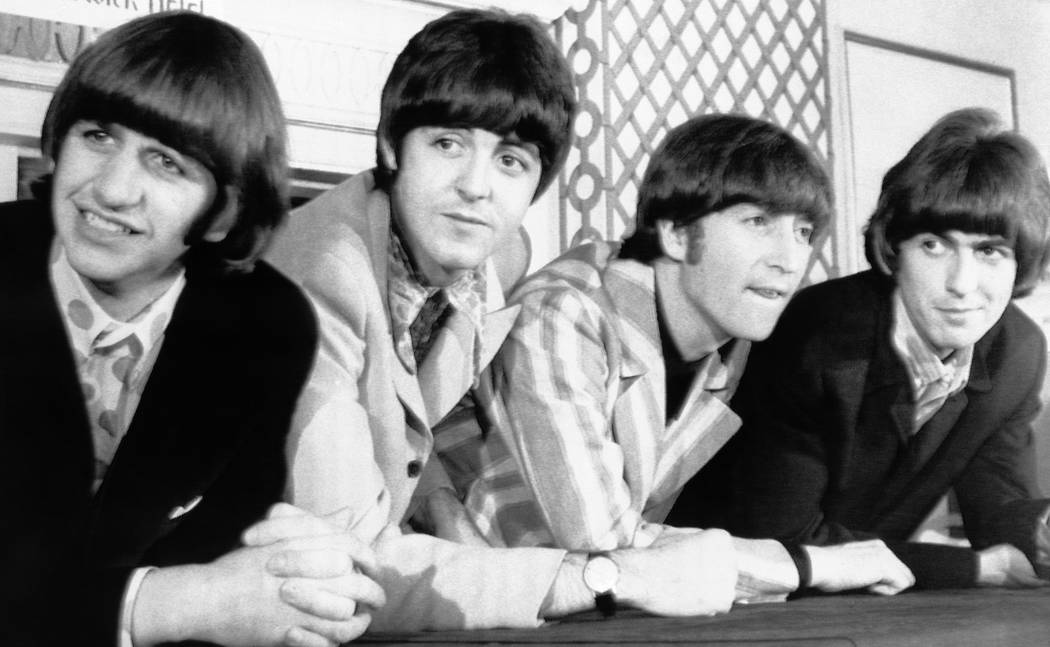 The Beatles pose for photographers during a press conference in New York on Monday, August 23, 1966. The group wound up their current U.S. tour with a concert in New York. L-R: Ringo Starr; Paul McCartney; John Lennon; and George Harrison. (AP Photo) 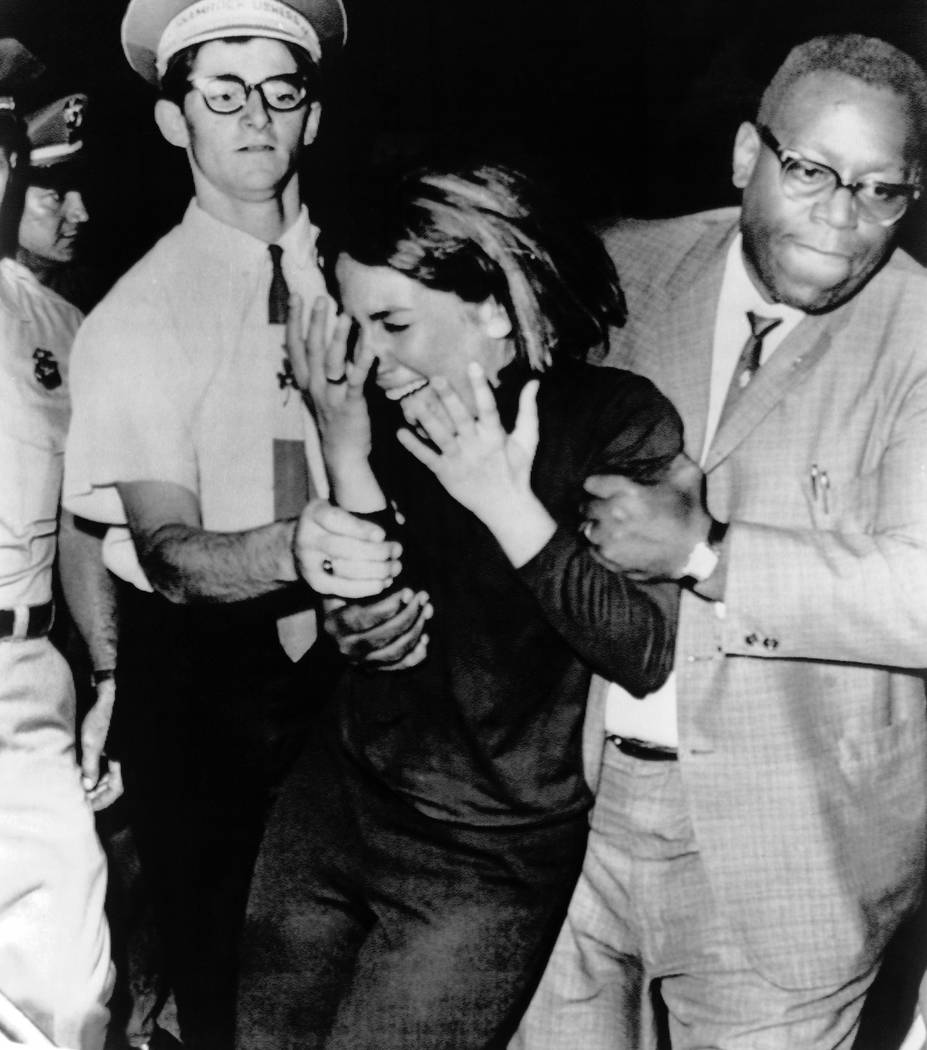 In this Aug. 21,1964 file photo an overwrought Beatles fan is escorted from the hall during the Beatles second stop of their U.S. tour in Las Vegas, Nevada. (AP Photo) 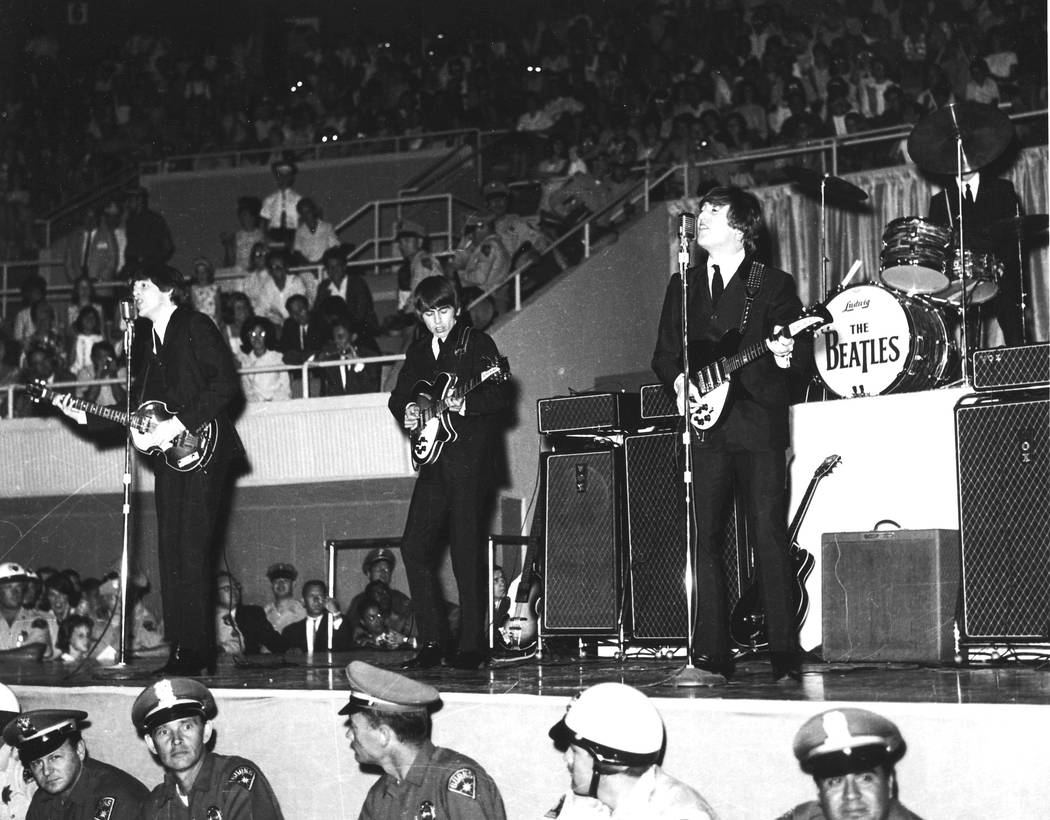 The Beatles - Paul McCartney, George Harrison, Ringo Starr and John Lennon - playing at the Convention Center - staying at the Sahara 1964 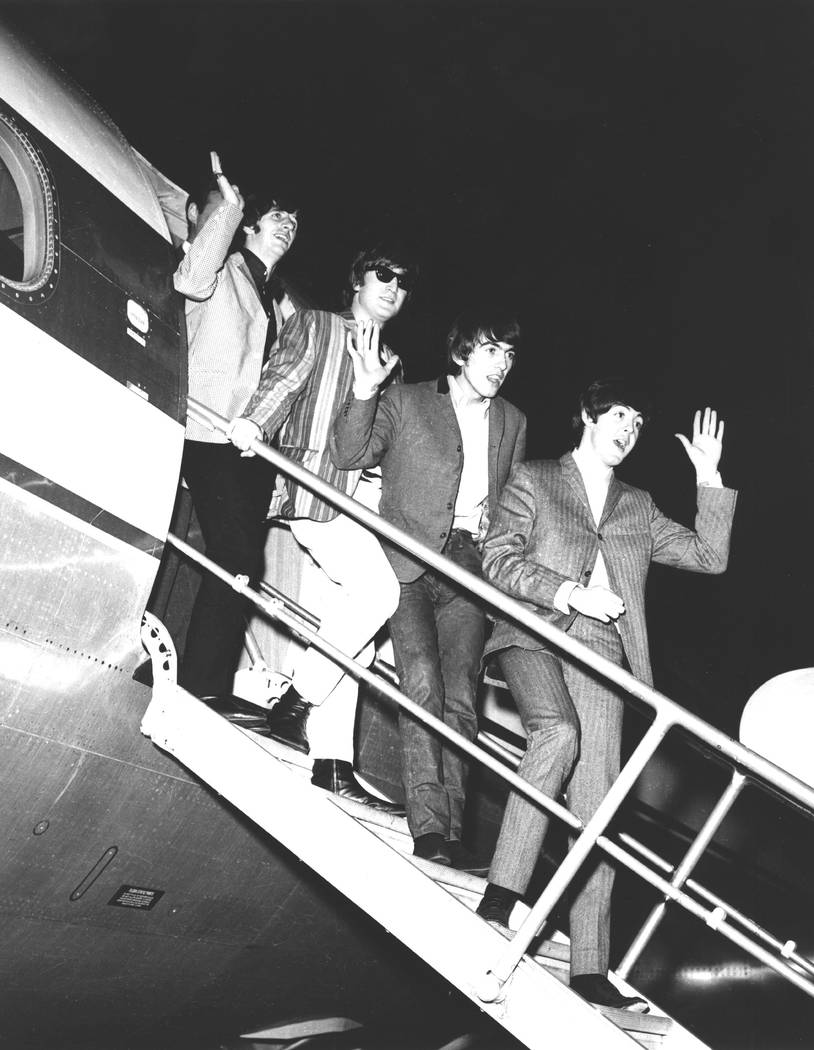 The Beatles arrive at McCarran Airport in Las Vegas, Aug. 19, 1964. The stayed at the Sahara and performed at the Las Vegas Convention Center.

Hollywood just can’t let it be.

The Beatles made five movies — three live action, one animated, one documentary — between their breakthrough in 1964 and their breakup in 1969.

Then there’s the subgenre of “Beatles inspired” or “Beatles adjacent” dramas, such as the reverential “Yesterday,” opening Friday, that local fans can use to pre-game Paul McCartney’s two weekend shows at T-Mobile Arena.

Here’s a look at it and other Beatles movies that are only kinda, sorta about the Beatles.

In this sweet-natured love letter to the band, written by Richard Curtis (“Love Actually”) and directed by Danny Boyle (“Slumdog Millionaire”), struggling singer-songwriter Jack Malik (Himesh Patel) has just decided to give up on his dream and return to teaching.

Then, following a brief global blackout, he discovers he’s the only person on the planet who’s ever heard of the Beatles, passes their songs off as his own creations and becomes an international superstar after opening for Ed Sheeran on his world tour.

Nobody knows the Beatles, yet the entirety of humanity knows Ed Sheeran. Global blackouts are funny that way.

“Yesterday” isn’t the first movie to imagine a world without the Beatles. Take this mockumentary, written by and starring Eric Idle, that chronicles the rise and fall of the Rutles, a very Beatles-esque band from Liverpool.

John Belushi, Bill Murray, Gilda Radner and Dan Aykroyd make cameo appearances, while Mick Jagger and Paul Simon discuss their “memories” of the Prefab Four — Nasty, Dirk, Stig and Barry — who, the film tells us, “created a musical legend that will last a lunchtime.”

The divinely silly project ranges in tone from inspired parody to Mad Magazine castoffs, but at least one Beatle got the joke: That’s George Harrison as a TV reporter interviewing the Rutles’ press agent (Michael Palin) and a biker (Ron Wood).

So you want to continue the Beatles’ musical legacy in film, but it’s 1978 and your chances of reuniting the band are even less than those of “Saturday Night Live” mastermind Lorne Michaels with his offer of “a certified check for $3,000.” What’s a movie producer to do? Have the Bee Gees and Peter Frampton stand in for them, of course.

The drab four and friends perform virtually the entirety of the famed album, as well as most of “Abbey Road,” in this nightmare whose only scripted words are narrated by George Burns. For some reason, he also sings “Fixing a Hole.”

Think of it as “Sgt. Pepper’s” with dialogue. And a budget. And a vague semblance of a story.

A mishmash of 1960s stock characters named after Beatles songs and lyrics, led by Jude (Jim Sturgess) and Lucy (Evan Rachel Wood), cover 30-something of the band’s hits.

Director Julie Taymor brings some of the magic from her staging of Broadway’s “The Lion King” to this jukebox musical. The result isn’t exactly revolutionary, though, considering it opened more than a full year after Cirque du Soleil’s similarly abstract “Love.”

Still, with Bono belting out “I Am the Walrus,” the whole thing turned out far better than the singer’s other collaboration with Taymor: the musical “Spider-Man: Turn Off the Dark.”

Six New Jersey teenagers arrive in Manhattan on Feb. 9, 1964, drawn to the Beatles’ first appearance on “The Ed Sullivan Show,” in this “American Graffiti”-style comedy.

The madcap romp, nearly derailed by wearying levels of slapstick, isn’t particularly accomplished. One of the girls ends up alone in the band’s hotel room, making out with McCartney’s bass guitar, while another hatches a perfectly relatable plan to launch her photojournalism career by posing as a prostitute to earn $50 to pay a stagehand to let her sneak into the Ed Sullivan Theater so she can take pictures of the band.

“I Wanna Hold Your Hand” is noteworthy, though, as the first movie Steven Spielberg executive produced and as the feature writing and directing debut of Robert Zemeckis, who got to burn off some of his lesser nostalgic ideas before making a little movie called “Back to the Future.”