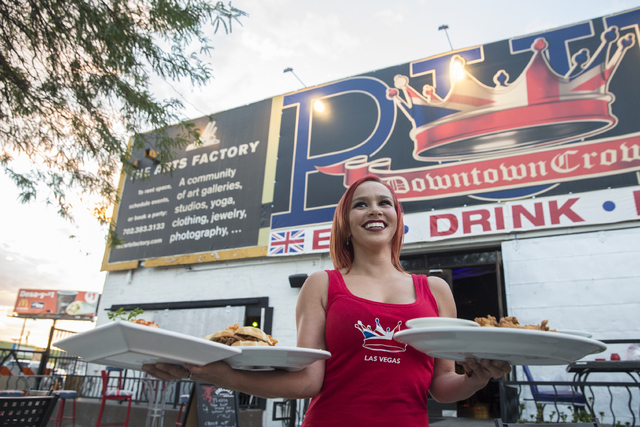 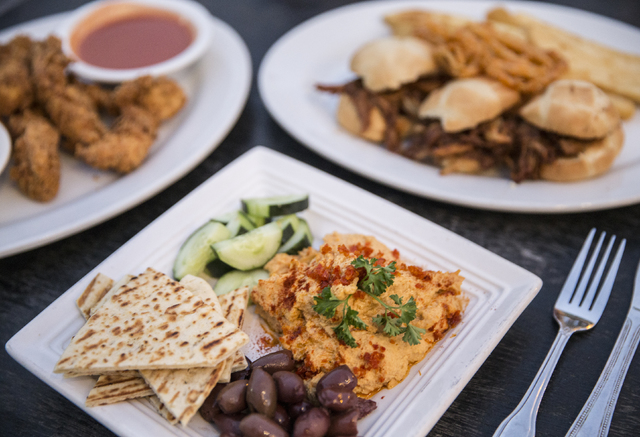 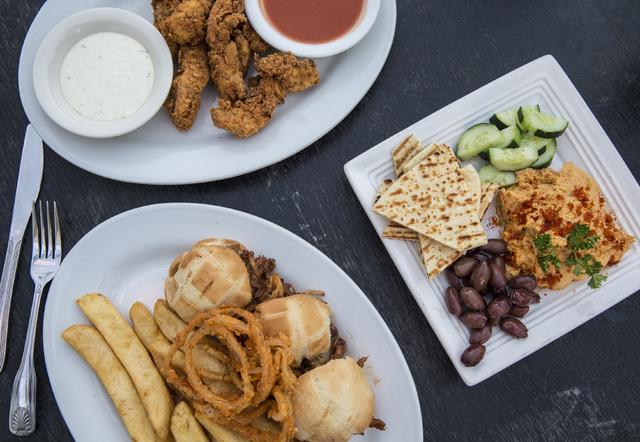 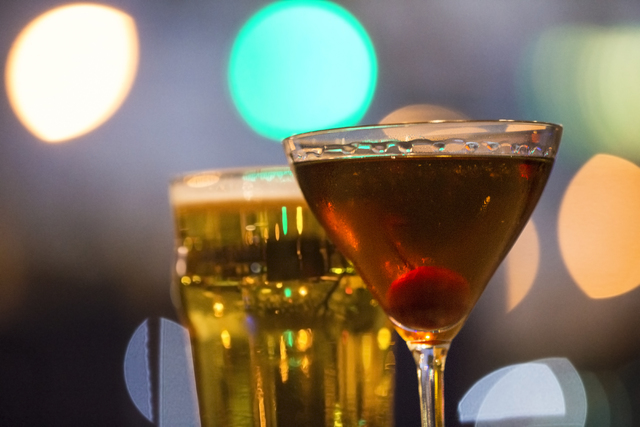 A Manhattan cocktail and Carlsberg beer at the Downtown Crown on Friday, Oct. 28, 2016, in Las Vegas. (Benjamin Hager/Las Vegas Review-Journal) 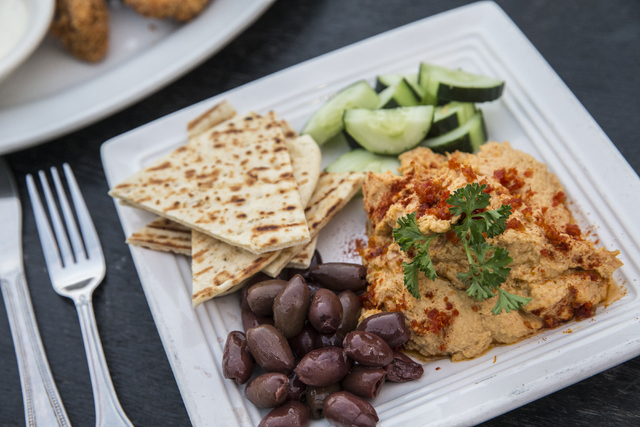 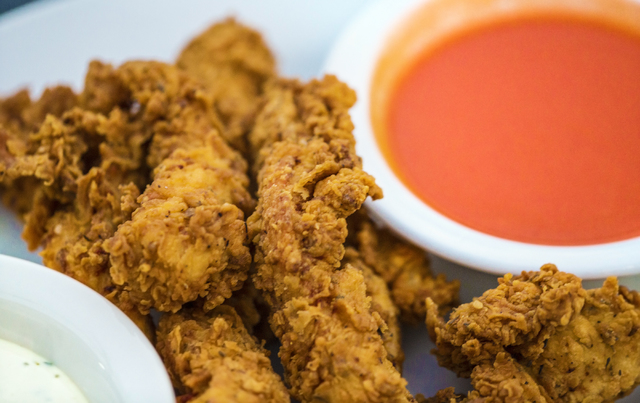 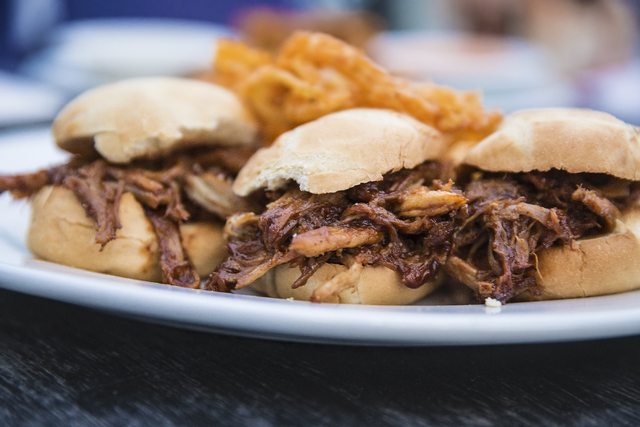 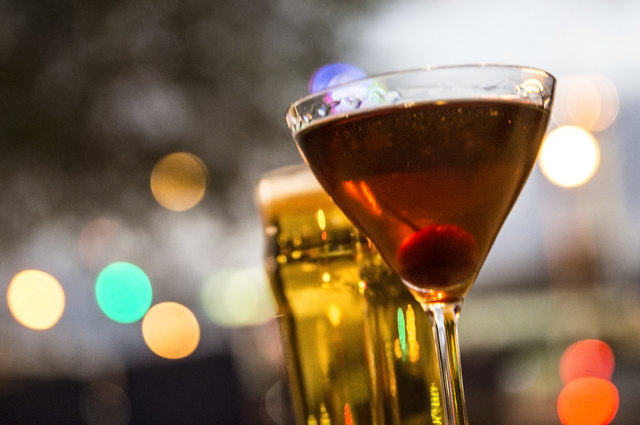 A Manhattan cocktail and Carlsberg beer at the Downtown Crown on Friday, Oct. 28, 2016, in Las Vegas. (Benjamin Hager/Las Vegas Review-Journal)

It’s like they took the former Bar + Bistro, blew it up and started from scratch. Except they didn’t.

When the Crown & Anchor, which already had two well-established locations in Las Vegas, announced plans to go into the familiar building on Charleston Boulevard between Main Street and Casino Center Boulevard, there were a lot of flummoxed foodies. During the period when Bar + Bistro and a couple of predecessors occupied the space, it was charming, with palette-shaped tables particularly appropriate for the arts district, but the space was chopped up and seemed awkward at times.

What a difference a Crown makes. There’s still the awkward parking situation and less-than-elegant entry, but once inside, this former warren is wide open. The first room is the pub itself, which is predictably on the raucous side, but behind that there’s a dining room and a game room with darts and billiards.

The Downtown Crown Pub also has Madison, who was our server that evening, and who’s a diminutive young woman with a friendly, upbeat air and the confidence that comes with knowledge and experience — which makes her pretty much the ideal server. She guided us to the dining room, where it was comparatively quiet, and started sharing tips and suggestions.

First, we learned, some of the more traditional dishes were not available because they’re being taken off the menu — not surprising, really, because steak and kidney pie probably isn’t a big seller in Las Vegas and the beef Wellington on the “posh” menu may be a little too posh.

There’s still plenty there that’s interesting, though, which is why we were torn between the Giant Yorkshire Pudding ($2.95) and the Scotch egg ($5.95) to start, the Yorkshire winning out mainly because we wanted to see what they would do with it. The menu said it was “way better than simply bread and butter,” and indeed it was, sort of a big popover (absent the beef fat that usually comes with Yorkshire pudding), accompanied by cups of warm gravy and honey. And it was just as it should have been, a delicate crust shielding air pockets separated by custardy bits.

One of the things I found appealing about the fish and chips ($13.95) was that the fish portion was of a reasonable size instead of the cover-the-plate variety. The mild cod was meaty but flaky, the beer-batter coating golden and so crisp it devolved into shards (which is a good thing). With it: crisp-edged largish fries and the peas so beloved by the Brits.

The steak and kidney pie might be gone, but chicken and leek ($11.95) is not, and it’s a good one. The chicken chunks were white meat and generous, a good proportion of leeks lent their distinctive springlike flavor, and the crust was delicate and flaky. That there were potatoes in the pie and offered on the side as fries or mashed (or rice) seemed like carb loading — not to mention, yes, more peas — but the mashed and gravy were pretty good.

Sticky toffee pudding ($4.95) with a warm caramel sauce was a sweet way to end, even if the pudding’s texture was toughened a bit by warming in the microwave.

Service was exceptional. The atmosphere is classic English pub, which is to say dark and kind of brooding, with Union Jack-ish accents. It’s a little loud, as we would expect from a pub, so plan on lightening up.

Anyway, it’s worth a little noise, because the Downtown Crown Pub puts the lie to the idea that English cuisine is an oxymoron.