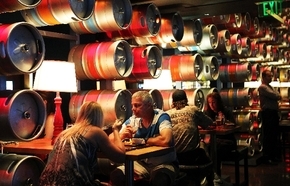 For patrons at these high-top tables, with their corresponding bar-height chairs, seating was just right at Gordon Ramsay Pub & Grill at Caesars Palace. But elsewhere, the seats seemed too low or too high for their corresponding tables, leaving diners seemingly vexed. 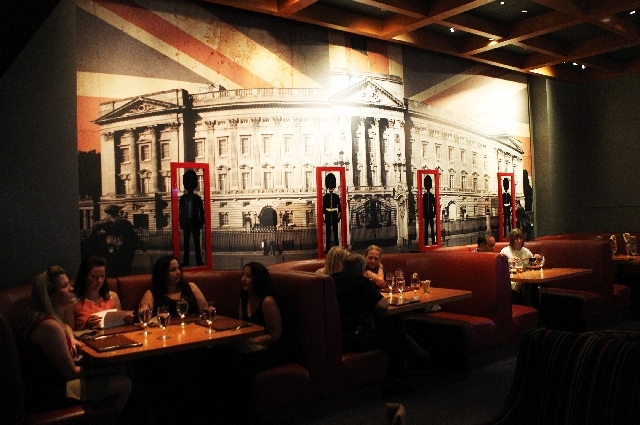 I suffered from Goldilocks syndrome at Gordon Ramsay Pub & Grill at Caesars Palace.

As we were shown to our table, I was pleasantly surprised to see the nice, plush-looking armchairs that awaited us and was sure we’d be comfortable once we’d settled into them. And then I sat down.

Yes, the chairs were quite comfortable; if I’d been curling up for a glass of wine in front of a fire, I’d have been very pleased. As a dining arrangement, however, it was problematic because the table was way too high for the chairs. It wasn’t actually at nose level, but I sure felt like it was.

“How do you like those chairs?” our hale-and-hearty-type waiter greeted us.

“Oh, but you can sink into them,” was his response.

Point missed, but we wouldn’t hold him responsible for someone else’s bad decision. This is the sort of thing I encounter surprisingly often, and something I’ll never understand. Note to management: It’s never enough to be satisfied with how your furniture looks. Try sitting in each style of chair, as it’s paired to each style of table. If you’re not comfortable, your customers won’t be either.

And, well, we weren’t. And I was moved to take a survey of the room, which had a number of furniture arrangements. At every one that had tables and chairs similar to ours, it seemed that people didn’t know quite what to do with their elbows and ended up looking like Papa Bear. In other cases, the tables seemed to be too low for the chairs, and their occupants were sort of hunched over, like Mama Bear. Only at the high-top tables, with their corresponding bar-height chairs, were things just right. Ah, Baby Bear.

This kind of thing is fine in a bar, where customers are apt to settle into any number of positions. For a dining experience, though, it just didn’t work.

Appropriately, considering the rule of threes followed in the Goldilocks story, Ramsay has three restaurants in Las Vegas. His steakhouse, at Paris Las Vegas, is high-end. His BurGR, at Planet Hollywood Resort, is on the opposite end of the spectrum. The pub and grill is designed to supply the middle ground, and it does that quite nicely, with the sort of food you’d be likely to find at those establishments in Britain.

We started with a bread board and accompanying spreads, brought to the table with our water. A crock contained three sticks of salted pretzel bread, wonderfully textured and easy to eat despite the table height because we didn’t really need a plate. The runner said the little crock of cheese was flavored with horseradish but if that was the case it was extremely subtle; this tasted like a classic ale cheese to us. At any rate it was very nice, and soft enough for easy dipping with our pretzel bread. We also were served a small loaf sprinkled with toasted pumpkin seeds, nice with the accompanying butter.

Fish and chips are quintessential pub food, and the Yorkshire Ale Battered Fish and Chips ($26) involved a generous serving of cod, that mild, meaty whitefish that lends itself so well to this preparation. The coating was crisp, shattering into golden splinters, the fish it cloaked moist and obviously fresh, clean-tasting with just a shadow of a briny note. On the side were both a cup of an appealing tarragon-infused tartar sauce and a bottle of malt vinegar, but we really didn’t need either. The fish crowned a mountain of rustic-style fries, and on the side was a little mound of mushy peas, a vegetable beloved of Brits but usually as grayish and unpleasant as the name implies. These, though, were different — bright green, about half mashed, half crisp-tender, and subtly infused with what tasted like a hint of mint.

Shepherd’s pie ($21) was both very like and unlike versions we’ve encountered in actual English pubs. A big difference is that the beef and lamb weren’t ground but braised until they fell into tender shreds, mixed with some cubes of root vegetables and topped with creamy potatoes.

We’d started with a heirloom tomato salad ($16), which was both like and unlike something we’d expect to find in a country pub. The tomatoes had that homespun heirloom quality, which is to say they were rich in both color and flavor, and dressed in just a bit of a light vinaigrette. They were matched by a rather sophisticated mound of goat cheese that had been whipped to a mousselike consistency, the earthy flavor of which played off the tomatoes quite nicely.

Service throughout was fine, our waiter making suggestions when warranted but stopping short of being overbearing.

The grill and bar has a nice energy, with flat-screen televisions throughout showing sports events and music that’s just loud enough to enjoy. Accents of wood, brick and Union Jacks are sprinkled throughout. It all sounds cozy, and for the most part it is.

We were tempted to hang around for some of Ramsay’s rhubarb crisp, but we were just too uncomfortable.