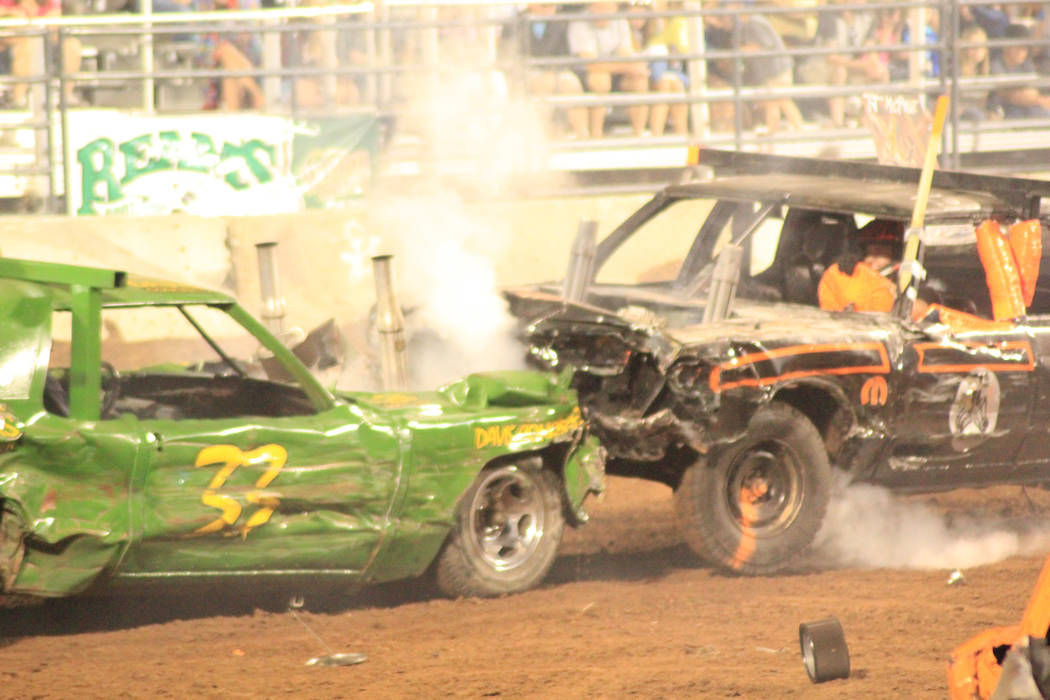 A shot of the high-collision action at a Stirrin' Dirt Racing event. The demolition derby is debuting March 29-30 at the Plaza in downtown Las Vegas. (Stittin' DIrt Racing) 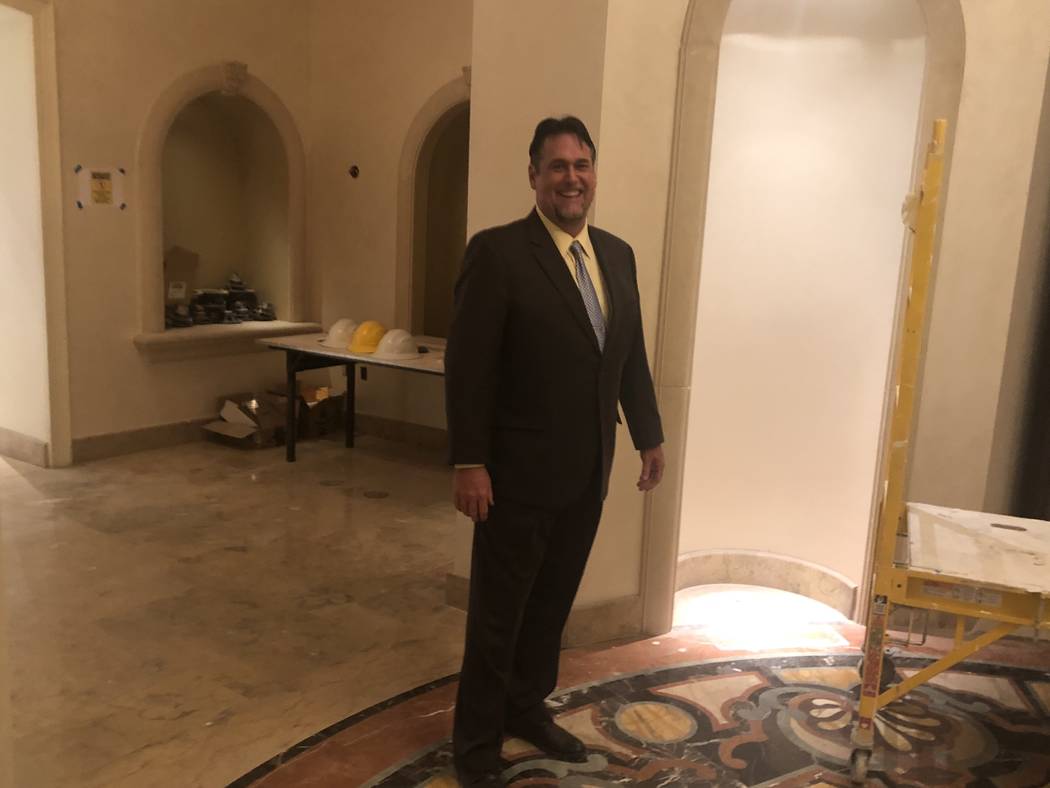 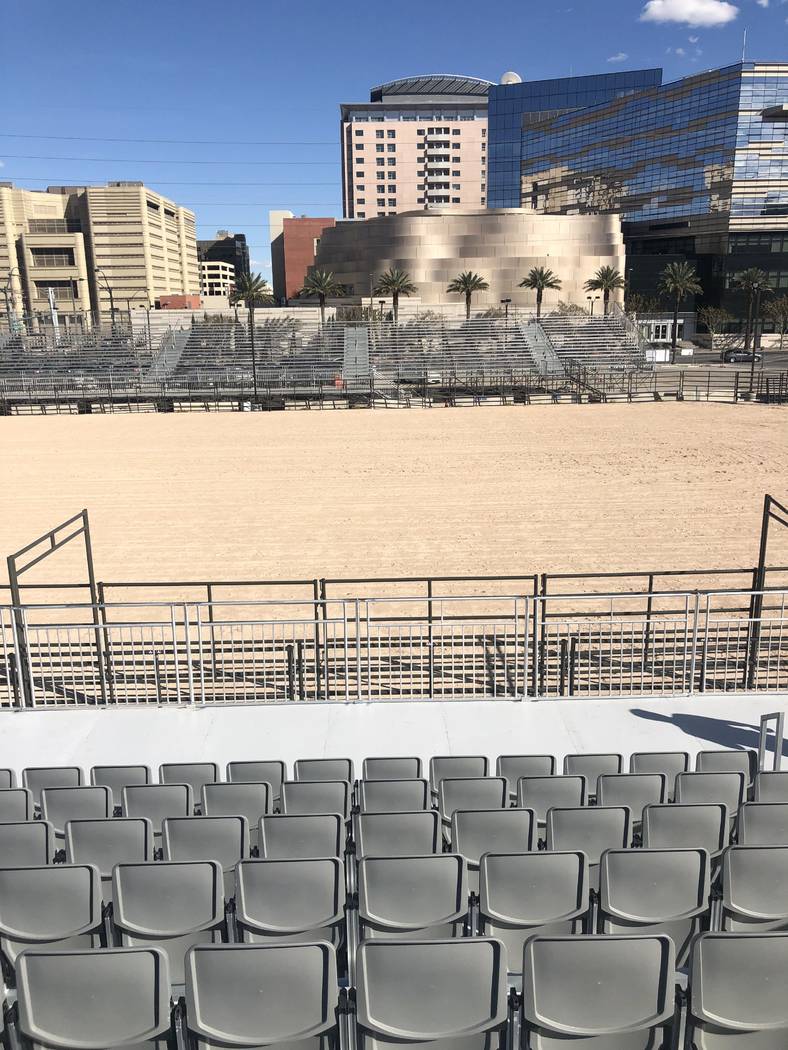 A look at the setup at Core Arena at the Plaza, the site of Casino Battle Royal Demolition Derby, set for March 29-30. (Jonathan Jossel)

The Kats! Bureau at this writing is Stirling Club at Turnberry Place’s March Mania party. I’m writing, watching college hoops and enjoying the fizzywater at club’s lounge. The wood flooring and furniture are new and the place is coming together nicely ahead of its formal opening. No date set but that should happen in June.

Earlier, Carolyn Swords of the Las Vegas Aces made her way through the party annex. Equal measures tall and friendly, Swords has lived in Vegas for about a year and loves it. She used the word “jealous” to describe visiting WNBA players’ feelings about playing in this city.

Aces head coach Bill Laimbeer was supposed to be on the scene, too, but couldn’t make it because of illness. I was really hoping to hang with him and chat him up about the Detroit Pistons’ Bad Boys era. Maybe he can jab me with a ceremonial elbow to the ribs as the Aces open their season May 26 against the Los Angeles Sparks at Mandalaly Bay Events Center.

These two are the first non-entertainment figures booked at the club since owner Richard Ditton and Stirling Club President Debra Kelleher took over operations last year. The formal opening will be later this spring, but the hoops party is ongoing through Sunday (open buffet and bar, single-day tickets $60, go to www.stirlingclublv.com for info).

Aaaaaaand, the fire alarm was just tripped. A sure sign to keep writing.

Plaza has the recipe for a winning entertainment lineup: Collision contests and Cuban comics.

“Vivir del Cuento,” featuring four top stand-ups from Cuba, sold out at 600 tickets at Plaza Showroom on Thursday night. The show set a single-night bar sales record of $12,000 — even half that number is a strong night for a showroom comedy performance in Las Vegas.

To quote one longtime Vegas lounge and showroom headliner, upon hearing this news: “What!?”

It helped the bottom line that doors (and the bar) opened at 8 for a 10 p.m. show. I guess it was some kinda party.

Up next at Plaza at Core Arena is the Casino Battle Royale Demolition Derby, set for March 29-30 and staged by predominant collision-competition company Stirrin’ Dirt Racing. The inaugural event has nearly sold out the 2,000-seat venue (tickets start at $30) and is believed to be the first-ever event of its kind in downtown Las Vegas.

“When you tell people that we are having a demolition derby downtown, their faces light up,” Plaza Chief Executive Officer Jonathan Jossel says. “We should sell out in the next few days and we have fielded a lot of inquiries about this event. From 3 p.m.-7 .m., we will have middle America downtown, and a lot of locals, too.”

Billed as a family friendly event. the Casino Battle Royale is split between two classes: Mini Cars (1980s and ’90s front-wheel-drive, foreign and domestic cars) and Stock Class (stock-built beauties out of Detroit).

“We saw the first 100 car and driver registration slots fill up in less than three minutes,” Jossel says. “You’ll see a new champion crowned each night.”

Jossel also plans an after-party under the Plaza’s lighted dome at its main entrance. His team at the Plaza scouted Stirrin’ Dirt Events in Utah before being convinced the event could succeed in the same neighborhood as the Mob Museum.

“The Casino Battle Royale combines the rough-and-tumble world of rodeo with the speed and excitement of a racing event, all mashed up into a heavy-metal, full-throttle, twisted-steel, legal-road-rage event at the Plaza,” says Johnny Gullo, principal partner of Stirrin’ Dirt Racing and a man who seems on a collision course with hyperbole.

Jossel says this event could well lead to another Stirrin’ Dirt Racing event in the fall, though no final decision will be made until after the inaugural event.

“When you look at what this event has already meant to us, it opens the possibility of many extreme sports at Core Arena,” Jossel says. “Motorcycles, monster trucks, BMX — the sky’s the limit.”

Hey, this hotel official is all, um, geared up. Find him a ride.

Zak Bagans is delving into a fortress in his hometown for the next episode of “Ghost Adventures” at 9 p.m. Saturday on Travel Channel.

Bagans is checking out the spirits at the legendary Binion’s casino on Fremont Street. The 25-story hotel tower has been abandoned for about a decade. Bagans, whose Haunted Museum sits near the corner of Charleston and Las Vegas Boulevards, is also canvassing Hotel Apache downtown.

From Donny and Marie Osmond, in their first show back Thursday after announcing there show at Flamingo Las Vegas would be closing in November after an 11-year run. “This show has been like playing craps,” Donny said, “and her part is crap.”

Marie’s answer: “But I’m the payoff!” That’s improvised. The crowd loved it and it’s staying.

Morales on the scene

Natalie Morales of “Today” on NBC was at Thursday’s D&M show and also tailed the duo to their appearance to T-Mobile Arena, where they cranked the siren before the Golden Knights-Winnipeg Jets game. Morales interviewed the star siblings Thursday afternoon for a segment airing Monday morning.

Celine Dion reposted a photo of her in a vehicle with “Late Late Show” host James Corden on Friday afternoon. Yes, she is going to be on his wildly popular “Carpool Karaoke” segment about three weeks before she closes her run at the Colosseum at Caesars Palace on June 8.

Rachel Wolfson is a top club comic hosting at Laugh Factory at the Tropicana from Monday through March 31. Wolfson, who lives in L.A., is also well-known in Las Vegas legal circles. Her mother, Jackie Glass, is the former District Court judge who sent O.J. Simpson to state prison after his robbery conviction in the 2007 Palace Station memorabilia-retrieval debacle. Wolfson’s father is Clark County District Attorney Steve Wolfson.

It’s a fitting bio. At the Laugh Factory, you get a verdict, real quick.

Bono’s got the bread

Dennis Bono, the veteran crooner and host of his own simulcast variety show at South Point Showroom, is expanding his podcast to over-the-air radio.

“Breakin’ Bread With Bono,” which originates from Celebrity Table 30 at Bootlegger Bistro (owned by Bono and his wife, Lorraine Hunt-Bono), is now airing from 5 p.m.-6 p.m. Saturdays on KDWN 720-AM and 101.5-FM.

The show premiered in August with Frankie Scinta, and Bono has chatted with such Vegas luminaries as Rich Little, Shecky Greene, George Wallace, Tony Orlando, Crystal Gayle and Sonny Charles of the Checkmates.

What this means, in part, is we need a home-and-home with “Breakin’ Bread” and “PodKats!”