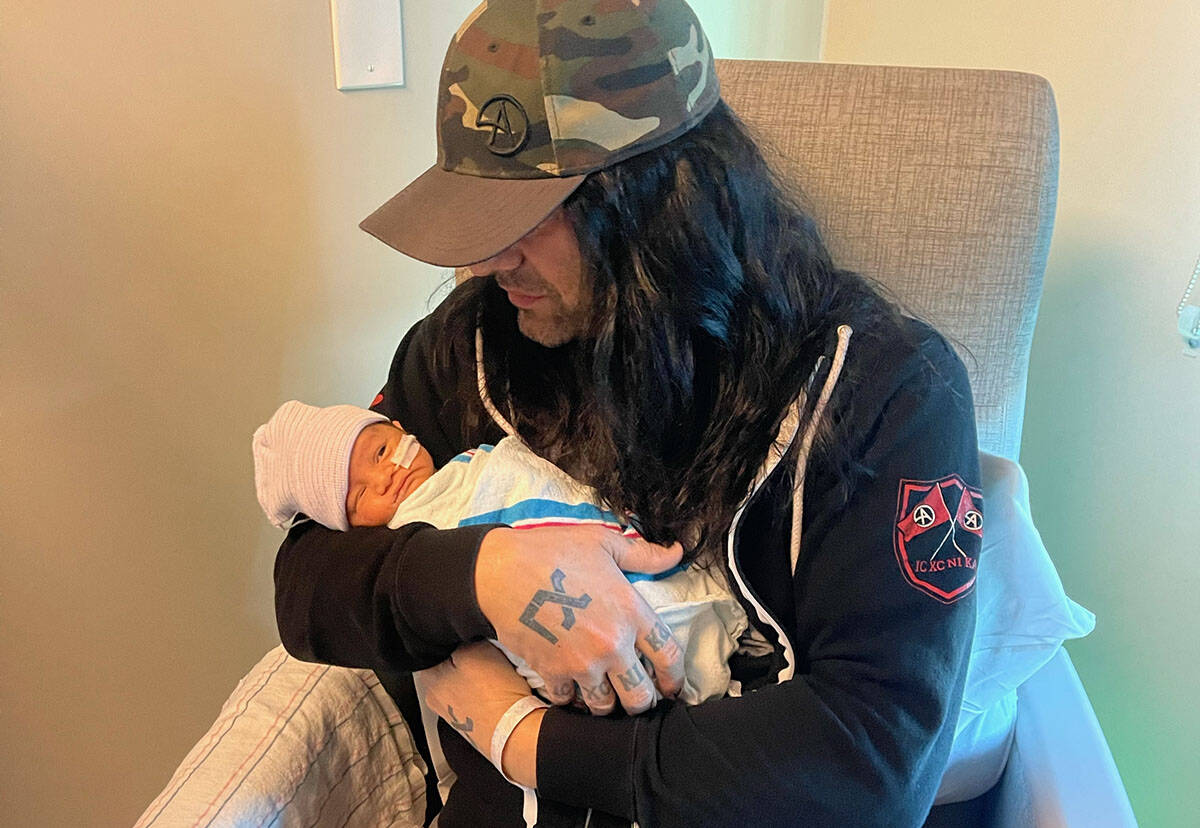 Criss Angel and his daughter, Illusia, are shown during the baby's hospital stay on Monday, Nov. 13, 2021. The little girl was born a month prematurely on Nov. 5. (Criss Angel) 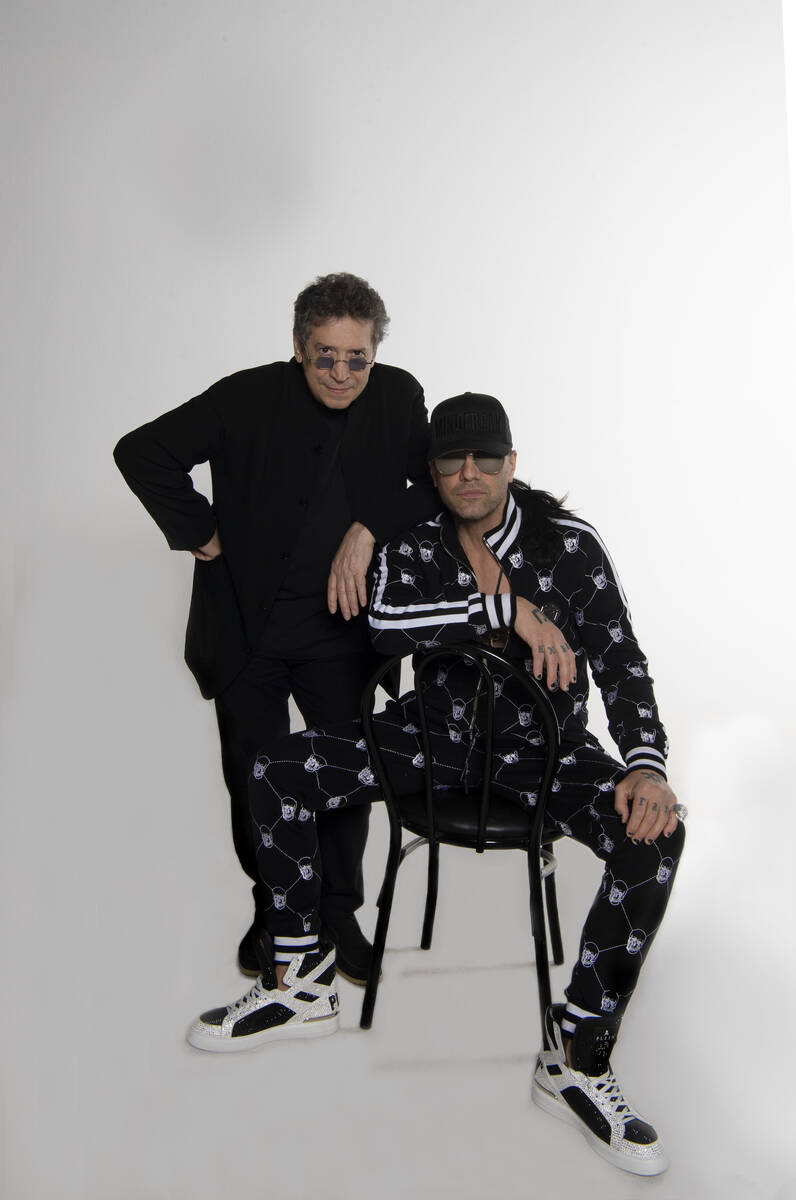 Criss Angel and Franco Dragone are teaming on "Amystika -– The Secret Revealed," opening in late-December at Planet Hollywood. (Denise Truscello)

Sometimes, you bow to the illusionists. This sleight-of-sentences is all about magic:

Two-week-old Illusia Angelina Sarankatos is already eager to hit the Strip. This is from the baby’s father, Criss Angel.

The Planet Hollywood headliner posted a message on social media last week that Illusia, who was born a month premature on Nov. 5, is doing well after several days in the NICU. The little girl made it home Friday. She and the mom Angel’s wife, Shaunyl Benson, are holding up all right.

“We are so excited about the progress for Illusia Angelina. She’s doing amazing. She is totally healthy now,” Angel said in a social-media post Monday. “Everything is fantastic and we just want to say thank you so much for the love and prayers, and she’s already told me she is so excited to be at the premier of of “Amystika” Dec. 27th, get your tickets now.”

That plug is an indication the Angel/Sarankatos family is in good repair. “Amystika — The Secret Revealed” is the prequel of the “Mindfreak” stage show at Planet Hollywood. The nightclub concept is a partnership between Angel and the distinguished producer Franco Dragone.

The project was announced as “Mr. Smiles & Molly.”

The production has cast an array of artists, including contortionists and bone-breakers, circus oddities, seductive female artists, those with unique dancer skills (such as fire manipulating), female dancers, physical comedians and character artists. The show promises “a euphoric, enigmatic world that pushes the boundaries of reality like never before as a real firestorm ignites and engulfs a human body, a tornado rages through the theater and a blizzard of snow falls so heavy it challenges the audience to see their own hands.”

“No pre-show gags, no banter, no old-fashioned theatrical ceremonies,” Dragone says. “Here, you will dive into a world that will take you by storm!” OK, bring it on, Baby.

Lance Burton, forever the Master Magician in Las Vegas and everywhere else, makes a special appearance at 6:15 p.m. Nov. 27 to benefit Opportunity Village and Variety the Children’s Charity of Southern Nevada. The show is his “Lance Burton & Friends” format, with Fielding West, Michael Goudeau and Keith West co-starring. Tickets are $20 for the show, or $35 for a combo show-Magical Forest visit.

Burton moved back to the family farm in Kentucky in November 2020. He has not performed a ticketed show in Las Vegas since headlining at the Orleans Showroom in November 2018. He left Monte Carlo, today’s Park MGM, in September 2010, ending a 14-year run in his eponymous theater.

“This is a completely different show than what I did in Las Vegas for the last 20 or 30 years,” Burton says. “I’m doing some of my favorite magic, big illusions, sleight of hand, audience participation, and I’m bringing some of my best friends with me. And there’s a lot of comedy, a lot of magic, juggling, and we have a little something for everybody.”

“This is a completely different show than what I did in Las Vegas for the last 20 or 30 years,” Burton says. “I’m doing some of my favorite magic, big illusions, sleight of hand, audience participation, and I’m bringing some of my best friends with me. And there’s a lot of comedy, a lot of magic, juggling, and we have a little something for everybody.”

It wasn’t until Farrell Dillon slipped the multicolored thimbles on his fingers that we recognized him from “Masters of Illusion” from 2018 at Bally’s Jubilee Theater. Same hotel, different room, more responsibility for the accomplished entertainer in The Magic Attic. Dillon has settled into the 6 p.m. time slot (dark Mondays).

Dillon’s show is fine for all ages, even youngsters. That includes the little girl behind us the other night who kept calling out, “Make it purple!” to pretty much every one of Dillon’s routines. He’s a classic magician, ebullient, skilled and engaging. You can take your 8-year-old nephew to this show, and I plan to.

Dillon’s production is the first from the new Vegas entertainment collab of John Bentham’s Ivory Star Productions and former Caesars Entertainment executive Damian Costa’s Pompey Entertainment outfit. What these three have in common, other than they all have an affinity for magic, is RV travel. Really. They all own RVs and are known to tool around the country. But we anticipate Dillon will be parked here for a spell.

We call this illusionist Rolex the Magnificent. Because you continually need to check to make sure he hasn’t pilfered your watch.

The anonymous, sleight-of-hand genius is the star and sole performer in The Magician’s Study, which performs at 7 and 9 p.m. Thursdays, Fridays and Saturdays at an undisclosed location. The only way to find this performance is by linking to themagicansstudy.com.

I caught the show, or it caught me, when it premiered a couple weeks ago. Fellow Vegas scenester Sam Novak of Vegas 411 and Drai’s Nightclub vice president of marketing and entertainment Dustin Drai wereamong the invited guests.

The room seats eight, total. The performances include an array of mind-blowing card tricks, a silk that zips across the study and into an oversized bottle, extensive coin-on-felt artistry and the re-assembly of a $100 bill (or, $5 as was the case in the show I caught).

This secret presentation originally cropped up in 2017, at The Artisan, and the plan is for the cloaked illusionist to hopscotch the performances around town.

It is worth allowing “Rolex” to steal some time, even if it means losing your timepiece for a time, because he’ll take that, too.

Magician Murray Sawchuck and his wife, Dani Elizabeth, are featured quickly in the first episode of “The Tiger King 2” which premiered Wednesday. The Vegas couple are shown playing with cubs along with Jeff Lowe and his wife, Lauren, at the Greater Wynnewood Exotic Animal Park in Oklahoma in May 2020. Sawchuck still holds hours of footage from that visit and has toyed with the idea of editing it as a documentary.

Former Blue Man Group and Angel guitarist from Angel’s Luxor show Elvis Lederer’s Unique Massive band rocks Sand Dollar Lounge from 10 p.m.-2 a.m. Saturday. The band has kicked around for about 18 years. The current lineup is aces all around: Matt Green (keys), Ryan Krieger (drums) Mike Gonzales (trumpet) and Jason Langley (bass). As Lederer says, “Unique Massive is a band that brings musicians from the local scene together, and takes you on a sonic journey by pulling from creative forces that are unique to the moment.”