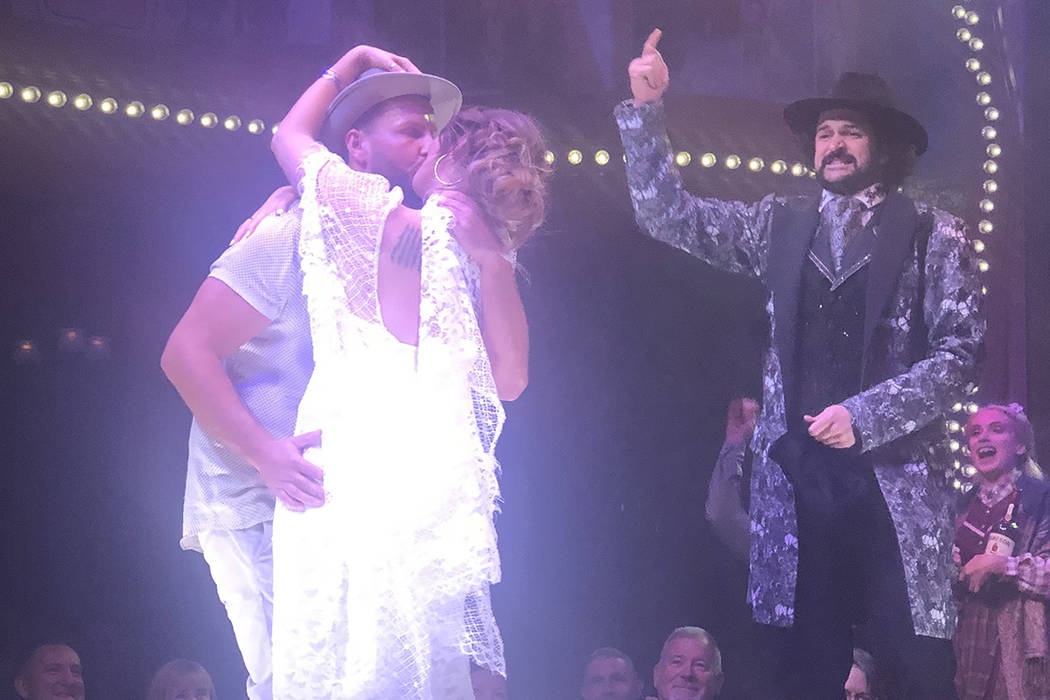 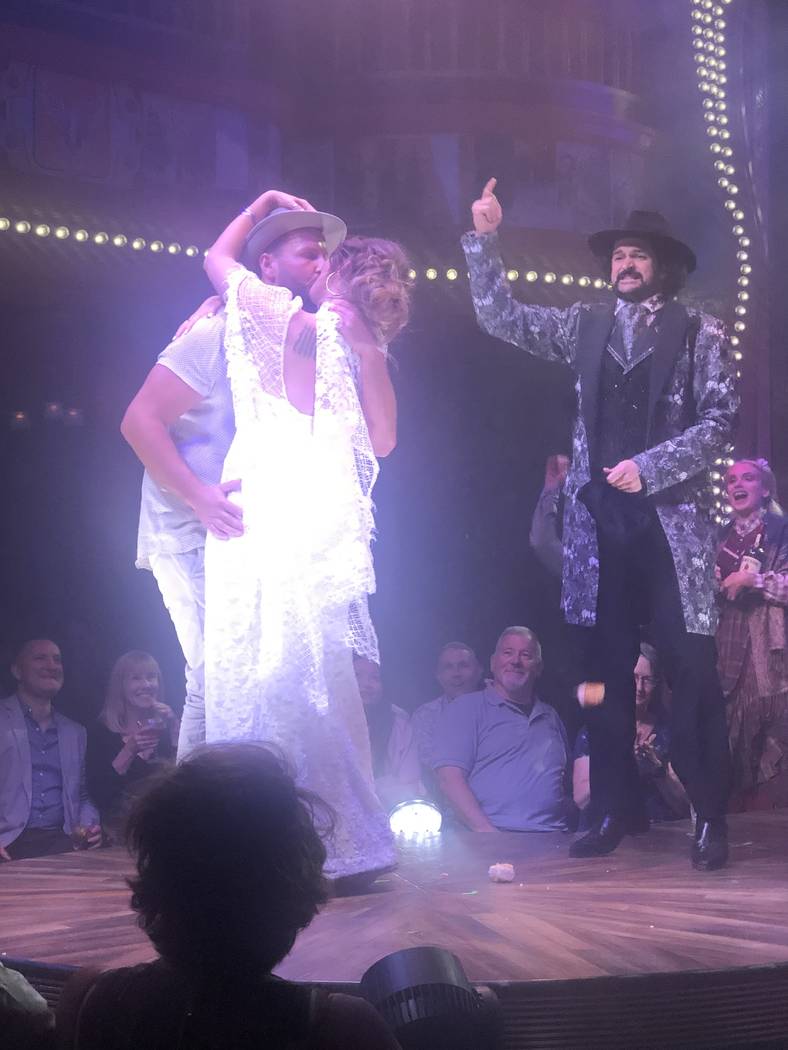 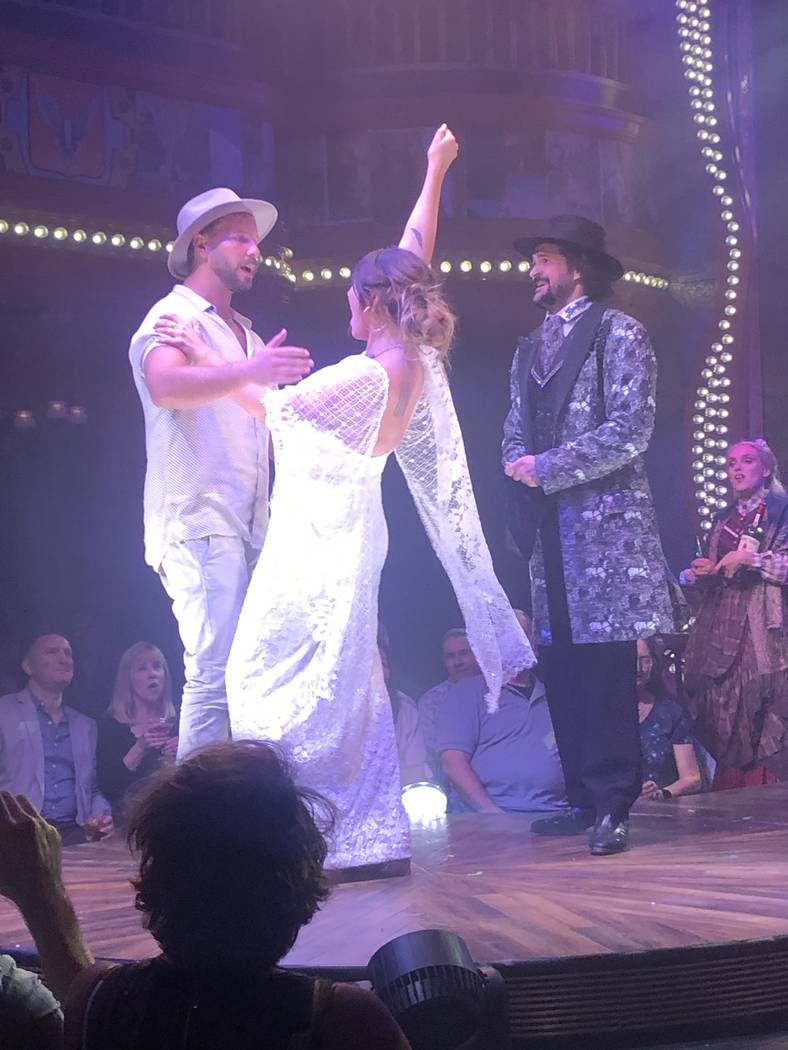 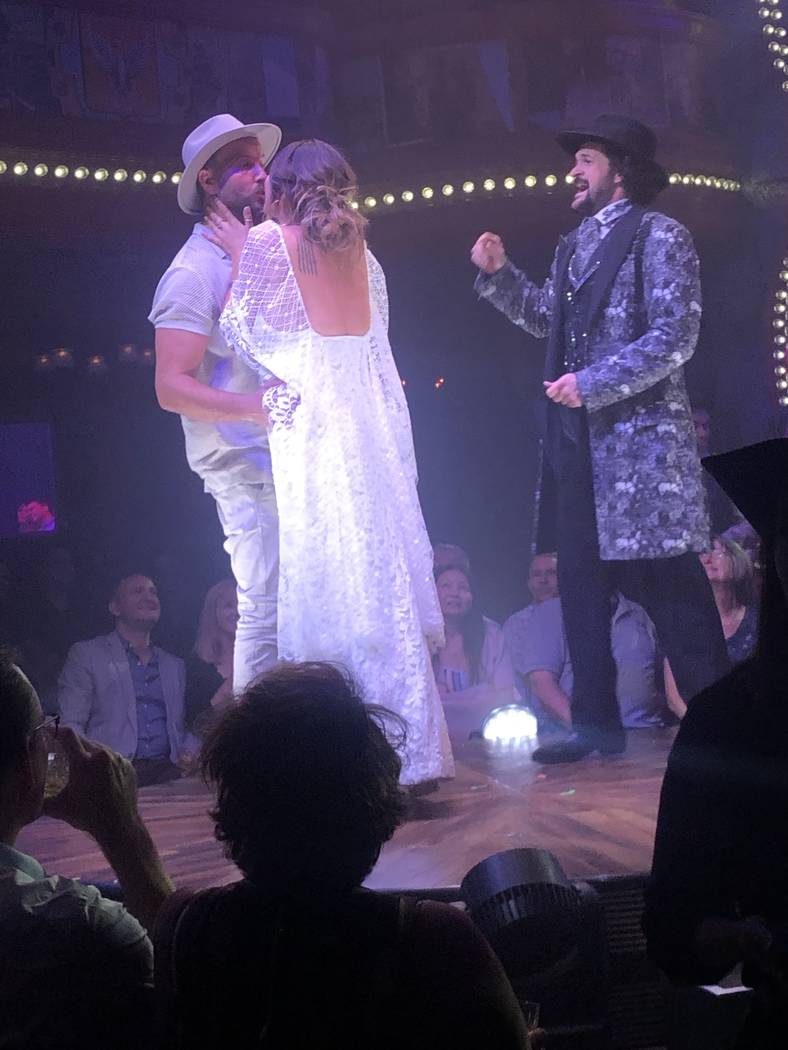 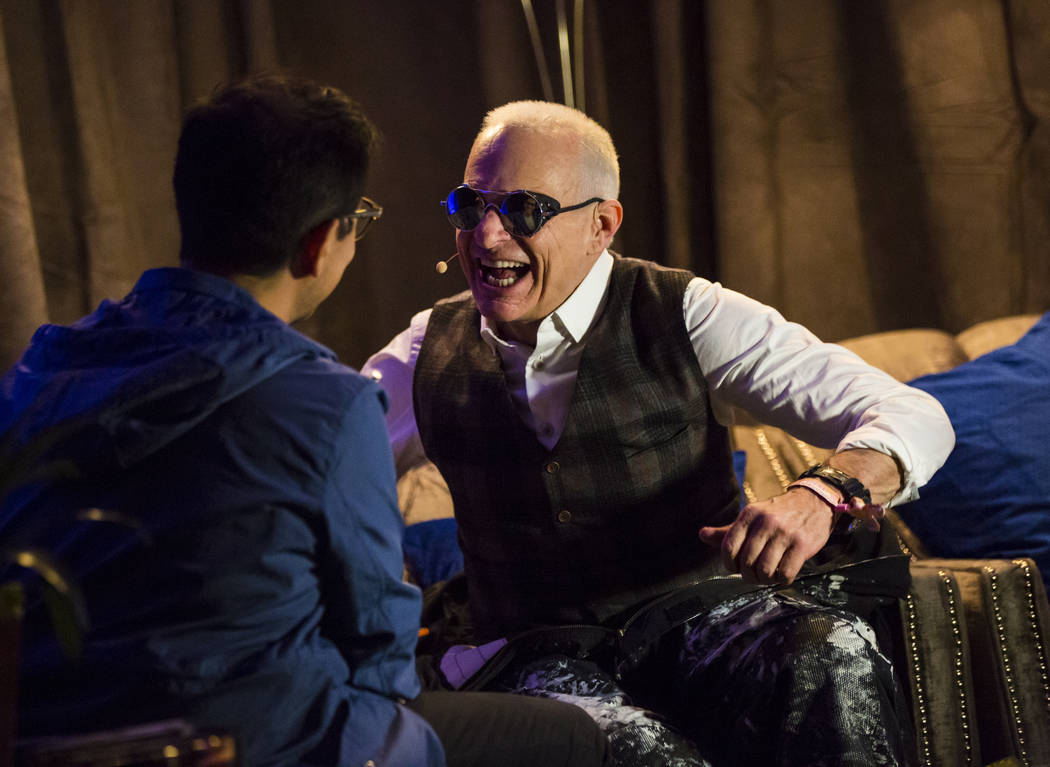 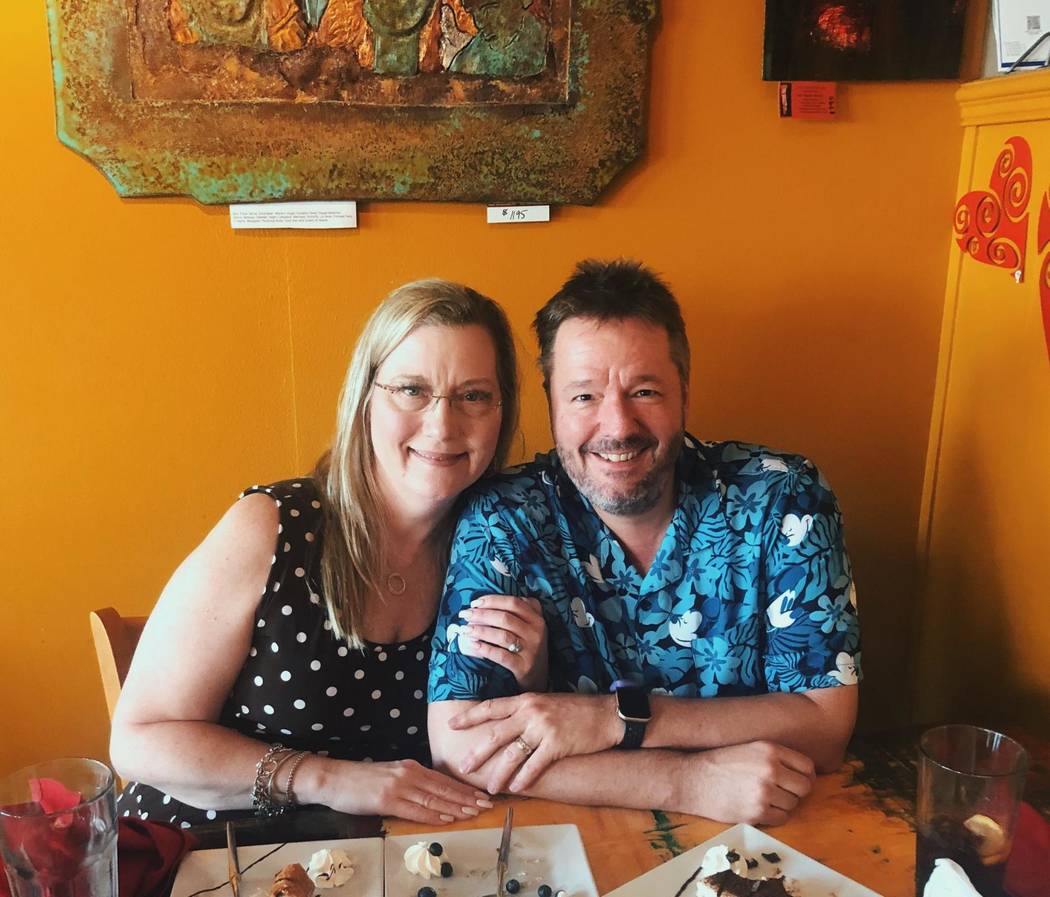 Reverend Peabody strode to center stage in the Las Vegas Strip’s newest saloon and shouted, “This is not part of the show!”

Maybe not. But the wedding ceremony for Scottish tourists was a spectacle unto itself Sunday at the preview opening of “Atomic Saloon Show.” Sam Larg and Kate Carter of St. Andrews, Scotland, were the blushing couple who were married at the new Atomic Saloon at The Venetian’s Grand Canal Shoppes.

Sam and Kate had seen a performance during the show’s debut at Edinburgh Festival Fringe, where they had set up one of their Cheesy Toast Shack stands.

“We saw the show and came out of it and were talking about it to our friends, ‘Oh my God, it was amazing! We should go to Vegas and see it!’ We’ll have a holiday in Vegas and get married there!’ ”

Sam and Kate were with a group of friends in a VIP booth near the stage in the renovated venue, formerly home to The Act nightclub. They have been a couple for years, have a baby together and share in their cheese-focused business.

The wedding ceremony, carried off just before the show’s opening number, was something of a lark.

Our first preview began with a bang last night—and a wedding! After seeing #AtomicSaloon at @EdFringe in August, the proprietors of @thecheesytoastshack, Sam and Kate, were inspired to fly to Vegas to see us again—and get married at the same time. To their surprise, Rev. Peabody performed the ceremony on the spot. #loveisintheair #vivalovevegas #saloonatics #atomicsaloonshow

“There are 15 of us who wanted to come here anyway,” Kate said. “So we all just booked it for a party amongst friends.”

The couple said the ceremony was indeed legally binding. There was word that comic actor Damien Warren-Smith, who portrays the Reverend, went online this weekend to become an ordained minister.

Even so, “Atomic” producer and Spiegelworld founder Ross Mollison said only, “I don’t know who Damien is, but Reverend Peabody of course can perform weddings.”

Somehow it seems this won’t be his last.

On the topic of married couples in Las Vegas. …

Mirage ventriloquial headliner Terry Fator and is wife, Angie, celebrated their fourth wedding anniversary on Sept. 3 with dinner at Pasta Shop Ristorante in Henderson. The number of desserts enjoyed (three) outpaced the number of puppets at this party (zero).

Diamond Dave in the house

He told a sold-out crowd at MGM Grand Garden Arena in May 2012, “I am Professor Rock, and I will be your instructor for the rest of the concert!”

We speak of the one and only David Lee Roth, who is rolling into House of Blues at Mandalay Bay for nine shows opening Jan. 8 (Elvis’s birthday!) and running through March.

You might remember, or not, that Roth actually headlined a six-night engagement in October 1995 at Bally’s legendary Celebrity Showroom. The venerable Van Halen frontman headed up a musical variety show with a 15-piece band (with Edgar Winter on sax) for 700 folks in a venue that seated twice that.

Roth sang just two Van Halen Songs, “Jump” and “Ice Cream Man,” along with an encore of “Just a Gigolo/I Ain’t Got Nobody” in a show that was soon — but not entirely — forgotten.

Defying death with every passing day, The Amazing Johnathan turned 61 on Monday. He and his wife, Anastasia Synn, stayed home and relaxed.

During a quick chat in New York after he closed his Broadway run, Barry Manilow said he wanted to be a headliner at Westgate’s International Theater for as long as the resort would have him. Resort execs, in turn, say they want Manilow for as long as he wants to headline the main room.

Westgate General Manager Cami Christensen happens to be a Fanilow, dating to Manilow’s residency at the then-Las Vegas Hilton from 2005-2010. The resort exec has collected a series of videos recorded during “Can’t Smile Without You,” including clips of Westgate owner David Siegel and her parents, Dave and Merilee Christensen. I am in one of these clips, too. One day that video montage might be displayed during the show. One can dream.

Famed Vegas odds-maker and gaming writer Roxy Roxboro posted on his @RoxyLasVegas Twitter page: “The 50 dollar bill is anathema to old-time gamblers like me. Similar to Robert Louis Stevenson’s Black Spot, they are considered the kiss of death. It was only a few years ago I would even touch one.”

The 50 dollar bill is anathema to old time gamblers like me. Similar to Robert Louis Stevenson's Black Spot, they are considered the kiss of death. It was only a few years ago I would even touch one. pic.twitter.com/lq87GirGIe

A lot of classic references in that post, folks.

Some Celentano-esque hang action is in store Wednesday at Rocks Lounge at Red Rock Resort and this weekend at South Point Showroom.

At 7 p.m. Wednesday, musician brothers Jon and Jeff Celentano lead a voyage on their “Pleasure Cruise” yacht-rock tribute. This outfit plays the buoyant hits from Christopher Cross, Michael McDonald, Kenny Loggins and other wavy rockers. The show is filled with a hot (hot, I tell you!) lineup of musicians: of Rick Duarte (bass/vocals), Shaun Flannery (drums/vocals), and Rob Stone (sax). No cover charge, no kidding, for this one.

At 7:30 p.m. Friday, Saturday and Sunday the brothers Celentano are in “Good Vibrations: A Celebration of the Beach Boys,” which specializes in that legendary band’s surf hits. Vegas faves Jared Dalley (guitar/vocals) and Taylor Sinquefield (vocals) fill out the lineup.