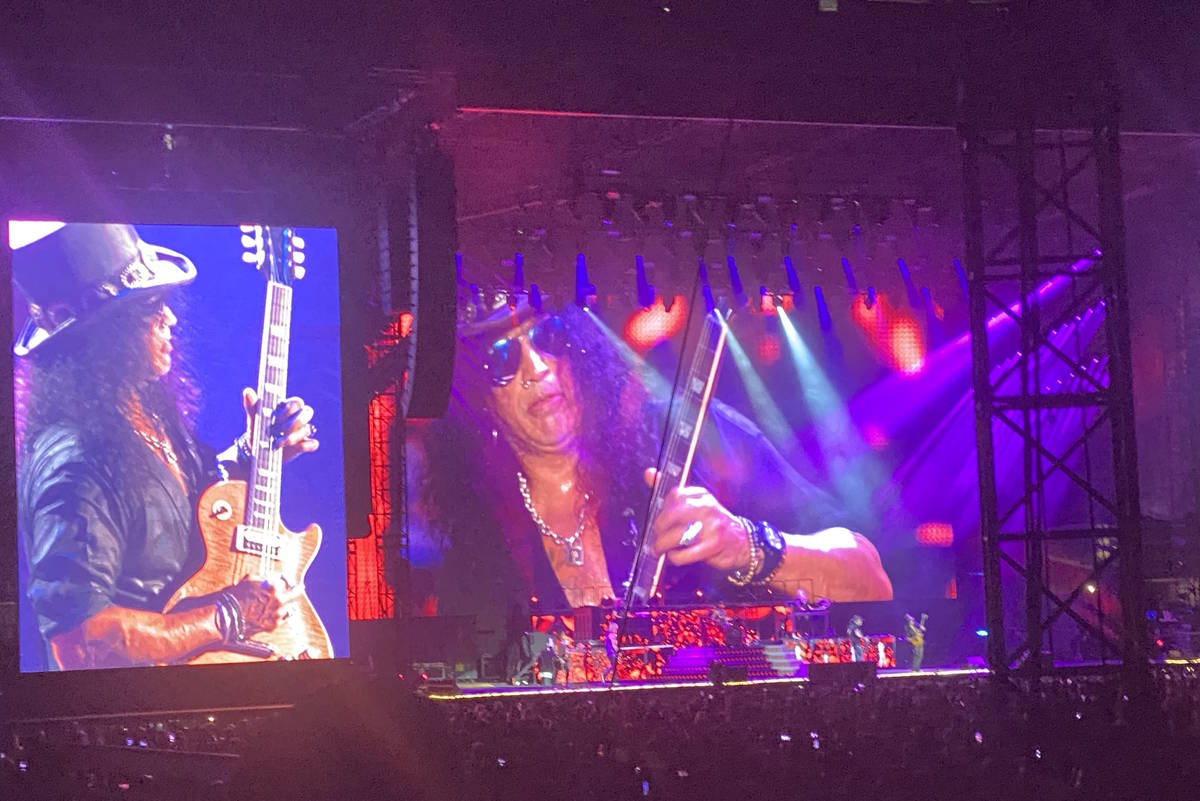 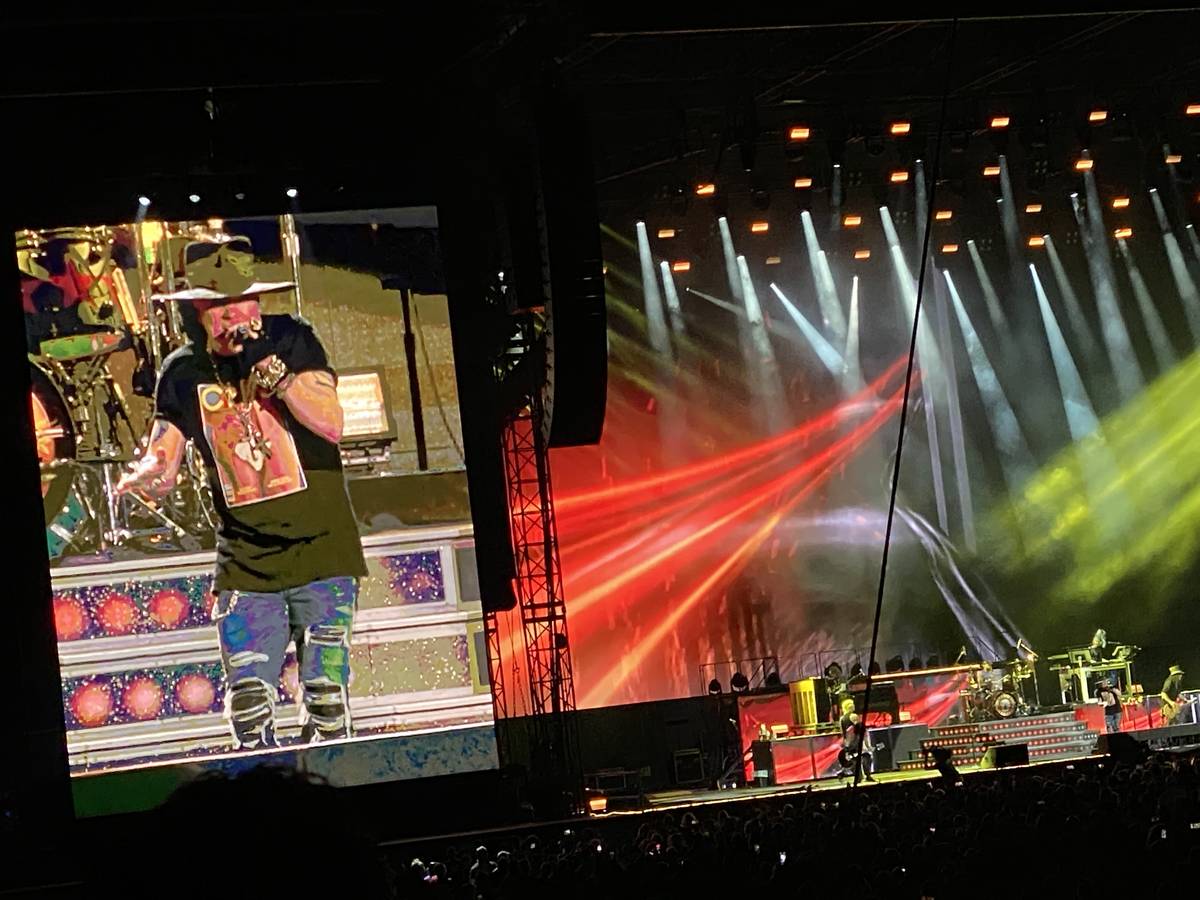 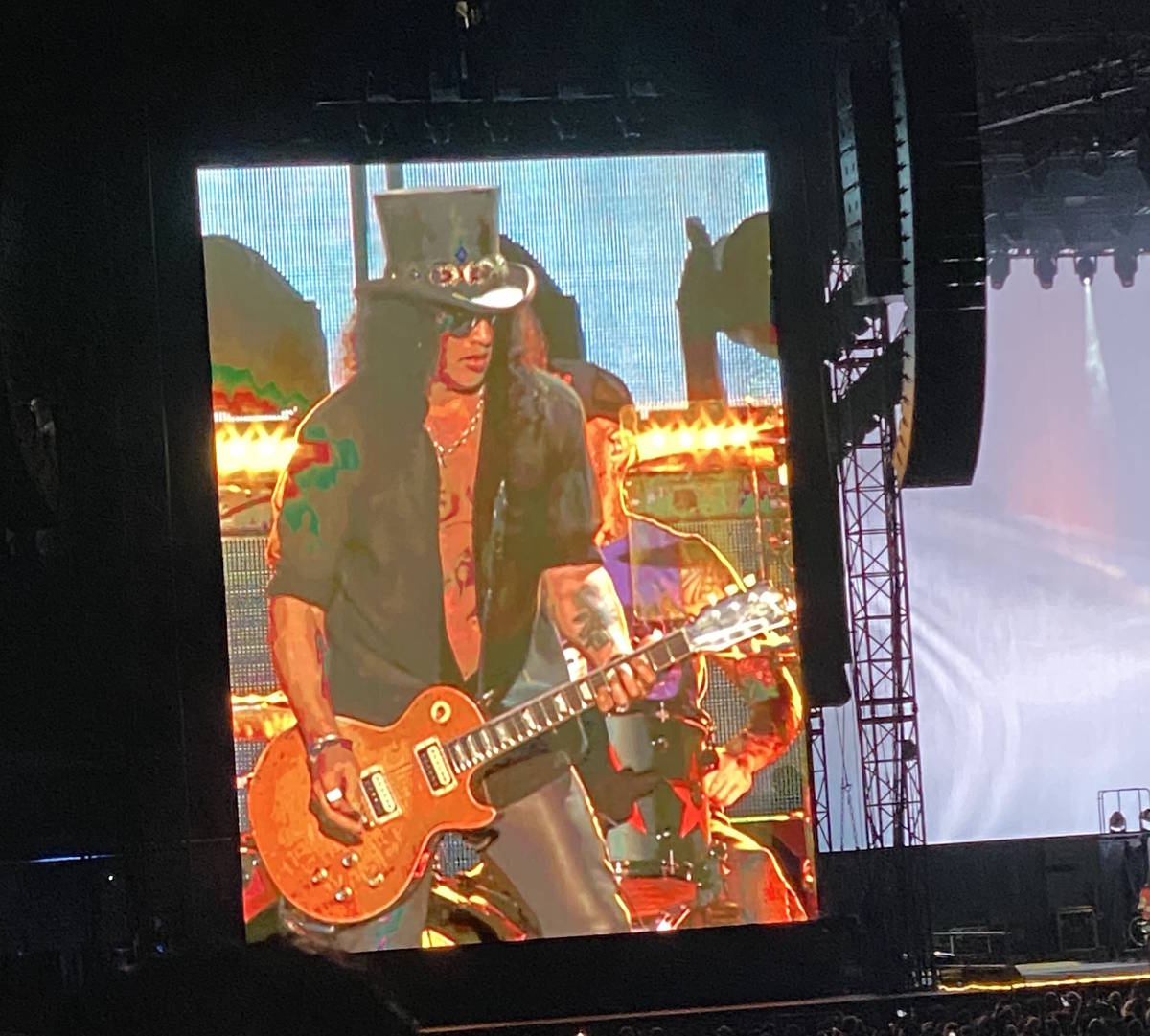 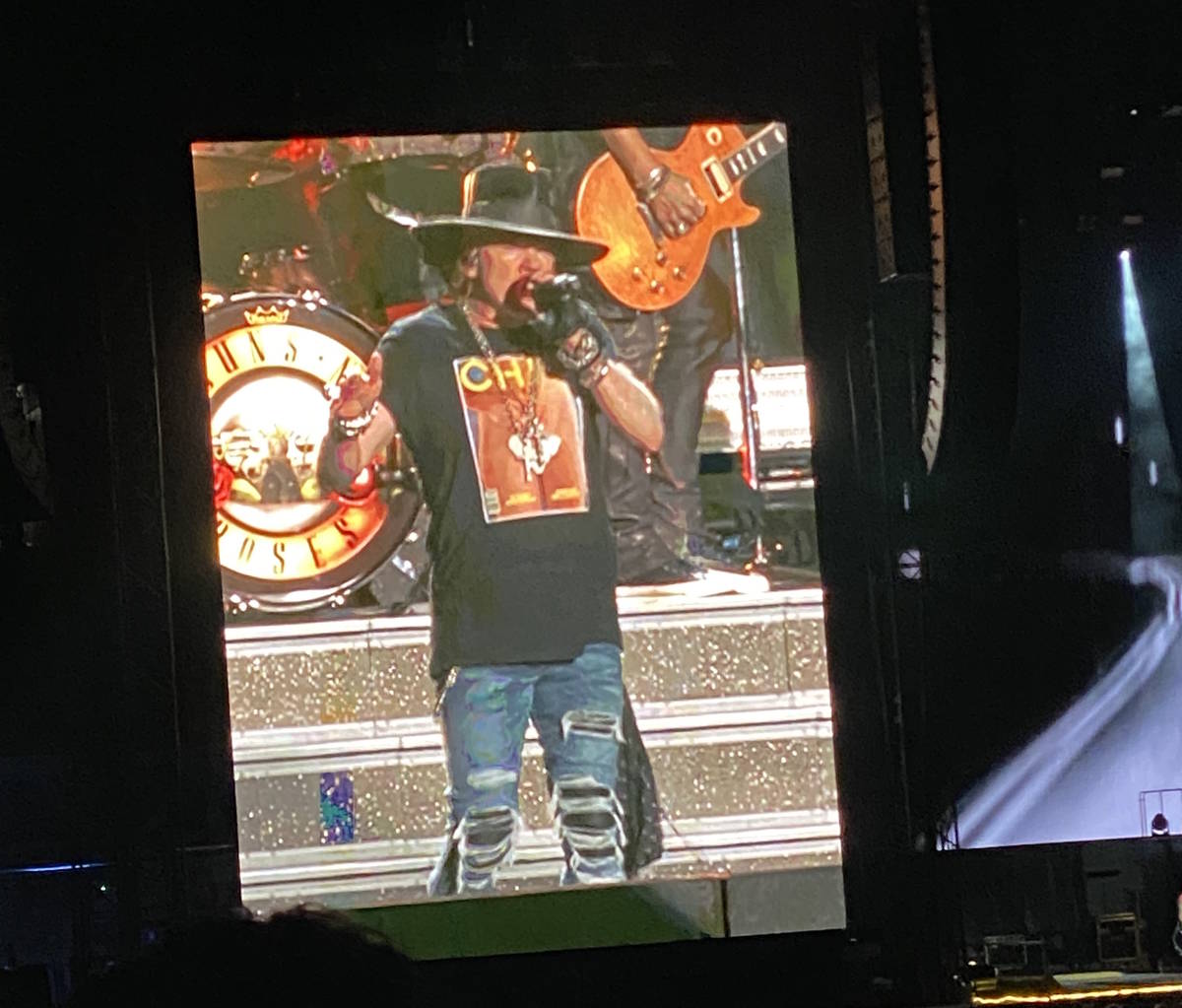 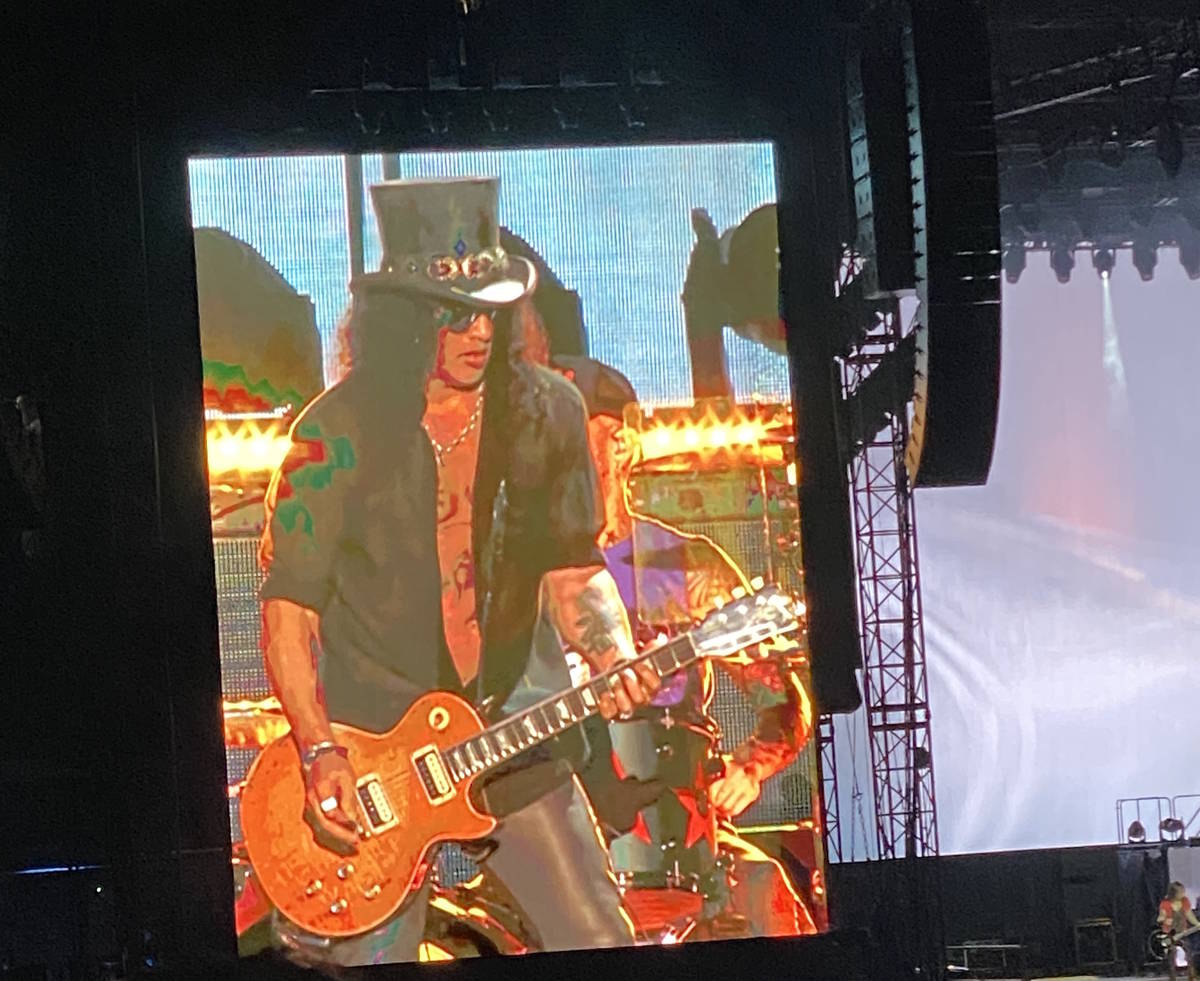 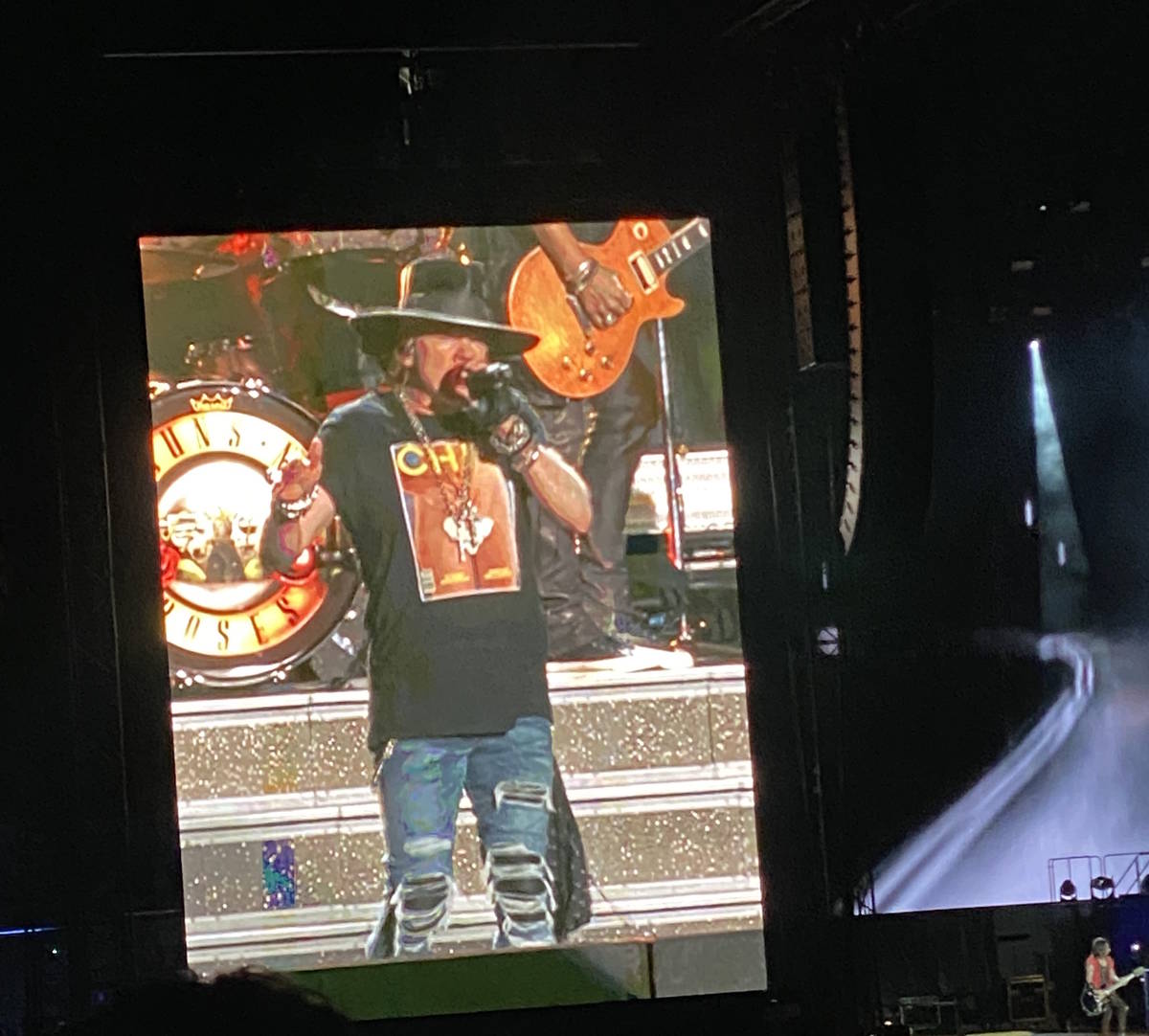 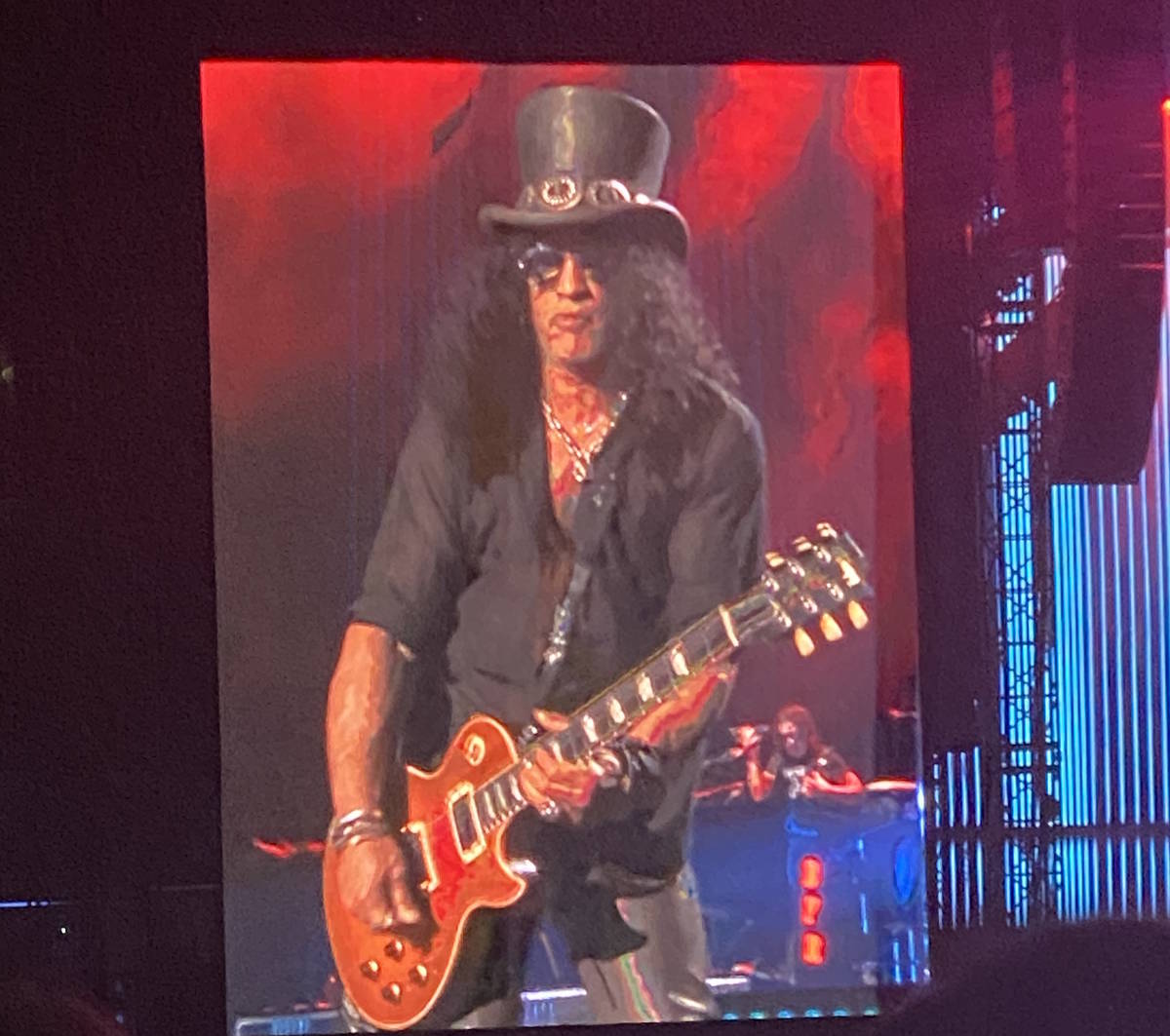 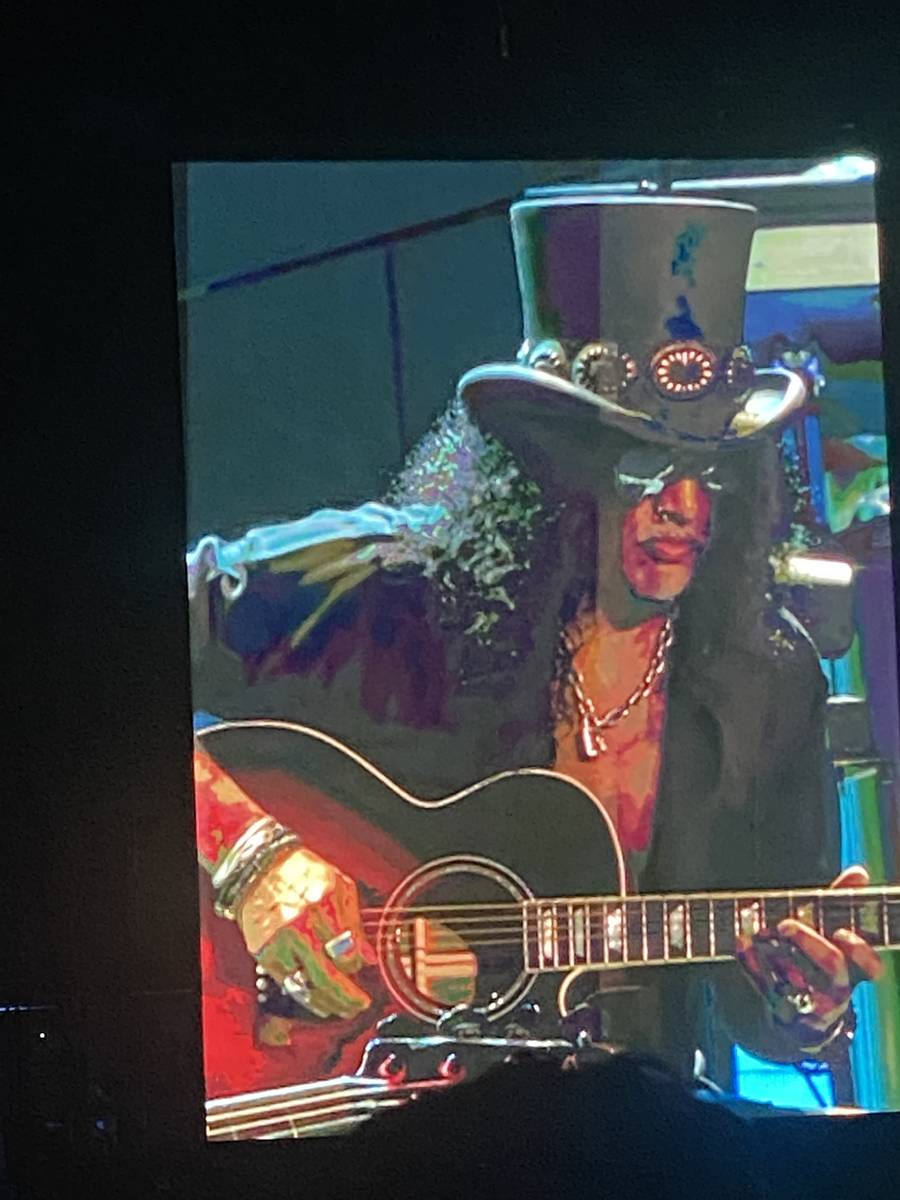 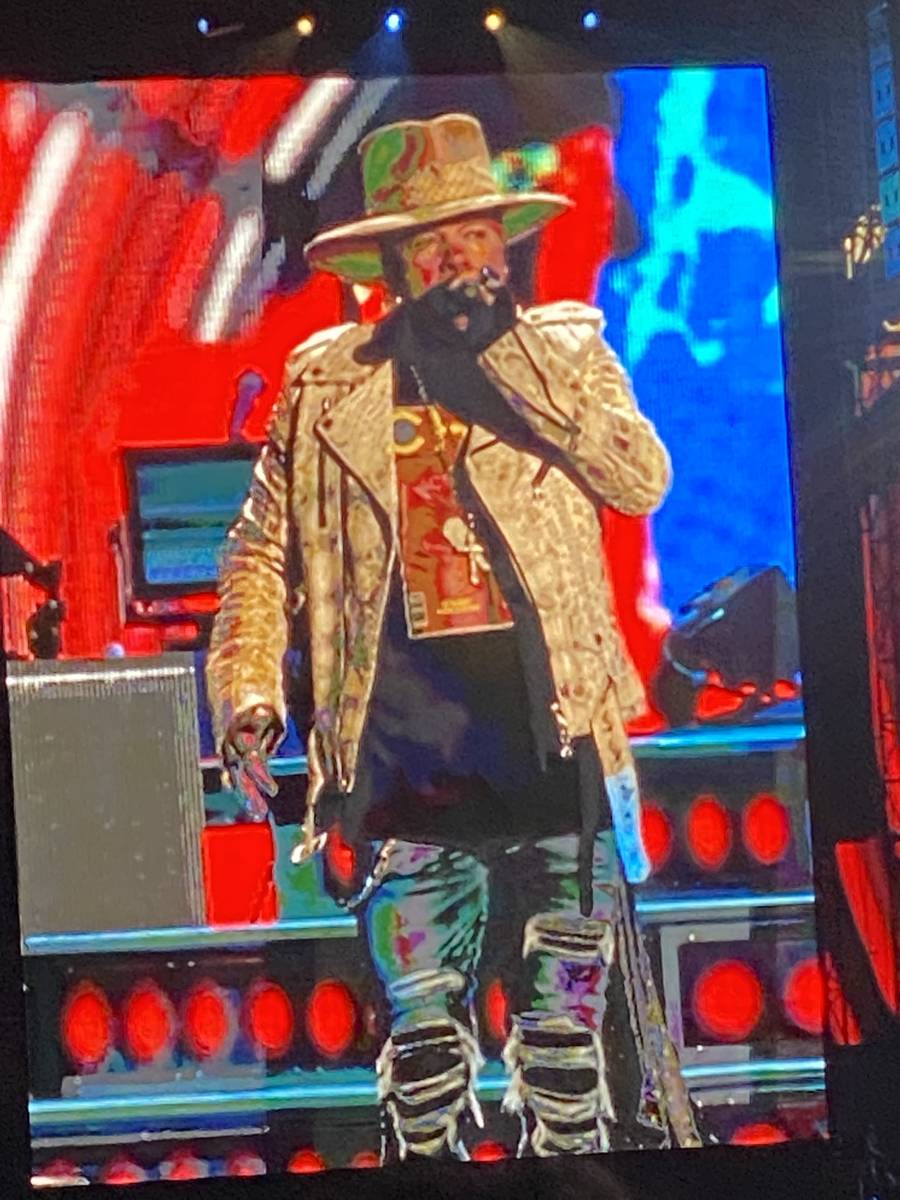 Axl Rose surveyed the surroundings like a friend admiring a new condo. “Nice place you’ve got here. Who’s your decorator?”

Actually, it’s Deco-Raider. We’re especially fond of the silver torch in the entry.

Aside from complimenting the decor, Rose didn’t speak much during the Guns N’ Roses concert Friday at Allegiant Stadium. It was a classic case of, “He didn’t need to,” with Slash taking off on his frequent guitar forays. Those lengthy solos are GNR’s show-within-a-show, a voluminous reminder of why the band is still an industry leader among touring acts.

Guns N’ Roses performed the first rock show ever in the stadium, coming at a time when Las Vegas is reopening in a pandemic and large shows are still comparatively scarce.

The city’s entertainment types have been commiserating about trends, the direction in which live performances are heading. We are moving to “intimate” and “immersive” experiences, terms that have already become trite, but are accurate.

But there is still room in this city for a vintage, stadium, hard-rock concert.

Never to be mistaken for casual or ambient musicians, GNR unleashed something of a microcosm of the band’s career. It was three hours of mayhem performed at high volume, a mass of sound and power, filled with familiar songs and images flashing from behind the stage. We had exploding roses, the band’s logo blowing up, a locomotive for “Nightrain” and a thunderstorm for “November Rain.”

The performance made fans rejoice, of course. GNR performed everything in its hit package, with “Mr. Brownstone,” “Welcome to the Jungle,” “It’s So Easy” and “Sweet Child O’Mine” in the mix. “Paradise City” was the finale. The band also covered “Live And Let Die,” and in what has become a new fan favorite, an acoustic version of Glen Campbell’s “Wichita Lineman” (Rose is a fan of the Jimmy Webb composition).

An inventive, well-paced set list. As for how it sounded, Slash’s solos nicely cut through the mix. But the sound was muddy and messy at times, while effective in other moments (such as the acoustic set). Generally, dialing in the sound quality for music shows is a high priority at Allegiant.

But there seemed no concerns onstage from Guns N’ Roses in its lid-lifting show. Having blown through Vegas, the band collected at the end for a group bow. They were fine house guests, welcome back to our place, anytime.

With the first rock experience Allegiant having hauled out, fans now know better what to prepare for. A couple of notes:

— Don’t try to bring a bag into the venue. If you do, you will be sent to a bag-check area and charged a $20 baby-sitting fee. Only clear bags and small non-clear bags are approved. Otherwise you will wait in lines before and after the event. Not worth it.

— Be ready to walk. I advise ride-sharing in and out, but for the GNR show and for Garth Brooks, I parked at Mandalay Bay/Delano and walked across Hacienda Avenue on what is now dubbed Stadium Walk to Allegiant. Really, MGM Resorts and the Raiders are presenting this jaunt as its own, strident tailgate party. There is now a water station set up at the midpoint, too. Use it.

— There is paid parking at Luxor, and even Excalibur, within walking distance of the stadium.. Of course, I showed up several hours early. The earlier the better at Allegiant.

Debbie Gibson and Joey McIntyre, who sold out their first weekend at The Summit Showroom (formerly Sands Showroom) at The Venetian, return Sept. 16-19.

Veteran Vegas producer Pat Caddick told us when “This is Christmas” was tabled for COVID in 2020 it would be back this holiday season. And, it is, as the all-star Christmas show is reset for Palazzo Theatre beginning Nov. 26. The show is to run at 7 p.m. (with some 3 p.m. matinees) through Dec. 26.

A live band and appearances by Santa and Scrooge are also planned. Tickets start at $69.95 (not including fees) are on sale at ticketmaster.com and venetianlasvegas.com beginning 10 a.m. Friday.

Award-winning actor and busy stand-up comic Jeremy Piven is headlining at Laugh Factory at Tropicana from Dec. 2-5. Not yet announced. His most recent Vegas show was in June at Notoriety Live at Neonopolis.

On the topic of Laugh Factory, the chain is donating 50 percent of its ticket sales at its show 8:30 p.m. Monday to the “Stand Up for Haiti” campaign. Shang Forbes (Shang is his stage name) is headlining, with Jon Lovitz also set to appear. Lovitz is also moving toward a weekday residency at the club.

The Review-Journal is owned by the family of Dr. Miriam Adelson, the majority shareholder of Las Vegas Sands Corp., which operates The Venetian and Palazzo.